Brian Henry has tattoos of signatures from Drew Brees to Gayle Benson.

At first glance, Brian Henry looks like a regular guy. He has been a Saints fan all his life, and working near the team’s facility on Airline Highway brings him even closer to his home team.

But when Henry takes off his shirt, you quickly realize his love for the Saints is more than skin deep; he’s got the signatures of 51 people with Saints affiliations tattooed on his back, arm and ribs.

The heavy hitters: Drew Brees, Gayle Benson, Alvin Kamara, Michael Thomas, Hall of Famer Rickey Jackson. But you can find Saints players from all eras scrawled across Henry’s back, some as fine as pen lines, others so thick you can barely make out the name.

“That one was Garrett Hartley,” Henry said pointing out the thickest signature on his back. “He said ‘I heard about you,’ and pulled out a huge chisel-tip marker. No pain, no gain, right?”

His quest started 10 years ago after someone broke into his house and stole all the signed memorabilia Henry collected after forming friendships with players who would come to the car shop where he worked. Upset about the robbery, he vented to former wide receiver Robert Meachem.

That started Henry’s quest, and Meachem was one of the first two signatures Henry got permanently inked.

In March of this year, a chance phone call tipped Henry off to a local Smoothie King Drew Brees was visiting, and after his signature, the floodgates opened.

“I’ve actually left four separate jobs in the middle of a shift because I heard (Brees) was signing autographs,” Henry laughed. “I finally got the autograph, and I was able to call work and tell them I was heading over here to get it tattooed, and I was back here within an hour and 15 minutes. I basically took a second lunch and skipped lunch the next day, but that didn’t matter. I got it.”

Not long after, Henry caught the attention of Gayle Benson during a training camp practice.

“I bumrushed the barricade and I said ‘Mrs. Benson, Mrs. Benson, would you please sign my back?!’” Henry said. “As she passed us up, she tapped on the guy’s shoulder and they stopped and she backed up and she looks and she goes, ‘Brian, right?’ and when she said it like that, it was tunnel vision. Nobody else was there. I was like, ‘Holy cow, she knew my first name!’ She goes, ‘Give me your number, I want to do it but I’m not going to do it in this weather and I want to make it a little more special for you.’”

Henry was invited back, where Mrs. Benson gave him a football signed by the entire team and a tour of the Saints’ facility.

“When that happened, I ran over here, and I was crying damn near on that one,” Henry said. “My grandmother died Jan. 15 of last year. Mrs. Benson wore the same perfume as my grandmother did. When she gave me that hug, it brought back those kinds of memories.”

“I had a vision. In fact, it was something I kept posting because I wanted it to take off,” Sgro said. “There’s a lot of tattoo artists out there. It’s always a privilege when someone decides to choose me out of everybody. Brian, (his tattoos are) just something I couldn’t wait to do, I’m humbled always.”

Sgro says the way the city and community have embraced Henry and his shop is different from other places he’s owned. 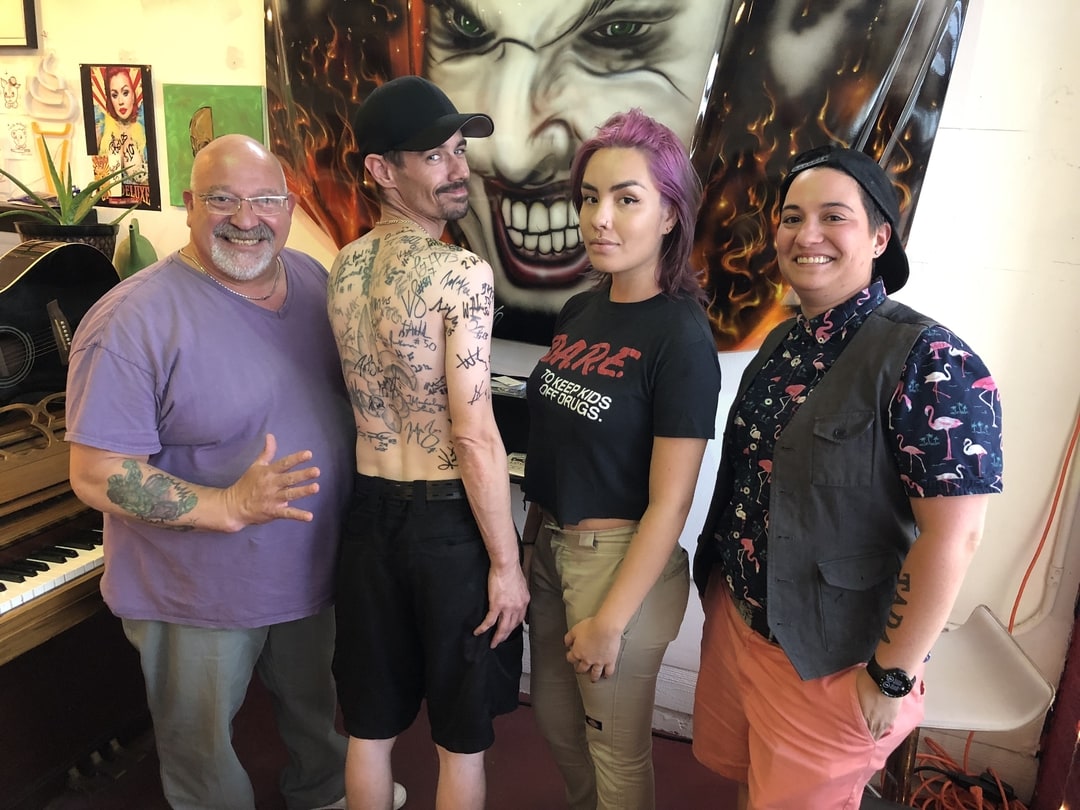 “I’ve only been here five years,” he said. “The plan was to always jump in with both feet. This is the one place I’ve been welcomed by the community. Half the stuff you see in here are gifts from my neighbors.”

Henry’s 50th signature was from Tre’Quan Smith, who helped Drew Brees break the NFL’s passing yards record. It only makes sense that Smith’s signature would push Henry over the threshold to apply for the Guinness World Record for most autographs tattooed on the body from one sports affiliation.

Does he ever plan on stopping?

“No, I’m not going to stop,” Henry said. “I want Sean Payton, Archie Manning, Tom Dempsey. I hear Steve Gleason has a way that he does it where his wife holds it in his hands so that he could sign, I would die for that one, or even just his approval for him to be the only one that it’s not his actual autograph on my back because of his situation.”