‘No official from the city, no police, not really even the news have ever recognized what he did.’

I’ve passed the mural so many times, coming off Elysian Fields and turning onto Claiborne Avenue to get onto the I-10 west ramp. The mural graces the side of a shotgun house. It shows a man with the words “Epic Journey” written above his face.

Who is this person? It was one of those lingering questions in my head, but I always seemed too busy to look into it. Then one day I got a message through my blog on Instagram, @BukuLocal, where I post a different mural every Monday. The message was short, but it struck me as fortuitous and sparked my interest even more. It included a picture of the mural and the message read, “You should write something about this one. The man in the mural died a hero. Check it out.”

The universe’s message was clear. I had to know the story, so I called up the family and set up a time to talk on a sweltering Sunday afternoon.

When I walked in, Leonard greeted me, and we sat down to talk. Leonard Grant, 35, described how he got his start making designs when he was 16, taking requests from his friends and creating custom shirts, backpacks, and shoes on his porch.

Shortly into our conversation, Leonard’s mother, Yvette Holden, walked into the shop that operates out of the shotgun house, and she picked up right where we left off. She described how she would get a call from Leonard when he was young and she knew exactly what he wanted: more paint.

“I’d be at Walmart, and he would call me. ‘Ma, I need this color. I need that color,’ and I’d be like ‘Oh, here we go.’” Yvette recounted this story as she looked at her son, chuckling as she told the details.

Leonard then went on to tell me more about how he eventually got to the point of opening up his business: “I didn’t pick up T-shirts again until my little brother died.” 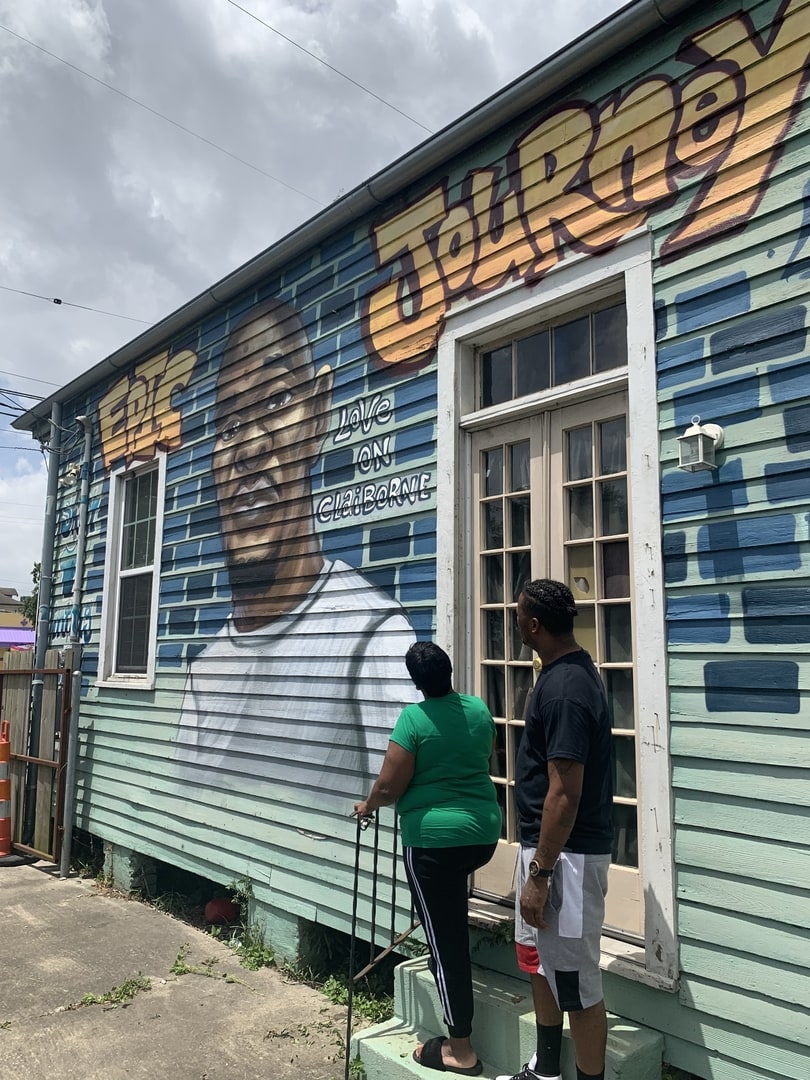 Our conversation turned from the business to his brother, Ellijah Grant, the man on the mural. Leonard and his mother then begin piecing together the story of how Ellijah was watching the Saints’ overtime win against the Falcons on Nov. 13th, 2011. Ellijah, who they said was known for his smile, kind spirit, and love of children, was standing outside during a commercial break when a car rolled by and gunfire sprayed into the crowd. Elijah saw three children in the line of fire, so he valiantly shielded them with his body, suffering multiple gunshot wounds in the process and losing his life, Leonard and his mother explained.

“I know he saved those kids’ lives because they were grazed by the bullets,” said Leonard. “But to this day, no official from the city, no police, not really even the news, have ever recognized what he did. So I wanted to do something that would help his legacy live on.”

When Leonard talks about his brother, he is selective with the words he chooses. He doesn’t like using words such as “killed’, “murdered”, or “died” because he sees the spirit of his brother and his impact as still very much alive. The mural, which was completed by Henry Lipkis, purposefully leaves out the phrase ‘Rest in Peace’ and the year Ellijah lost his life. Instead, the mural simply includes the words “Love on Claiborne.”

Leonard explained to me why he wanted those words included on the mural, “We’re gonna give the love that he gave, and we’re gonna share that with everyone through our business on Claiborne.”

Leonard always thought he would open his business with his brother, but instead, Leonard and his wife, Larrielle Grant, opened Epic Journey to honor him. The quality of work has earned him a loyal following of proud parents, who order shirts with their child’s picture on them for the big game, social clubs preparing for second-line parades, and bachelorette parties assembling before taking on the city.

As we wrapped up the interview, we saw a group of people stopping to take a picture in front of the Soulja Slim mural across the street.

“I see this all time,” said Leonard. “People always stop and pay their respects; they know the story behind the face. I want people to see Ellijah’s picture and remember him. I want them to know that he died and lives on as a hero.”