Costumes, pumpkins, candy: Halloween traditions can be traced back thousands of years

Halloween has been around a lot longer than many of us might think: long before some swindler duped the public into believing candy corn is worth eating, and — believe it or not — long before the first puppy was stripped of its dignity and placed in a fish costume.

So many of the traditions we enjoy on these October days feel like they must have been dreamt up in modern times. But trick-or-treating, ghouls, ghosts and even jack-o’lanterns can all be traced back hundreds — sometimes thousands — of years.

Let’s take a look at where the Halloween rituals we see around New Orleans actually got their start!

What’s the deal with all this monster imagery on Halloween? It’s all over our TVs, in the movies and inspiring our costumes. Heck, we even have a Monster Mash, which — I’ve heard — is a graveyard smash.

Well, it turns out ghouls were a part of this time of the year for at least 2,500 years when the Celts arrived in Ireland — as well as the rest of the British Isles — where they celebrated their harvest holiday, Samhain (pronounced “sow-win”). It’s possible the tradition even began 2,500 years before THAT in the Mound of Hostages on the Hill of Tara.

The Celts celebrated harvest festivals in between the solstices and equinoxes, and Samhain — which was celebrated at approximately the same time as Halloween currently is — took place between the fall equinox (the end of summer), and the winter solstice (the start of winter).

Samhain — celebrated on Nov. 1 — was the Celtic new year, commemorating the death of the old year and the start of the new one. The Celts began their days at sundown, which is how All Hallow’s Eve on Oct. 31 became so important. The holiday separated the light part of the year (literally, when there was more sunlight each day) and the darker half of the year as winter approached, and the Celts believed this was the day when the separation of the worlds between the living (light) and the dead (dark) softened. Ghosts roamed the countryside, destroying crops and meddling in the affairs of we mortals.

They believed the Dullahan rode flame-eyed horses and carried their heads under their arms. You can see a play about one such man in the Besthoff Sculpture Garden for the next few weeks! 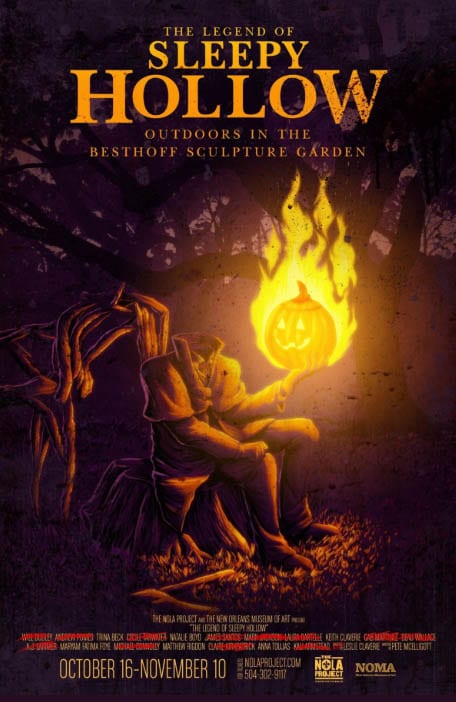 Trick or Treat: The history of costumes & candy

Okay, so now we know why we know where all this monster imagery came from, but why do we dress up at all? And, more curiously, why — once we’ve gotten into costume — do we send our precious children up and down St. Charles Avenue, knocking on strangers’ doors and begging for candy?

Well, remember, Samhain was a harvest holiday. Celts brought cattle back from summer pastures, slaughtered their livestock, and removed crops from the earth (again, think of the death of the year).

With all that food suddenly available, naturally, there was a feast. But, the Celts weren’t the only ones who wanted in. They believed nefarious fairies (nefaries?) crossed into the world of the living during Samhain and would torment families who didn’t satisfy them with gifts from the harvest. A shape-shifting creature called Pukah went from property to property, collecting offerings.

Costumes began to be associated with this time of year because to avoid being kidnapped and taken to the Otherworld by fairies the Celts disguised themselves as animals and monsters.

As Christianity spread across Europe during the first 500 years A.D., the church, realizing it couldn’t effectively suppress pagan beliefs, decided to build holidays around them, often using pagan symbology for their own purposes.

So it’s no surprise that, by at least the 1400s — in a tradition called “mumming” — costumed Irish, Scottish and Welsh went from house to house, reciting prayer, verse or songs in exchange for soul cakes or other treats. It’s unclear whether they were pretending to be the spirits to appease them, to protect themselves from them, or both, but it was certainly related!

Mumming has remained popular in Celtic countries through the present day, but how did it find its way to the United States?

For a while, the conservative Puritans of America made sure those traditions didn’t make it across the Atlantic. That all changed, however — in the mid-19th century — when millions of Irish fled disastrous potato famines in their homeland. New Orleans — much more Catholic than the Northeast — attracted tens of thousands of those immigrants and they brought their own holidays with them.

Allhallow’s Eve was one of those holidays, and many of the traditions we celebrate here today were cultivated over thousands of years and brought here by those immigrants.

Even jack-o’lanterns have a longer history than meets the eye. Samhain is a harvest feast, and humans have been growing gourds for 10,000 years. The Maori of Polynesia have been making lamps out of gourds for 700 years! In Ireland, the myth of Stingy Jack — the story of a drunkard who roamed the countryside with only a hollowed-out turnip as a lantern — originated between three and four centuries ago. On Allhallows’ Day, the Irish made lanterns out of turnips of their own, hoping the fire — like the bonfires of the ancient Celts — would repel evil spirits and guide those of their ancestors back home.

Over the years, they began carving faces into those illuminated turnips to scare passersby, and — when they arrived in America — they discovered the task was much easier with the indigenous pumpkin!

An Apple a Samhain Keeps the Old Maid Away

Surely you’ve bobbed for apples at some point in your childhood! Or maybe you were given the unenviable task of trying to use your teeth to grab hold of said apple while it was attached to a string that was fastened to the ceiling?

Where in the world did these traditions come from?!

The answer is, once again, the British Isles!

By the first century A.D., the Roman Empire had conquered the Celts in England, Wales and (sometimes) Scotland. Celtic traditions still existed in these places (and Ireland), but were often being merged with those of other cultures. The Romans, for example, brought apple trees with them — their representation of Pomona, the goddess of plenty — and thought it the perfect addition to the harvest feast of Samhain.

Since the holiday was also a New Years celebration, these early inhabitants of Britain saw it as a time to tell fortunes for the coming year and beyond, oftentimes pertaining to romance. Each year, young unmarried people would try to bite into an apple floating in water or hanging from a string, and the first person to bite into the apple would be the next one to marry.

Now, just because you don’t associate apples with romance doesn’t mean earlier New Orleanians didn’t! In fact, the archives of New Orleans’ newspapers throughout the late 19th and early 20th centuries are filled with timely stories of young locals believing just that.

“Halloween is the time for all girls to get busy and find out who their true loves are,” explains one passage from an Oct. 30, 1927, New Orleans States column. “Now there are various ways of going about procuring this information,” the article continues. “Throw long apple peelings over your shoulder to the floor and you will find that it forms the initial of the last name of your future husband when it settles on the floor.”

Other articles tell of how young New Orleanians would carve the names of their desired into an apple and place it into a tub filled with water alongside similar apples from other party-goers. Each participant would dunk their head and try to grab an apple with their teeth, and whoever’s name was on the fruit they got was predicted to be their future betrothed!

Trying to bite apples from strings, looking into a mirror at midnight while holding a candle (or eating an apple) and placing an apple under your pillow were all ways to predict future love enjoyed by both 1st century occupants of the British Isles as well as more contemporary New Orleanians. As we wrap up this Halloween season, maybe we can find a little extra joy in knowing these traditions we love can be traced back across an ocean, thousands of years ago.