From brunch to king cake, the trip to this spot was always worth it.

On Monday, June 8, owners of Marigny staple New Orleans Cake Café and Bakery announced, after 13 years, they are closing their doors. In a Facebook post, owners Steve and Becky Himelfarb noted that the COVID-19 pandemic marked a new beginning for the restaurant industry and noted that with their lease coming to an end, and with fresh prospects in sight, they see it as time to move on.

“The pandemic has provided unprecedented challenges to restaurateurs — one that we believe can be overcome,” they said. “Just as we saw after the storm, there will be new and exciting opportunities to build a better system.”

The news of the closing of Cake Café and Bakery hit neighbors in the Marigny and surrounding areas hard. Many lamented the loss of the quaint café where the owners would welcome them with a smile and would always have time for a quick chat on a cheerful New Orleans morning.

‘We would make special trips’

For many, Cake Café and Bakery had become a regular stop, even when they had moved out of the Marigny.

“We lived a block-ish from Cake Café for our first three years as New Orleanians and ate there pretty much every weekend,” Leitzinger said. “[We] had brunch there the day after my wedding. They also hosted a really cool evening Vietnamese restaurant years back — some of the best spring rolls”

She continued, “Since moving to Mid-City, we would make special trips for the crab cakes and fried seafood (since they used Old Bay – special memories from Virginia) and for their king cake. The cupcake add-on for a dollar was a nice special treat- we’ll miss that.”

Marigny resident Rob Olecki, often stopped into the cafe for breakfast or a tasty pastry. 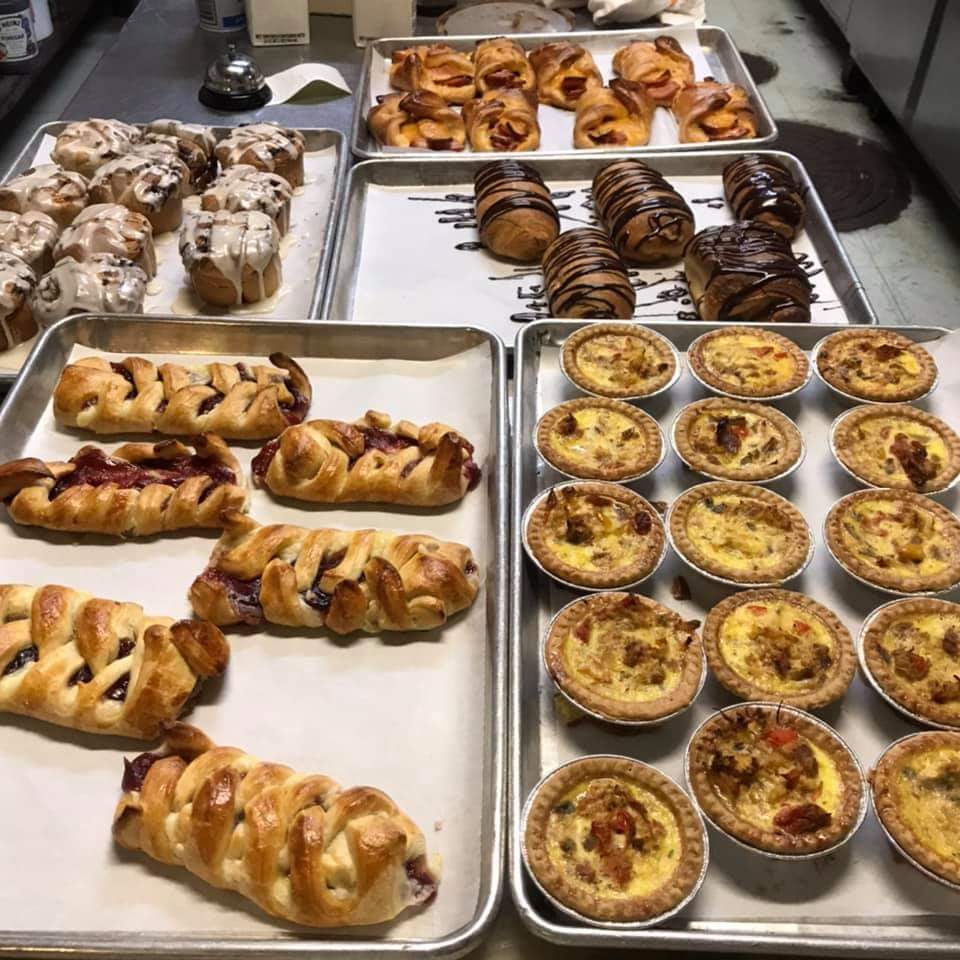 “Their breakfast was awesome and the service was so friendly. The cupcakes that you got for a dollar was always a nice treat,” Olecki said. “[It was a] great neighborhood spot; we always took company here. We’re truly going to miss them and I wish them nothing but the best.”

Gentilly resident Tim Lopez made special trips to the corner of Chartres and Spain to enjoy breakfast at the café.

“When we did go out for breakfast this was a top choice and never a disappointment, even when there was a wait. [They had the] best French toast ever,” Lopez said. “We loved the staff and always had a great experience, plus when we took friends they were always blown away too. This one will really be missed a lot and I wish we could have visited even more than we did.”

Writer and producer Angelique Dyer, who previously wrote about Cake Café and Bakery for Very Local New Orleans’ “Brunchfaced” series, is sad to see the café close and says she will miss it. She enjoyed brunch and dessert at the cozy spot.

“It was a place where everyone was so nice,” she said. “When I went for brunch, it was the first time I realized I liked eggs- I just liked them fried hard. It was also the first place where I tried catfish and grits.”

Dyer describes Cake Café and Bakery as a neighborhood place where she once took herself on a date to enjoy a slice of king cake and take in the vibe of the neighborhood.

Regular customer, Katie Duym, recalls a café that was more like a family. Cake Café and Bakery was a part of she and her wife’s lives and she has fond memories of the eatery.

“Cake Café has always been a home away from home,” Duym shared. “On weekend mornings we’d meander through the Marigny and make our way over. We were greeted by smiling faces and prompt service.”

Duym also described how much work Steve and Becky did to give back to their community.

“They are there more than to make money- [they donated] day-old pastries and breads to a local non-profit, Project Lazarus,” she said. “We’re so proud of the work they did to support the local hospitals by making breakfasts during the COVID closure thanks to Krewe of Red Beans.”

But that king cake…

For every celebration in Duym’s life, Cake Café and Bakery seemed to be ever-present.

“We ordered our wedding day desserts and every single guest raved,” she said. “My Mother’s Day present was a Raspberry Cream Cheese king cake. We still have a container of cupcakes in our freezer and plan to make them last.”

Speaking of king cakes, the annual treat is one of the delectable delights that topped local dessert lists. raspberry cream cheese, pecan cream cheese and a traditional offering were among the favorites. However, it was Cake Café’s Apple Goat Cheese king cake that put them on the map. 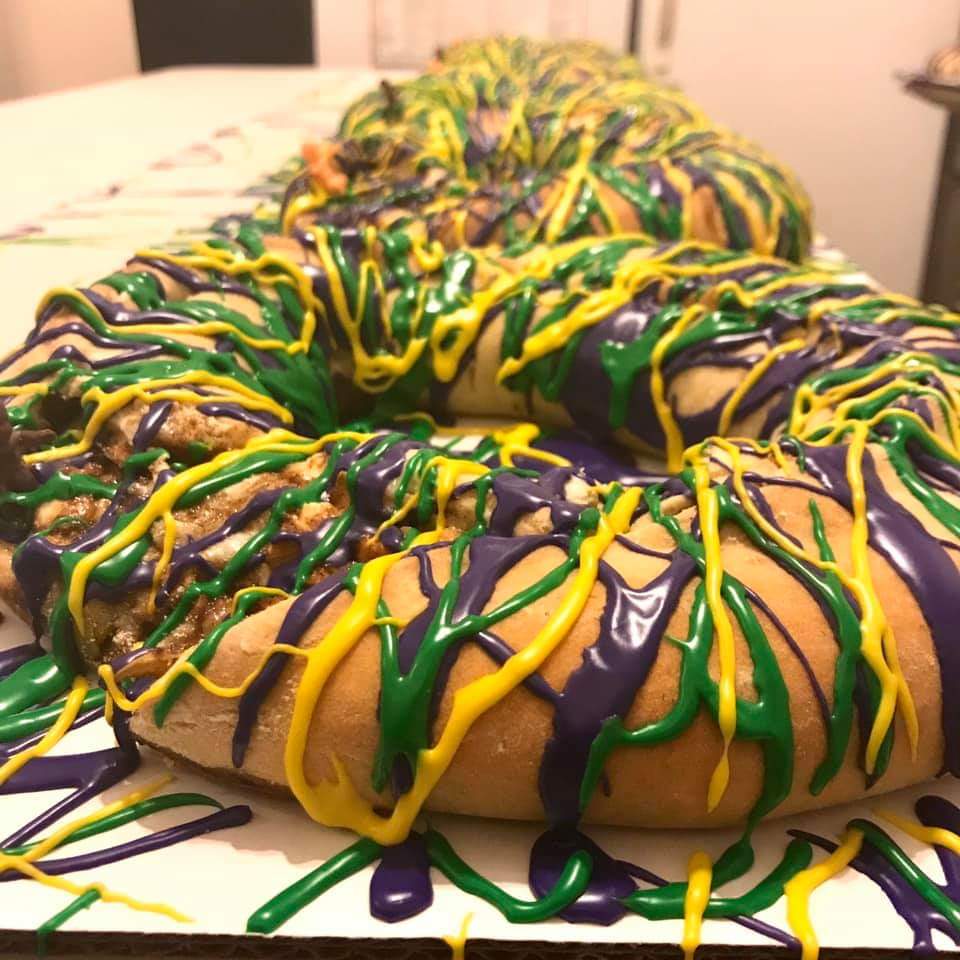 Musician Jonathan Pretus recalls traveling from Broadmoor several times during Carnival season to stock up on the favorite.

“Their apple goat cheese king cake was hands down my favorite king cake,” Pretus said.  “I sing its praises annually, and always looked forward to bringing it to people who’d never tried it, just to watch them marvel at how pretty it was, and then how delicious it was.”

I reached out to owner Steve Himelfarb and asked him if there was a possibility that he would be offering the café’s delicious king cakes at a future pop-up. He was tentative but hopeful.

Himelfarb said, “I do want to and am looking into all possibilities.  I will definitely make sure people are aware of it, should it come together.”

The café will continue to serve their beloved pastries, donuts, breakfast and sandwiches, via take-out, until their last day of operation on June 28.  Hours are Thursday through Sunday, from 8 a.m. to 1 p.m.