Toups Meatery, Central City BBQ, Hippie Kitchen are just a few places you may have seen his works of art 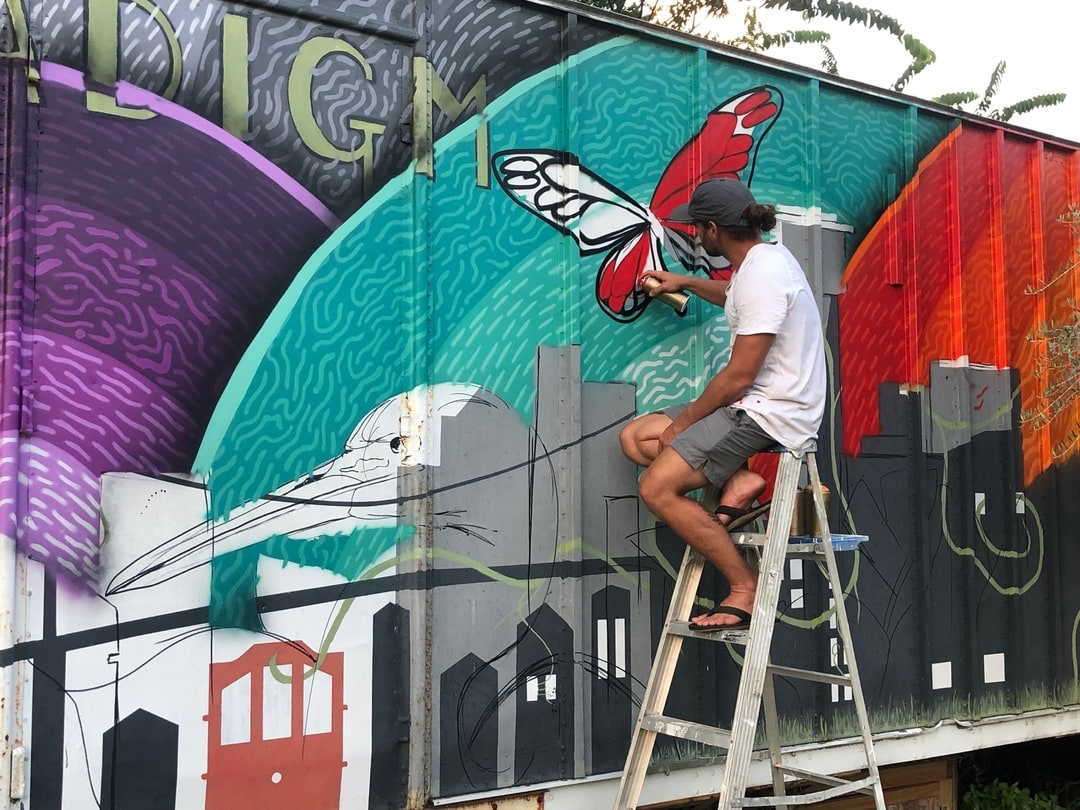 Zac Maras lovingly paints the animals that surround and inspire him in the Louisiana countryside. His vibrant murals, spreading their way across the walls of New Orleans, heavily feature blue herons, egrets, and roseate spoonbills. Goats, gators, pigs, chickens, frogs, foxes, butterflies, and crawfish leap out in front of geometric backgrounds.

“It’s a beneficial thing to do, to paint on different surfaces,” Maras said while perched on a high ladder, adding detail to a wing of the second butterfly on his fourth Paradigm Gardens mural. “Some surfaces are a nightmare. If you paint on really rough, corrugated tin [like many of my pieces have been on] and then your next job is a flat wall, you really appreciate it. Some walls make it impossible to get the level of detail that you want but with mural work, you can create as big as you need, to accommodate. I still never pass up a good surface when it comes along.”

Good or bad, there is no surface Maras won’t conquer. A tour through his Instagram proves that. He’s painted the inside and outside of restaurants, benches, sheds, doors, tractor-trailers, school buses, ambulances, kayaks, guitars, shipping containers, and gardening pots.

“Each of these new areas teaches me to work within the curves and the different angles,” he said. “When I started making art, I did really intricate designs with black and white, pen and ink, designs weaving in and out of each other. The control was nice but ever since I found the spray cans and my love for bigger stuff, I can’t really go back to doing small work.”

Based on Maras’ love of animals, I falsely assumed that he was a vegan.

“No. I’m a big meat eater,” he corrected me. I should have known better, as he’s been making somewhat of a name for himself, painting restaurants all around town.

“My first big mural in the city was [the iconic, chaotic, colorful pig logo] for Central City BBQ,” he said. “The owner, Aaron Burgau, was a chef with my dad back in the day. A while back, I did a full building wraparound mural for Hippie Kitchen. Nomiya, a ramen place on Magazine Street– that was an early one of mine: I painted an octopus, bamboo, and some geometric patterns on the opposite wall. A recent large project of mine was Toups Meatery– that one wraps all the way around the two street front facing walls and above the awning.

Seeing animals as both friends and food is somewhat of a birthright for Maras, who grew up on his family farm, with an influential chef father. 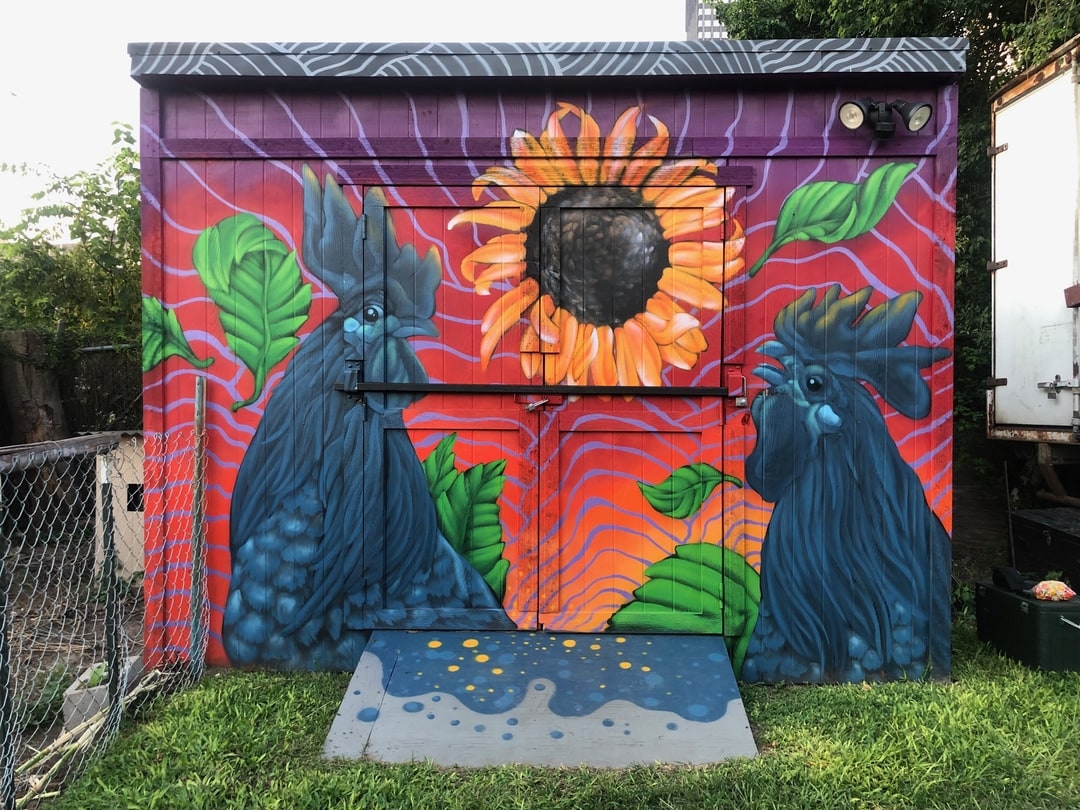 “My dad [Gerard Maras] had a restaurant in the French Quarter at the time, called Gerard’s,” he said. “His menus were based on all the seasonal fresh produce from our house. He’s super well versed in the Creole French cooking school so, any dish in that category he makes is right up my alley: all of the pan-seared seafood, his chicken andouille gumbo. He taught me how to cook. He’s very patient. He’s always cooking with my kids. It’s fun to watch. I still find myself hunting for ingredients. Just last weekend, I was out in a mosquito infested creek looking for chanterelle mushrooms.”

Terrified and excited to know what else Zac might have seen on his hand-painted kayak adventures through the Atchafalaya, I was not disappointed by his answer, when I asked.

“I see a lot of blue herons on the waterways of Louisiana,” he said. “You can find them all over the state. They’re big and ornate. Spoonbills are ridiculously cool. They’re bright pink and they’ve got this speckled, decorative dot work around their beaks. Alien looking bird. I get out in the woods as much as I possibly can. That’s my biggest inspiration. I just like being outdoors and painting what I see. I like to get bright and make it seem like a fantasy world but with real animals. I’m usually pretty accurate in my depictions but sometimes I’ll paint a bird with unusual colors just to be extra vibrant.”

The most unusual creature he described running into on his journeys was the giant soft shell turtle.

“You don’t see them too often,” he said. “They’re really fast. I came up on one while I was kayaking in Mississippi once and it was probably about 3 feet. Their necks are [ridiculously] long. Such a prehistoric creature.”

After a small break to check in on his kids, who were gleefully shrieking to hear from him, Zac went on to tell me about artists he’s worked with and artists he’d like to.

“I recently did a collaboration with Mr. Balloonhands and Dirty Funq, a big piece on Broad and Washington,” Maras said. “Our idea was to find a wall and paint something uplifting to donate to the community. I think we accomplished it. We got a lot of good feedback. I was super happy with the final outcome. I loved working with those two and there’s a ton of artists who inspire me. There’s Ceaux Buckley, he’s got a bunch of different outlets. He does tattoos, big walls, spray paint, a lot of his canvases are turned diagonally which adds a really cool dimension to his work. There’s B-Mike. I think everybody knows who he is. The mere scale of his work is so impressive. Mike Guidry does really cool surrealism, pelicans and a lot of Napoleon pieces. One piece that inspired me from the get go was Robert Dafford’s huge clarinet painted on the side of the Holiday Inn in the CBD.”

When I asked about what music he enjoys, his answer was equally detailed and diverse.

“I listen to a variety of things,” he explained. “Since I’m a musician, I draw influence from all sorts of areas: old fingerstyle blues like Mississippi John Hurt, to Kumbia, to Afrobeat or Rap, even old country like Lefty Frizzell and Ernest Tubb. One of my favorite places to go, when you could actually go places, was Circle Bar, whenever The Iguanas played on Wednesday nights. That was my place. That’s where I loved to go see music live. They had the perfect mix of Rock n’ Roll and funk and blues. It’s one of my happy places. Then there’s Anders Osborne, the brass bands, Little Freddie King, Glen David Andrews, so many amazing artists in this town.” 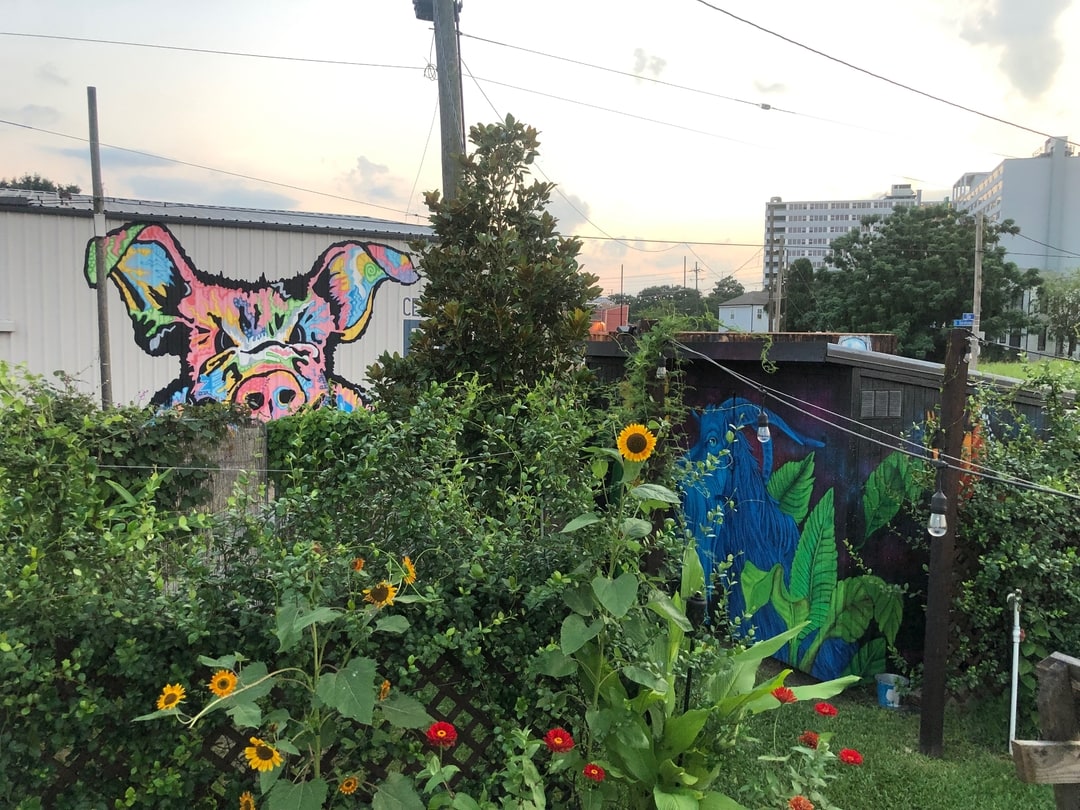 “It was amazing,” he said. “It was an outdoor concert, so people had the opportunity to sit a good distance apart. It was a landing concert in Covington, Louisiana. We played, then it was Fermin and the Meringue 4. They were incredible. It was amazing to see live music again.”