His distinctive, cartoon-inspired style is hard to miss.

Published on Wednesday, May 27th, 2020
by Sabrina Stone

When I jogged over to Frenchmen Street to interview the artist known as Mr. Balloonhands, I had no idea what a challenge I was stepping up to. He was four hours into his third repaint of a mural he had lovingly made for his mom and by the time we were done, another three hours had passed. Respecting the work, I found myself standing with my recorder up in the air, while he painted the top petals of the flower from a ladder. Between my questions, he’d answer the questions of passersby, respond to their words of appreciation, or speak to other artists, who stopped by to add input and encouragement.

VLNOLA: How do you choose the locations for your work?

Mr. Balloonhands: “I usually just like to paint in bandos (abandoned buildings) with my homies. Sometimes I have a wall in mind but most times I just go with the flow and find whatever looks proper for the piece I want to paint. A lot of my paintings are commissioned pieces for business or homes.”

Do you have a dream location for a future mural?

“Actually, Frenchmen Street was always on the bucket list. When I first moved into New Orleans, from further out in the state, this was the place I’d go to all the time. So, it’s funny, you’re asking me that question while I’m standing here making it.”

Mr. Balloonhands has a distinctive, space-themed, bright-colored, cartoon-inspired style that’s hard to miss. Whether he’s painting giant alien worms, celestial bodies, all-seeing flowers or fortune cookies with choice words of advice, you’ll recognize his hand. The Louisiana artist may choose to keep his identity a secret but you can get to know him through his influences and through his work, which has cropped up everywhere nowadays.

Tell me about your art origins and why you chose spray paint.

“I started drawing around 2012 and only did sharpie or pen doodles in old notebooks at first, creating weird little characters. I began to experiment with watercolor, markers and acrylic.  My skater friends who were also graffiti writers eventually convinced me to go paint with them a few times. I fell in love with spray painting and I haven’t stopped since.”

What was the first mural that you remember painting?

“It was at Sailor’s Cross Tattoo with a bunch of my homies, people I looked up to a lot, so it was cool to be able to paint something big with them. I did it with Fat Kids, TARD, PAWS and MRSA. We all did our own thing but we incorporated the same colors and went with whatever we felt.”

At this point, my recording device was little more than a prop. We had shouting and music coming at us from both sides. Construction workers one block to the north were blasting hair metal and the radios from the trucks and bikes slowing down to check out the “Drive Through Gallery” were far louder than our voices. We soldiered on. 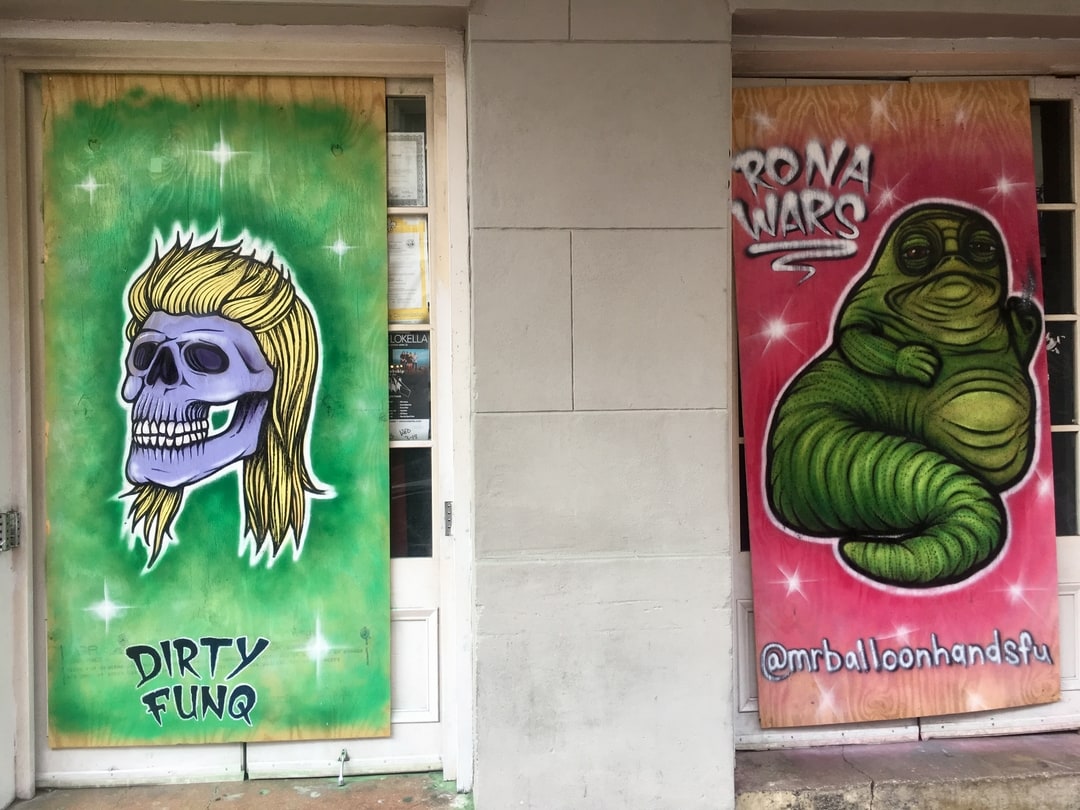 How often do you paint?

“I’ve been painting every day for a lot of days now. I’ve lost count. We’re in what I like to call ‘Quarantimes.’ I did a painting about it, actually, outside of Deanie’s Seafood, of the moon overlapping the sun. My days and nights have been so mixed it all seems like a blur.”

I notice you have music on while you work. What are a few bands you like to listen to while painting?

“Wild Nothing, Diiv, Sales, No Vacation, Allah-Las, Beach Fossils and one of my favorites, Caddywhompus who’s local to NOLA. Another band close to my heart is The Iceman Special. I’ve painted at a lot of their performances and it’s always full of so much positive energy. I miss all of that, so I’ve been listening to them a lot while painting walls during quarantine, acting like I’m live painting at one of their shows, dancing around and having fun with the paint.”

Who are a few local artists who you look up to?

“So many: Houzenga, Ceaux, Marc Fresh, KEN82 is a very talented painter and tattoo artist who drops a lot of knowledge my way regarding not just art, but also life lessons and I’m thankful for him. DVOTE, SWAN, TARD is a Nola OG graffiti artist who specializes in characters, which is my favorite. Terry IFERN Owens has been killing it in this category for so many years and it’s pretty inspiring. He’s a very close friend of mine who I looked up to way before I ever started painting, Hugo Gyrl, Josey White, Matt Foreman. Oh, Skylar Fein, Saul Cruthirds, Lionel Milton.”

When I interviewed Josh Wingerter, who started the “Drive Through Gallery,” we spoke about tagging and how it represents the natural evolution of street art. This particular board, outside of Three Muses, has seen an unusually swift series of changes. In less than two weeks, it’s gone from a stencil of Louis Armstrong eating spaghetti, to a tag-enhanced version, to an alien flower, to a cat-faced version, back to a renewed flower, to a mess of splashed paint, back to a flower again.

Josh Wingerter had already painted a piece on the board you’re painting on as we speak, right?

“He did but I wanted to do a gift for my mother, so I asked [Sophie Lee], the owner of Three Muses and Josh if I could paint it there, to which they both said “Yes.” When it was done, I told my mom to come check out the “Drive Through Gallery” on Frenchmen for Mother’s Day and surprised her with the gift. Someone actually tagged [a cat face over the mural] earlier that day but I quickly fixed it so I could get my photo with my mother in front of it.”

Then it got fully vandalized with a whole bottle full of white paint.

“Yep. Apparently, some angry ‘artist’ splashed a bunch of paint over a lot of the plywood art on Frenchmen Street. What he did was wack but I try not to let these situations get to me. Sophie from Three Muses wanted to keep the painting so I offered to fix it for her.”

But you chose to leave some of the paint splatters, instead of repainting it entirely.

“Yeah. Paint will cover paint and I could have fixed the whole thing but I’m not going to. I’m going to fix the flower and leave the white splashes in the background. It’s just a part of it now.  It’s regrown.” 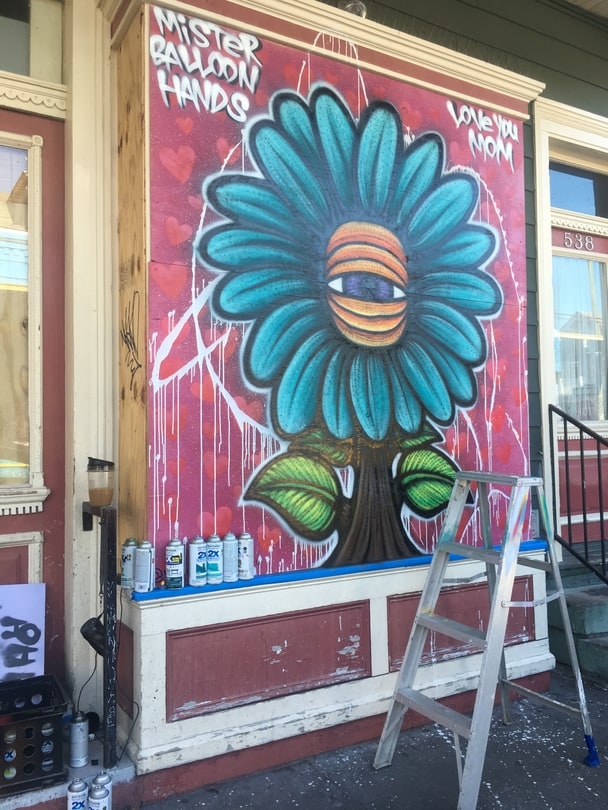