Marigny mainstay Allways Lounge & Cabaret has provided live entertainment and a safe space for male-identifying, female-identifying, POC, and queer performers for 11 years. Burlesque, comedy shows, drag shows, and more, are performed here regularly. When the COVID-19 pandemic shut the doors on Allways’ live shows, owner Zalia Beville knew that she would have to come up with an idea to keep the good times rolling.

Beville rents the space, which formerly housed a line dancing bar and theater called Cowpokes, and decided to bring her own brand of entertainment to the venue and the inclusive space developed over time. 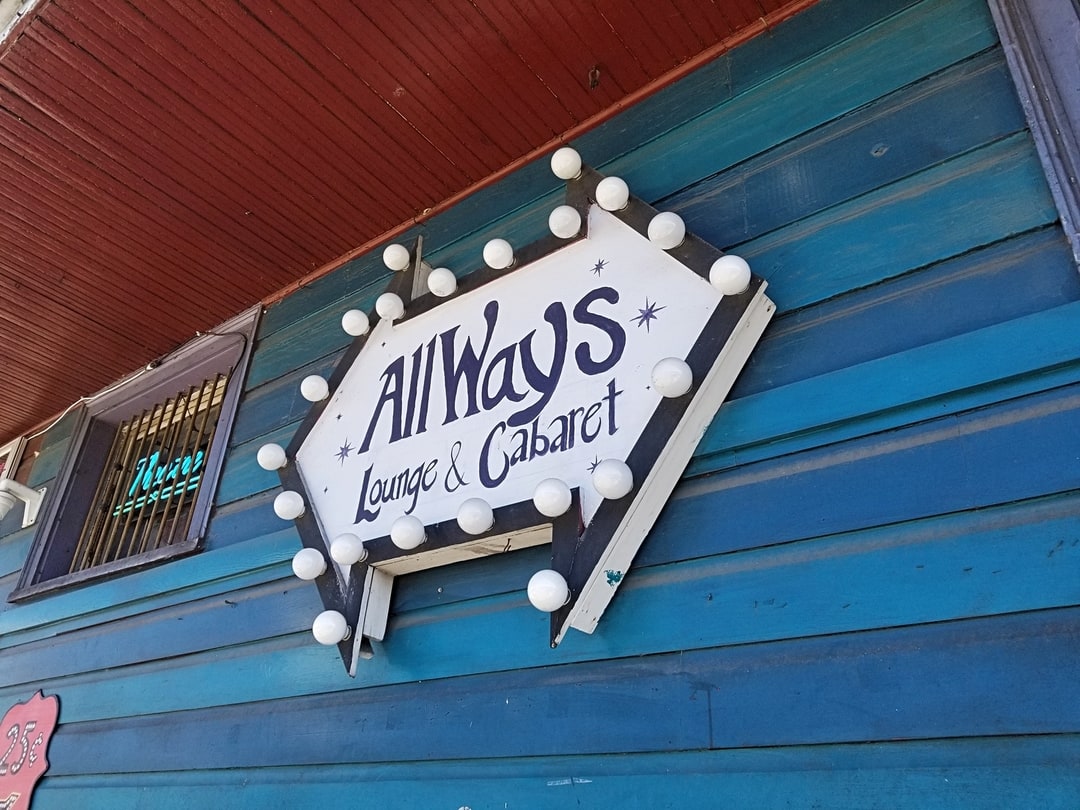 “My original partner and I basically just brought everything to it that we loved; all different kinds of people and different kinds of theatre and cabaret,” she said. “It grew rather organically over the last 11 years; I’ve been so blessed to be surrounded by incredible performers and friends that have made the space what it is.”

A window with a view

The old saying is, “The show must go on!” and when faced with the idea of possibly having to close indefinitely due to the pandemic, Beville had an idea to offer a different kind of show — with an old-time twist.

Inspired by the old-style peep show booths, in which dancers would perform a striptease in a window to the delight of customers, Peepshow Daiquiri has featured local burlesque performers such as Bella Blue, Remy Dee, and Angie Z in the window of the Allways Lounge.

For $5, customers purchase a token and are entertained by a dancer in a window that faces St. Claude, but is covered by a curtain. The show is “PG-13” and the dancer performs to one song. Cocktail daiquiris are also available for $10 and are served in a souvenir “peepshow” cup and through the safety of a window facing the street. 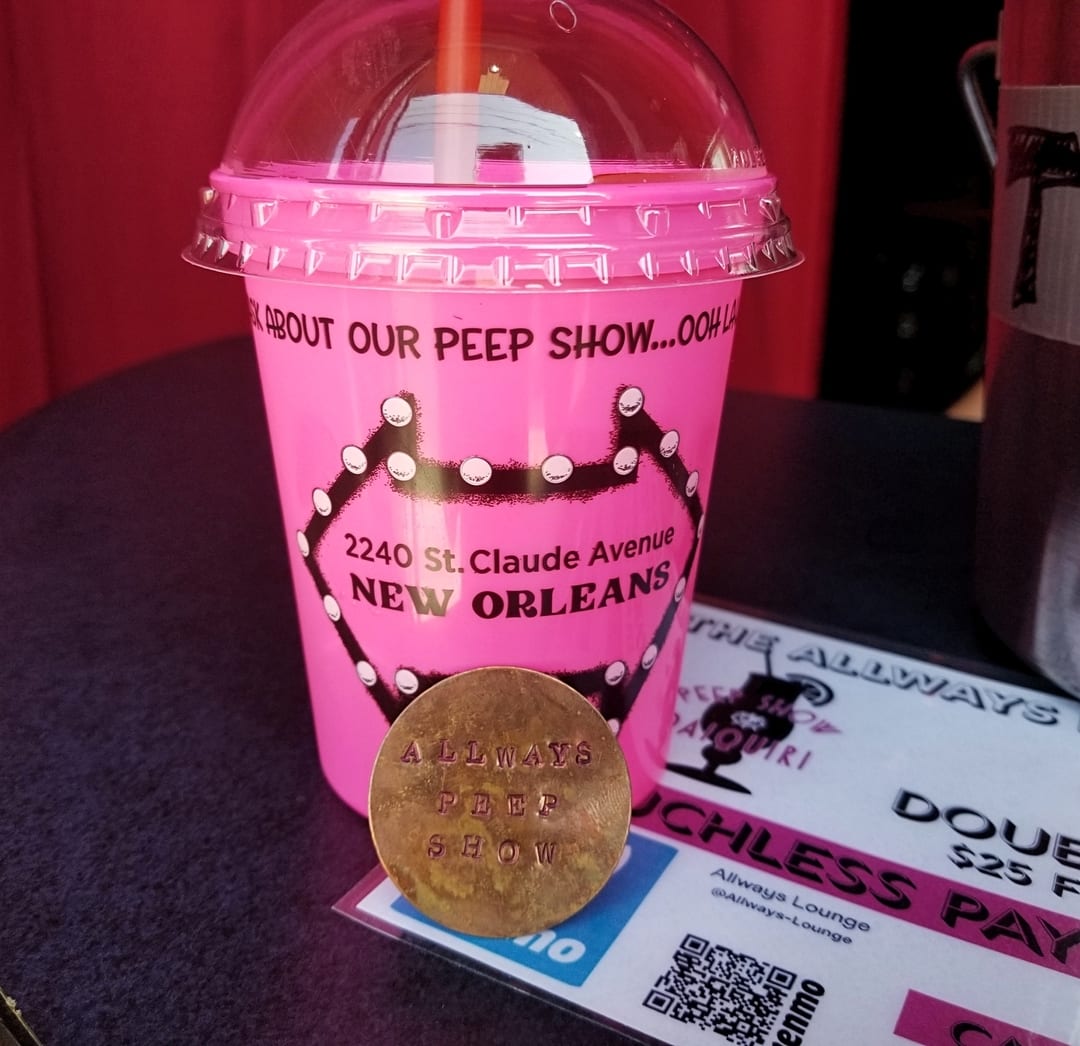 The lounge staff wears masks and masks are encouraged for patrons, and the slot where peepshow tokens and dancer tips are dropped is sanitized, by staff, between customers.

Beville thought that the peep show window would be the perfect fit for her club and would provide much-needed entertainment in a time where live entertainment isn’t readily available.

She explained, “I’m a huge fan of old school burlesque vaudeville and boardwalk antics. We have always had this window covered up that’s right behind the stage going to the corner sidewalk and I wanted to make something where the patrons could peek in and see a show. When the pandemic arose, it gave my brain an opportunity to fulfill some of these fun visions…it’s like a little time hop.”

A little show, a big difference

What was originally created as a fun diversion has become more. Beville sees the peep show as a way to raise money for Black Lives Matter and POC trans youth in New Orleans. Most recently, proceeds from the peep show have gone towards raising money for New Orleans Workers Group, which has helped organize BLM protests and works continuously on funding better living conditions and infrastructure for the black community, and Breakout, which supports POC trans youth in New Orleans by funding legal fees, and gives them a community and a sense of safety.

“It’s important for us to support at this time, and all times, the Black Lives Matter movement,” Beville said. “It’s an ongoing struggle and we chose these two organizations in order to have a focus on two different sides of the issue.”

The peep show has been a hit on St. Claude and has become a regular afternoon stop for many local burlesque fans. Beville hopes to possibly continue with the Peepshow, even after regular shows are allowed to resume.

“It began as something to try and scrape together money for our rent while we are closed, but I love the idea and it’s running pretty smoothly,” she said. “I’ve always wanted to be open during the afternoon, but it just doesn’t make sense with our space being used for rehearsals; this could be kind of perfect.  I would love for it to be a regular [afternoon] occurrence, and then fling open the doors at six for our regular shows.”

Beville has loved giving her performers the opportunity to hit the (window) stage and see their fans, and neighbors have enjoyed the afternoon shows as well.

“I’ve had a lot of positive feedback from the performers that we have had in the peep show during this time; many say they didn’t realize how much they miss performing and the smell of the Allways until they got there,” she said. “One of my main goals in doing this is more as a morale booster for our community. It’s not a big profit event, but it’s sustainable and I love patrons being able to come and visit their favorite performers that they have not seen in months.”

Bringing some needed joy to the people of the Marigny has been a part of the fun for Beville.

“To see the delight when the screen raises on both the performers’ and the audience members’ faces, as they are surprised by each other, is pretty delightful,” she said.

Peepshow Daiquiri happens at The Allways Lounge & Cabaret, Thursday through Sunday, from 3 p.m. to 7 p.m.