Complementary jalepeño cornbread? Count us in.

Chef Louis E. Brown II was done; the last thing he wanted to do was open another restaurant after he was burned by his first solo adventure, 100 Bar and Grill, through no fault of his own. The building in which the restaurant was located was sold out from under him by a nefarious landlord, leaving Brown out a lot of money and soured on the idea of owning his own restaurant. So when longtime friend and collaboration partner Edward Goodrich suggested that they embark on a restaurant together, it took Brown some time to warm up to the idea.

It wasn’t until he found the building at 2020 Belle Chasse Highway in Gretna, the former home of O’Brien’s Grille, that Brown decided to give it a shot and open a restaurant on his terms.

This is how Southern Charm Bistreaux & Bar was born.

Brown has been working in the restaurant industry for a long time and has held almost every possible position in the business. Most notably, he got his start at Copeland’s and he was executive chef at English Turn Country Club, as well as one of the first managers of Dat Dog, along with Goodrich. Goodrich also previously served as general manager Lucy’s Retired Surfers Bar and Restaurant in New Orleans. Both men knew that they could collaborate and come up with something special that would prove to be something different for the Westbank.

After months of meetings with investors who told the pair to “stay away” from a Cajun restaurant concept and focus instead on Italian food, Brown and Goodrich decided to open Southern Charm Bistreaux & Bar under the umbrella of their own company, Lagniappe Hospitality Group. The idea is to bring down home Louisiana cooking to the masses and make guests feel as if they are enjoying a meal with family.

Hospitality is the name of the game at Southern Charm and that begins with the “little something extra” that’s brought out to every table, most notably, complimentary corn bread. Brown and Goodrich want to run a restaurant where regular customers are greeted by name and feel welcome. Brown says that consistency is the key to a successful restaurant and anticipating customers’ needs and making them feel at home is a part of the Southern standard. The mission here is to offer good Louisiana food and a wonderful bar with an emphasis on culture and service. Brown says he learned about the importance of quality hospitality working at country clubs where customers enjoy feeling special.

The motto here is, “As Long as Everyone Eats” and Brown and Goodrich strive for a friendly and happy atmosphere where one can enjoy a lunch during a busy work day or have dinner and drinks with friends on a night out. Brown and Goodrich know that, in New Orleans, you can get good food anywhere — it’s the service that truly sets a restaurant apart. The pair hope to bring a new standard of dining to the Westbank, so that residents here won’t have to travel to the city for a nice dinner and people from the “other side of the river” will see a reason to cross the bridge. 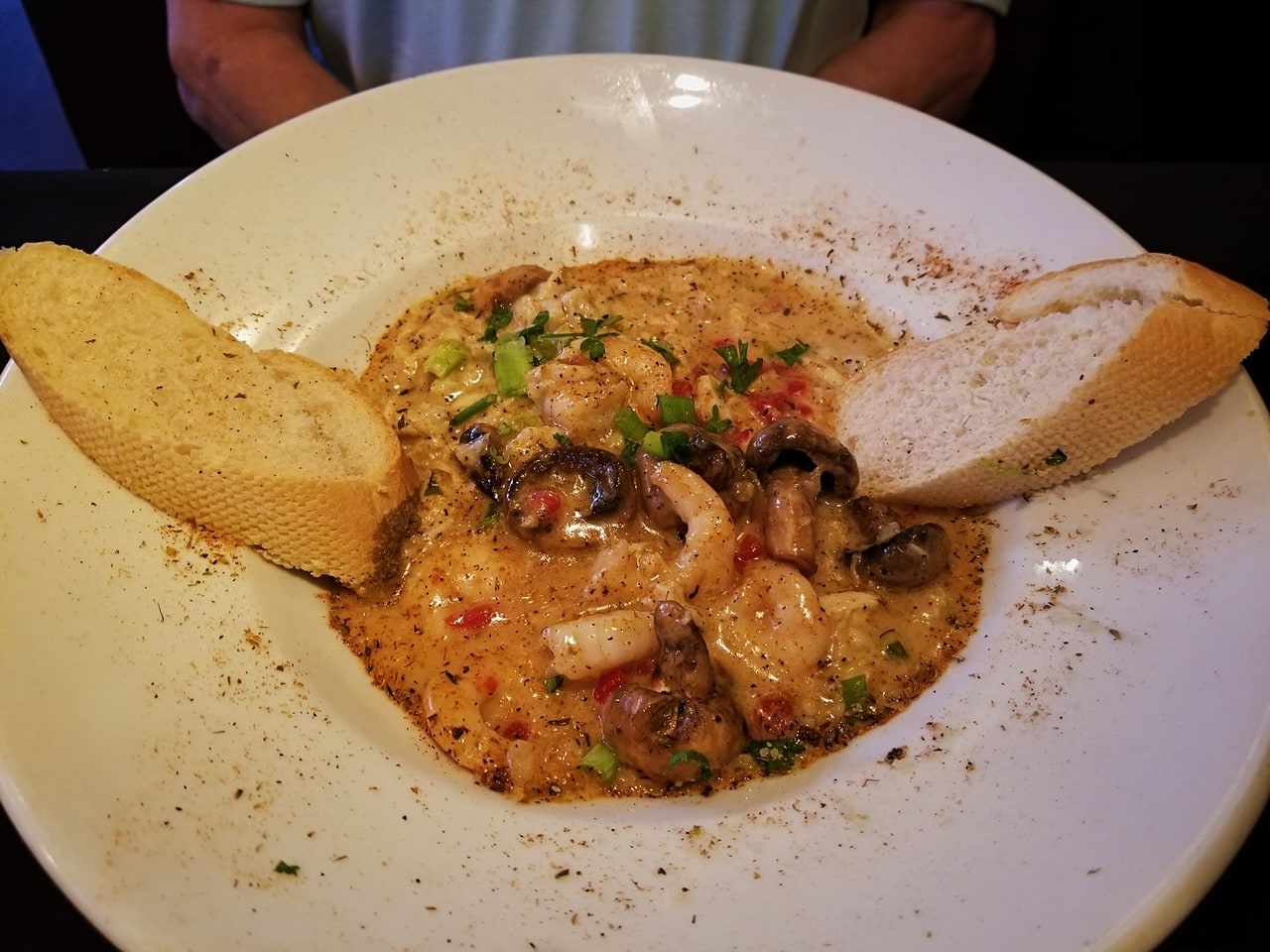 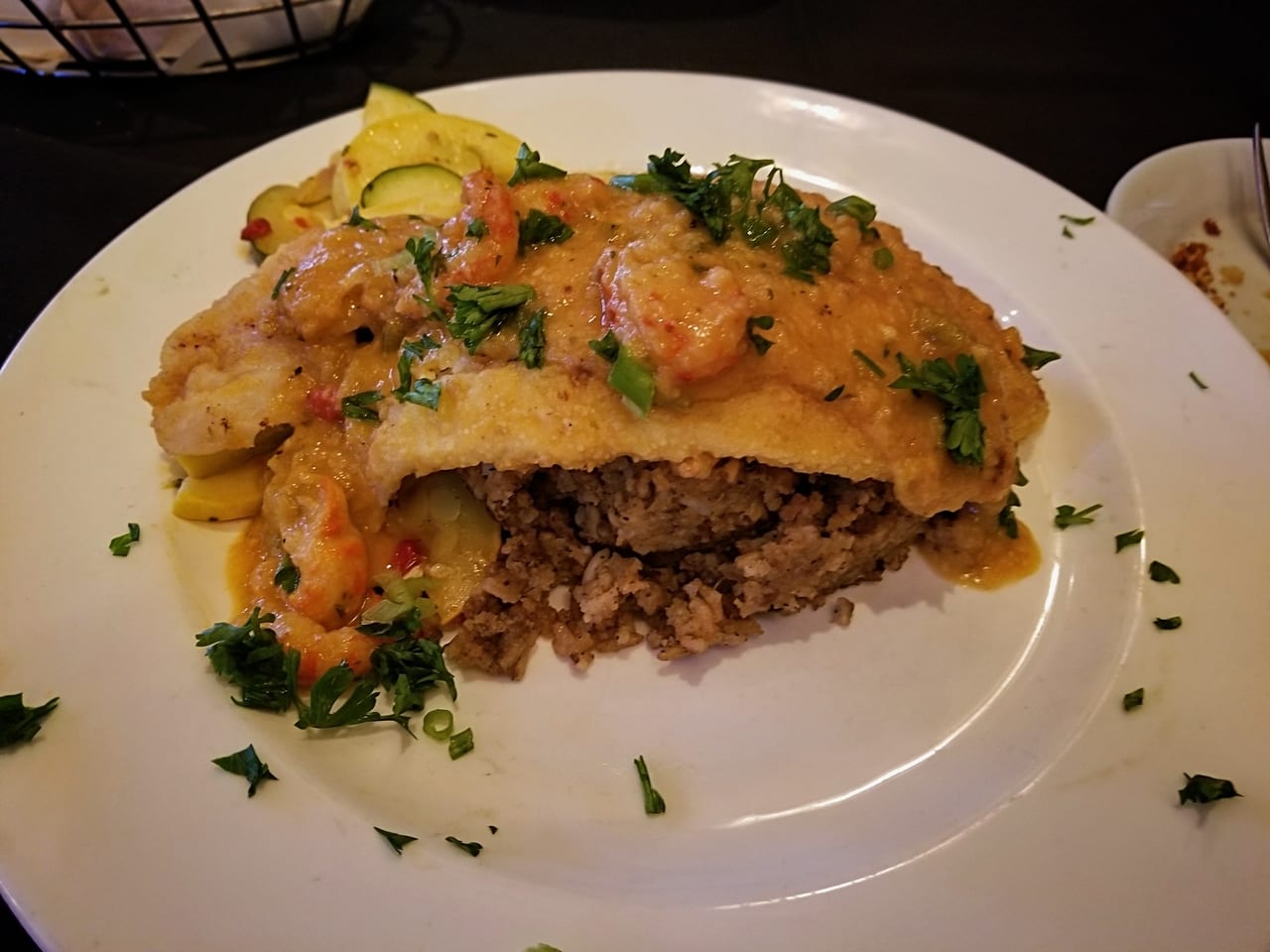 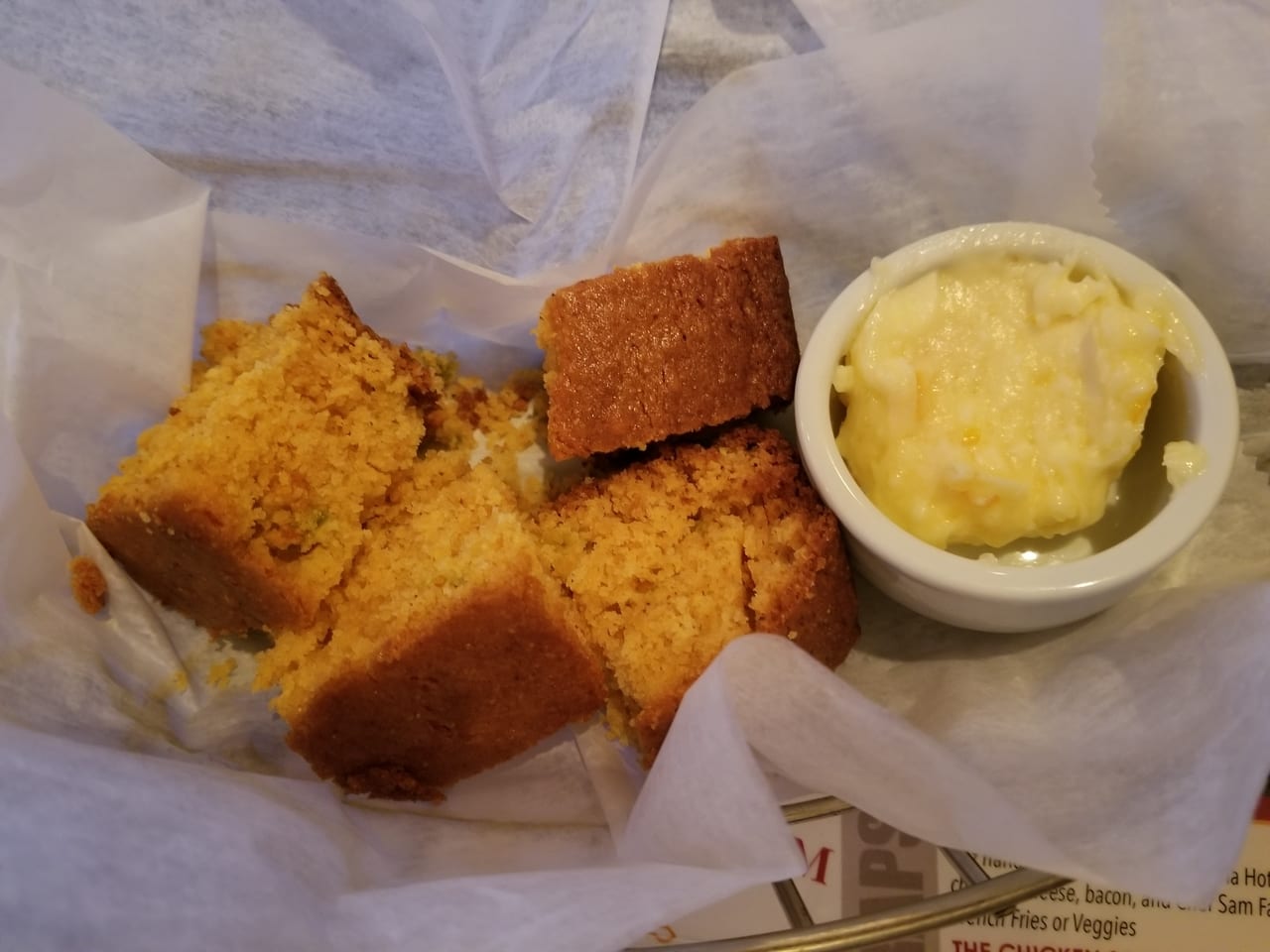 I had lunch at Southern Charm Bistreaux and Bar on the second day it was open and I was delighted to see the staff was busy serving a packed house. I was greeted with a smile at the door and when I was seated, was treated to some complimentary jalapeño cornbread.

Looking over the menu, I was happy to see on Monday through Friday from 11 a.m. to 3 p.m. they have an “Express Lunch Menu” that includes such offerings as Blackened Chicken Alfredo, a Classic Burger topped with your choice of cheese, Smothered Catfish, Mom’s Pot Roast and more.

Other selections on the main menu include barbecue shrimp, charbroiled oysters, a variety of salads, a selection of po-boys, burgers and other favorites such as pecan roasted redfish, seafood feast pasta, a pork porterhouse and a smoked duck leg quarter. The team also plans to serve brunch on Sundays.

Hospitality was certainly not on short hand during my visit here; I was repeatedly asked if everything was to my liking and co-owner Kendall Bussey came over and encouraged me to tell him if I had any suggestions on what could be improved. The staffers never stopped as they ran food out to tables quickly and made sure that no one who came through the door had to wait to be seated. Considering this was only their second day of operation, I was impressed with how well everything flowed. 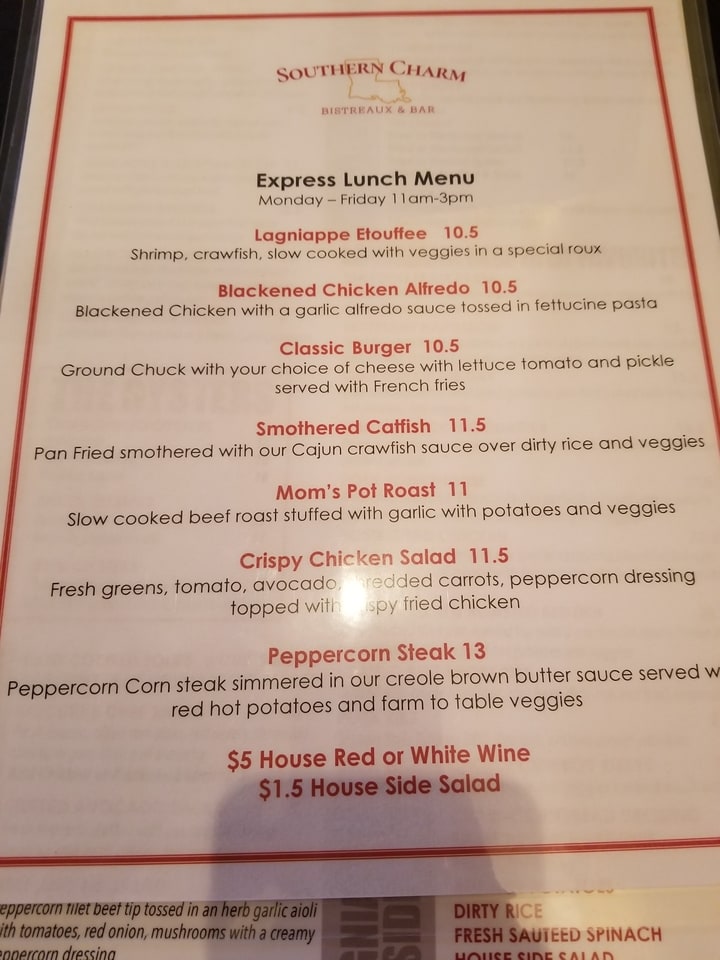 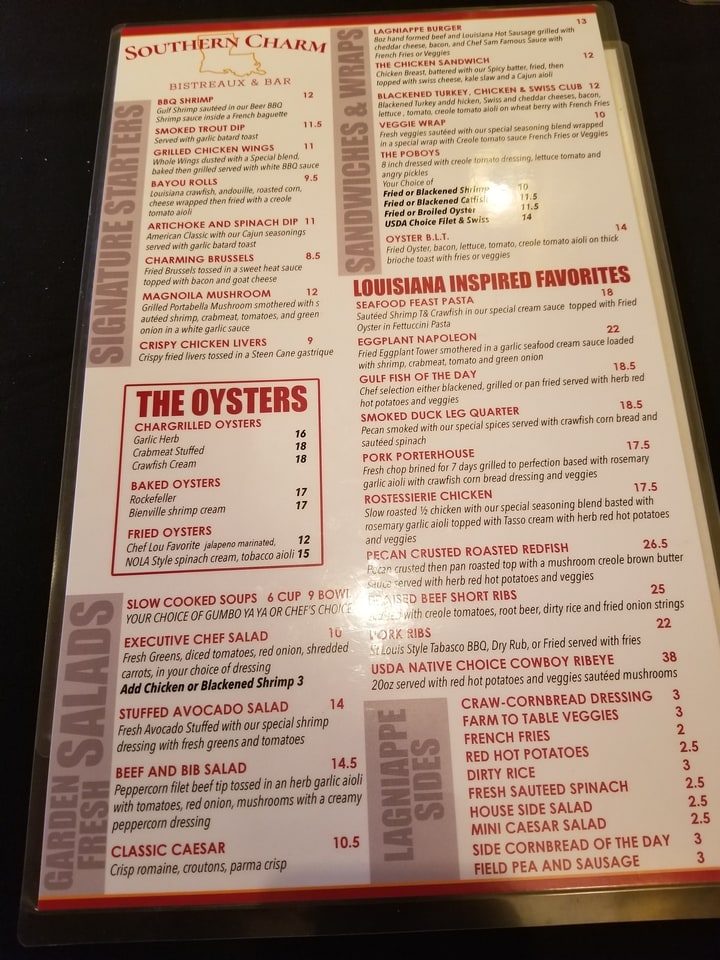 Customers seemed excited that a new locally owned restaurant was open in this space. Diner Marsha from Marrero, who was enjoying lunch with her daughter, said, “We’ve been looking forward to eating here since we heard they were moving in. We don’t like chains and we prefer to support local businesses.”

Chef Brown’s mission is to make visitors feel as if his customers are enjoying a meal with family and, as far as I’m concerned, it’s a mission accomplished. I felt welcome from the time I sat down until the time I walked out the door, and the company motto of, “As Long as Everyone Eats” seemed to ring true with a restaurant full of jovial customers and an equally upbeat staff.

The food was delicious, and the extensive menu made me eager to return sooner rather than later.