Blue Giant restaurant opened, then the pandemic shutdown happened — but they got this situation ‘in the bag.’

When Chinese-American restaurant, Blue Giant, opened on lower Magazine St. in January, the place was an immediate hit. The restaurant boasted wait times (and folks sure didn’t mind the wait) and the small dining room stayed full from open until close. When the COVID-19 pandemic caused a shutdown of non-essential businesses and only allowed restaurants to offer takeout and/or delivery service, owners Billy Jones and Richard Horner knew that they would have to adapt to keep their business afloat.

The concept for a Chinese-American restaurant came easy to Jones and Horner. Jones was raised on the Northshore and regularly frequented famed Chinese-eatery Trey Yuen. Horner, who grew up in England, had the same experience with Westernized Chinese restaurants where he lived. When Jones and Horner met, they bonded over their love of Chinese food.

“When we met, we had both been working in fine dining for some time and we would go to Chinese restaurants around town on our days off,” Horner said. “I think we tried about every Chinese restaurant in town and the more we went to them and explored the menu, the more interested we became in the food. There was a desire to try to perfect the obviously American dishes that are rooted in the diverse tradition of regional Chinese cuisine, but don’t actually exist in China.”

When the COVID-19 “only essential businesses” order came down, Blue Giant was forced to repurpose their original plan. With dining-in no longer an option, the team decided to offer takeout.

“It became clear from the earliest days of being open, back in January, that we wouldn’t be able to do takeout and maintain the standard of food we wanted to serve to the guests in the restaurant because of the limitations of the kitchen,” Horner explained. “We’ve gone from being a full-service restaurant with a packed dining room and a three-hour lunch service and a five-hour dinner service, to having a dining room full of bags, boxes and sauces in plastic portion cups and doing about the same amount of food in half the time each day,”

Horner says that customers have been encouraging and business has remained steady. In the months Blue Giant had been open, they hadn’t previously offered the takeout option because they want the diner to experience the food at its freshest.

“When people think of carry out, they think of Chinese food.”

“The reaction to the takeout has been overwhelmingly positive, and people have been very effusive about us remaining open, which has been really wonderful to hear,” Horner said. “Of course, it’s not without its challenges. Our food is designed to be enjoyed immediately fresh from the wok or fryer or whatever, so it kind of sucks that, for a lot of people, their first time trying it will not be the best it can be. In the scheme of things, that’s a very minor concern and I think the vast majority of people are very understanding.”

Horner said he and Jones have been able to tweak the menu a bit, in order to make it more travel-friendly. Kung Pao chicken is a new menu addition and Blue Giant’s famed Dan Dan Noodles are as popular as ever.

Horner explains the changes at Blue Giant are indicative of what every restaurant has had to do during these unusual times: adapt to survive. He counts his restaurant among the lucky that have been able to remain open and keep its staff employed.

“I think part of that is that we simply got lucky because when people think of carry out, they think of Chinese food,” Horner said. “Another huge part of it has been the efforts of groups and individuals to support restaurants and in turn feed the badass people who are working in healthcare.”

Horner credits Devin De Wulf, founder of the Krewe of Red Beans, who has pioneered Feed the Front Line, an initiative that collects donations to spend at restaurants to buy meals for healthcare workers.

Horner said now is the time for the restaurant industry to come together for the greater good.

“I think you see that spirit of creativity, generosity, and, above all, community across the entire industry,” he said. “You see the creativity in people doing demonstrations or classes online, showing people how to make the most of their time at home. The overall impression you get from the entire industry is that these are people who genuinely care, who embody the spirit of hospitality and, even when they can’t provide it in the traditional way, are still passionate about it.”

I had visited Blue Giant before, but I was eager to support them again and see how their takeout process works. It’s really easy: call in your order (504-582-9060) and the gang sends you a text when your food is ready for pickup. Wave through the window when you get there, grab your food and pay- that’s it! You just got great food in a super safe way!

In my order, I got an egg roll, the shrimp wontons and the Dan Dan Noodles. The shrimp wontons were new to me and I loved how tender and packed with flavor they were. They had some spicy chili on them, which added a nice bite.

The traditional egg roll is flash-fried to a nice crisp and packed with chopped carrots, bean sprouts and pork. There’s one per order and it makes for a fantastic starter or nice side dish addition to the meal. 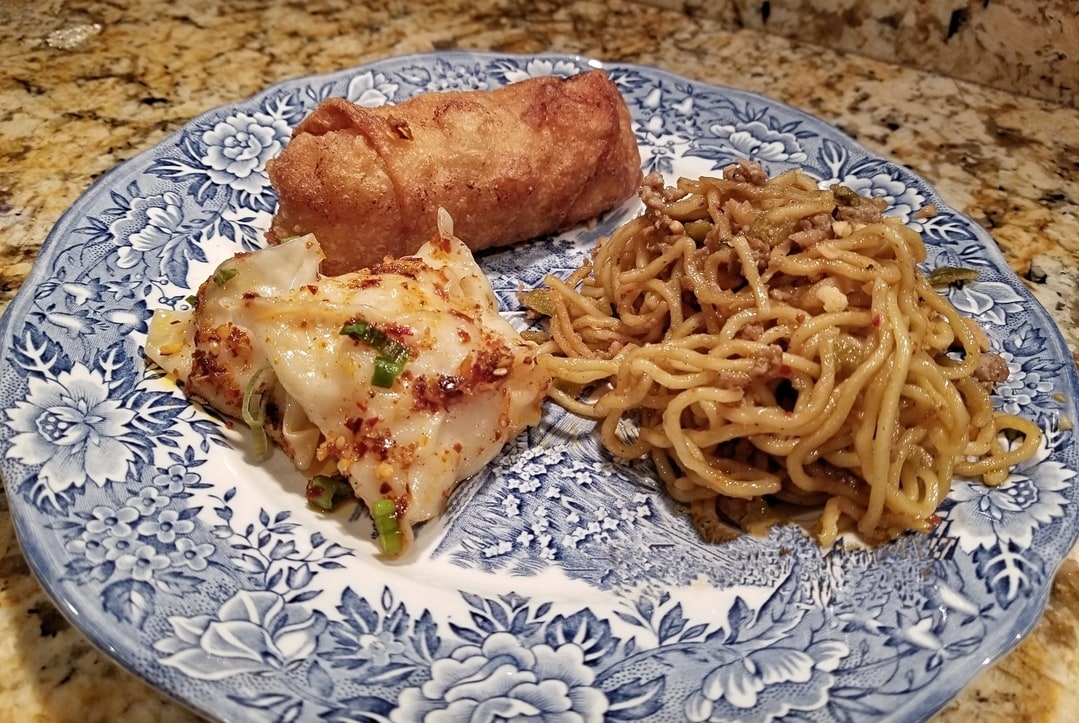 One of the more traditional dishes on the menu, the Dan Dan Noodles, are tasty noodles made in the wok with ground pork, garlic, ginger, chili oil made in-house with dried chiles and Szechuan peppercorns, sesame paste and fermented Chinese mustard greens. The noodles are then topped with peanuts and green onions. Horner described it as a really nice balance of hot, rich and funky, and I personally loved the spice in the dish. It wasn’t overwhelmingly hot but had a good flavor balance (and it was even excellent after reheating!).

These days, “dining-out” means something a little different, and Blue Giant is doing a wonderful job of keeping the good food coming and feeding the community in the safest way possible.