The ‘Snippets Of New Orleans’ illustrator is going another way with her fine art hybrids.

It’s hard to spend any time in the swamp without your mind traveling to the idea of the in-between. Everything exists in a state of not-quite. Seas of grass conceal a lack of solid land underneath. The entire ecosystem is transitional without ever really changing, marking an area between terra firma and the ocean.

It’s a place where the boundary lines are blurred, between land and water, sure, but also between each passing hour, day and year. It’s a place where impossible trees grow out of a primordial soup full of hangers-on from another era of the Earth. It’s the perfect place for Emma Fick, because Emma Fick has a foot in both worlds.

The artist found success via her Snippets of New Orleans illustrations, selling books full of street scenes of the city to enraptured locals and enamored tourists. And while those illustrations continue to sell and pat the bills for Fick, she’s since moved on to fine art. Fick’s new work bears little resemblance to her colorful and off-kilter Snippets books, focusing instead on the idea of the hybrid. She blends Louisiana swamp imagery with the style of Byzantine frescoes that she encountered in Serbia to create her backdrop. On top of that she sets yet another hybrid, creating a pantheon of goddess bird-women to populate her otherworldly take on the backcountry.

Archival prints of new work — test prints looking so good I want to weep. Chris is a magician of color-matching.

“I’ve always been really interested in hybrids of all kinds,” Fick explained in a recent interview with Very Local. “I took the raw source material of the swampland lore of Louisiana, the visual lore of this area and I started laying those on top of [Byzantine-style artwork] to create an alternate universe, one that’s overseen by female goddesses.” 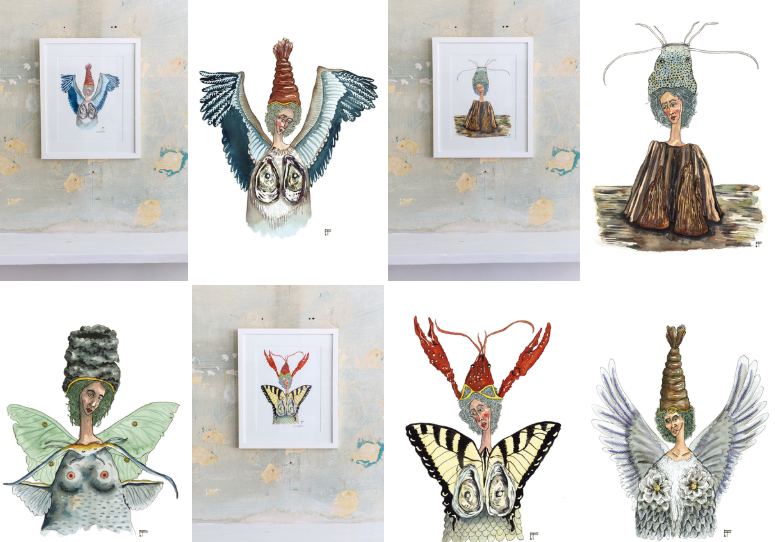 Looking at Fick’s work, with its parallels to early Christian art and folkloric drawings of ancient bugaboos, brings up the same crop of feelings that one gets when stepping into the swamp after a long time away. You can’t help but feel like you’re connecting to something ancient and unchanging. Fick noticed as she followed the thread of her own obsession with hybrid creatures that the stories she’s currently telling exist in the history of almost every culture.

“If you look back at other cultures, you’ll always find a hybrid. There are creatures that are half-bird, half-woman in almost every culture,” she said, explaining that she based her current series situating mythological birdwomen with endemic Louisiana flora on the Russian alkonost.

Guardians of the Magnolia – nearly complete

But the fixation with hybrids traveled over from the Old World well before Fick brought it back from a stint in Serbia. Fick explained that she found examples of in-between creatures in earlier iterations of Carnival.

Living a sort-of hybrid life herself, producing her whimsical snippets to support her fine art projects, Fick is more than willing to bring that tradition of mixing into this century.

Fick’s art can be found around town in the Urbanism & Eccentricities exhibit at the Old No. 77. A wider assortment of her work can be found at Fick’s website.