Here’s the thing: I might be the only person who loves a group text. Honestly, it just…makes sense. Get all the people in one proverbial room, and handle all the things – spill tea, tell jokes, comfort a friend, celebrate a victory, organize Mardi Gras parade carpool details — and finalize brunch plans.

I sent a brunch invite to my closest friends and lo and behold, seven ridiculously busy people got together, all donned in raincoats and sweaters and thermal-lined Crocs, and dined at FullBlast Brunch. Yes, that’s the full name. It’s a whole brunch restaurant. Yes, they serve lunch, but for the most part – brunch, all day, erryday – not really – they’re closed on Tuesdays and Wednesdays, but you know what I mean.

As we were seated, we all placed our eyes on the menu, because one thing that makes us friends is our often inability to choose meals in a timely manner. But we were focused (and hungry), spoke our choices out loud and helped each other get our orders together, and of course the one thing we could all finalize upon were the drink orders.

A disclaimer: I actually gave up alcohol for Lent. It’s been… interesting. But I reserved BrunchFaced brunches for the only time I can drink. Two other friends who also gave up alcohol did not have the same rule and ordered coffee + orange juice. They’re doing Lent right, y’all.

As for the rest of us, we ordered mimosas because, duh. We don’t need to explain. But there was one fun twist at FullBlast – the Mimosa Trio. This bundle included three mimosas – one orange juice, one mango, and one cranberry. It was a popular item across the table. 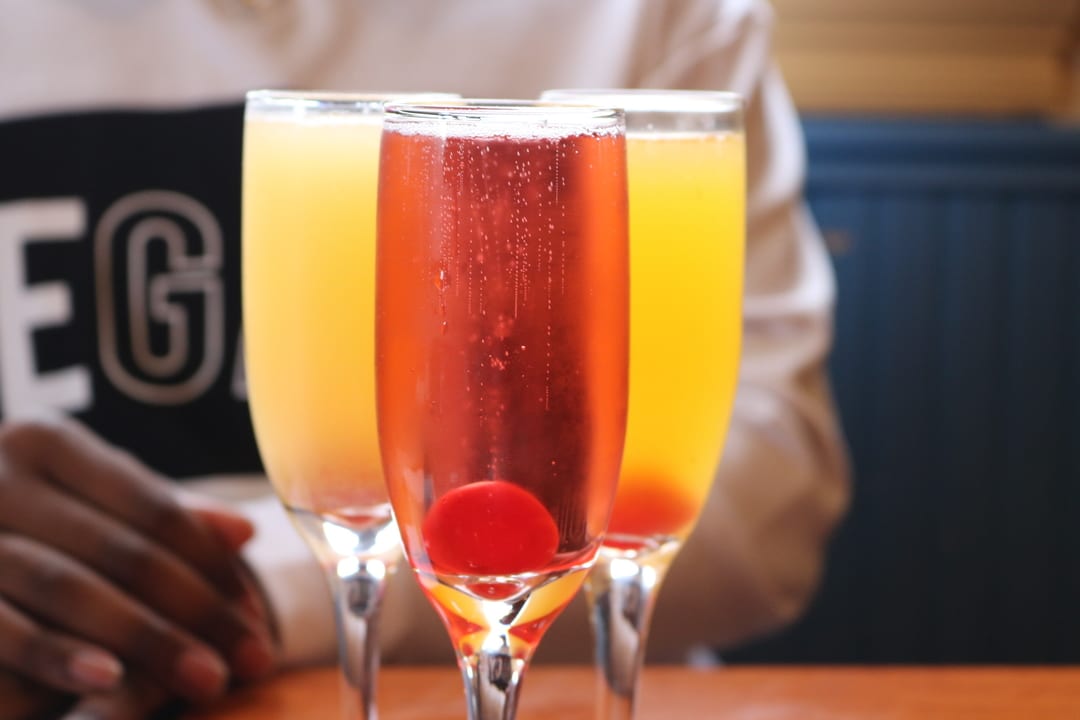 Once the mimosas kicked in, that’s when brunch really became brunch. As the queen of Ice Breaker Questions, I posed a question:

“If we were stuck in a brunch spot for the rest of our lives, what two movies would you bring with you?”

The answers were interesting and ranged from classic Disney movies to one movie about some Navy SEALS to BeBe’s Kids. It was also revealed that two of the seven friends have never seen BeBe’s Kids and another group chat was started to plan a movie night because that’s unacceptable.

The conversation moved from movies to music to Disney Channel Original movies to how we all manage to fall asleep during massages to something that will remain nameless that brought the entire table to tears with laughter. 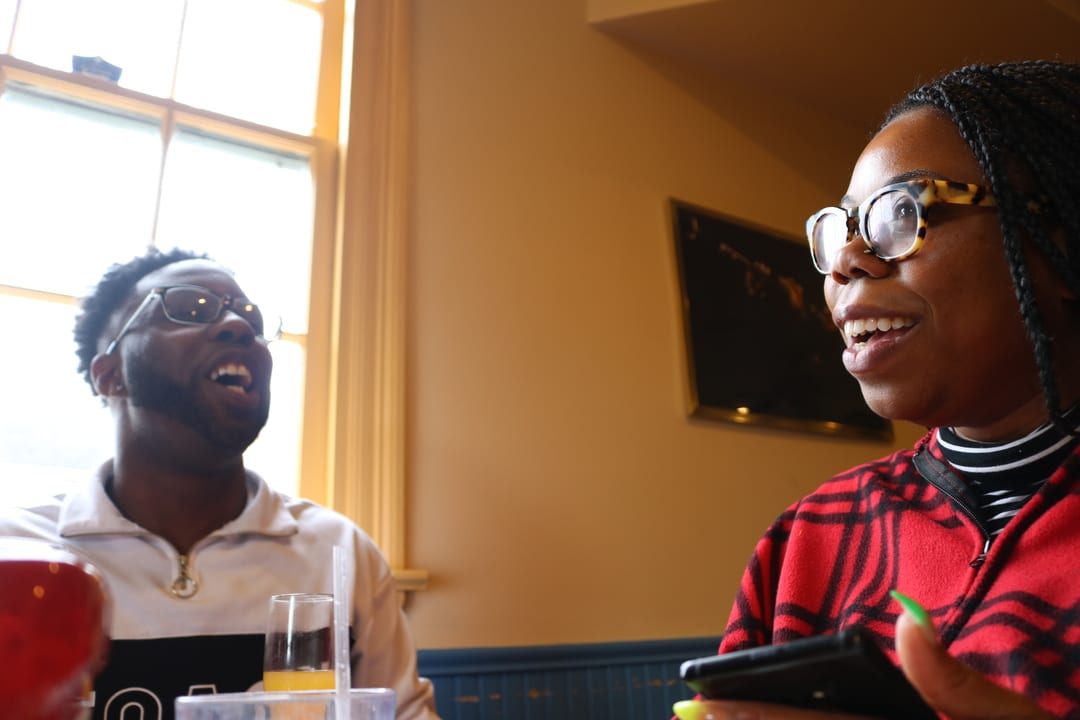 At some point, before our food came, I paused and looked around and realized: “This is my good place.”

And then the food came… and I was really in The Good Place. Ready for the rundown? Because it’s a lot and it was GOOD, OK? 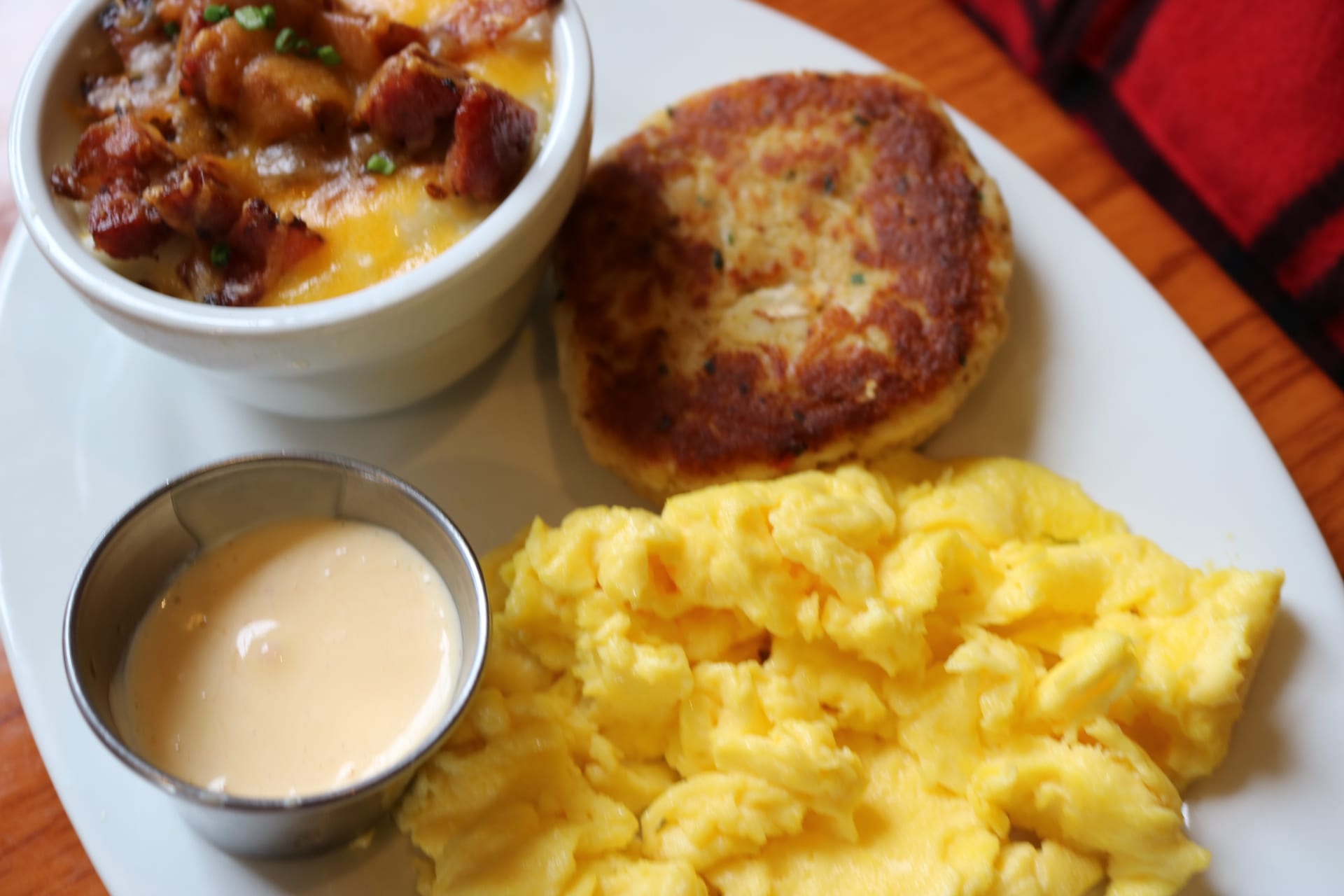 Crab Cake breakfastCrab Cake breakfast: My friend often orders the standard breakfast for brunch, and always seems to apologize for it. But I always reassure him that there’s nothing wrong with that, because there’s nothing more comforting than a hot, southern breakfast. The Crab Cake Breakfast was just that, paired with the FullBlast grits, loaded with (ready for this?) Sausage. Bacon. Cheese. Chives. All of those hearty things wrapped in a bowl of creamy grits were a hit at the table.

And the crab cake was just as the waiter said – more crabmeat than breading, but just enough breading to hold it all together.

Steak Benedict: You can’t go wrong with steak and eggs (or can you?). But FullBlast got it right, with a nicely seared steak and fluffy scrambled eggs. The enjoyer of this meal left the plate clean. Let’s not forget the breakfast potatoes – which were crispy and potatoey all at the same time. I stand by my opinion that breakfast potatoes are a supreme brunch side dish.

French toast with blueberry compote: After her first bite, my best friend nodded her head and hummed “mmhhmmm” over the french toast made with french bread and topped with plentiful blueberries. The blueberries smelled fresh and moved itself up on my list as a proper pancake/waffle/french toast topping.

Cajun scramble with shrimp: “There’s shrimp, too?” One friend exclaimed when we realized the Cajun scramble included more than just eggs, cheese and sausage. There were fairly large shrimp scrambled in there — fresh as one would want, and added a special touch.

FullBlast breakfast: Yes – surprisingly, I went with the standard breakfast because honestly, I missed Saturday mornings as a kid when my mom would make a regular-degular breakfast. And this one didn’t disappoint! The grits were creamy and made me say out loud that I’m grateful for my ancestors who made grits out of nothing. And like I mentioned earlier, there’s really nothing better than food hiding under another piece of food – especially when it’s andouille sausage! Deliciousness all around.

Every item provided some new visit to Flavortown. Fresh ingredients, bacon cooked to the perfect crisp temperature and loaded grits that were out of this world. FullBlast Brunch provided us with just what we needed – a time to fellowship, share jokes and a meal, one that filled our bellies and our souls.

If you’ve been looking for a chance to get your friends together, hop in the group text, set a brunch date and let FullBlast handle the rest. I promise – it’ll be worth it.

GET EVEN MORE BRUNCHFACED: Cru – where it feels like home, even if you’ve never been