Not one, but two bars, and a gorgeous courtyard make up one of Vogue’s most Instagram-friendly hotels

If you walk too fast, you might miss it.

The Catahoula Hotel sits in a sea of bigger giants; the NOPSI Hotel towers in the next block, and Holiday Inn Express is not far behind. But this renovated Creole townhouse, built in 1845, transports you to a place with a Bohemian, almost South-American vibe, an island of sorts in the busy mix of downtown.

The Catahoula was named among the “9 Most Instagrammable New Hotels Around The World” by Vogue Magazine, and it’s easy to see why. In the small lobby, at the bar no less, lies one of the cities best-kept secrets: Midnight Noodle. This vegan restaurant was just named the reader’s choice Best Vegan Restaurant by Nola Eater.

Test kitchen item #23: Sheng Jian Bao but vegan AF! Our dumpling filling and Bao recipe combine forces for this ultimate comfort snack. These will randomly be on the menu this week so be warned😈🙃🥟🌿

On the way up the stairs, you can’t miss the mural of burlesque star Trixie Minx in the courtyard. It’s the part of the hotel that caught Vogue’s attention. 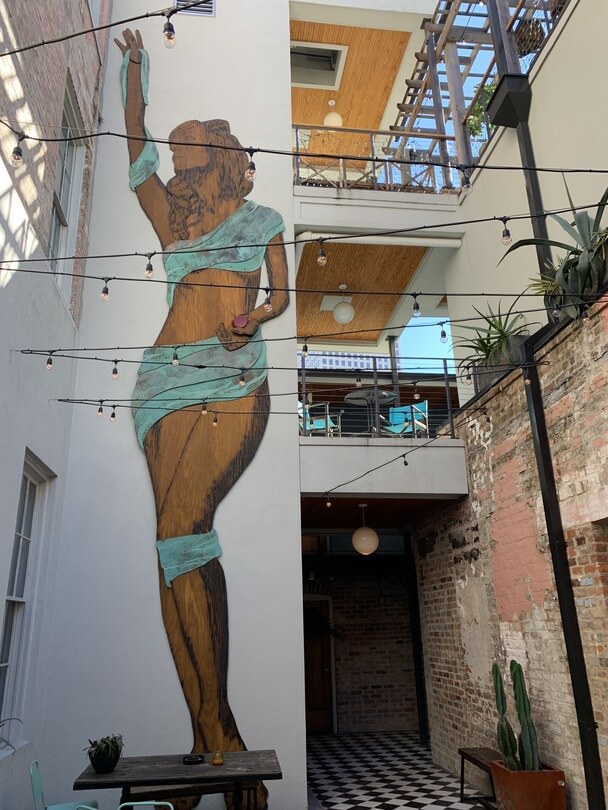 The rooftop bar is the part that’ll reel you in, and keep you coming back. The view is unique, with upward views of the city skyline due to the bar being shorter than the shinier, taller hotels and office buildings surrounding it. The menu spotlights Gulf Coast focused craft beers, South American and Spanish wines, and a carefully curated mezcal and tequila selection. It opens at 4 p.m., just in time for an after work pick-me-up.

Check here for more information about the Catahoula Hotel and join Very Local New Orleans on the rooftop for movie night on Thursday at 7 p.m.