On the outside, it looks unassuming. But on the inside, the flavor is big.

I don’t want y’all to know about this secret, because secrets are more fun when fewer people know. But it’s time for you to experience something truly authentic and amazing.

In the back of a corner store on Martin Luther King Boulevard and Baronne Street is one of the city’s best (if not its only) spot for authentic Filipino cooking.

For me, “authentic” is a pretty high bar to meet; my mom is a first-generation immigrant from the Philippines. She’d probably hit me with a wooden spoon if she knew I only eat certain dishes at this Central City joint, and not her kitchen.

On the outside, CK’s Hot Shoppe looks unassuming, and maybe even a little dreary. But you can’t let looks fool you.

My latest visit here was at an office lunch outing. Half of the group was familiar with Filipino food, the other half were pure novices to the cuisine.

It’s hard for me to describe Filipino food to people, other than, “It’s good, you should try it.” I’m not a food writer by any stretch of the imagination, and I grew up on these dishes. But I do know the difference between new-age fusion Filipino fare, and the stuff that tastes like my mama cooked it.

I suggested to the newbies to look online so they could see pictures of the food, and if you’ve never had Filipino food or you’re a visual eater, this is the route to take. The problem is, they kept saying, “It all looks good.” So I took the reigns.

“Can we get the chicken adobo, pancit, and the lumpia?”

Chef Crispin Pasia took our order himself, offering the answers to any questions we had about the food. Another reason you know the food is good: Pasia has been named one of the Best Chefs of Louisiana twice: in 2016 and again in 2019.

Pasia suggested we order more food because there were five of us, so we added on sisig and dinuguan.

First up: the lumpia. Akin to egg rolls, pork and veggies come wrapped in fried paper-thin dough. But Filipino lumpia is smaller and has way more meat involved than your average Chinese takeout egg roll. Here, they come in orders of 10 and are served with sweet chili sauce. We got two orders; none of them made it home.

While we waited, you could hear the sizzle of meat, see the smoke from the kitchen, and smell the aroma of garlic and soy sauce in the air.

Then like magic, Pasia carried out all five plates of food out himself. Everyone had their own plate of rice (because how else would you eat Filipino food?), but the rest of the entrees’ were served family style. Everyone got to dig in.

I went for the dinuguan first, because I figured once everyone found out it was basically pork and blood stew, they wouldn’t want it. I was wrong. You know when you suck on your finger after getting a paper cut? It wasn’t that. It’s a rich, salty, tangy stew, and it reminds me a lot of adobo.

Adobo is a really good place for beginners to the Filipino food game. I basically tell people it’s soy sauce and vinegar chicken, but CK’s also offers a pork option. Pasia’s version has just enough bite at the end for you to taste the vinegar, but not so much that it’s sour.

Pancit is a noodle stir fry, full of veggies and meat. Think lo mein, but with lighter, thinner noodles.

This is where I admit that I never had sisig, so even on this familiar journey to what reminded me of my mom’s kitchen, I went on an adventure. It was presented on a hot sizzling plate, and the smoke wafted from our table. It’s a delicious mix of lettuce, onion and pork belly that’s fried until it’s crispy, but then it’s made creamy with an egg and mayonnaise. I usually have an aversion to any form of egg that’s still runny, but Pasia’s food is so good I didn’t care. Neither did the group I was with. 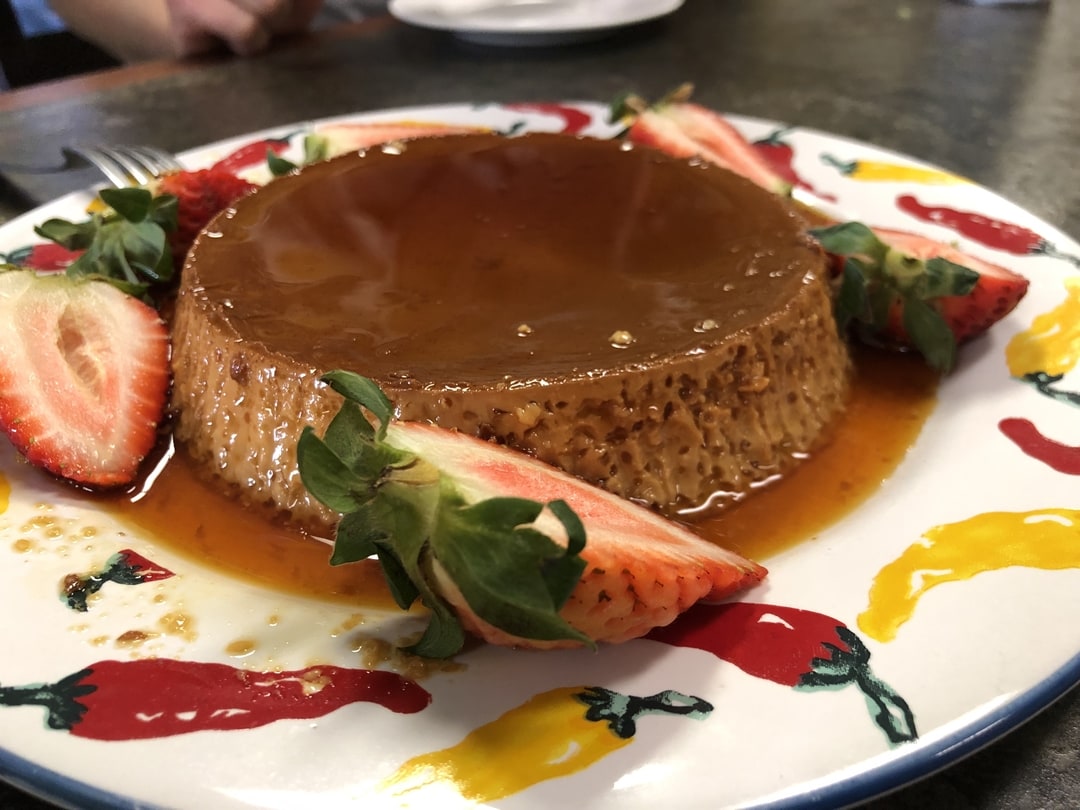 We finished the meal off with leche flan, and even with dessert, one of us at the table initially wasn’t all the way comfortable with the choice. It was an aversion to the usual custard consistency of flan. But, just as he’d done the whole meal, Crispin presented a plate that the whole table could enjoy. His version is sturdier than most flans, with almost the consistency of cheesecake, and the caramel sauce and fresh strawberries were delicious.

The meal was a journey of getting out of your comfort zone, for everyone in the group. I wasn’t sure about bringing my work family to my secret spot, because my version of family is a little different from everyone else’s. But the food there surpasses uncomfortable moments, and you end up forgetting these aren’t your cousins, that you aren’t in your mom’s kitchen. It’s that good.

Read Also: Thai after Thai! Delicious spots for food from the ‘Silk Road’