Ginger beef lettuce wraps with rice noodles, chicken and waffles, marinated tuna bowl with avocado and edamame, braised brisket with bacon mac and cheese. Sounds hearty, yes? What if we told you it was vegan? In fact, there’s no meat, fish, cheese or eggs in any of the food on the menu at Coalesce Goods, which opened in St. Roch Market on Feb. 12.

Chef Jas Rogers and Alex Davis are culinary alchemists, working magic at their new spot at the front of the market, creating game-changing plant-based deliciousness with their carefully guarded recipes for homemade vegan proteins. By using multiple techniques, from marinating to air frying to dough proofing and braising, they layer flavors and textures to create dishes bursting with good taste and color.

The pair, who are partners in business but prefer the term girlfriends to describe their personal bond, are both from Houston but met a few years ago when they were working as servers at Gordon Biersch.  Rogers, 28, and Davis, 23, became fast friends and instant soul mates. Their romance blossomed over time. From the start, they talked about dreams and hopes for the future. Turns out, those dreams unfolded quicker than they thought.

A new take on comfort foods

When COVID-19 hit, Davis was bartending at Gordon Biersch and Rogers was just starting to work at Delmonico. Both were furloughed. The pair had been experimenting with a plant-based diet for health reasons and, while not wanting to be labeled only plant-based or only vegan, it was a culinary moment that changed their collective perspective.

“Restrictive diets don’t work for us, but we do lean towards clean eating,” said Davis, who walked the vegetarian path for some years when she was younger. “It was an isolating experience because I felt that I’d lost connection to my roots and couldn’t eat the foods of my childhood,” she recalled.” 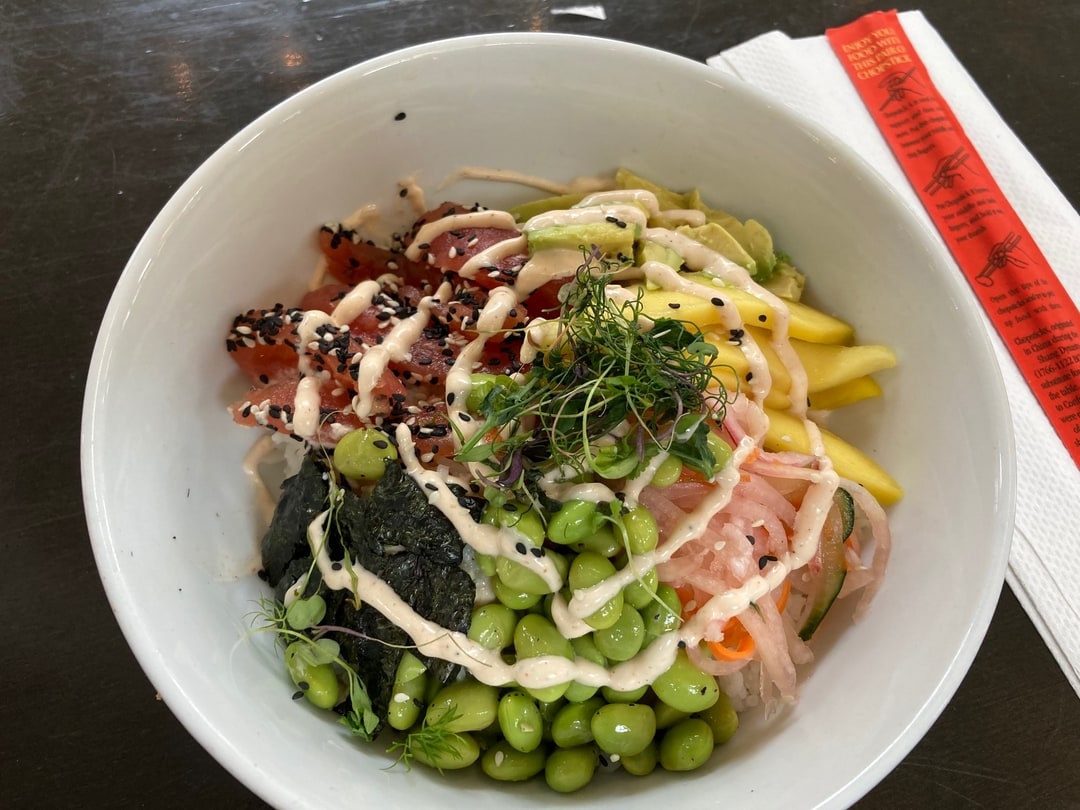 Her family has Cajun roots in Louisiana, so when her dad cooked soul food on Sundays, it was the epitome of home.

“I wanted to find a way to make that kind of comfort food, like gumbo and shepherd’s pie, without using meat,” she said.

Rogers is a culinary school graduate with five years’ experience as an Army chef, feeding between 5,000 and 10,000 soldiers every meal period at Fort Hood, Texas, and Fort Leonard Wood in Missouri. After graduating from the Art Institute in Houston, she moved to New Orleans and helped open True Food Kitchen and Zea’s Rotisserie, working as a server to help pay the bills.

Davis, who said she always cooked at home because her mom worked late, has a palate informed by downhome Louisiana cooking as well travels around the U.S. and internationally.

From pop-ups to St. Roch Market

They started doing pop-ups at The Drifter, calling themselves Tastebud Satisfiers. Then, late night, until 3 a.m., they’d hump it from their 7th Ward home over to the Allways Lounge and Hi-Ho on St. Claude Avenue and hawk their gluten-free vegan Mardi Gras doughnuts. As is so often the case in New Orleans, word of mouth spread – their friend Logan is a drag performer who also manages a coffee house who also knows people at St. Roch Market and who wants to see them succeed – and they got their shot.

“We didn’t even have a car when we started,” Rogers recalled. “We were racking up all these Uber cleaning charges because we were carrying food around – it was expensive!”

They have wheels now, and under the moniker Coalesce Goods, putting their “food is love” message out into the universe.

“Coalesce means unity, working together,” Rogers said. “Our dream is to have an online marketplace of sustainable artisanal products, including our plant-based proteins.”

For the two of them, the idea of making homestyle, delicious plant-based dishes is a way to debunk stereotypes surrounding this kind of eating.

“We want to break the boundaries of veganism – it’s not just rich white people that eat this way,” said Davis.

“It doesn’t have to taste bland or be expensive. This is just good food that makes you feel good,” Rogers added.