Turkey and The Wolf’s Ian Willson shows off his surprisingly sharp creation.

When Bon Appetit brazenly named Turkey and The Wolf–the kitschy sandwich shop nestled in a suburban corner of the Irish Channel–the 2017 Best Restaurant in America, the editor and Foodist-in-chief, Andrew Knowlton noted that every dish and cocktail in the unassuming joint has a backstory. He quoted chef and owner Mason Hereford admitting that “recapturing a childhood memory is a really effective way to convey what our food is and what inspires it.”

This is as true in the kitchen as it is behind its small, but very creative bar, where the cocktail menu tends to change every four months or “till we get bored of making the same thing.” It currently offers five original cocktails, each crafted by a different bartender. The bartenders at T&TW have as eclectic and atypical career paths as the peeps helming the kitchen, and their creations are as wild and nostalgic as the heroes that landed them the spotlight.

On a typically busy lunch-hour rush, Ian Willson worked diligently trying to turn some leftover sake into a Vietnamese coffee cocktail variation. He had already succeeded using it as the spirit base–alongside limoncello, chamomile and fennel–on the special of the day he’d named “Mr. Bubble’s Bleach Job.”

“We are all a bit of mad scientists here, but he takes the cake on being the craziest, specially with the names,” pointed out general manager Kate Mirante while we witnessed the experiment evolving.

From the ridiculous names of the cocktails on the menu, Willson’s creations include the The Last of the Denver, The Last Dinosaurs and You Cannot Touch The Rainbow. The later is an homage to the popular slogan from the 90’s celebrating its main ingredient, Skittles. But noting that they notoriously melt in your hands (as they do in the drink), it aims to clear some of the propaganda’s misconceptions. Secondly, both Willson and bar manager Brett Tillden share the nickname “Mango”, and once again with the 90’s throwbacks, its nods to the popular Chris Kattan SNL skit.

The inspiration behind the cocktail came about after a very busy Carnival week prompted a fellow bartender to gift the staff a bag of the popular childhood candy to lift their spirits.

“I decided to emulate the taste of Skittles with what we had around” Willson explained.

Immediately, there might be a preconceived notion that the drink will err on the very sweet side, but it’s actually tangy and astringent, surprisingly succeeding in its mission. The trick? Fennel. Don Ciccio & Figli Finocchietto Fennel Liqueur to be precise, as well as the very bitter Calisaya Liqueur made from cinchona bark–once considered an ailment for fevers and Malaria in the Amazonian region.

“A lot of people are scared of the anise flavor but it made a lot of sense right off the bat,” the bartender revealed.

Huh? Maybe not to us regular civilians, but as it turns out, Willson is no stranger to the flavor profiles of herbs and vegetables. He worked for almost six years as the in-house gardener at La Petite Grocery before venturing on his own with Southbound Gardens.

“I sold produce for a bunch of restaurants around town, that’s how I know Mason,” he explains.

Southbound Gardens is no more, but he has plans on starting a nursery business come fall.

“To me it all makes a lot of sense, the gardening and the bartending, it’s not weird that I do what I do, and at the same time I’m very lucky to have ended up bartending here.” 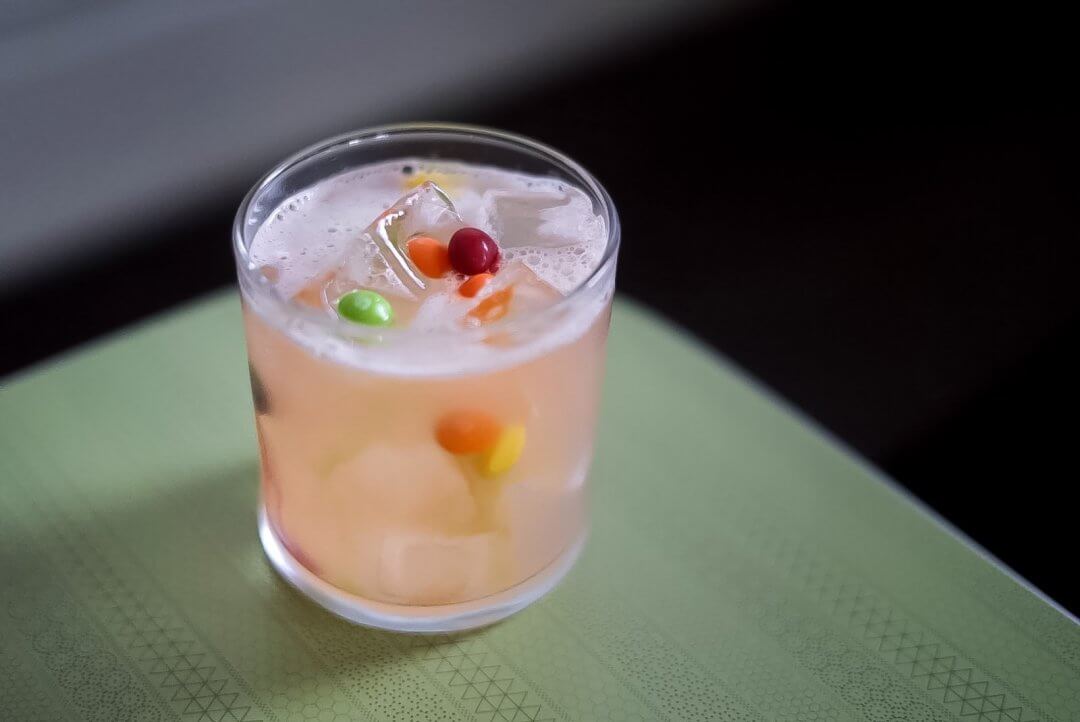 You Cannot Touch The Rainbow ($9)

Add all the ingredients into a shaker with ice and shake vigorously. Strain and serve over ice with a handful of Skittles.