In a digital age, putting your hands on a record just feels good.

Stepping into Euclid Records is like stepping into the ’90s. The walls are pink, the decor is funky, and there is 4,000 square feet of vinyl to dive into. 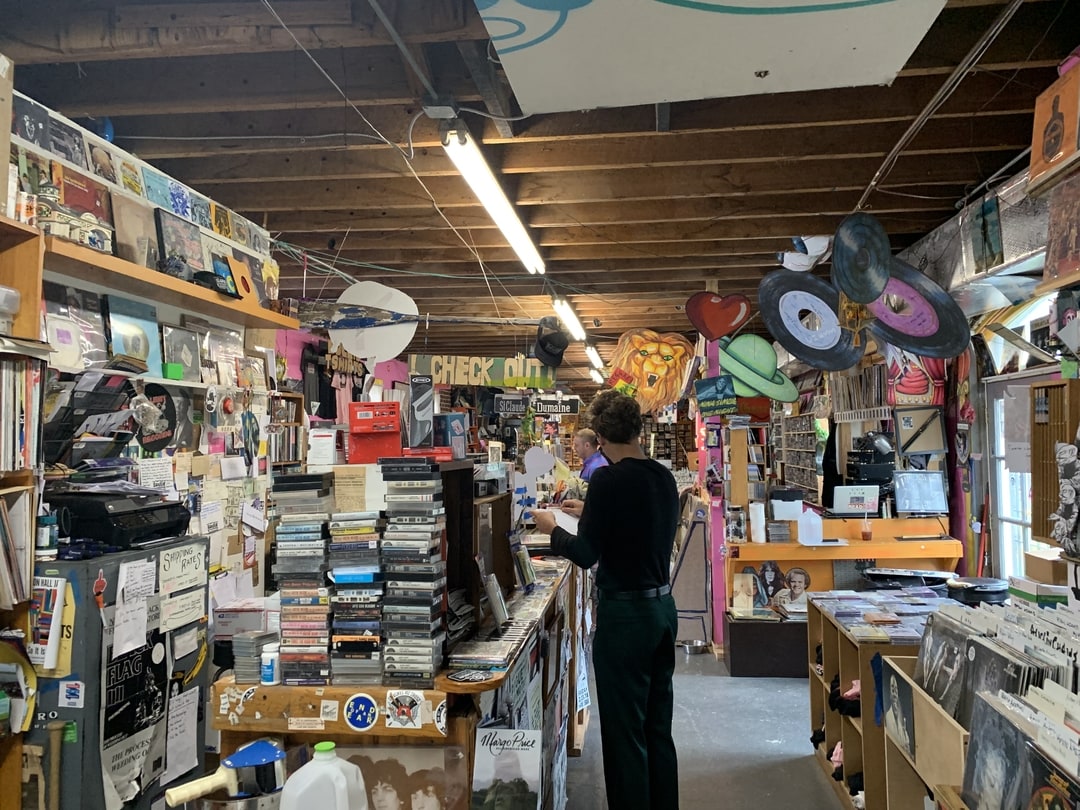 Records line the walls upstairs, downstairs, on the ceilings, and if that wasn’t enough, some nights there’s even live music on a stage built into the store. Maybe it wouldn’t fit into the scenery Uptown or in Lakeview, but for regulars, it’s just right.

“To me, this is what a record store looks like,” said Lefty Parker, manager at Euclid.

Parker has been managing record stores for decades, but during 1993 while in Knoxville, Tennessee, record stores started declining. In 2010, Euclid came to the Bywater, and Parker jumped at the opportunity to return to what he loved.

“We designed the space to look like record stores did in the ’90s as though there was not a continuum break,” he said.

Some stores only cater to specific genres of music or have quirky niches, like only taking cash or only selling vinyl or cassettes.

“There are seven record stores in town,” explained Parker. “This one is music. Theoretically, you think all of them were about music, but not necessarily, or they are about specific music. This one is about the whole of music.”

Euclid uses all of its space for multiple genres of music and formats, selling CDs, cassette tapes, vinyl records and, of course, record players. You can even get records from local bands.

“We do consignment for local bands,” Parker said. “We buy a lot of stuff from local bands, and we also have shows here.”

Parker says that while there might be a renewed interest in vinyl records, it’s not just for vintage purposes.

“I think that many people never gave up on any kind of format,” he said. “It’s not shocking to me that it’s become more popular again because CDs are a bad format. Not to say that I hate CDs, I have thousands and thousands of CDs, I love CDs in many ways but they get scratched and they get ruined. Records, they just work. It turned out to be a really good format and probably the most durable format. Out of all the things I lost in Katrina, which was thousands of CDs, I was still able to pull out 200 records, and I can still play the records. None of my CDs, I can’t play any of those anymore. Those are all messed up.”

DJ @annglaviano of Heatwave dropping in! Come on by!!!!!

In a digital age, Parker says people shouldn’t get hung up on any one format.

“I could be an evangelist for it and be like, nothing else sounds better and it’s warmer and it’s analog,” he said of vinyl records. “There are bunches of buzzwords that people throw around. I don’t think it matters. I think that one of the good things about records is for a hundred years we accepted that as a good format, lengthwise and quality-wise, as the way we can listen to music and we loved it.”

Want to know more cool spots in the Bywater? Click here for our neighborhood guide.