Admittedly, I haven’t strapped on a pair of roller skates since I was a child. My kids-size Mickey Mouse roller skates got somewhat of a workout as I rolled up and down my street, and at the occasional party at Skate Country, but I was never an expert. Even when I graduated to roller blades, skating was something I only did every once in a while, albeit very carefully, so as to avoid a skinned knee or a broken limb.

The history of skating rinks

I had all but forgotten about my roller skating days when I happened upon an HBO documentary called United Skates. Co-directed by filmmakers Tina Brown and Dyana Winkler, the film highlights the importance of roller skating in the Black community and what it means to the people, and the culture, that made skating what it is today.

Throughout the ‘60s and ’70s, skating rinks were places where Black people could safely gather and socialize, but that didn’t happen easily. Black people fought for their space at the rinks, staging protests and sit-ins and Black skaters, who frequented rinks, were the catalyst for the roller disco fad of the ’70s.

Since the ’80s, skating rinks have been a gathering place for Black people to celebrate themselves, and the rinks acted as a cornerstone of the hip-hop movement. Artists such as Dr. Dre, Queen Latifah, Ice Cube and Salt-N-Pepa cut their teeth performing at skating rinks.

Sadly, skate culture is one that is being pushed out all over the country, as rinks close. Here in New Orleans, two area rinks- Skate Country, on the Westbank, and Airline Skate Center, in Metairie, are working to keep skaters on their wheels, hosting a variety of Adult Night and “cheap skate” nights, so that people can get their roll on. 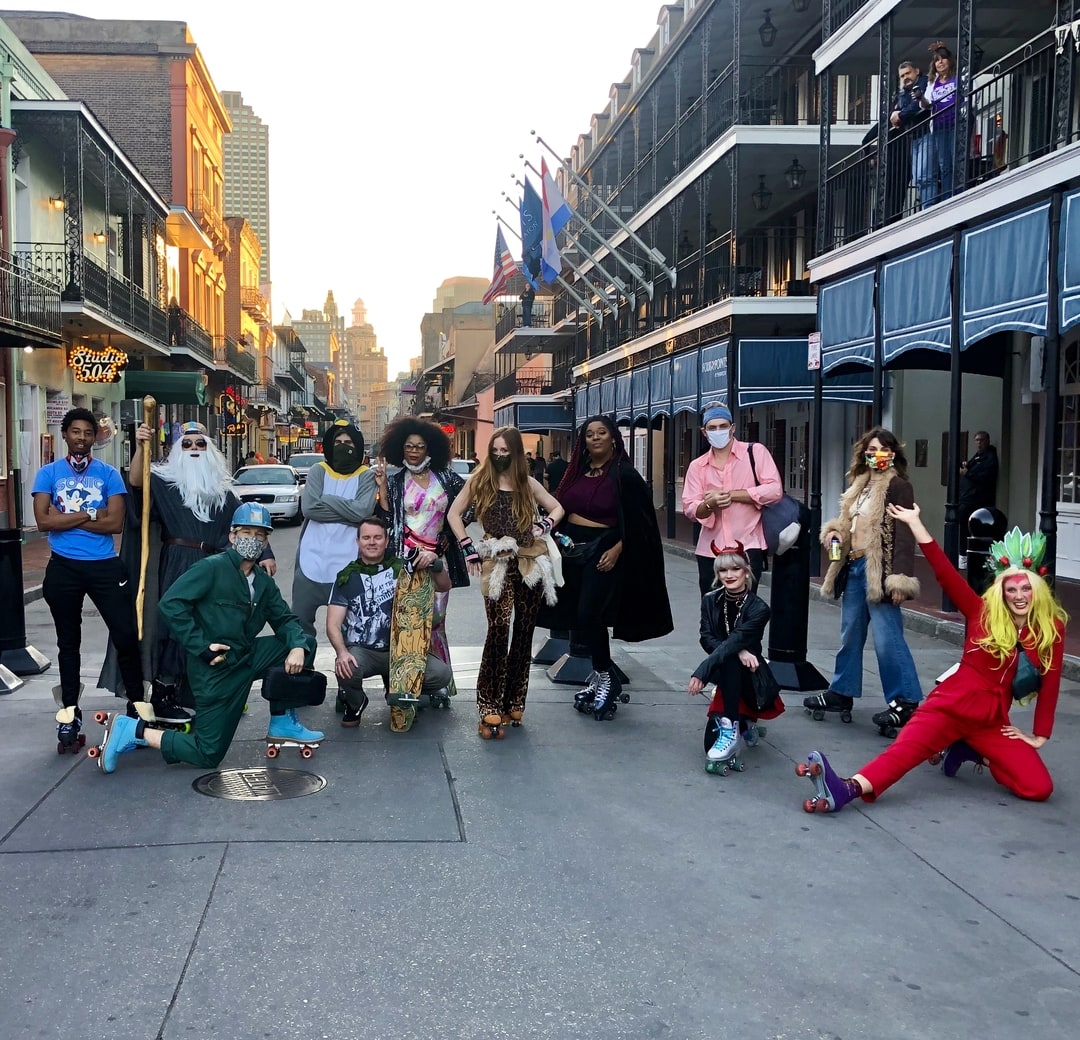 Bobby Bonsey is going one step further. When the pandemic put Bonsey’s regular gig as a photographer on hold, he knew that he wanted to fill his time by giving back to the community and by doing something fun. As a teacher, he knew that he could show his community how to do something in a safe way. 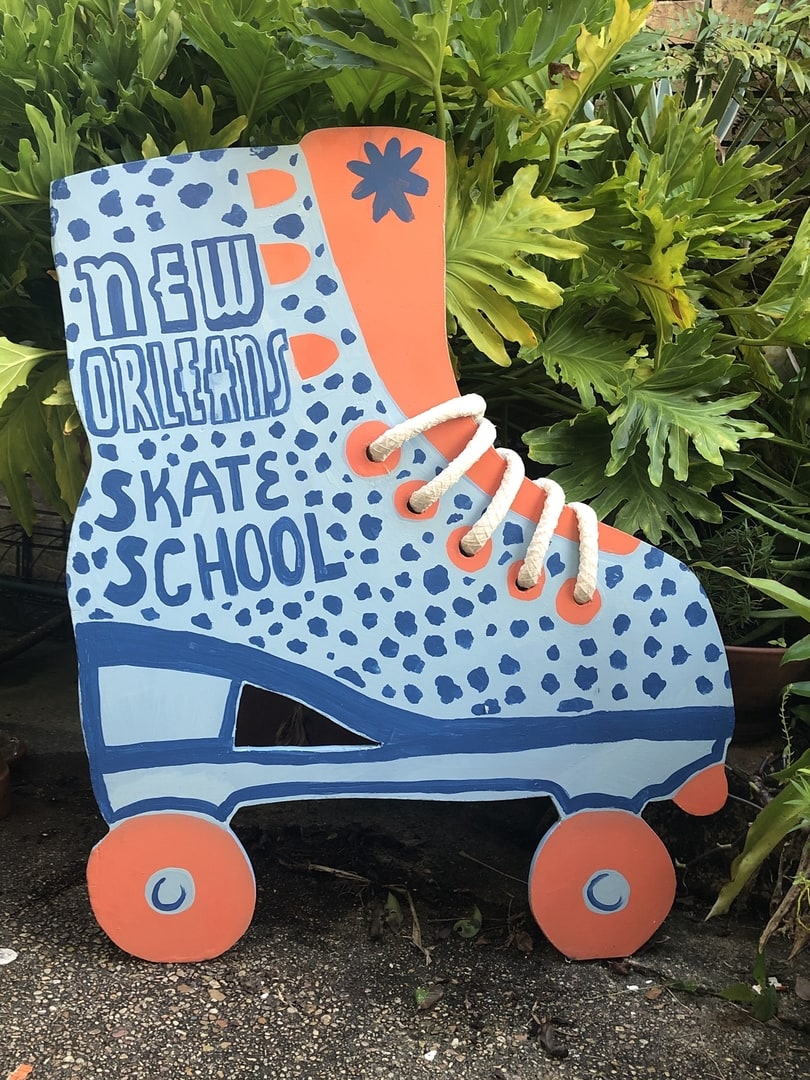 He opened New Orleans Skate School in mid-September and now teaches people, of all ages and skillsets, how to properly roller skate.

Bonsey, who hails from Anaheim, first became interested in roller skating as a fun, athletic activity and because of its close connection to dancing. Bonsey was a regular at Skate King in Seattle and, upon moving to New Orleans in 2012, took notice of the strong skate culture here.

“There was a lot of roller skating here and I noticed how much of it was ingrained in the community and I was eager to be a part of that,” he said.

Bonsey started teaching skating as something to do with his free time and it was important for him to do it right. Recognizing the connection between Black culture and roller skating, he wants to make sure that New Orleans Skate School reflects that.

He enlisted instructors that he met at Skate Country, to teach the importance of roller skating to the culture.

“I want the culture bearers to be a part of it,” he explained. “Black people are the reason for the skate movement and I want to have instructors that are enriched by skate culture. I want them to teach the culture, as well as the moves.”

Bonsey and instructors Malik Peters, Glynn Reneé, Darrin Ford, Chris Carradine and Yolanda Stalbert teach three levels of skating. The beginner class teaches how to skate and stop, the intermediate class shows more advanced routines, and, from there, students can go on to learn how different moves and tricks are incorporated into each other.

Bonsey explained, “This is a safe space for people to learn. We teach all the steps and break down the movements. We want each student to get exactly what they need from their instructor.”

Bonsey has made sure that his classes are neighborhood friendly and he wants to keep the classes small, in order to not en

croach on the space.

“Sharing space is important,” he said. “We want to feel good about what we’re doing and add to the community- not take anything away from it.”

In a short period of time, Bonsey has seen his skate school gain popularity, especially after receiving an endorsement from local music icon, DJ Soul Sister, on Instagram. Bonsey also credits his partner and co-founder, Louise Neal, with the design of the flyers and graphics.

“The post from DJ Soul Sister and Louise’s designs have really kicked everything up to the next level,” he said.

Bonsey is enjoying the success of New Orleans Skate School and he’s happy to be able to share skate culture with those who may not have been exposed to it. Because the weather is starting to cool down, there’s really been no better time to get out onto the court and learn some skating. In addition to the classes, Bonsey also organizes socially distant group skates, throughout New Orleans, usually once a month.

How to attend Skate School

Monday at 6 p.m. is the “beginners with Bobby” class which is perfect for newcomers or anyone who wants to review the basics of skating. Here you’ll learn gear knowledge, safe skill building drills, falling, stopping, turning, some fun moves to get you rolling right (Bubbles, Moonwalk) and a brief history of roller skating.

Tuesday at 4 p.m. is Groovin’ with Malik Peters. This all-levels class covers the essentials like warming up, stretching, balancing drills, technical spinning, and skill-building. There is a strong focus on rhythm, freestyle jam skating and group routines. If you’re looking to cruise in style this is the class for you.

Wednesday at 6 p.m. is Intermediates with Bobby. Expect to be on your toes where you will focus on the skills necessary for skating backward, strutting, manuals, various turns, spread eagles, slides, Crazy Legs and the Downtown. This is the class to take if you’re looking to learn some cool tricks!

Saturday at 1 p.m. is the Jam Class. This class breaks down popular steps like Strolls, Crazy Legs, Dips, Barrel Turns and different ways to spin. But be patient, some moves aren’t learned in a day.

Saturday at 2:30 p.m. is another beginners class that covers all the basics of learning how to skate.

A $10 donation is recommended, and you can find all of the details about class locations (including rain days) on the skate school Instagram page at www.instagram.com/neworleansskateschool/.

Because Bonsey and his crew are all about safety- skate pads, guards and a helmet are recommended. Bonsey also recommends you bring skates, a mask, water and thick socks to keep the blisters at bay.

Now that you have the low-down on New Orleans Skate School, strap on the wheels (and the safety gear) and hit the streets!