“The bees are angry today,” said Travis Thompson over the phone.

I wasn’t sure if he was joking or not, but I had borrowed a beekeeping suit for the occasion that made me look like a 1950s B-movie spaceman, just in case. He was giving me directions to the bee yards he tends down in Belle Chasse, or more accurately, Jesuit Bend, where the Mississippi River turns southeast toward the Gulf of Mexico. Here he produces Raw Honey New Orleans on a small sliver of land along the levee.

“I’m outside and I’m connected with my little reality with nature.”

Thompson says that Jesuit Bend is “like the opposite of English turn,” and when I ask him how it got its name he simply replies “Jesuits,” followed by a stout laugh. This laugh, and the big personality that accompanies it, are already familiar to many throughout New Orleans. Thompson has bartended at Port of Call — the French Quarter restaurant known for its hearty burgers, overstuffed baked potatoes and strong drinks — for two decades. That came to an abrupt halt in March as the COVID-19 pandemic forced restaurants to close and their employees to scramble. But for Thompson, the change wasn’t totally unwelcome.

“So I guess I’ve been trying to escape — not completely escape — but get out of doing foodservice industry stuff,” said Thompson, adding “I’ve been in the industry since I was 15. And I’m 42. So long enough to be like, ‘Alright, I’m done with it.’”

“You know, like, just staying drunk and high or whatever,” he said. “I know, it sounds like lies, but if anything, I’m holding back on it. And, I was good at that. But at the same time, I was saying, my back is going, my body’s going. It’s a young man’s job. It’s a very young man’s gig. You know, even though (making honey) is way more work, it’s not the same at all.” 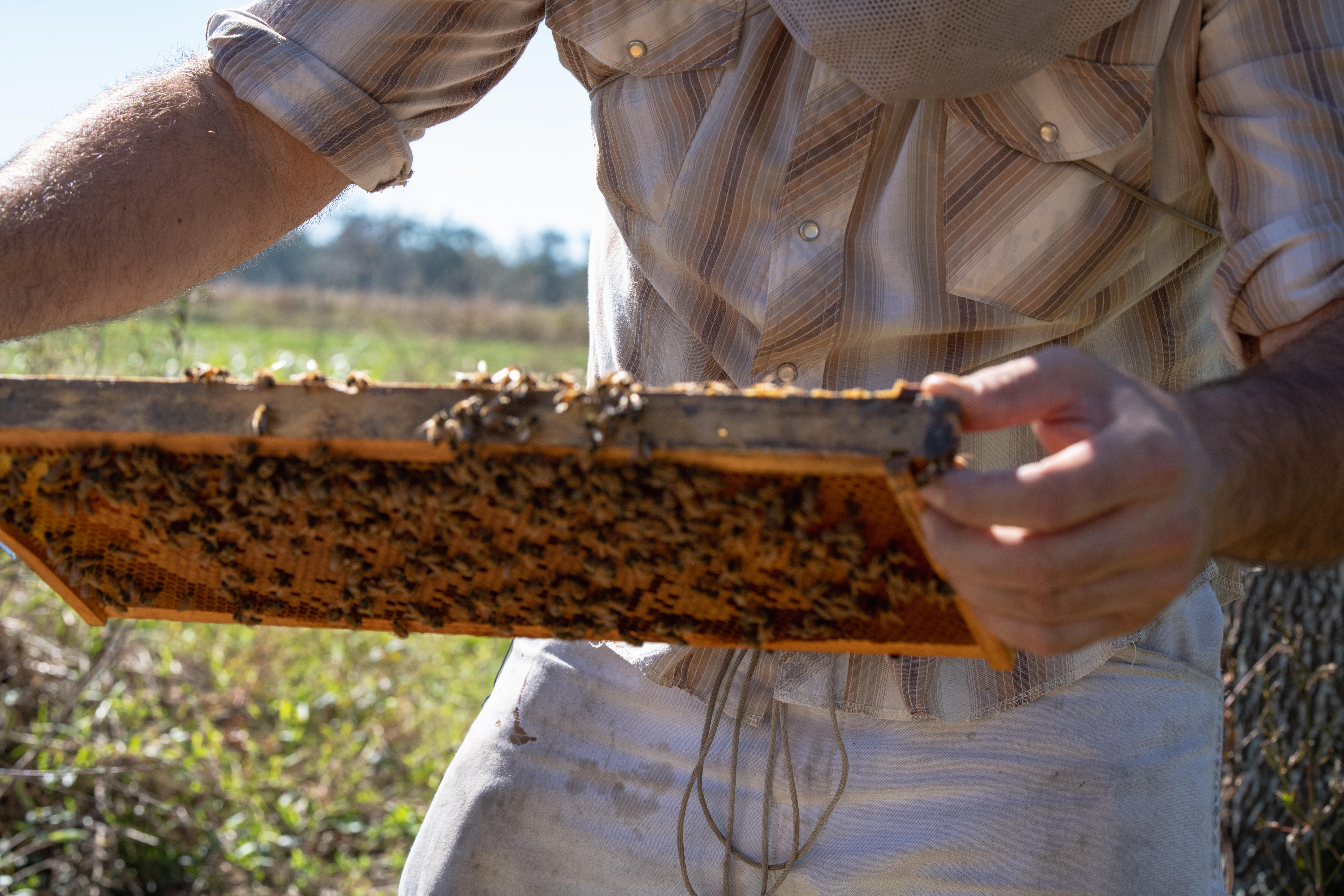 To say it’s not the same at all is an understatement. The sky is azure and the light is almost too bright for two former service industry workers having a conversation in the middle of a field. Thompson seems at ease, however.

While we’re speaking, Thompson starts to fill up a small, silver cylinder with newspapers and sticks on the tailgate of his pickup truck. The cylinder is attached to a bellows to facilitate air movement. He lights the contents of the cylinder and lets it smolder. It is a smoker and has the dual purpose of calming the bees and masking the scent of the keeper, thus allowing the keeper to work in the hives without getting stung. But getting stung is inevitable.

“So this is a bee stinger with the venom on it pumping into my wrist,” said Thompson’s friend and beekeeping assistant Megan Wiatkowski, showing me a picture on her phone.

Wiatkowski is a speech therapist as well as an apiarist and helps Thompson tend to the hives. She assuaged my fears of getting stung. I was certain I was going to end up like Macaulay Culkin in “My Girl” as I struggled into my bee suit, but I didn’t want to smell like fear. Wiatkowski and Thompson have been stung a lot, and seem inured to it. Thompson, brandishing a “hive tool,” which looks like a hook knife from a slasher movie, discusses the finer points of stinger removal.

“The bee leaves a stinger in you. It looks like a little teeny tiny horn. You do that to get the stinger out,” he said moving the tool in a scraping motion that seems counterintuitive. “Just like that. You don’t go like this (this being pinching at it, tweezer-like with your fingers) because you’ll push the venom into your system.”

Beyond removing stingers, the tool is used to open and remove the cells from the beehives. The cells are where the bees store both their wax and their honey, also known as honeycombs. Beeswax is an excretion similar to how humans sweat, and the honey, which is made from nectar, provides food for the bees. It takes approximately eight pounds of honey consumption to produce one pound of wax, so for the bees, building hives is intense work. As is hive management. Thompson has a knack, however, for explaining the byzantine process.

“There’s about a two-week period where they make way too much honey,” said Thompson while we walked among the tombstone-like hives that dotted the yard. He was breaking down what he called “the main honey flow.”

“So it’s like being a fisherman. Right? When the fish are running, you’re catching as many fish as you can,” said Thompson.

The fish in this situation is honey. When the bees have too much or too little, it isn’t optimal. So Thompson takes the excess and leaves the bees with enough to keep them happy and healthy. The harvested honey is then “spun-out” in a centrifuge and jarred. This is pure raw honey. It is then jarred, labeled and distributed.

“I was just interested in helping him get it out there, for him to be ready for that moment,” said Kevin Comarda.

Comarda is a high school friend and Port of Call coworker of Thompson who handles the distribution end of the business. They have been selling the honey since March of this year.

“I just offered to start delivering it so he could still tend to the bees. And it sort of kept me busy in the beginning of the lockdown and gave me something to do,” said Comarda.

Comarda also attested to the unique terroir of local honey.

The bees Thompson tends to pollinate Chinese tallow, goldenrod, blackberries and satsuma to name a few, and all these notes can be tasted in the honey.

But for Thompson, the most important aspect of production is ensuring the health of his bees, their environment, and his customers.

“It’s gonna be a lot better to eat a tomato that you know where it came from,” said Thompson. “And you talked to the farmer and he said ‘Yeah, we use natural fertilizer make this tomato,’ then some laboratory somewhere created genetically modified version of it that does better in this climate or whatever reason. Is that a tomato anymore?”

“I’ve always been punk rock about everything in my life,” said Thompson. “You know, I’m just gonna do it. I’m gonna do it this way. This is the way I like doing it. And it tastes awesome.”