She grew up helping her dad cook jambalaya at French Quarter Fest, now she has her own line of meal kits.

Summer is almost here and that means (socially distant) cookouts, small gatherings and enjoying time with a tight group of friends (or maybe just folks with whom you are quarantining). Whatever your plan, it’s New Orleans, so good food is on the menu.

Full disclosure: as much as I love to eat, I’m not the world’s best cook. I know how to make some basics and I can cook enough to keep myself alive, but I’m no gourmet. I’m your typical Louisiana lady who loves her red beans and rice, gumbo, and, of course, jambalaya, but I usually prefer someone to cook it for me. When a friend introduced me to Jambalaya Girl, a local woman-owned company that makes Louisiana cooking a breeze, I just had to check it out. If I can whip up one of these tasty meals, then there’s hope for all of us.

Before I took to my own kitchen, I wanted to learn more about jambalaya girl herself, Kristen Preau.

Who is Jambalaya Girl?

Preau is a New Orleans girl who was raised in the East. The food biz is in her blood; she grew up helping her dad cook jambalaya at French Quarter Fest and it’s here that she earned the catchy “jambalaya girl” nickname.

“My Dad was a small business owner whose company made outdoor cooking equipment for a lot of the chefs in town,” Preau said. “I was no stranger to the food business, or jambalaya, which I grew up cooking in my dad’s cast-iron pots. I’ve had the nickname ‘Jambalaya Girl’ since the first French Quarter Fest, when I was the little helper to my dad and Joe Cahn, the founder of the New Orleans School of Cooking, at their Jambalaya Food Booth. Fun fact: we still cook with the 40-gallon cast-iron pot that they used back then.”

Jambalaya Girl got its start in philanthropy after Hurricane Katrina. Driven by the need to do good and help others, Preau found that spreading love through food not only helped her raise money for those in need, but brought the taste of New Orleans to people who missed it.

“The inspiration came the days after Hurricane Katrina,” she explained. “I created a tailgating fundraiser that raised more than $100,000 for New Orleans by serving jambalaya for donations at football tailgates all across the country, including Auburn, Ole Miss, University of Louisville, Tennessee and the University of Louisiana at Lafayette, to name a few.”

She continued, “The supporters of this fundraiser were amazing. First, they wanted to talk all about New Orleans and how much they love and miss the city. Then, after taking a bite of the jambalaya, they wanted our recipe! That was my ah-ha moment- how do I connect with these people again and bring them our taste of New Orleans?”

Preau’s love for New Orleans was her drive, having previously worked at the Superdome, for University of New Orleans Athletics, and at one of the top ad agencies and top architecture firms that focused on the city’s cultural heritage. She saw Jambalaya Girl as a way to spread her love of New Orleans to locals and beyond.

Preau officially launched Jambalaya Girl in February 2010, and she hasn’t looked back.

Jambalaya Girl offers delicious home-cooked meals that are quick and easy to prepare in your own home. The jambalaya is inspired by Preau’s dad’s cast-iron pot recipe and the gumbo comes from her mom’s recipe. She was taught to cook New Orleans style by keeping the focus on the flavor, and flavor is what she packs into every box. 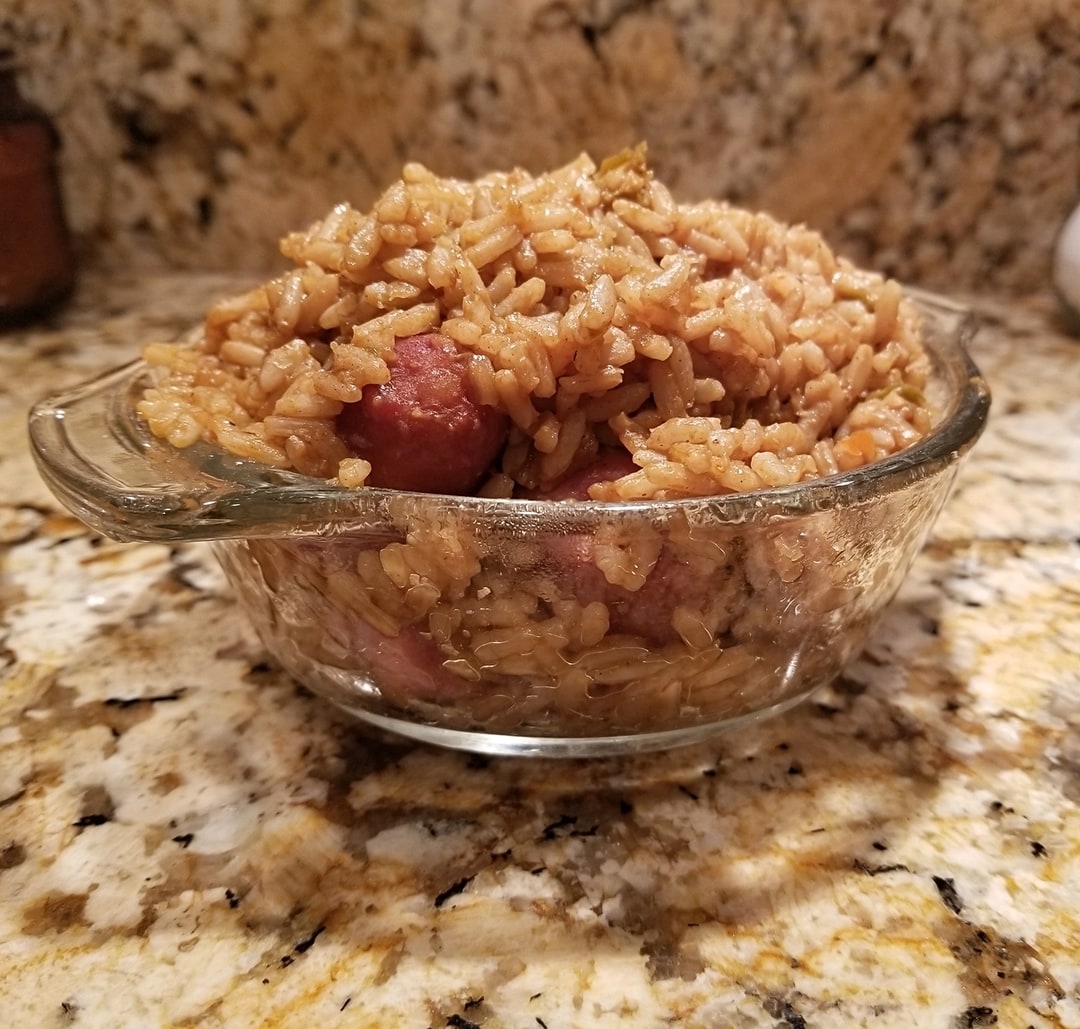 The recipes used for Jambalaya Girl are originals, thanks to Chef George Rhode IV, and the products are blended and packaged at Chef Paul Prudhomme’s Magic Seasoning Blends in New Orleans.

Preau’s goal is simple: she wants to share the taste of New Orleans with the world and help create local jobs. She wants people to associate New Orleans food with good food and not necessarily spicy food.

“There’s a big misconception about New Orleans food outside of the market – so many assume it has to be spicy hot,” she said. “It drives me crazy when people throw a bunch of cayenne or salt in a box and call it New Orleans. I want our flavor to represent authentic New Orleans, help build an even bigger market for New Orleans-made products, and keep the jobs local for New Orleans food manufacturing.”

I made some Jambalaya Girl jambalaya for myself, my dad and my fiancé, and it couldn’t have been easier. Basically, if you can boil water, you can make delicious jambalaya in a snap. I added my own sausage and dinner was ready in about 30 minutes. I love that all the good flavor and seasoning is already in the mix and it made for a delicious meal.

Jambalaya Girl products are easy to find at local markets such as Rouses, Winn-Dixie, Breaux Mart, Dorginac’s, Lakeview Grocery, Canseco’s and many more. For the full list, check out https://jambalayagirl.com/pages/find-a-store.