Before I knew Monica Rose Kelly’s name, I knew her art. I’d jogged past her wraparound mural on Elysian Fields and St Claude dozens of times, I’d eaten tater tots in the booth next to her painting of fire dancers and brass instruments at Dat Dog, I’d raised a glass to her fabulous women on the walls of the NOLA Brewing Tap Room, and a tropical colored Fillmore concert poster hung framed above my desk. Monica Rose Kelly has softly stamped this city with colorful hues and big, bold brush strokes.

I find myself missing the purples and greens of that gorgeous Fillmore poster on my wall, so I ask her about the creation of that first.

“As an illustrator, first and foremost, creating posters for the Fillmore was one of the highest honors of my career,” she said. “I grew up listening to records from the 60s and 70s. I loved the psychedelic art from that era, so when I finally got to create those pieces it was awesome to be able to channel that style and make it my own. On the grand opening poster, I featured a friend of mine who’s a revolutionary force in the music scene. She’s carrying this banana flower like a spirit stick. The second poster featured the GM of the Fillmore who is a strong woman. I really look forward to continuing this series someday.” 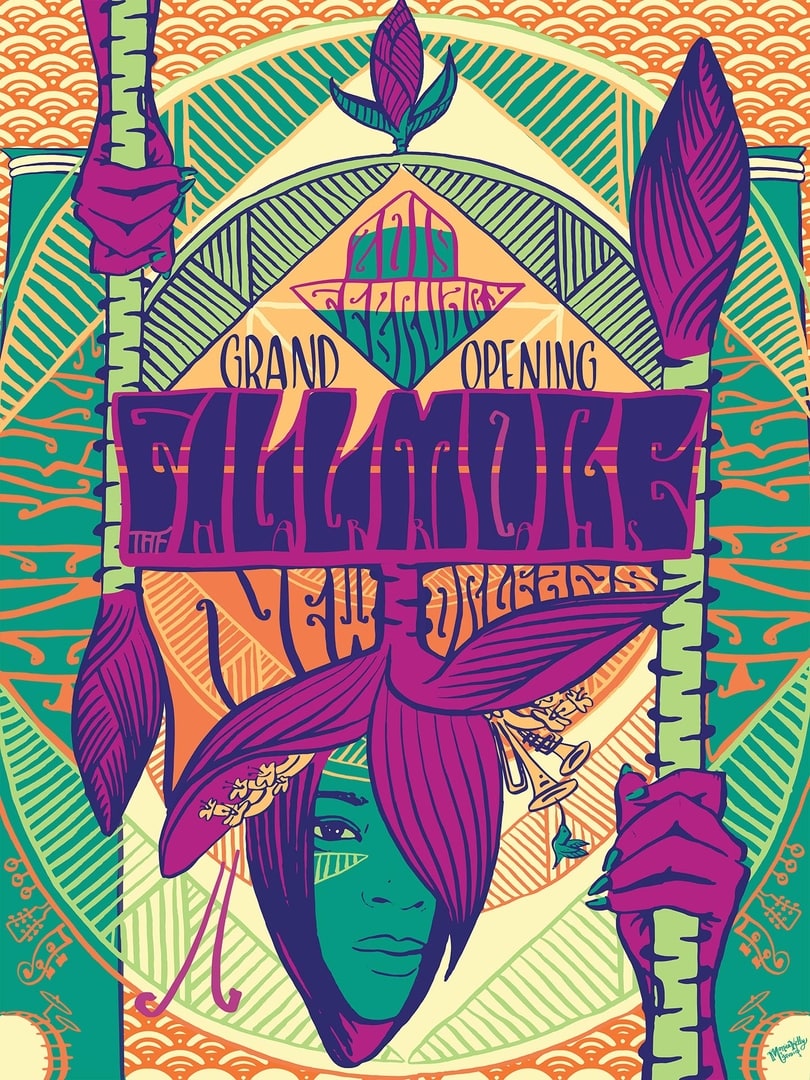 The Fillmore isn’t the only venue around town that Monica has loaned her skills to, so I ask about the others.

“I love the Joy Theater,” she said. “Everyone who played there was so funky. I created all their posters for a while and exhibited my paintings there, also creating some stage installations. They held one event to ‘Celebrate the Women of the Scene’ with such amazing, dope women in the lineup– Boyfriend was one of them amongst other friends. They all sang the song ‘I’ve Got Work To Do.’ I’ll never forget that ‘cause it’s such a ‘man-going-to-work’ song and to have these women performing it– it was just everything. During the show, I created this live painting about riding the overwhelming waves of music during Jazzfest.”

While Monica creates pieces for arts businesses, she also partners with many local charities, often donating the upfront costs.

“My first partner was with People United for Armstrong Park,” she said. “I was the Art Director for that festival for four years. I created all the posters, signage, and stage backdrops. It was such a joyful experience because it was the first festival to open up in Armstrong Park post-Katrina. The park had been closed for so long and we brought people back to celebrate music. That was a cool situation because I donated some designs but they let me run the merchandise as a third party, so I could make money that way and donate a percentage back to the nonprofit.” 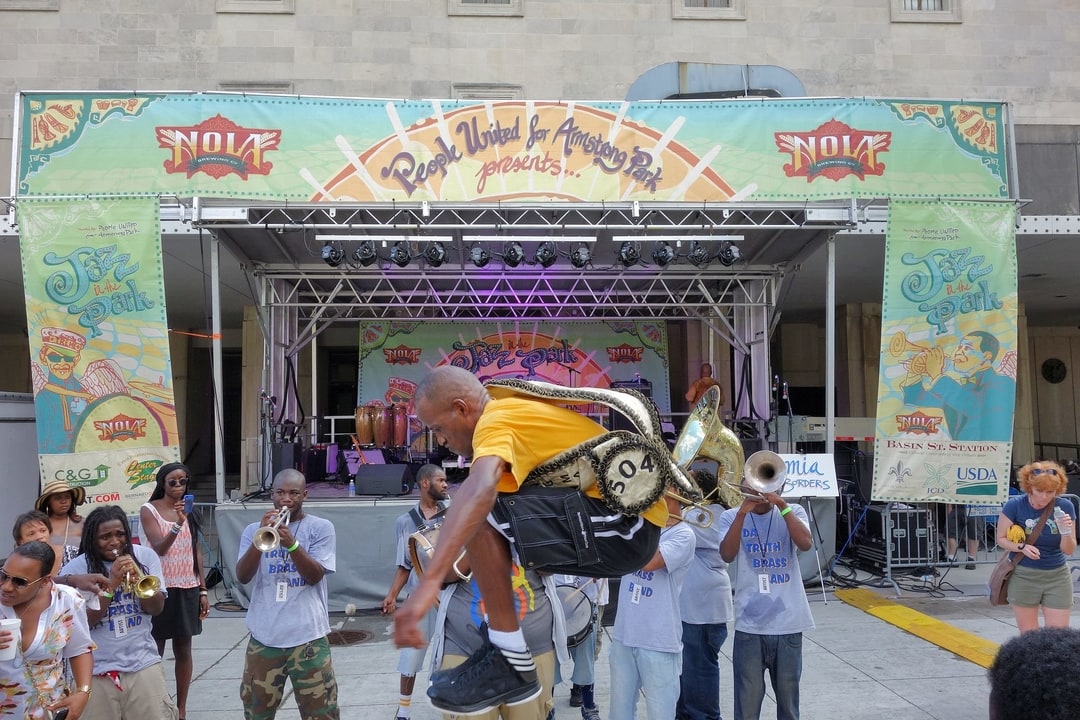 When Monica lived in Savannah, attending SCAD, she learned how to breakdance and had a crew who welcomed her warmly. A lifelong fan of hip-hop in all of its iterations, this stage of her life fed her love of street art, especially as some of the B-boys used to take her out painting trains. It’s no surprise that she threads this inspiration through some of her mural work and was inspired to collaborate with a local dance studio.

“I’ve worked with Dancing Grounds for a long time,” she said. “They started as a studio in my friend Laura’s house. We’d throw these amazing art parties with different artists, bands, food and cocktails. From these events, we raised some of the seed money for what is now the Dancing Grounds Studio on St Claude. I really believe in them because they create a safe space for youth to express themselves creatively. They let young people choreograph their dances and create their own festival, and it really comes straight from their hearts and their minds — not remediated by adult thinking. They’re awesome.”

Everything Monica is passionate about is something she stands behind. She doesn’t just talk about inspiring youth and call herself a feminist– she truly supports other women, as well as selecting a talented young woman to mentor artistically, every single year.

“It’s a small group of female artists painting murals in New Orleans and I would love to see more,” she said. “There’s Jessica Strahan. She’s going to be painting one of the upcoming Helis Foundation murals, which is very exciting. She definitely deserves that. Some other female muralists painting in town are Kentrice, Swan, Kate Hanrahan, Skela, Lillian Aguinaga, Danielle Hein, and my sister Madeleine. There’s really not a lot of us. Training up female muralists is really important.”

Monica goes on to tell me about the women who train with her,  which is apt, as, while we’re speaking, she and her current apprentice Tyla are repainting the mural on Elysian Fields and Esplanade, a portion of which was recently tagged over. They are adding roller skates and lilies and curls, as the model has actually grown an afro since the painting was originally done and she is now emanating a Goddess-like calm and joy.

“We’re only just beginning to penetrate the boys’ clubs of every industry,” she said. “So, I have an apprenticeship program at my studio where I train young women in the arts business. Depending on their interests, I’m either teaching them mural painting, studio production or graphic design. Right now I have a young muralist named Tyla Maiden training with me. She runs her own business already, so she’s very equipped and she’s been doing a great job.”

A post shared by People for Public Art (@peopleforpublicart)

When I ask Monica what her most important piece is, she’s split between two that are extraordinary for very similar and very different reasons. The first is a collaboration with Nik Richard, on the neutral ground of Galvez between Canal and Tulane.

“The Spirit of Lower Mid-City’ is a permanent public art installation,” She said. “Twenty-two steel panels, each 4×6 feet, tell the history of the neighborhood. The People for Public Art Instagram tells the meaning of each panel, depicting a narrative that shows windows from the past, the spirit of healing with empathy, and a neighborhood that was demolished.”

A post shared by People for Public Art (@peopleforpublicart)

Her other piece of great pride is a memorial for the three lives wrongly lost in the collapse of the future Hard Rock, made in collaboration with artist Antonia Zennaro and a large team of women. The history of the art itself is fraught, as Hurricane Zeta tore down the stunning collaborative multi-media panels 17 days after the install.

“This enormous work was hanging for the whole city to see, but now it’s draped across my living room,” she said. “We’re trying to get it reinstalled, but at least, we have a cool video of the memorial right before the storm hit. I spent a lot of time with the families, hearing their stories, and really tried to communicate their feelings in the piece. It was a huge honor to receive a Community Culture Award from these people that now treat me like family, and that affirmation has inspired me to press on [despite the setback.] These projects inspired the creation of People for Public Art, our new public art collective in formation.”