The Lakefront, Lafitte Greenway, the river levee, and the ferry loop are on the list

I remember visiting San Francisco a few years ago. I rented a bicycle to get around, walked out of the bike shop and buzzed around town, for like two minutes.

Then I got to what can only be described as a mountain. Yes, it was paved and yes, there was a bike line, but — trust me — it was basically a mountain.

And — kind of like poor Sisyphus — there was no way this bicycle were getting to the top.

I locked up the bike to the nearest street sign and — just like Sisyphus — called myself an Uber.

But, friends, I have great news. You’re not in San Francisco. You’re in New Orleans, where the tallest “mountain” is a whopping 27 and a half feet above sea level and — according to a 2011 NOLA.com article — was made “of rip-rap left from the construction of Interstate 610.”

It may be hot, but you’re not going to have to work nearly as hard as other places. So, make like this dog and hop on a bike!

New Orleans has some nice scenic options for a bicycle adventure. Here are five favorites, from easiest to most strenuous.

At only 1.4 miles long (one-way), the Bywater’s Crescent Park is perfect for a super relaxing out-and-back.

You can enter the downriver end via Mazant Street and park your car in a park-specific parking lot, or you can leave your car on the street near the upriver end and enter via the pedestrian bridge at Marigny Street (which includes an elevator so you don’t have to lug your bike up the stairs).

Even in a city that is famously flat, Crescent Park stands out as the perfect spot for a leisurely ride. I’ve seen lots of kiddos with training wheels, so consider this bike route good for bike enthusiasts of any age.There’s diverse and beautiful flora to admire, plenty of open grass to relax in, two wharves to walk out over the mighty Mississippi, and the top of the“Rusty Rainbow” pedestrian bridge at Piety Street offers excellent views of the river, park and city.

Are you hungry? You can even lock up your bike and walk over the bridge to Bywater staples like Pizza Delicious and Bratz Y’all — both right next to each other on Piety Street.

The land on which the Lafitte Greenway resides has been a transportation corridor since the 18th century. The economically essential Carondelet Canal (aka the New Basin Canal) allowed ships to reach downtown New Orleans from Lake Pontchartrain as early as 1794. In the 20th century, it was a portion of the route for the Norfolk Southern Railroad.

Since 2015, the space has been a 2.6-mile bicycle and pedestrian path that extends from Louis Armstrong Park just outside the French Quarter, across Bayou St. John and nearly all the way to City Park.This path rolls through several neighborhoods and is perfect if you’re heading between downtown and Mid-City. You’ll pass tons of other cyclists, joggers and pedestrians, a series of busy sports fields, the scenic Bayou St. John, bustling Carrollton Avenue, and a growing list of establishments to grab a well-earned snack or drink, including HEY Coffee, Wrong Iron, Frey Smoked Meat Company, and Second Line Brewing.

This ride is technically in Metairie, but it begins on the New Orleans border, just to the west of the 17th Street Canal in Bucktown. Head up the road to the Bucktown Marina and you’ll see the start of the Lakefront Trail to your left. If you have a car, you can park it in the lot beside the trailhead, and then it’s off to the races!

If you head west to the trail’s completion at the Duncan Canal, you’ll end up with a satisfying 24.8-mile round trip adventure!

Nearly the entire path hugs the vast Lake Pontchartrain, which means you’ll be treated to nonstop beautiful views, but also have to handle some wind. There will be plenty of other cyclists, and the trail really is a treat, but if you’re biking during sunset (which is a beautiful time to bike), you also might have to contend with some bugs to the face. For that reason, I prefer to ride this trail in the early part of the day.

The Lakefront Trail allows you to bike through a part of the metropolitan area you may have not known existed. Not only can you enjoy the view of marinas to the right, but — especially in Bucktown — there are some classic restaurants to try out.

Station 6 is back and just a stone’s throw from the trailhead, and R&O Restaurant is a neighborhood institution. Looking for a post-ride treat? Daiquiris & Creams has you covered!

Alright, you’ve biked along the lake. What’s next?

There’s a long stretch of bike path that extends from the western/upriver edge of Audubon Zoo and The Fly all the way to Bonnet Carre Spillway in St. Charles Parish! If you take that entire route, and then make the return trip, it’s a hefty total of 54.2 miles.

The path is really well-maintained pavement, is totally free of motor vehicles (minus the occasional police officer) and provides miles and miles of fantastic Mississippi River views.

If it gets windy (which it often can), you’ll be battling that wind for at least half of your trip. Also, there are times where those views of the Mighty Mississippi give way to less beautiful — but still breathtakingly massive — industrial equipment.

There’s not much shade along the route (which is a true of all of these trails) so make sure to pack some sunscreen and plenty of water. There’ll be gas stations along the route to fill up your water bottle, but also a few must-stop watering holes and eateries to hit up.

The Rivershack Tavern will come up early in your trip and has a great selection of beers and tasty bar food — notably the buffalo shrimp! Once you hit St. Rose, you’ll want to make a stop at St. Rose Tavern for drinks and a bite (don’t worry about all this eating — you’re burning a lot of calories!), as well as the divey Boomerang — which has a single Yelp rating (1-star) that reads, “It was stuffy and smelled like old underwear. It was a dark muggy abode where shadows seemed to jump at you.” So, obviously, you’ve got to go!

Then, once you’ve completed all 54.2 miles, you can celebrate your accomplishment with a dozen oysters and a pint or two at good ol’ Cooter Brown’s.

This final route is an approximately 45-mile loop for the very-adventurous at heart.

This route begins and ends at the Canal Street Ferry terminal, but you’re going to need to also cross on the Scarsdale/Belle Chasse boat.

What’s the best route to do this? That’s very difficult to say, as St. Bernard Parish is currently installing hundreds of miles of bikeways across their Parish. But this is how I do it, and where I tried to place the route on this Google Map image: 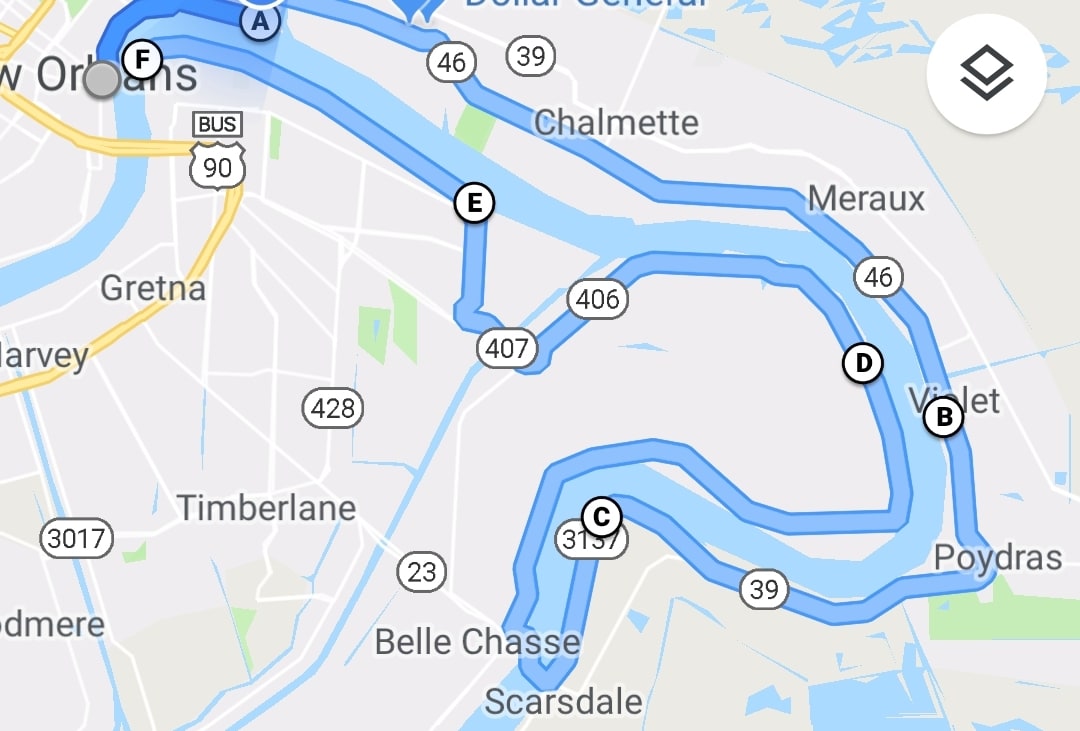 (Note: there are plenty of places to cut mileage, but I do my best to follow the winding course of the river.)

From the Canal Street ferry terminal, you can bicycle through the French Quarter along Decatur Street or the riverfront park. Decatur Street will eventually end and dump you onto Chartres Street, which you can take all the way to the end of the Bywater.

Catch the ferry across, and then make a right onto River Road and follow it — it will become Patterson Avenue — to Woodland Highway to cross the Intercoastal Waterway (crossing the Intercoastal is the one time you won’t be following the course of the Mississippi). You’ll then take a right on Woodland Drive all the way up to a levee bike path on the river, which you can take to the Algiers Point Ferry terminal. Take the ferry across and you’re back to Canal Street!

There are tons of great food options along the way (hello, Rocky and Carlo’s!), but this is no easy trek. You’ll definitely want to review your route beforehand.

Don’t think you’re up for the full trip, but still want to bike on the West Bank? Follow the “Best Bank’s” levee trail from the Algiers Point Ferry terminal all the way to Gretna and stop for a beer and generous happy hour menu at Rivershack Gretna. One-way is just under three miles, so this is much more leisurely adventure than the 45-mile loop!

That’s just the tip of the iceberg. There are plenty of other trails — of varying degrees of intensity — to explore. For example, did you know about the bike path connecting the communities of the North Shore (as well as its many breweries)?

The New Orleans metro area is becoming increasingly bike-friendly. And, considering how little elevation we have to contend with, we should all follow the example of this gorilla: