In the daytime it’s not as creepy, but beware, the ghouls come out at night.

On Oct. 17, the Cajun Country Corn Maze in Pine Grove, Louisiana kicked off its 21st season. Cajun Country Corn has been operating as a corn, soy, and sorghum farm for 40 years, and in August 2000 they teamed up with the MAiZE company to design and plant their first corn maze. It was in the shape of a crawfish with that old refrain “Let the good times roll!” in the center. This year, the maze reads “United We Stand” above a circle of people holding hands around a globe — a symbol of the fight against COVID-19.

Pine Grove is about an hour and a half from New Orleans in Livingston Parish, along a route that really makes it worth the journey. You wind along an elevated highway through marshland for much of it, first along the edge of the Maurepas Swamp, then on the stretch of Route 55 that runs right between lakes Maurepas and Pontchartrain, where we had the fortune of spotting a bald eagle atop a spindly cypress. Continue on 55 just past the obscene-sounding town of Tickfaw, take 40 to 16, and before you know it, signs reading “CORN MAZE” have appeared on your left. 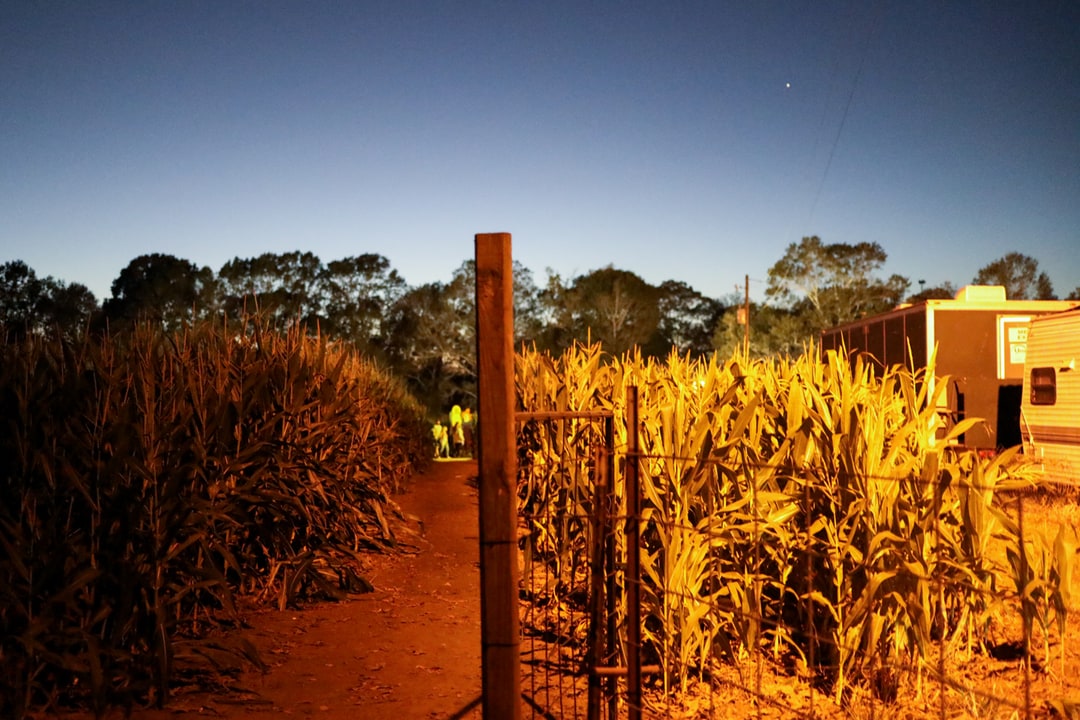 My friends and I timed our arrival for sunset when the haunted version of the maze was supposed to get underway. Sadly, we were informed that that portion of the festivities was not quite ready for opening night, but we took comfort in our half-price tickets (the haunted activities, which include the haunted maze, haunted trail, haunted bus, and haunted pellet maze, cost $20; we were only charged $10 for the non-haunted maze and a token to ride the cow train). Cards are accepted at the ticket counter, but only cash is accepted at the concession stands inside. Full package and pricing info is available here.

While we didn’t get the full haunted experience, it turns out it’s pretty spooky to make your way through even a regular labyrinth in the middle of nowhere when it’s pitch dark outside (it had been a new moon just the night before!). The scariest part, however, may have been the uncomfortable lack of masks and social distancing, despite the maze being themed around the fight against the coronavirus. Cajun Country Corn makes its COVID-19 position clear on its website — staff are given health screenings, and members of the public are recommended to stay home if they’re not feeling well. 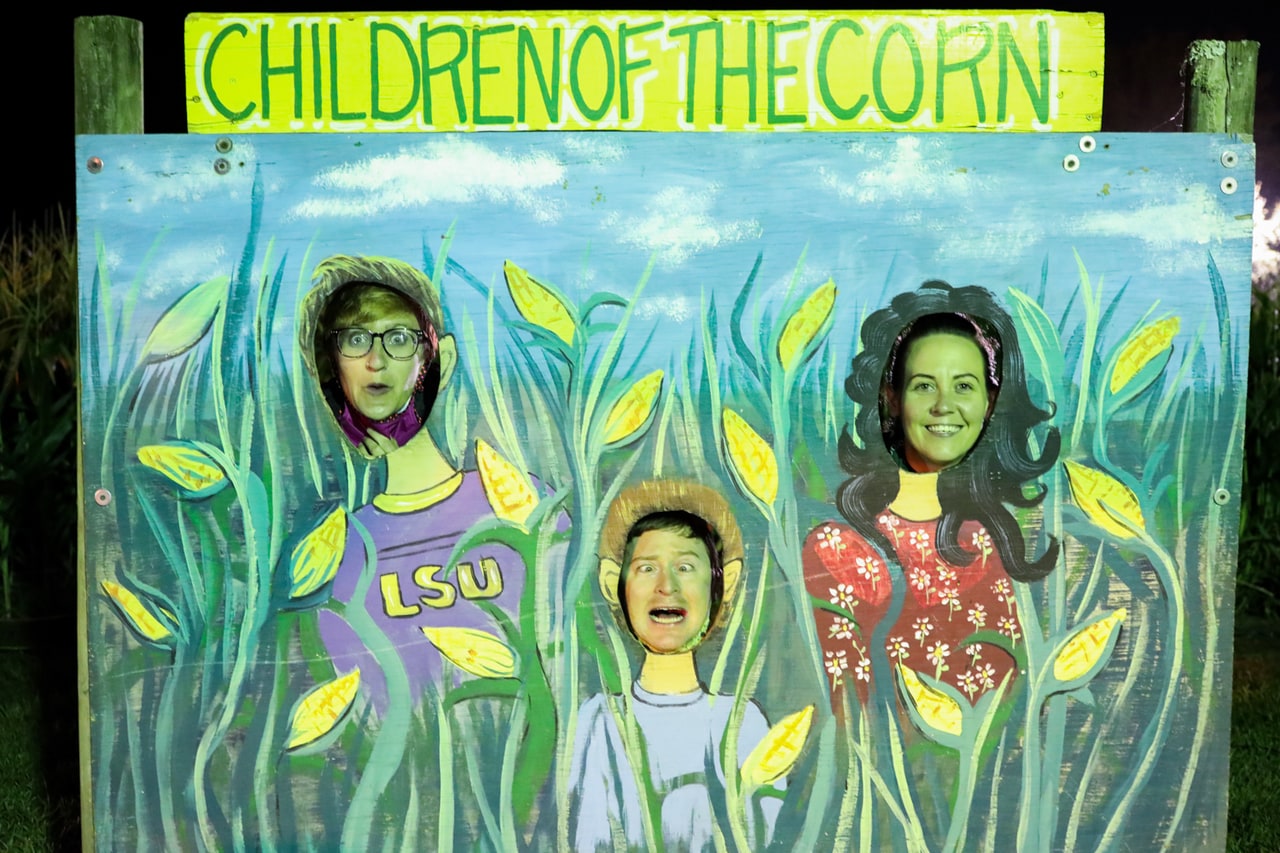 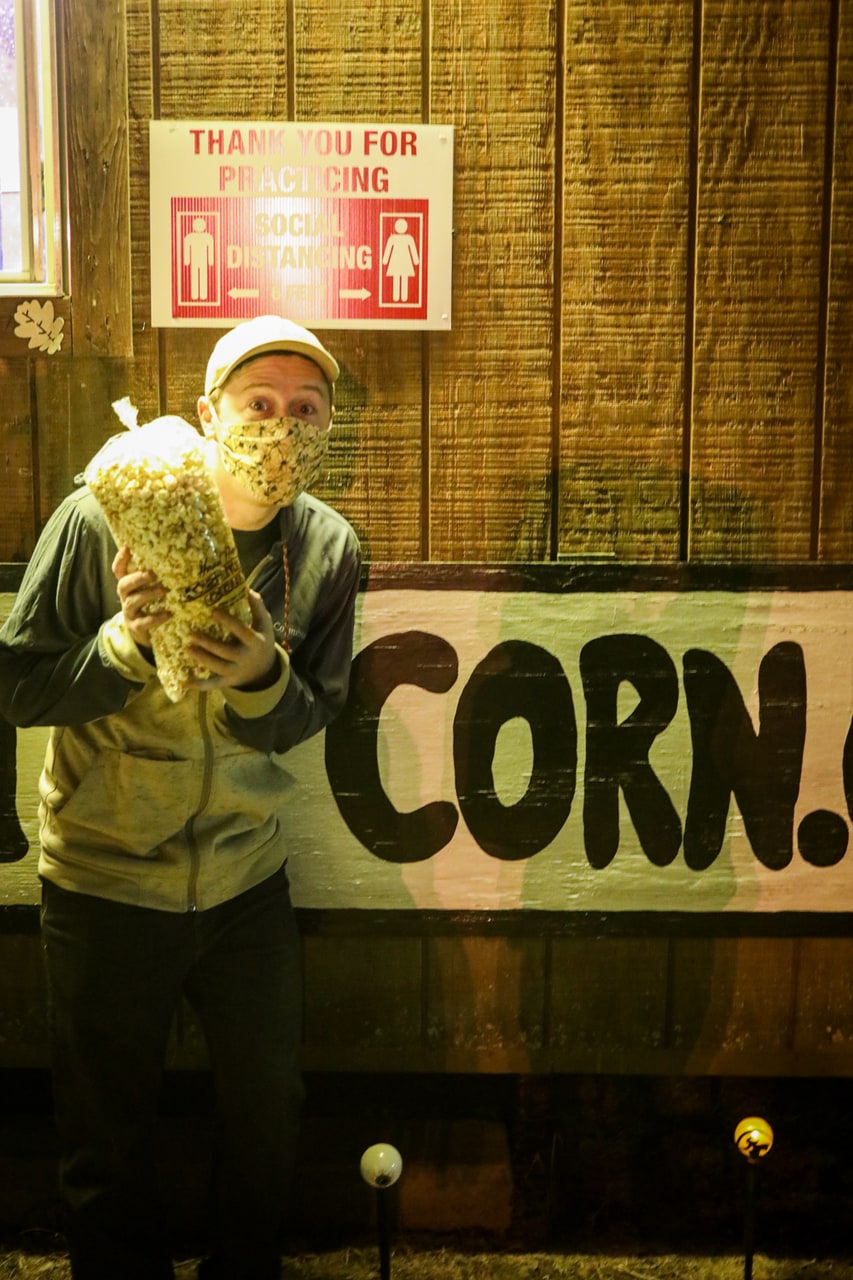 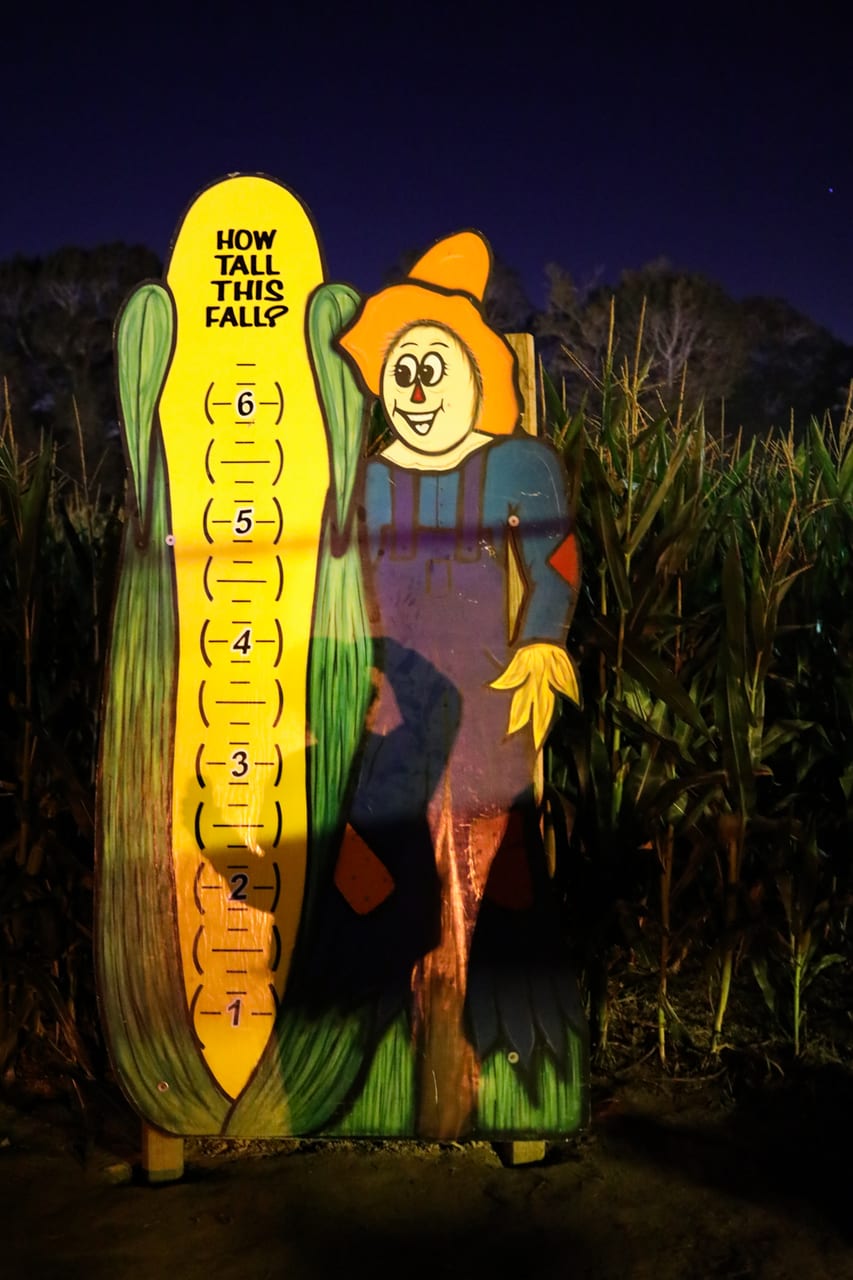 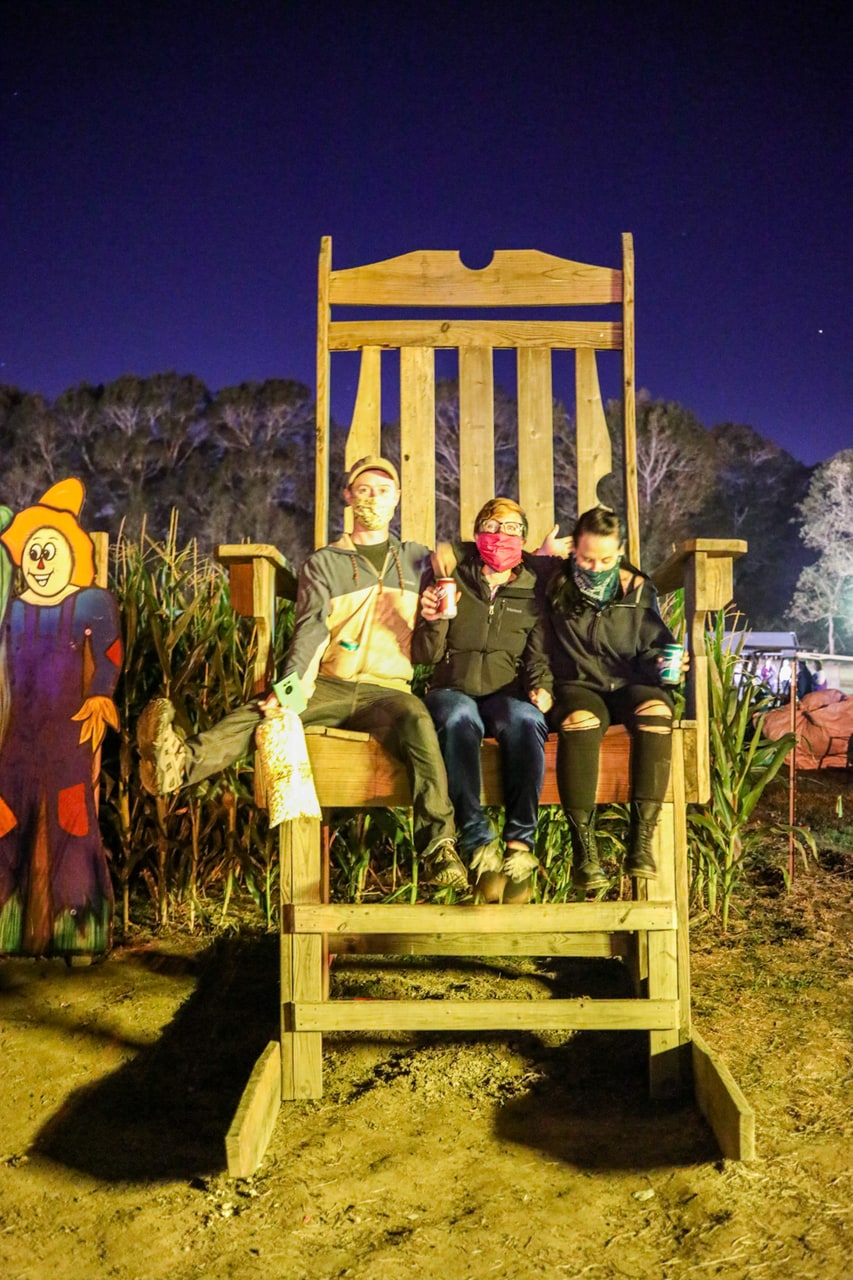 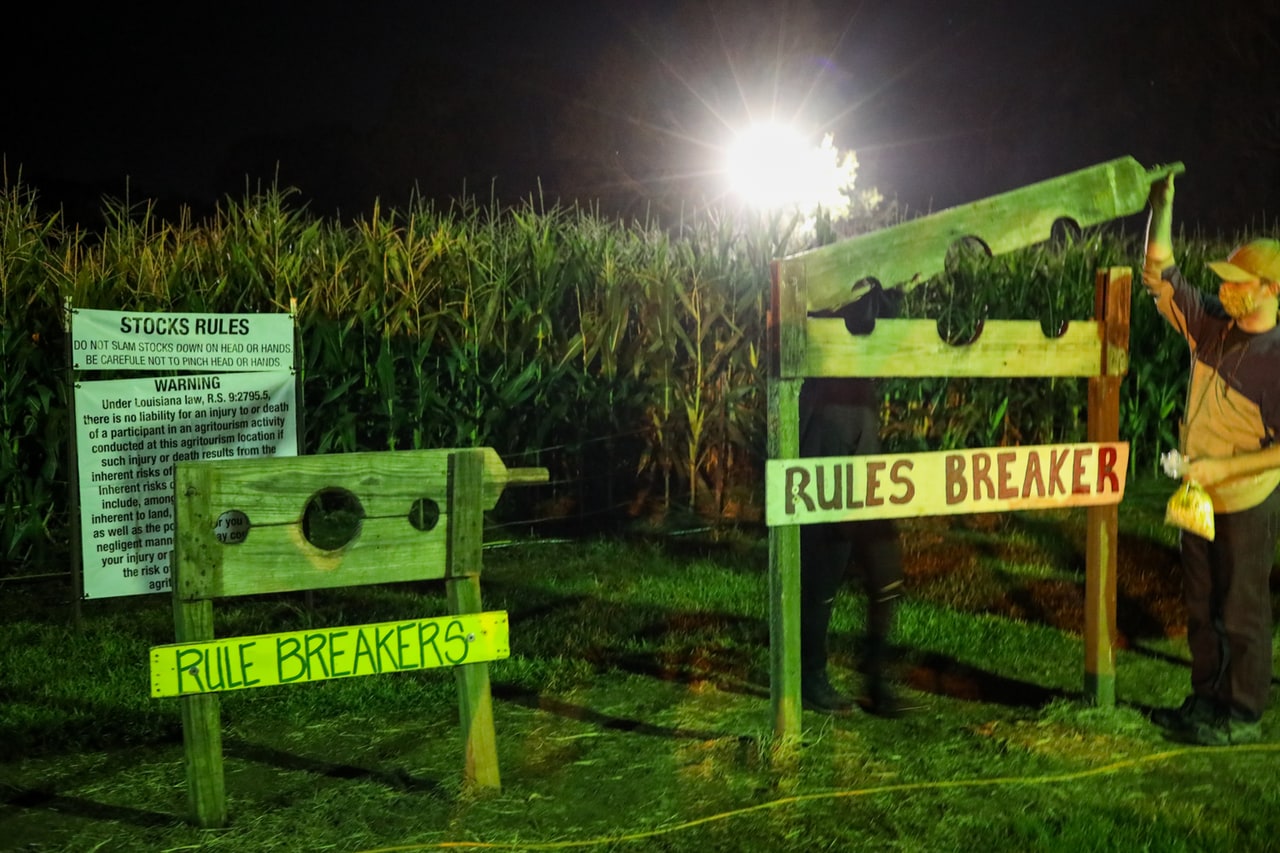 While masks aren’t a requirement, they are encouraged — and let’s be honest: it just makes good sense, according to health experts nationally and globally. While our New Orleans-based crew were in masks the whole time, not everyone at the attraction follows suit. The lines for tickets and concessions could feel too close for comfort, and even in the maze itself. I should note that Livingston Parish’s percent-positive rate for COVID-19 is on the rise and was at nearly 10% for the week of October 7-14, per the latest information available from the Louisiana Department of Health. Take all these things into consideration when venturing out here or anywhere right now in Louisiana.

Also of note is that it’s a family-oriented venue and we were slightly out of place as a group of 30-somethings. Which is not to say it wasn’t enjoyable as a 30-something, but merely that attendees should be prepared for kid-centric activities (our tokens for the cow train– a succession of oil-drum cars decorated as cows, whipped around behind a tractor– went unused), many a shriek from giddy high schoolers, and a concession stand whose only beer is root beer. 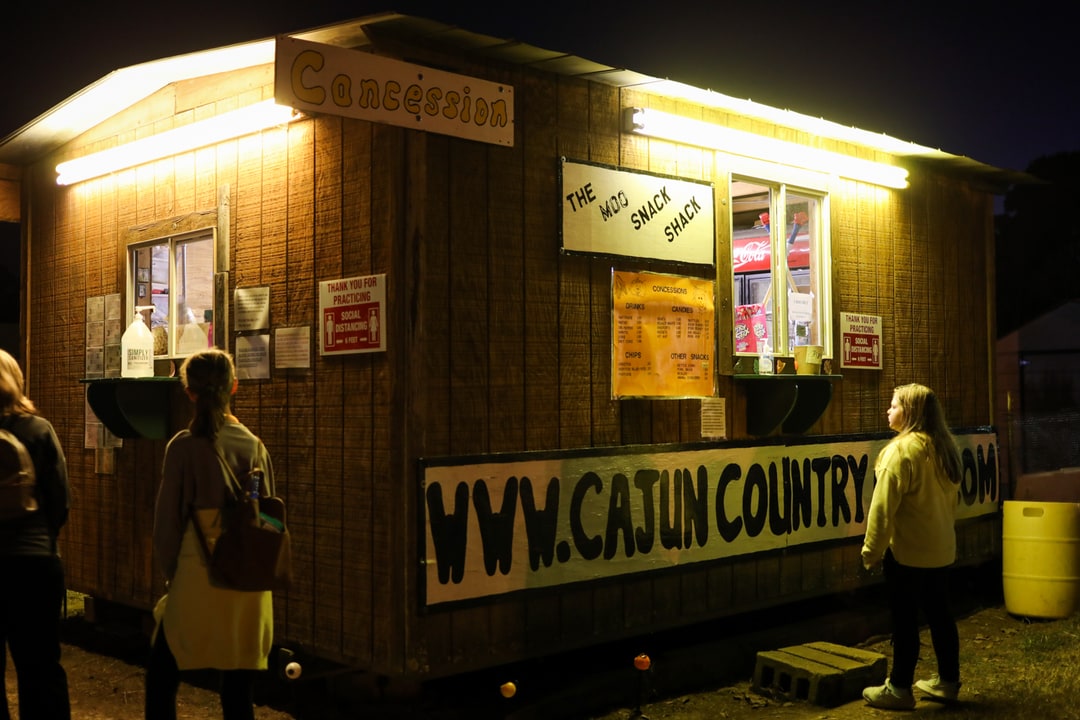 Which was alright: we certainly needed our wits about us to navigate the darkened paths. Sticking with the theme, the two paths the maze offered were called Phase 1 and Phase 2, with Phase 2 being a bit larger and more complicated (in maize as in real life). Truth be told, even Phase 1 was too complicated for us — between bouts of stargazing (the night sky is a definite upside to an unlit rural corn maze) and laughter at the various groups confusing each other with calls of “Marco and “Polo,” we made it to what we later determined to be the inside of the globe. We weren’t able to find where the path continued, however, and had to backtrack from there. Some attendees appeared to have maps, but we must have missed that distribution station (besides, that’s kind of cheating, right?!). 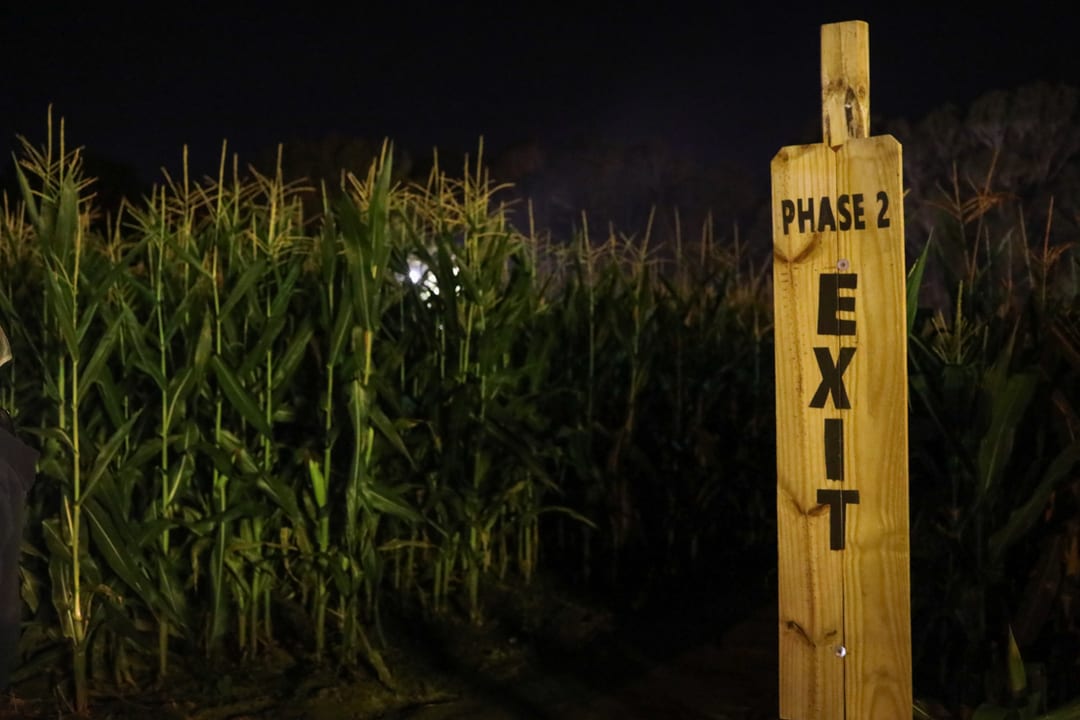 Afterward, we munched on kettle corn and took a lap to scope out the rest of the activities — a playground with a pirate ship and slides, centers for photo ops like stocks labeled “rule breakers,” and a few of those silly murals with the faces cut out, the cow train running its course around the lot every 15 minutes or so. All in all, it was a down-home, country-style good time and I would have been interested to see what the maze was like in its haunted version, or even during the daytime when it would have been less disorienting.

It’s worth the jaunt, just be sure to mask up!