The wingspan is remote controlled and is over 13-feet long

“Pretty, pretty!” Those are the words uttered every Mardi Gras and Super Sunday as the Black Masking Indians pass, each suit a glorious story sewn together over the course of a year by its wearer.

People always make way for the Indians, but when the Black Mohawks Gang Flag Stephen Hall parted the crowd, it wasn’t only out of respect or choice that the people moved. Hall’s suit included remote-controlled wings, taking up 13 feet and 4 inches when fully extended.

The New Orleans native, who now lives in Dallas, talked to us about the process that went into the ‘Ghost Suit.’

How long have you been masking?
“This is my third year making my own suit. Before that, I did chanting with the gang.”

How long did it take you to make the suit?
“I would say a good 10, close to 11 months. I started a little early. I finished my suit from last year before Mardi Gras Day. So once I got everything together, I started early.” 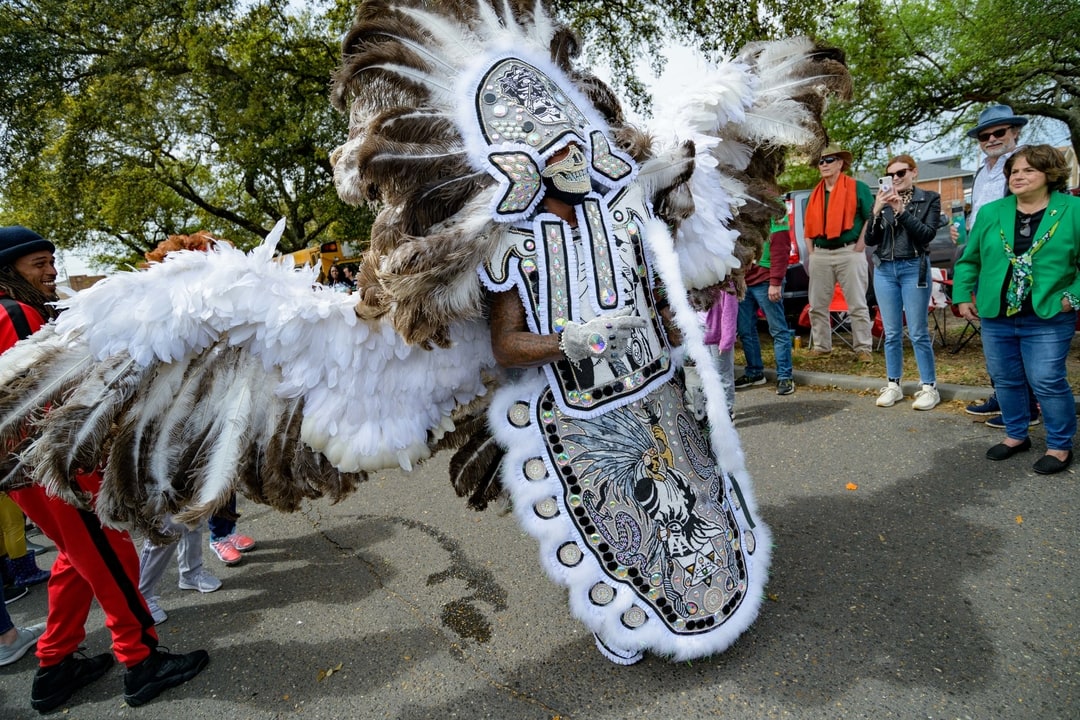 What was the most difficult part?
“The most difficult part was the wings because they are articulating wings. So there’s a remote control unit, there are activators used to raise and lower the wings. Putting the goose feathers on those wings was kind of hard to get done. A side of my suit, especially the pants and the jacket, the material is a metal mesh, and there are really tiny stones in the mesh. So instead of covering it in satin, the entire thing was a metal mesh. To get it to kind of conform to the way fabric would do, if you’re covering canvas with fabric, it’s fairly easy because it’s the same consistency. But, it’s really hard to get metal to work the way it’s supposed to. That was the hardest thing to deal with.”

How did it become the ‘Ghost Suit’?
“When I came into the gang, Big Chief Sugar Bear — now his son is the big chief — we were talking about names and influences and things of that nature. My grandfather’s nickname was “Ghost” and it’s kind of weird because they call both of my uncles “Ghost”. So the next generation, that’s kind of what they would call us too. “Oh you’re Lil’ Ghost.”. Back in college when I would play basketball, that was a name that stuck, and I don’t even know where that came from. So things kind of come together the way they need to, the universe works everything out.”

What’s the story behind the suit?
“On this particular suit, it’s about my thoughts of the great spirits or the father spirits, your ancestors, and how they influence you. Whether they influence you in a peaceful way, or they influence you to go to war. The inspiration was the great spirits from Native American Indian faiths, Obatala, which is a Yoruba faith, and Dambalallah, which is a Voodoo influence, all of those are the father spirits of those particular faiths. I felt like I was channeling something from those spirits and that was the story I wanted to tell. That you understand that those spirits think, they’re influencing you today. Those decisions that they made and dreams that they had are influencing you today. Whether you can fly or whether you’re on the ground, it comes from that.

If you notice on my crown, the patch that’s beaded on my crown is of life and death. It’s a skull for death, but it’s also a butterfly for life. That tells a dual story because technically you’re a skeleton, you’re a spirit that’s at the base of everything of life for you. A butterfly only becomes a butterfly after a symbolic death, where it becomes a cocoon and it’s reborn. So it symbolizes both. So that I wanted to have, Ghost is always a nickname, that’s my tribal name, the skeleton always kinds of brings that forth.”

You’re going to be masking on the first day of Jazz Fest. How does that feel?
“It’s an honor just being with the gang period, I have a cousin, Kevin Harris, he plays saxophone with the Dirty Dozen. I played trombone for years and I’ve played in a brass band out here in Dallas as well. So its something that brings home the connection of the music and the spirit of New Orleans. And pretty much everybody, because everybody comes down here. It’s going to be a big thing for me. This is the first year I get to do it, I was supposed to be with them for the last two years and something always came up. So, knock on wood, God willing, I’m going to be there and I’m really excited about it.”

Have you started on your suit for next year?
“Yes. My apron is halfway done, there’s just some stuff to add to it, and I can’t really do that until I build out the rest of my suit.”

What’s it like when you finally get to put your suit on?
“When I first started, I would hear Indians say it transforms you, you become somebody else, you have another spirit come over you and it kind of controls how you feel and what you do. And I was like, ‘Yeah alright, you’re trying to make it more mystical than what it is.’ But it’s like you go to a different place. You feel what you put into it. I felt every bead. I really felt a connection to what I wanted to tell with this story, to my roots. It is definitely like you are someone else. The good thing is it’s somebody you know because it came out of you. It’s different, but it’s familiar. You definitely feel powerful, you feel accomplished. I was never a very patient person. People always ask me, ‘Well how do you do this?’ I think I get everything done because I’m not a patient person, but the funny thing is I’m learning patience while I’m sewing, because of there are no shortcuts. I don’t know anybody that knows them, and I don’t know if they would tell you if they did, but there are no shortcuts. You have to sit and sew, and you have to put the hours in, or it will never be what you want it to be.”

This suit with the remote-controlled wings, it feels like an evolution in the masking culture.
“I actually sat and thought, ‘What am I going to do that nobody has done before?’ Everybody looks into that same bag of inspiration, I think I had it good because I’m connected to home, but I’m here in Dallas. I’m connected, but I’m here, kind of isolated. I’m still in a position where I can call my chief and the inspirations from me. I call several people that will give me guidance and help when I need it. To me, the whole thing about our culture has always been, ‘How are you going to stand out?’ For lack of a better word, stuntin’. We’ve always been about ostentatious, over-the-top gold, beading, jewelry. Everything has to be better. That’s something that has been in us since before Egypt. We come from that. So my thing was to try to be new and still be a representative of the culture. To do it in a true way, but to say ‘OK, how am I going to be different but still fit?’ If we don’t have that, we will always be the same thing. In the end, there’s such artistry that’s put into everything that it’s still going to be amazing, but if you have everybody that draws the same, sews the same, designs the same, does a suit the same, it loses some of what the luster is about. That was the whole point of making a new suit in the first place. So you would be different next year. It has to evolve, and if you don’t evolve you’re not going to have the younger generation. It’s great to see the younger kids embracing it. If you don’t evolve, you stay stagnant and you die. 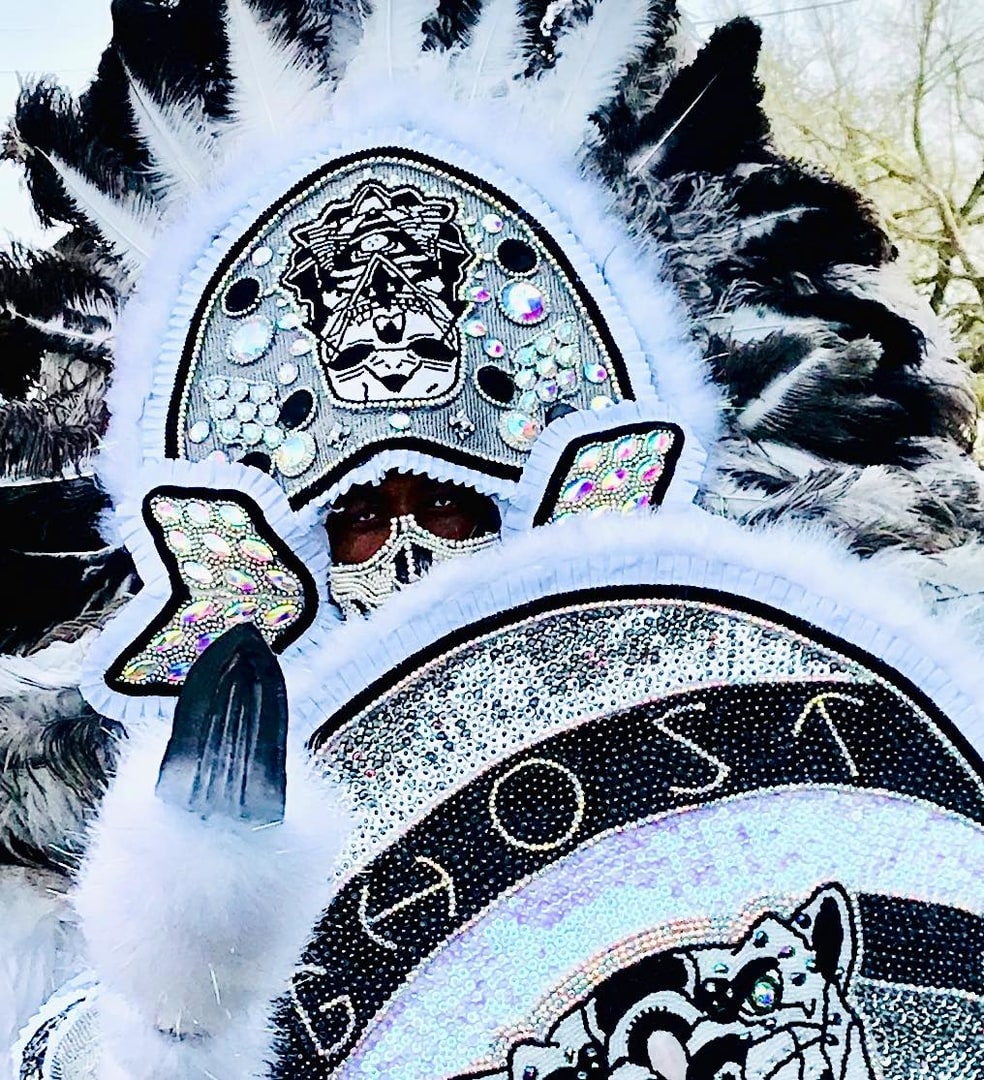 I was talking to a friend last night. He has no idea any of the history behind it, but he’s into a lot of black studies, and he said it’s amazing that all of these things in our culture are in our history, but New Orleans seems to be the only place where it remained and it stayed true to what we were doing. That hit me really hard because I never thought about it like that. Where else can you go that our people are so connected to what we were and are still evolving today? I intentionally wanted to do that. I said, ‘Hey, has anybody ever done this before?’ And my mentor said no. At the end of the day, I like to say I’m a kindergartner when it comes to my beadwork and everything. I see such amazing pieces of art that people do. I’m trying to get there 10, 15 years down the line to make sure I can do it to the point where I see it in my head. I still have so much to learn. It’s a daunting task to look at what I have to learn. So how do I fit in with the people I look up to as being exciting and amazing example of what we have in this culture? I wanted to be different.”

Are you going to Downtown Super Sunday?
“I plan to. That’s the plan right now, that was something I missed out on last year, as well.”

Anything else you want to add about the “Ghost Suit”?
“I worried so much about this suit. One of my mentors, I kept talking to him saying, ‘What do you think? What can I add? I don’t feel like it’s done.’ And he would say, ‘It ain’t done until you put it on.’ I really thought people were not going to like it. I didn’t care if people said, ‘He’s not the prettiest.’ I just didn’t want people to look at me and say, ‘Whoa, what is he doing?’ I really just didn’t know how it was going to work, and it worked. If you put the work in, you’ll get out what you put into it, and I put a lot into it. There are still people that I look at when I’m on the street meeting people, and I think, ‘I want to look at it and see what he did,’ because you know what goes into it. When you understand what somebody went through to put that together, for anybody to appreciate that, it means a lot to me.”

MORE: Every Mardi Gras Indians’ suit has a story, hers is a love song to strong women