Ask just about anyone what they love about New Orleans and two things tend to jump to the top of the list: the food and the music. But as “The Simpsons” demonstrated so aptly in that montage that went viral a few years ago, it’s not necessarily known so well for its meat-free options (cliff notes for the uninitiated: Homer feasts relentlessly upon the most famous dishes from the most noteworthy restaurants in the Crescent City, while poor Lisa, who memorably went vegetarian in Season Seven, looks on in a combination of judgement and astonishment).

That said, there are actually plenty of plant-based options available to satisfy even the strictest of diets if you know where to look. Here’s our neighborhood by neighborhood guide to the best vegan food in town.

Frequenters of the CBD should rejoice because not one but TWO of New Orleans’ top restaurants with vegan offerings have opened new locations in the business district just this year. 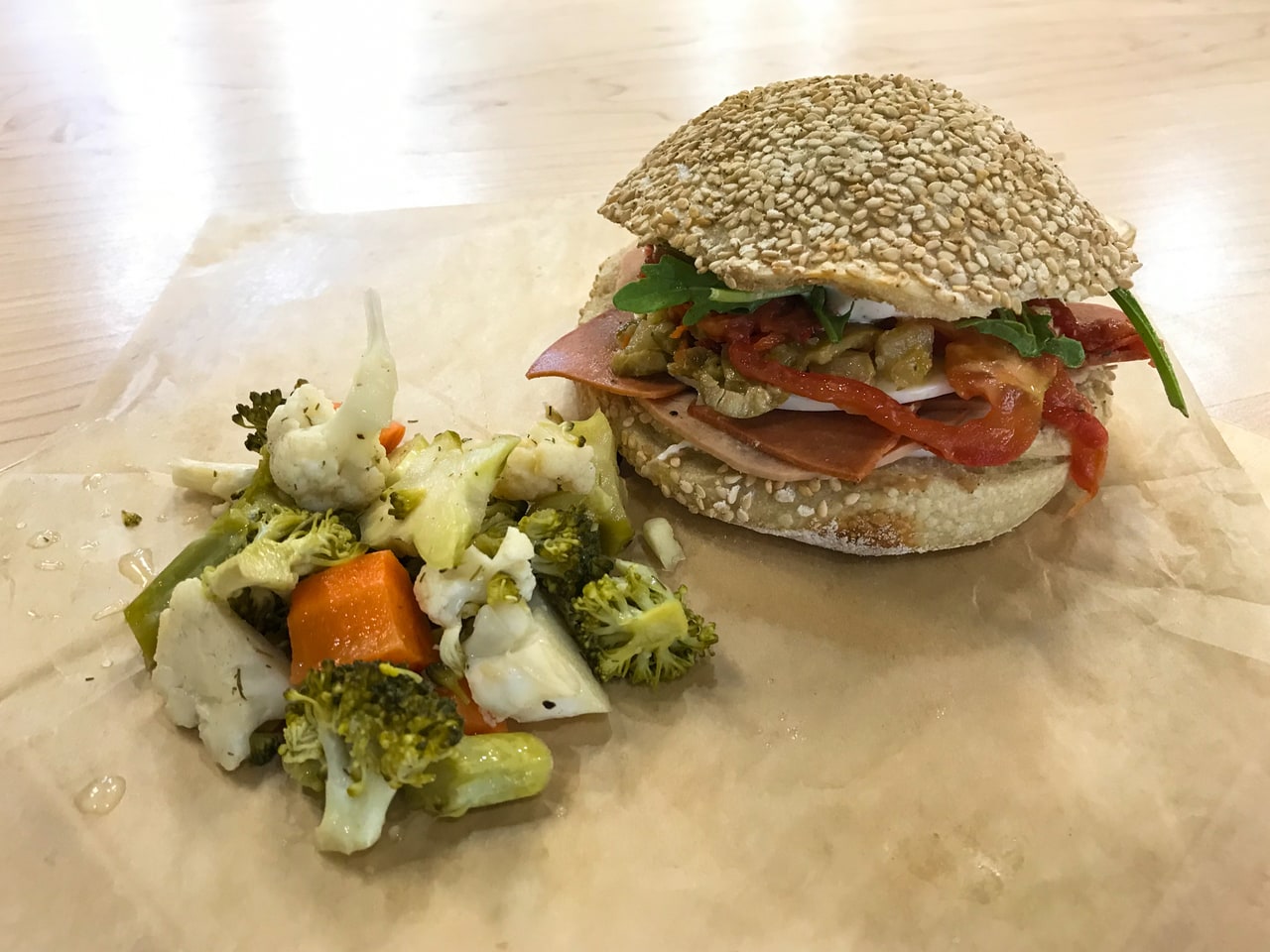 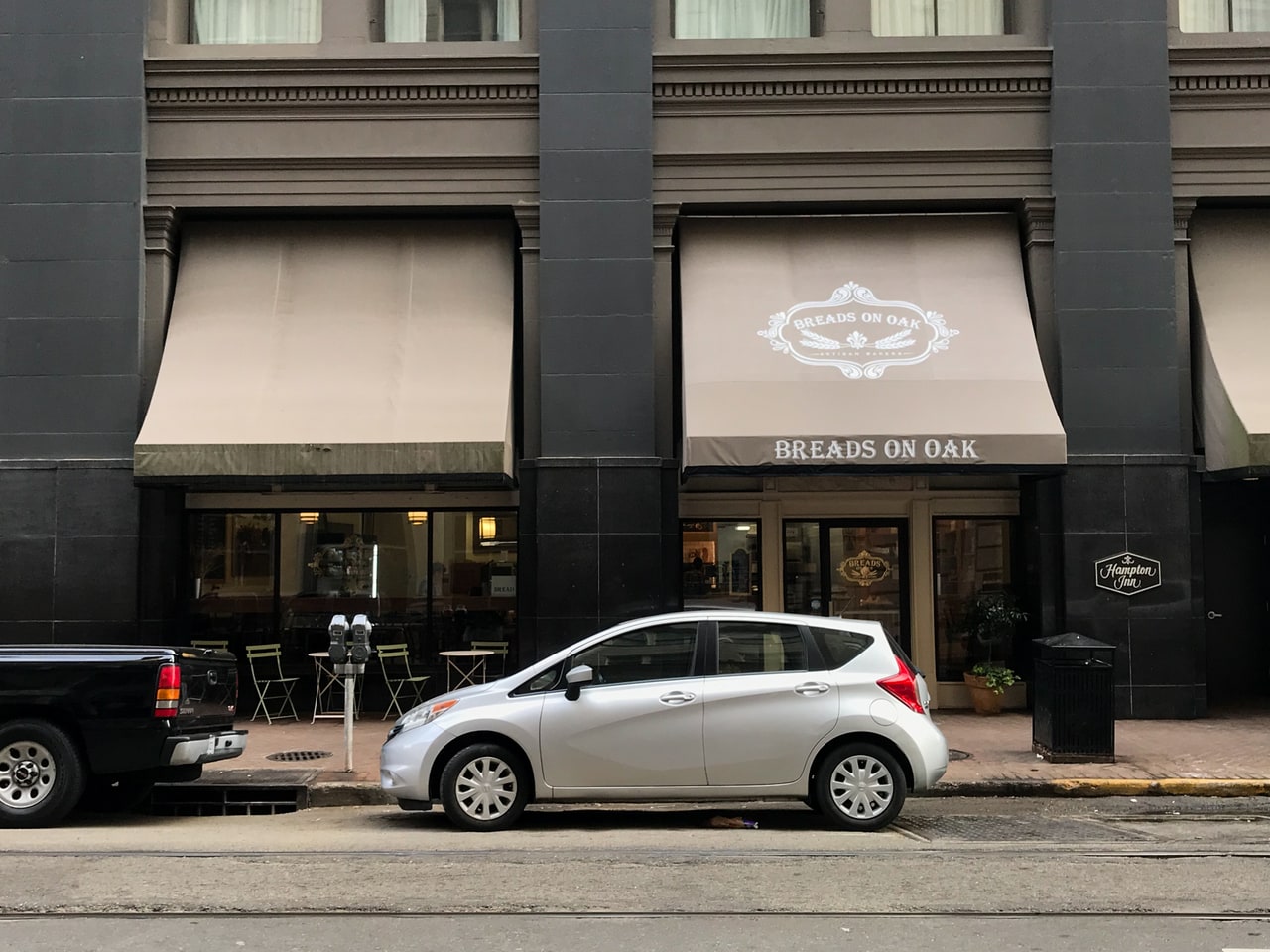 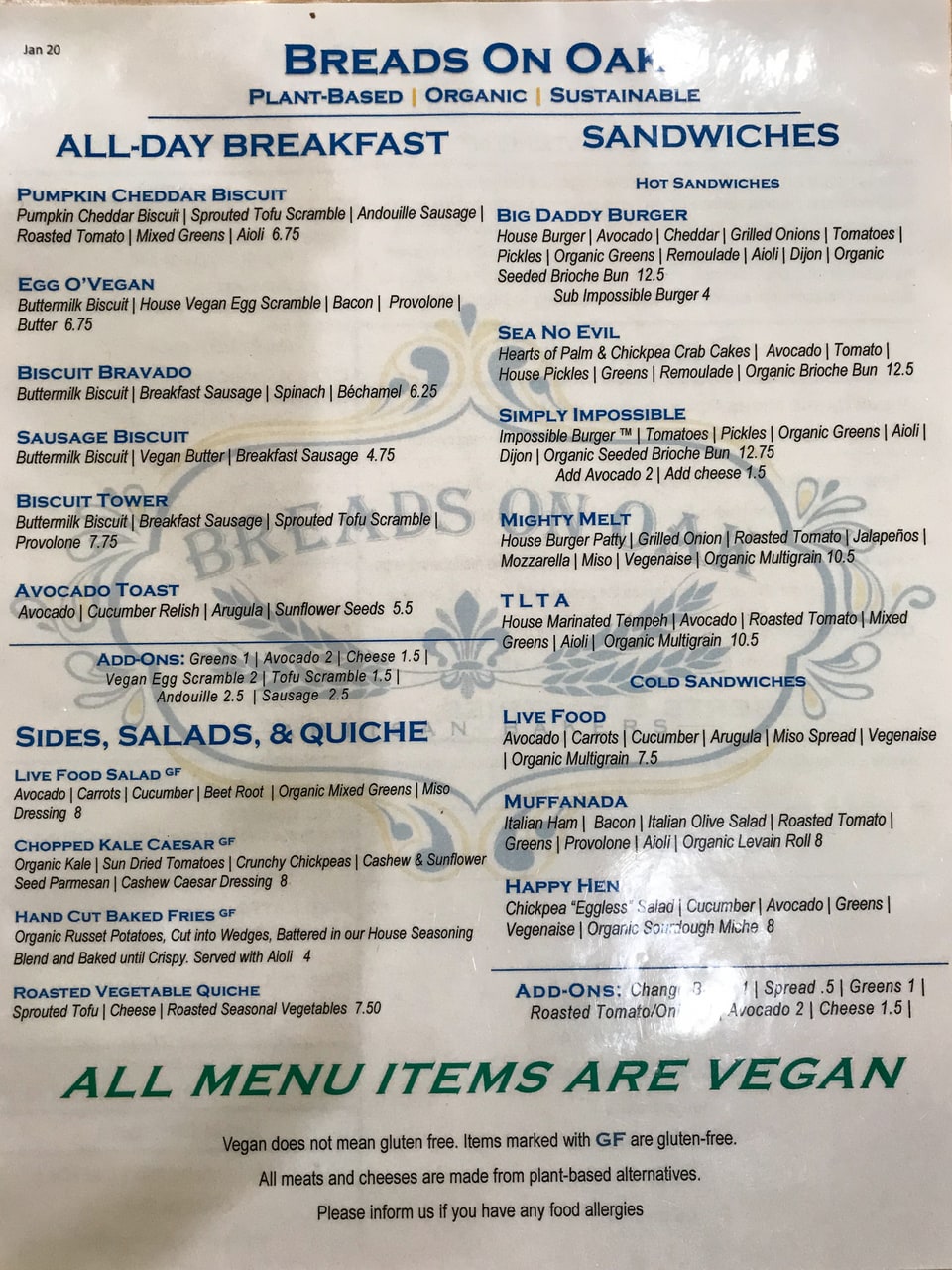 Breads on Oak (its original location, as you might guess, is on Oak Street Uptown) now might as well be Breads on Carondelet! With a wide variety of delectable baked goods and some VERY convincing mock meats, it’s hard to believe their entire menu is vegan. We recommend their take on the classic New Orleans muffuletta sandwich (which they’ve cleverly branded the muffaNADA) with its plant-based deli “meats” and drool-worthy giardiniera. They also make a mean vegan king cake when the season is right. 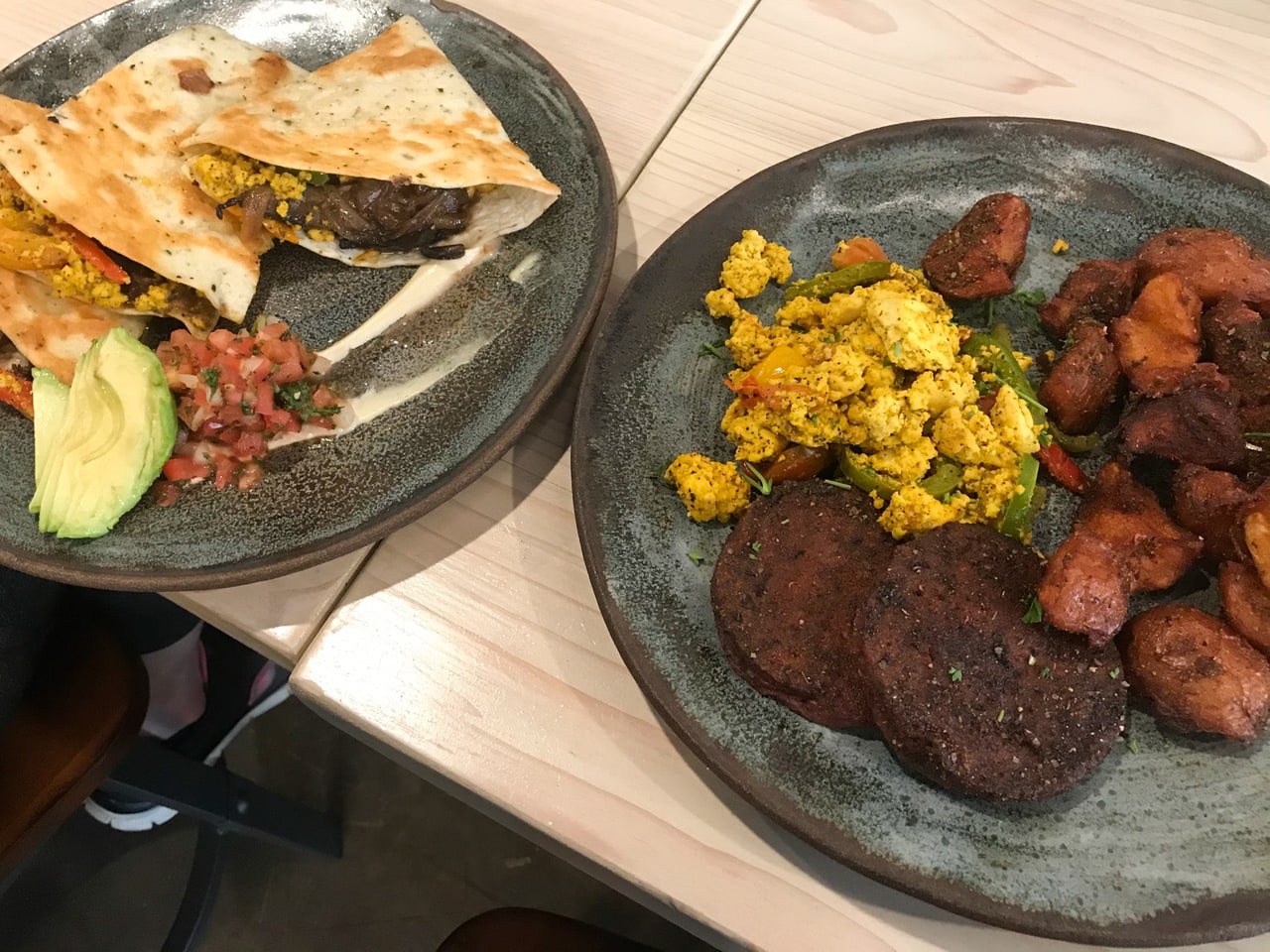 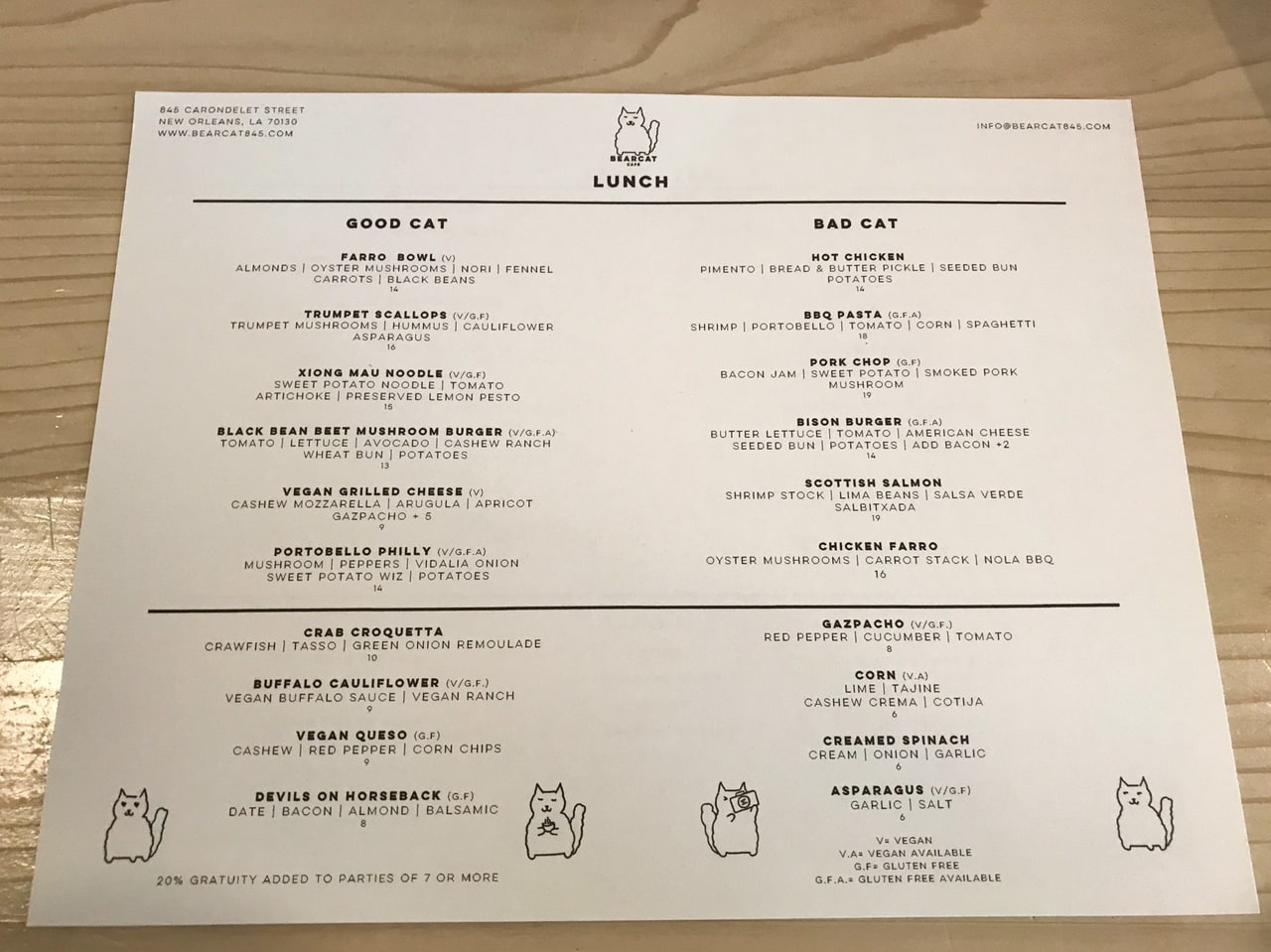 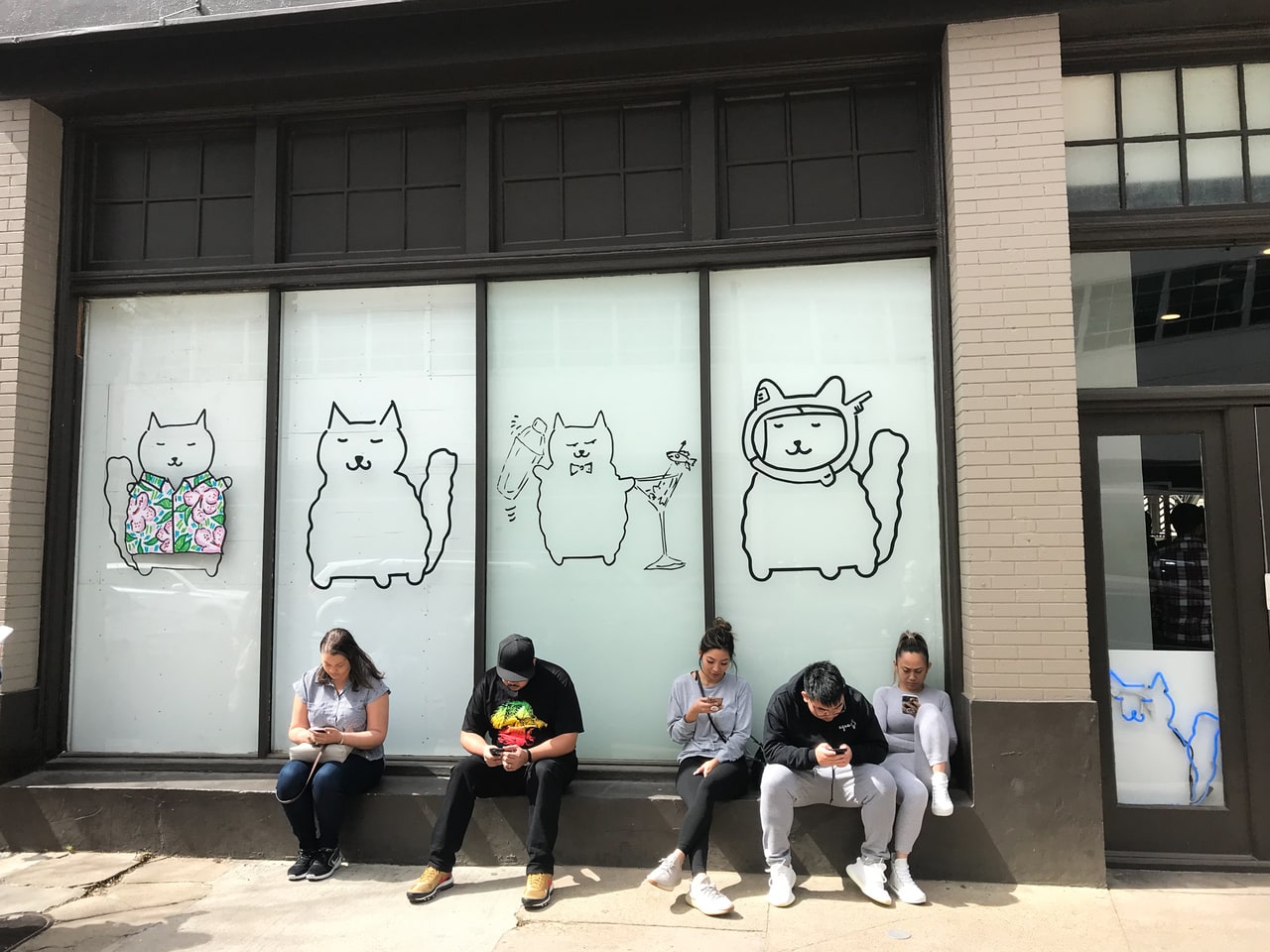 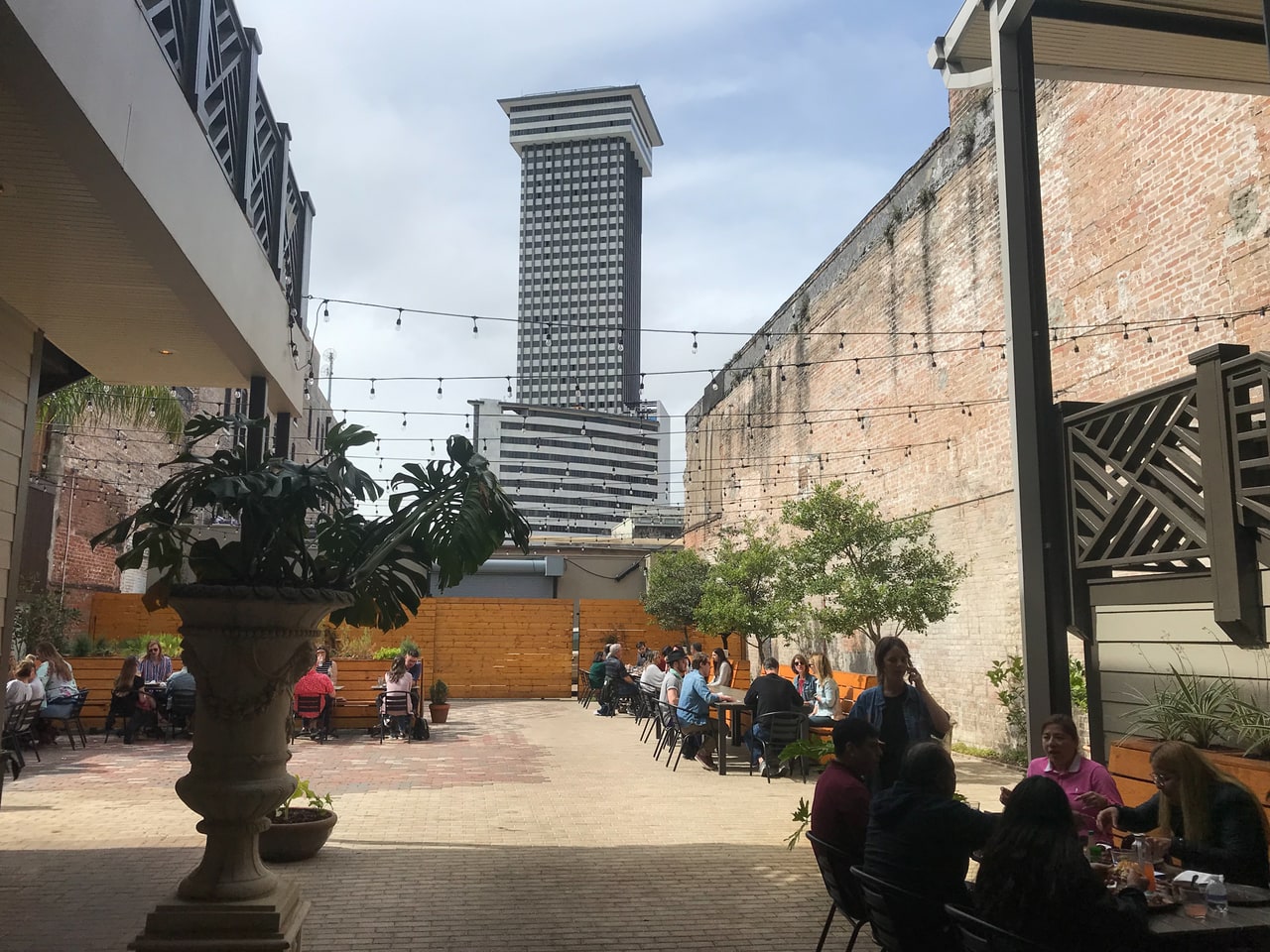 Bearcat Café (original location on Jena Street) also has a beautiful new space on Carondelet Street, just off Lee Circle, complete with a massive courtyard. Even with this impressive capacity there tends to be a line out the door, but we promise it’s worth the wait. The menu is divided first between breakfast and lunch items, and then further into “Good Cat” and “Bad Cat” sections to identify the healthy versus the, shall we say, indulgent. Vegan selections tend to fall under “Good Cat,” but rest assured: they’re plenty indulgent as well. The namesake Vegan Bearcat Breakfast — a hearty plateful of tofu scramble, house-made black bean ‘sausage’ patties, and crispy potatoes — gets our endorsement. Want to read more about their brunch? Click here. 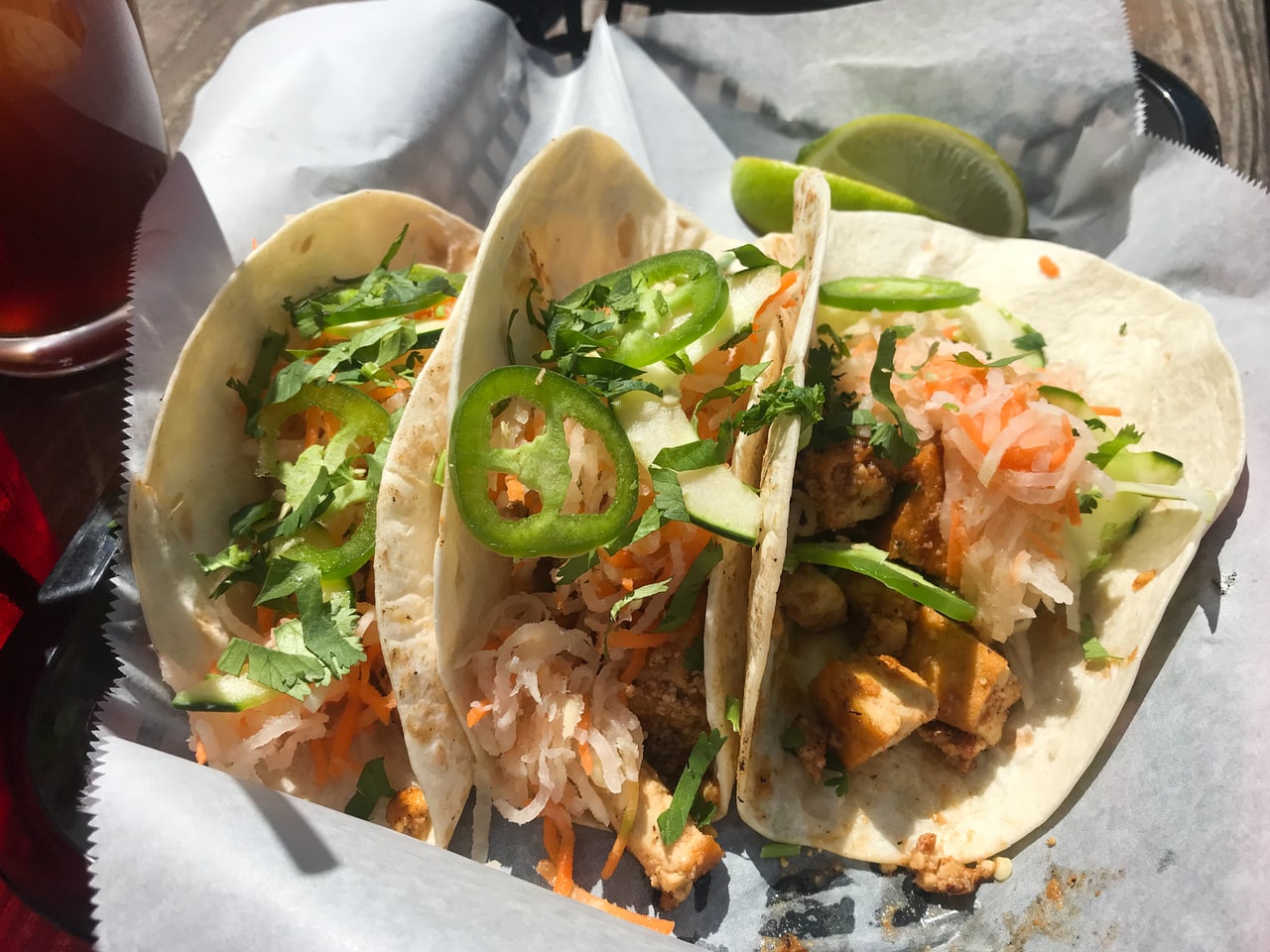 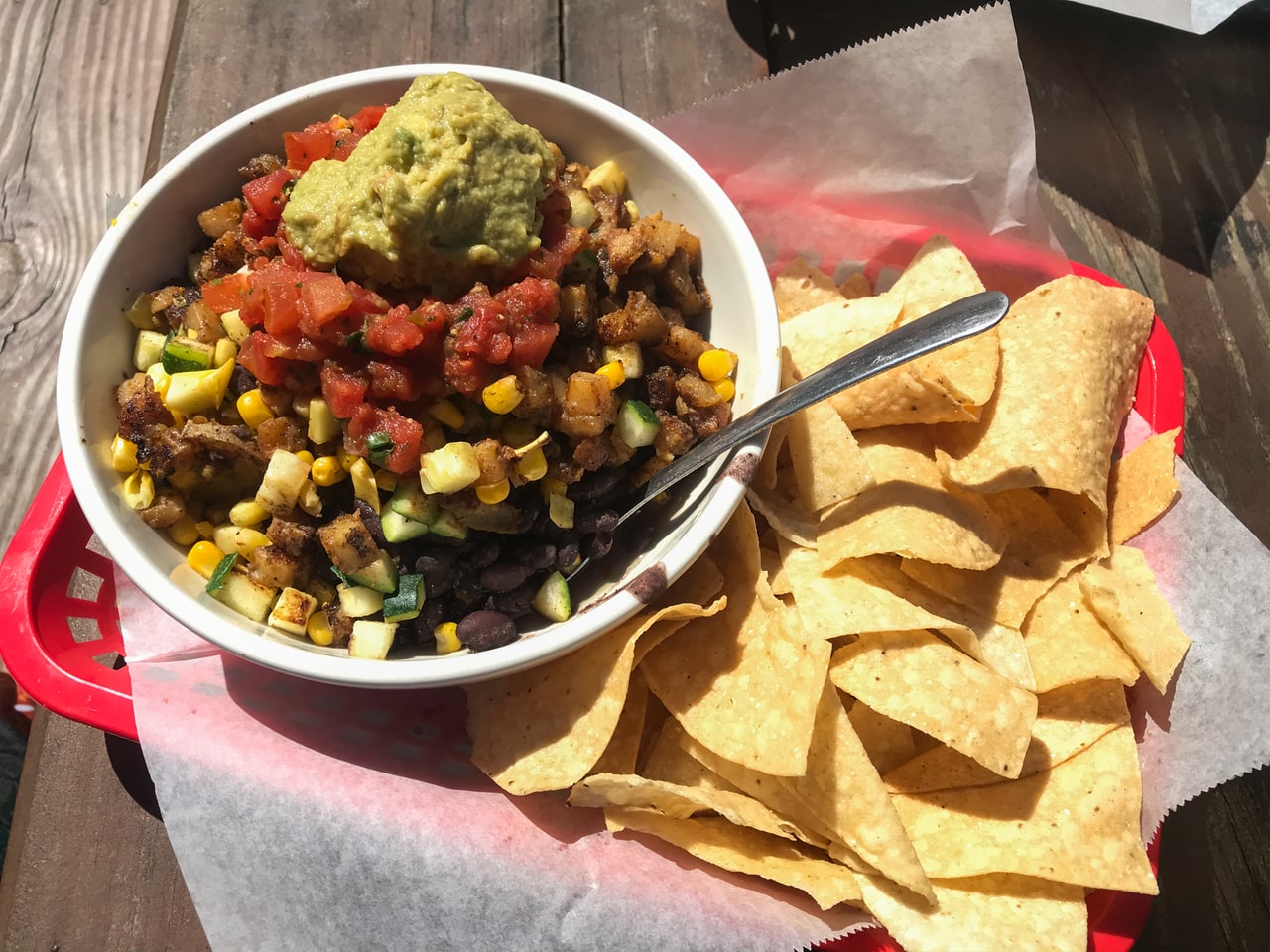 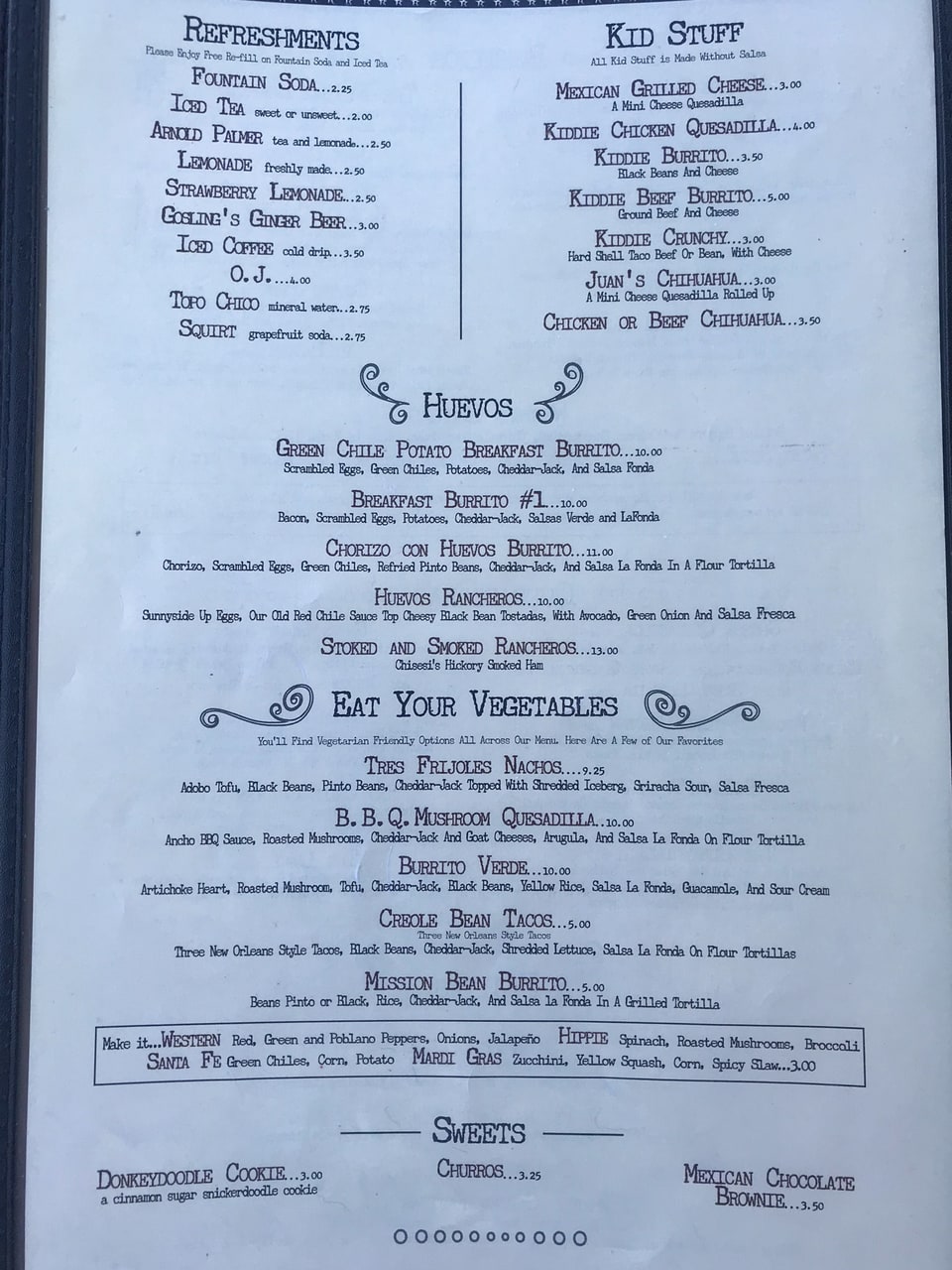 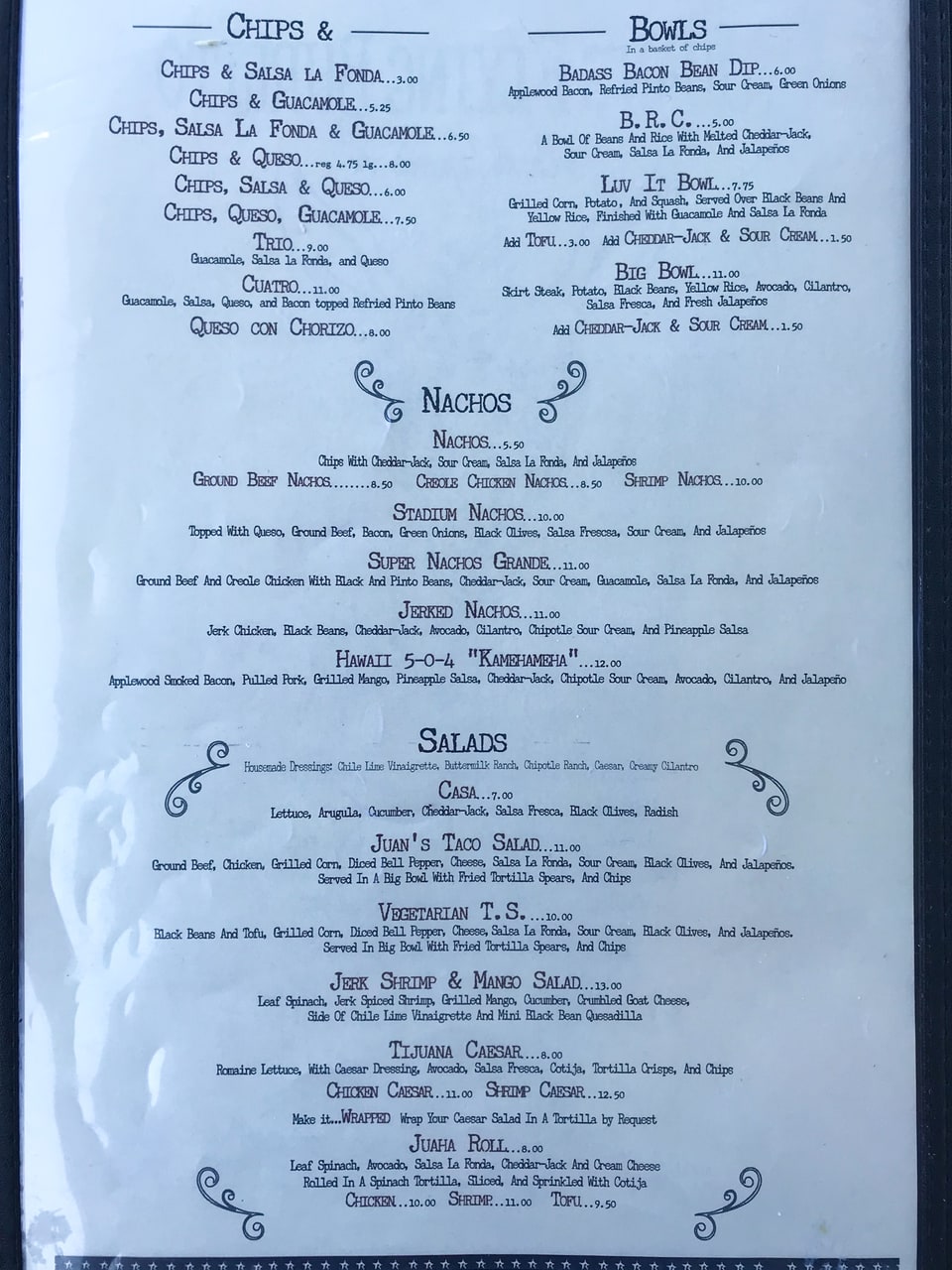 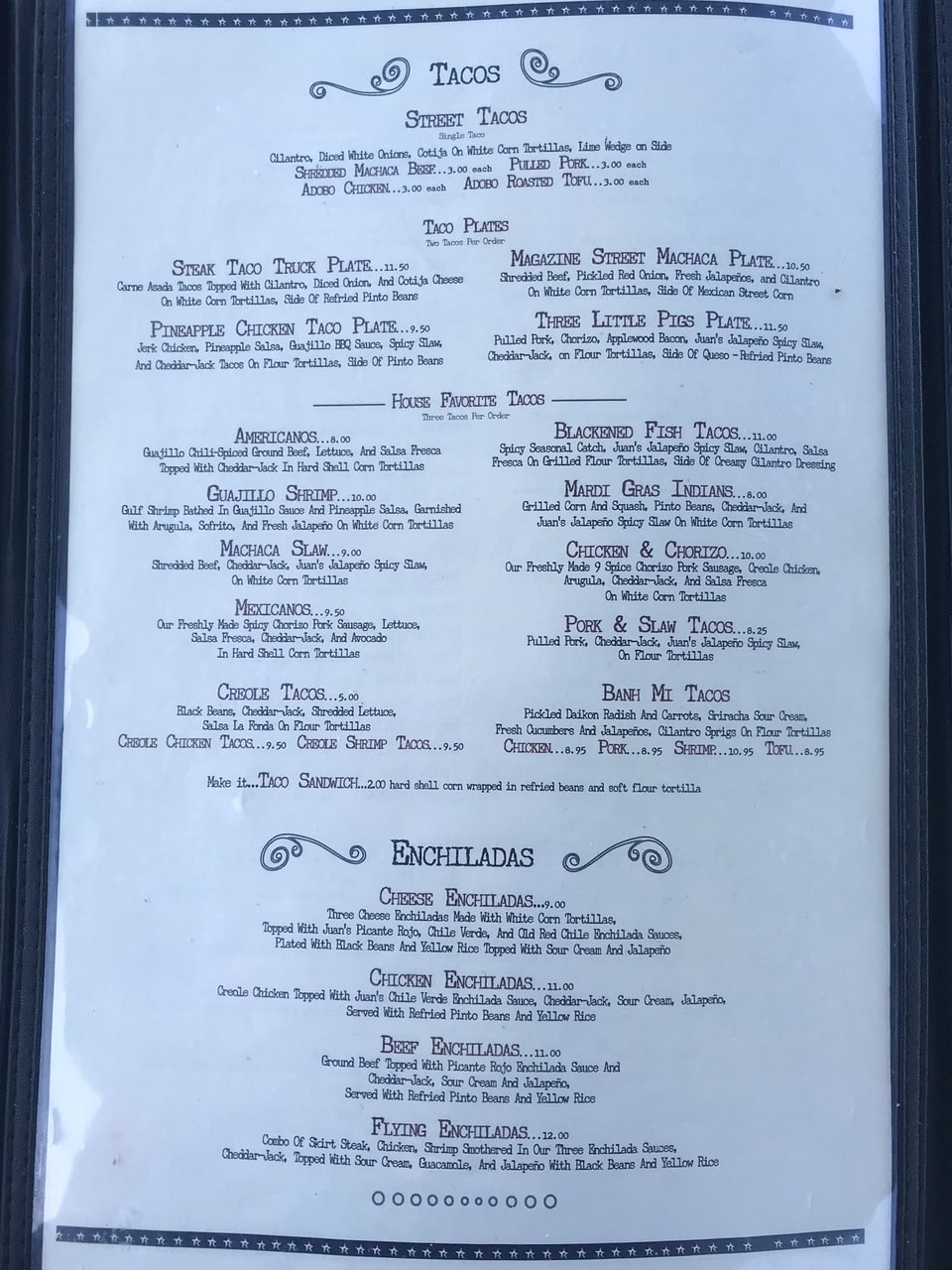 Juan’s Flying Burrito is another local hot spot with multiple locations, including one on Baronne in the CBD. An “Eat Your Veggies” section at the back of the menu highlights some of the choice meat-free options available. We certainly do love the Luv It Bowl, which is vegan without any modifications: an enormous bowl of grilled corn, potato, and squash over black beans and yellow rice, served with guac and salsa (and a generous portion of tortilla chips). At only $7.75, and with almost guaranteed leftovers, it’s a deal that can’t be beat! First runner-up are the tofu banh mi tacos (made vegan by requesting no dairy).

Killer Poboys
Po’boys are a quintessential element of New Orleans cuisine that are usually off-limits for non-meat-eaters, but Killer Poboys doesn’t play by ordinary rules. Their innovative sandwich menu includes two formidable vegan options: a sweet potato and collard poboy, and a roasted cauliflower sandwich (that can be ordered as a poboy if you prefer). If their store on Dauphine Street is a little crowded fear not: Their original location is sneakily nestled in the back of Erin Rose bar, just a stone’s throw away on Conti Street. 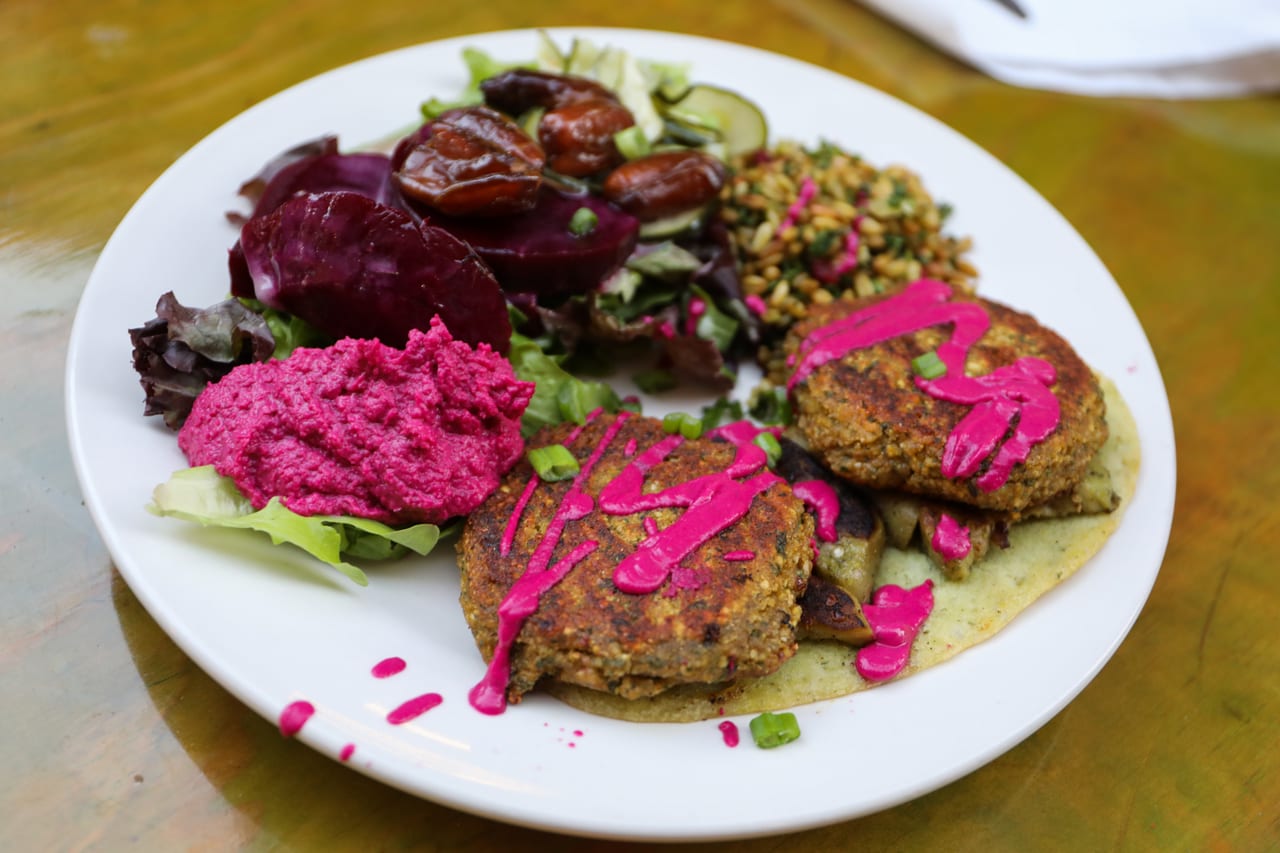 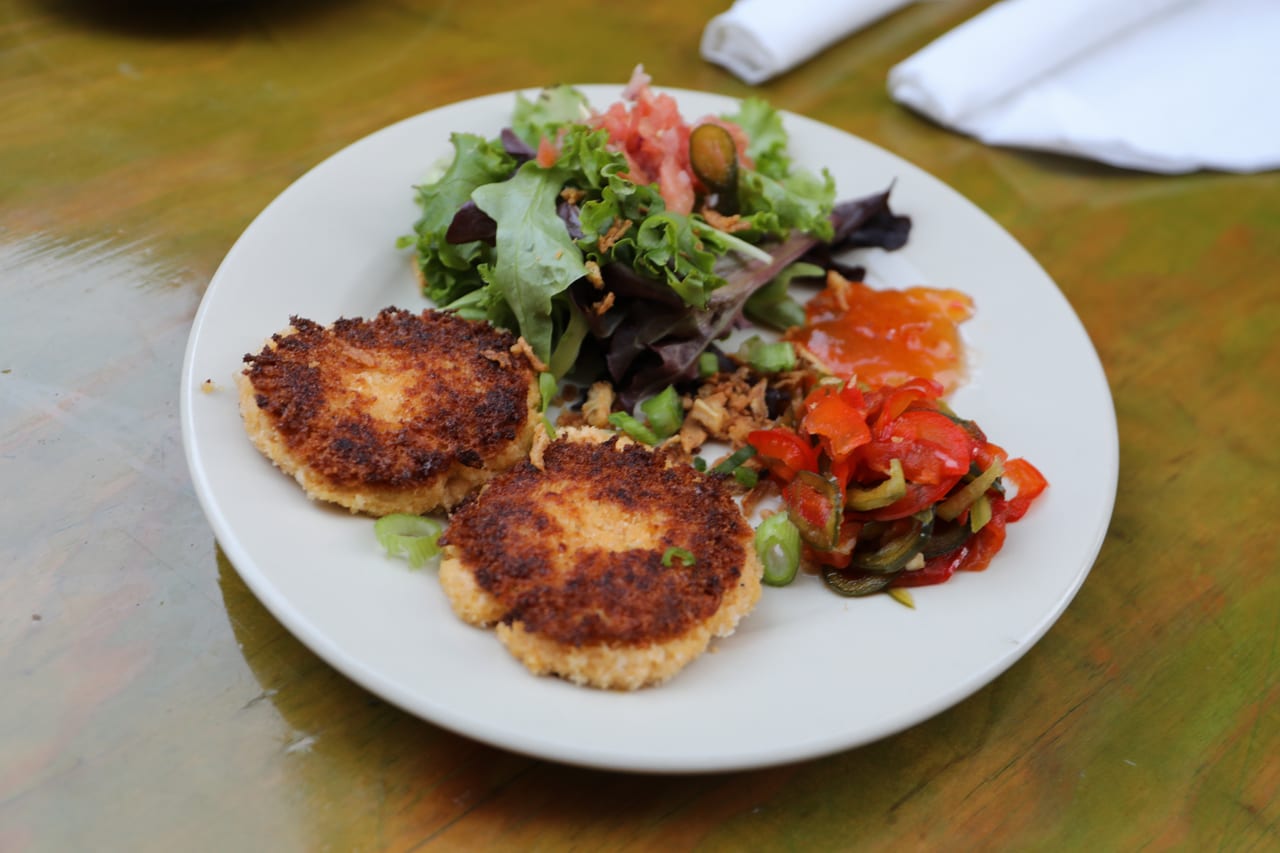 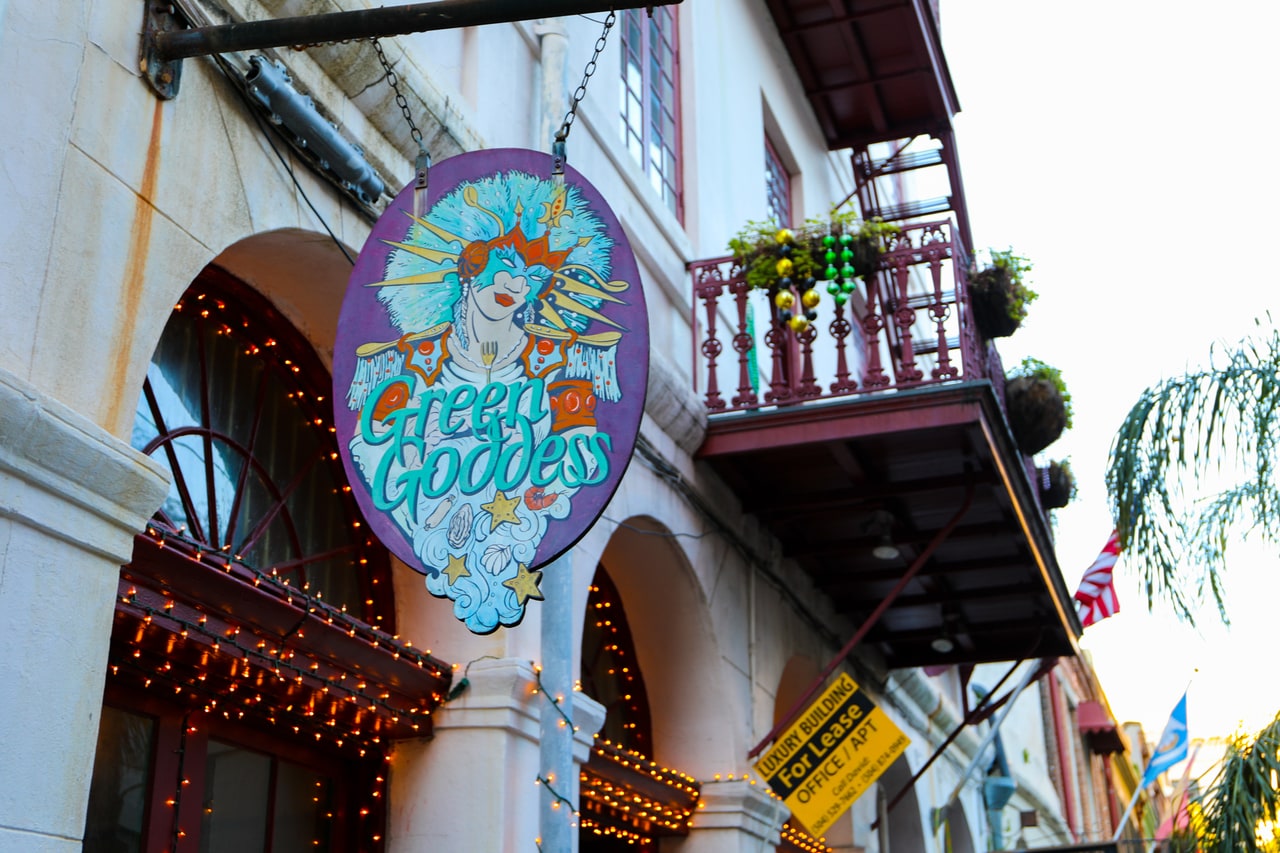 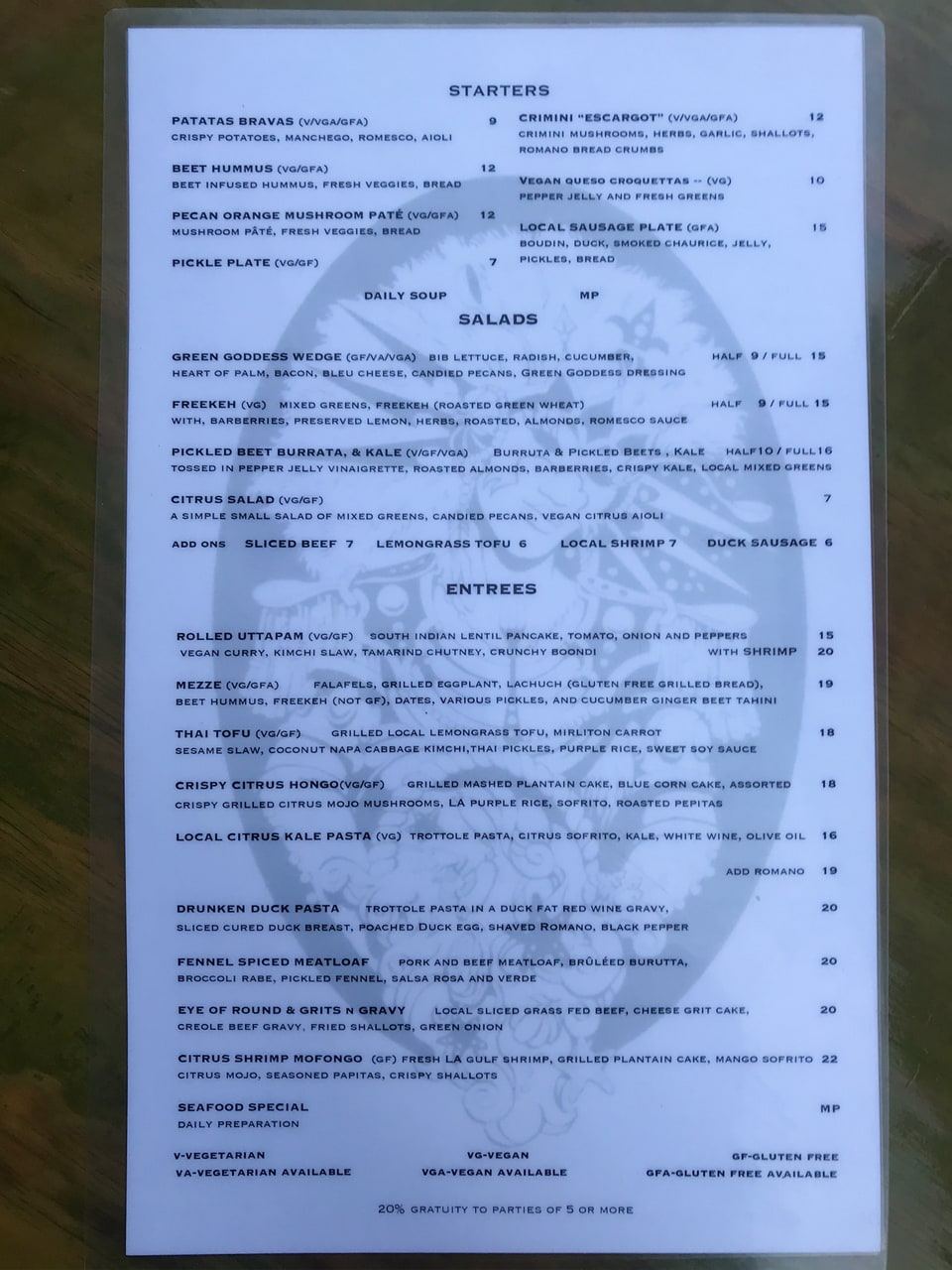 Green Goddess
If you’re marching along Conti or Bienville Streets at too brisk a pace you might well miss Exchange Place, the darling alley that runs parallel between Royal and Chartres. But if you’re being mindful of your surroundings, you could just as easily be lured into the alley by the enticing aromas coming from Green Goddess. Stop in and grab a table on the charming flagstone thoroughfare, and treat yourself to one (or more!) of the various vegan options. We liked the delicately fried vegan cheese croquettas and the mezze platter, complete with falafel, beet hummus, roasted eggplant, and other Mediterranean-inspired snackables that are great for sharing.

Trilly Cheesesteaks
There’s a bright pink building on Banks Street you should DEFINITELY know about if you’re in the market for vegan cheesesteaks. Offering both chicken and steak seitan options in varieties such as original, Far East, buffalo, and BBQ, it’s hard to go wrong at Trilly. They also have a great selection of vegan sides, such as cauliflower wings, poutine, or their signature pickle fries with vegan ranch. Conveniently, they’ve got a window in adjacent Banks Street Bar, so you can get your munch on while enjoying some local entertainment or a tasty adult beverage.

Sweet Soulfood
Down-home Southern cooking is another type of cuisine that’s hard to imagine without vast quantities of ham and butter, but Sweet Soulfood is here to prove that that it’s not only possible, but delicious even with those omissions. Closed on Sundays, they offer a rotating six-day menu the rest of the week with favorites such as red beans on Mondays (of course!), mushroom steak n’gravy on Tuesdays, barbecue cauliflower on Wednesdays, stuffed bell peppers on Thursdays, a veggie boil on Fridays, and chickpea cakes on Saturdays, with a satisfying array of sides and desserts available every day. Ask about their catering options as well!

Sneaky Pickle
This Bywater mainstay suffered a tragic fire in March 2019 but fear not — thanks to their resilience and steadfast support from their community, they were able to reopen in the same Saint Claude location nine months later. They tweak their menu seasonally, but certain favorites like the tempeh reuben and mac n’cheese with cashew chorizo are available year-round.

Red’s Chinese
It can be easy to miss Red’s Chinese on Saint Claude — it’s a nondescript storefront with only a big glowing red square as a sign out front — but don’t miss out! In addition to super hip decor, a cute patio, and delicious cocktails, it also boasts a great selection of vegan items on its designed-to-be-shared menu. We love the smashed cucumbers as a small plate and the General’s Tofu as a large plate.

Small Mart
Small Mart recently moved from a tiny closet of a French Quarter location to a fresh Marigny space with slightly more square footage (may we suggest the rebrand “Not-Quite-As-Small Mart”?). They’re fully pescatarian (mostly vegetarian, with some fish options as part of the morning bagel spread) and have a full vegan menu with an emphasis on curries from noon through dinner.

Dat Dog
The prominent blue, balconied building at the corner of Royal and Frenchmen is more than just an eye-catching backdrop from Drake’s “In My Feelings” video: It’s a delicious hot dog spot with a surprising number of vegan options. There’s a spicy chipotle dog, a vegan Italian dog, a smoked apple sage dog, and a vegan bratwurst you can dress up yourself or swap out in any of their House Special creations. The Dr. Bob and “Star Wars”-inspired decor earn it major brownie points.

Seed
As Seed’s website states, they’re “moving vegetables to the center of the plate.” With innovative veggie creations such as masa gnocchi (made from oat mole, grilled corn, and butternut squash), a smoked mushroom gumbo, and a kelp po’boy, it’s hard to choose a favorite.

Tal’s Hummus
Most Middle Eastern restaurants have their fare share of vegan items, but Tal’s has something they don’t: vegan shawarma, a great chicken alternative made from seitan. Served with Tal’s housemade hummus on their mouth-watering pita bread, it’s the kind of dish that makes you feel like you can really have it all while still making humane and environmentally conscientious dietary choices.