One need only take a walk through the French Quarter on a muggy summer day and look around and the sights, smells and sounds of the city to realize that the veil between New Orleans and the Caribbean is very thin. Not only do we share a climate, but the food of New Orleans has been greatly influenced by Haiti, Cuba, Jamaica, Trinidad and Tobago, the Dominican Republic and other beautiful islands. New Orleans’ favorite dishes such as gumbo, red beans and rice, jambalaya, and étouffée can trace their roots back to French, Spanish and yes, Caribbean influences. That’s why it’s no surprise that the New Orleans restaurant scene has seen an influx of true Caribbean restaurants owned and operated by first and second-generation Caribbean people in recent years.

One of these restaurants is Island Paradise, an unassuming restaurant located at 635 Kepler St. in Gretna. The restaurant is small, but the menu is packed with food from the island of Trinidad and Tobago.

The restaurant also offers a selection of food from Haiti and Jamaica from owner Nadine Balbosa, who runs the restaurant from the front door to the kitchen.

The menu has a mouth-watering selection of exactly the type of food you would hope to enjoy here: stewed oxtails, stewed chicken, jerk chicken, curried goat, traditional Trini doubles, plantains, and roti, and that’s only scratching the surface.

Although I have had Caribbean food before, I’ll admit that I’m not as “schooled” in it as I am other cuisines. I went into Island Paradise with an open mind and excited to try a few things that I hadn’t had before and sample some old familiar favorites.

For my lunch, I knew immediately that I wanted to start with Traditional Trini Doubles- which is made with two pieces of flat fried dough filled with curried chickpeas, peppers and chutneys. This is one of the foods I had never had before, so I was going in blind. 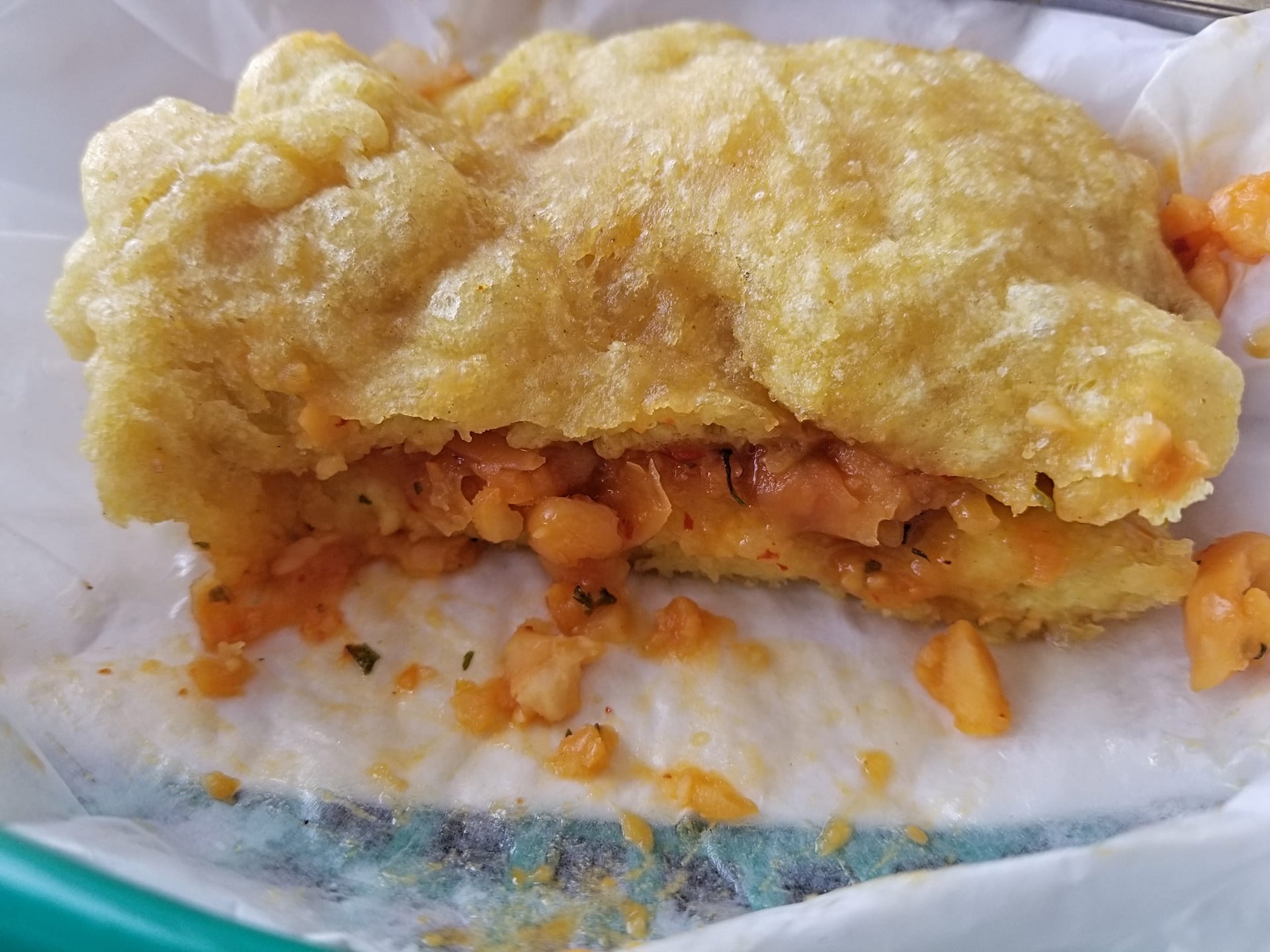 I also ordered the Paradise jerk chicken with a side of Dhalpouri roti and I also indulged in some cornbread and sweet plantains.

All of the food here is made to order, but my patience definitely paid off when an incredible spread of food was laid out in front of me. The first thing that I tried was the Trini Doubles and it was fantastic! I loved that the baras (fried dough) was nice and light and the filling was tasty with a lot of flavor. In this version, you can get it with or without peppers. I got it with peppers and I found it to be the perfect combination of savory and spicy. It was my first experience, and I liked it so much that I am already planning to order it again on my next visit. 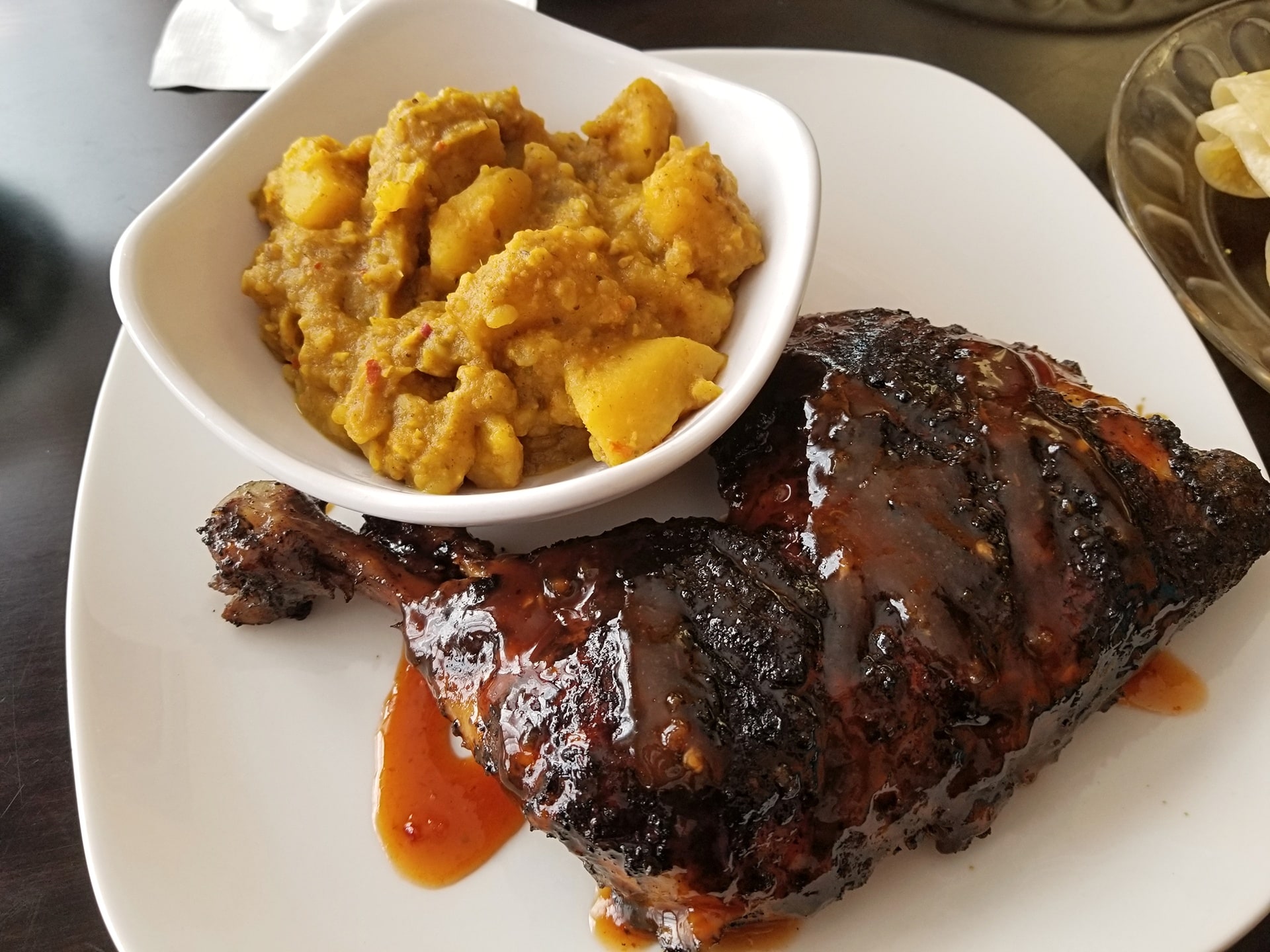 Next, I dug into the jerk chicken and Dhalpouri roti. I love jerk chicken and the version here didn’t disappoint. Island Paradise serves up a large piece of juicy and flavorful chicken topped with a sauce that was sweet and complimented the dish well. 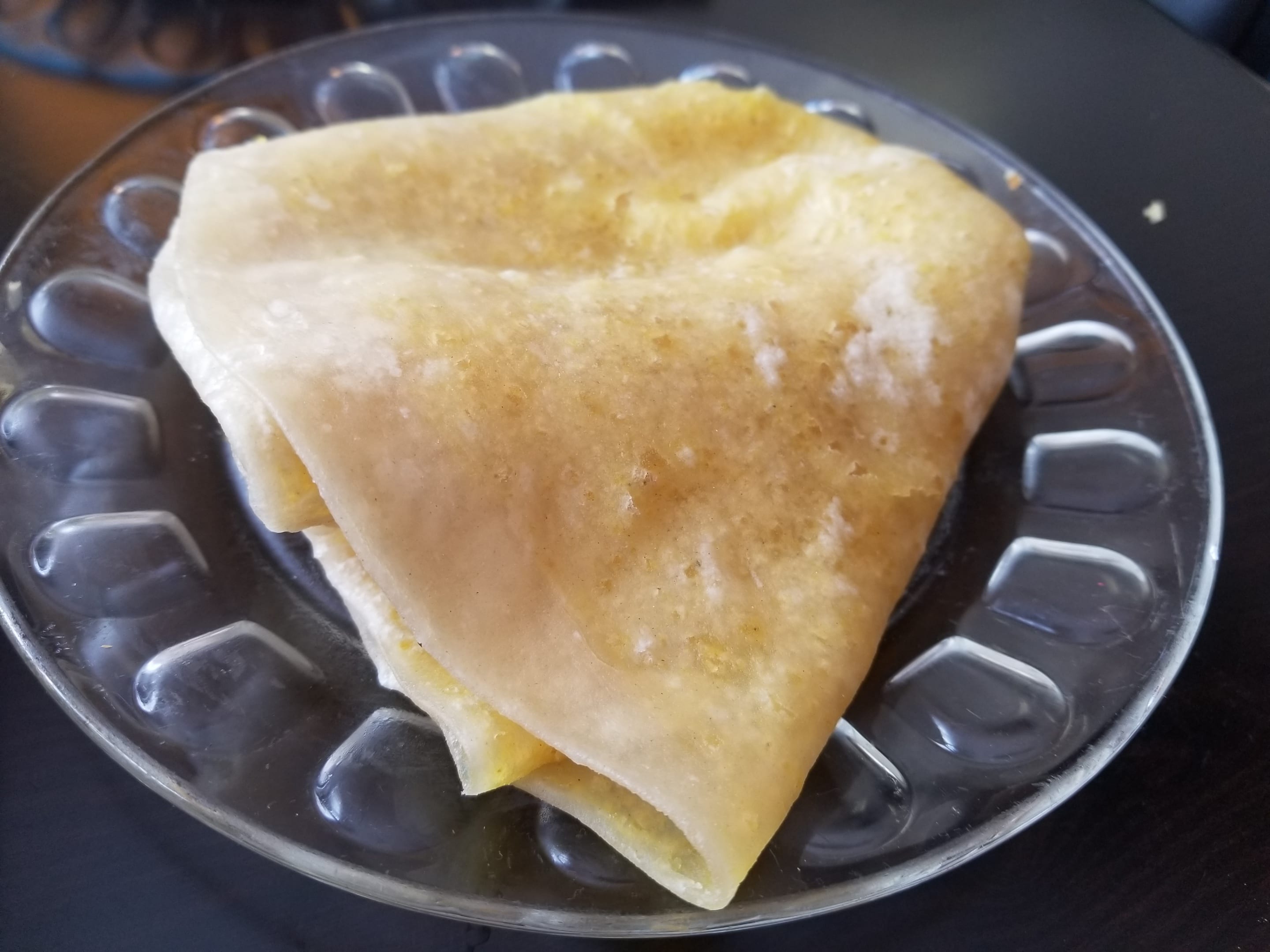 The Dhalpouri roti was traditional flatbread served with Island Paradise’s Trinidadian potato curry. This was a dish that had some really good spice to it and I loved it! I feel like a lot of restaurants are afraid to really serve well-spiced dishes, but I’m happy to report that Island Paradise doesn’t cut any corners when it comes to flavors. 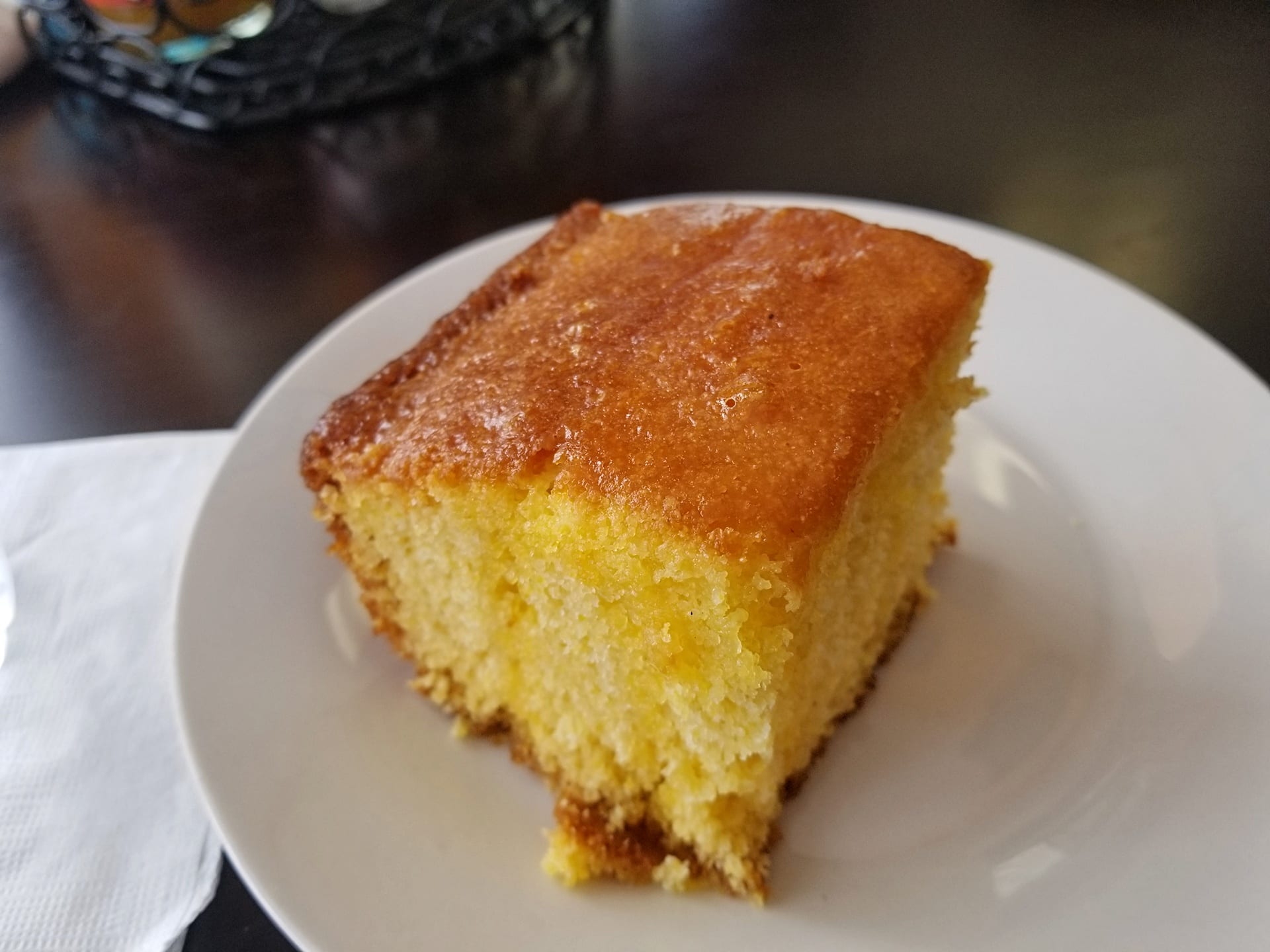 The cornbread went wonderfully with everything and the sweet plantains were perfection. Fun fact about me: sweet plantains is one of my all-time favorite foods and I order it whenever I see it on a menu. 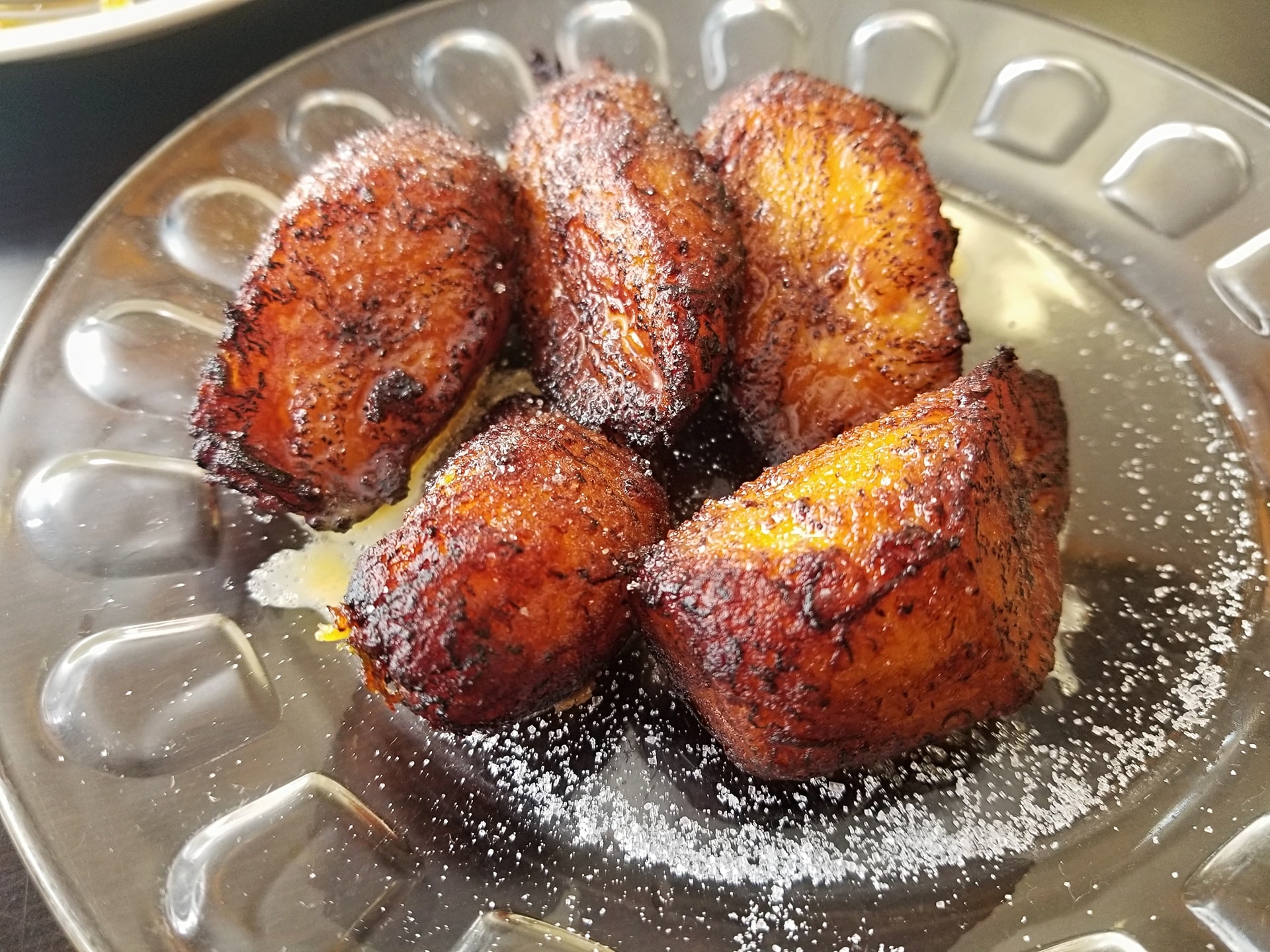 A line on Island Paradise’s menu reads, “Where the island meets the mainland.” and my experience here reflected that mantra perfectly. If you’re looking for traditional Caribbean food in a bright atmosphere served by friendly people, then this is the spot for you.