Skip to content
Published on Tuesday, May 26th, 2020
by Michael DeMocker

Stop me if you’ve heard this one: a priest and a dog walk into a cemetery… and never leave.

The story of the ghosts of St. Roch Cemetery begins in the middle of an epidemic (because you can’t hear enough about epidemics these days, right)? During the 1867 outbreak of yellow fever in New Orleans, German immigrant Reverend Peter Leonard Thevis was the pastor of Holy Trinity Church, currently the Marigny Opera House at 725 St Ferdinand St. To protect his congregation from the deadly virus, the good priest prayed to Saint Roch, patron saint of plagues and epidemics.

Saint Roch was an early 14th century figure, born in Montpellier, France, who ministered to the sick in Italy during an epidemic. He is famous for several acts of miraculous healing before becoming sick himself, going into self-quarantine in a forest. He was kept alive by a dog who brought him food, which is why St. Roch is also the patron saint of dogs. After his death, people prayed to him for medical miracles, especially when the Black Death swept through Europe later in the century.

MORE: So you think your NOLA pad is haunted? Here’s some things you can get to check

As yellow fever raged through the city of New Orleans in 1867, Rev. Thevis made a vow to St. Roch that he would build a chapel to the saint if the fever didn’t kill any of his parishioners. While the outbreak in 1867 did kill over 3,000 people in Louisiana, his congregation was spared as the virus disappeared like a miracle. Thevis kept his promise; he purchased land on what is today St. Roch Avenue and in 1875 built the promised St. Roch Chapel as well as the St. Roch Cemetery #1 to serve his congregation. A few years later, he opened St. Roch Cemetery #2 but he died in 1893 before he could see the mortuary chapel he planned completed. Rev. Thevis was interred in the floor in front of the altar in the chapel he built as a promise to St. Roch. 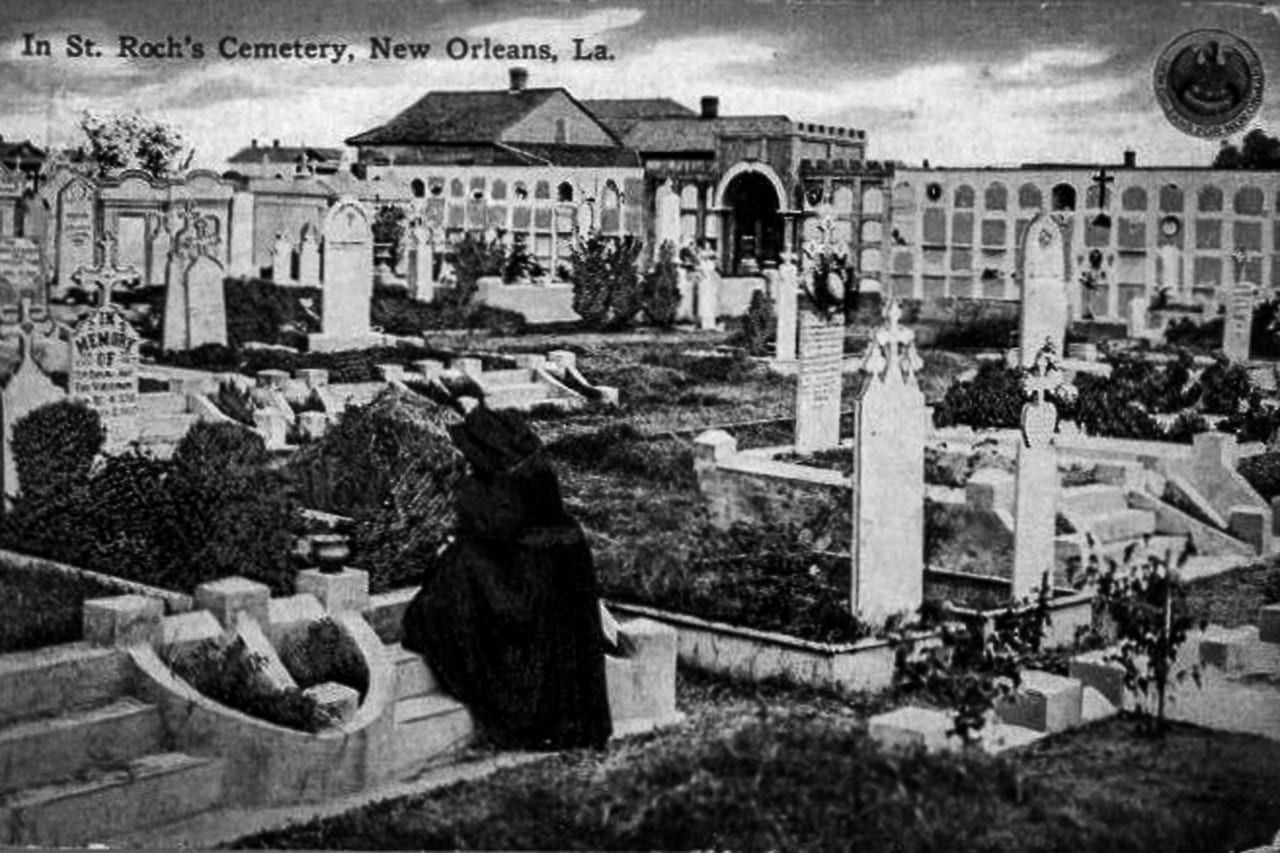 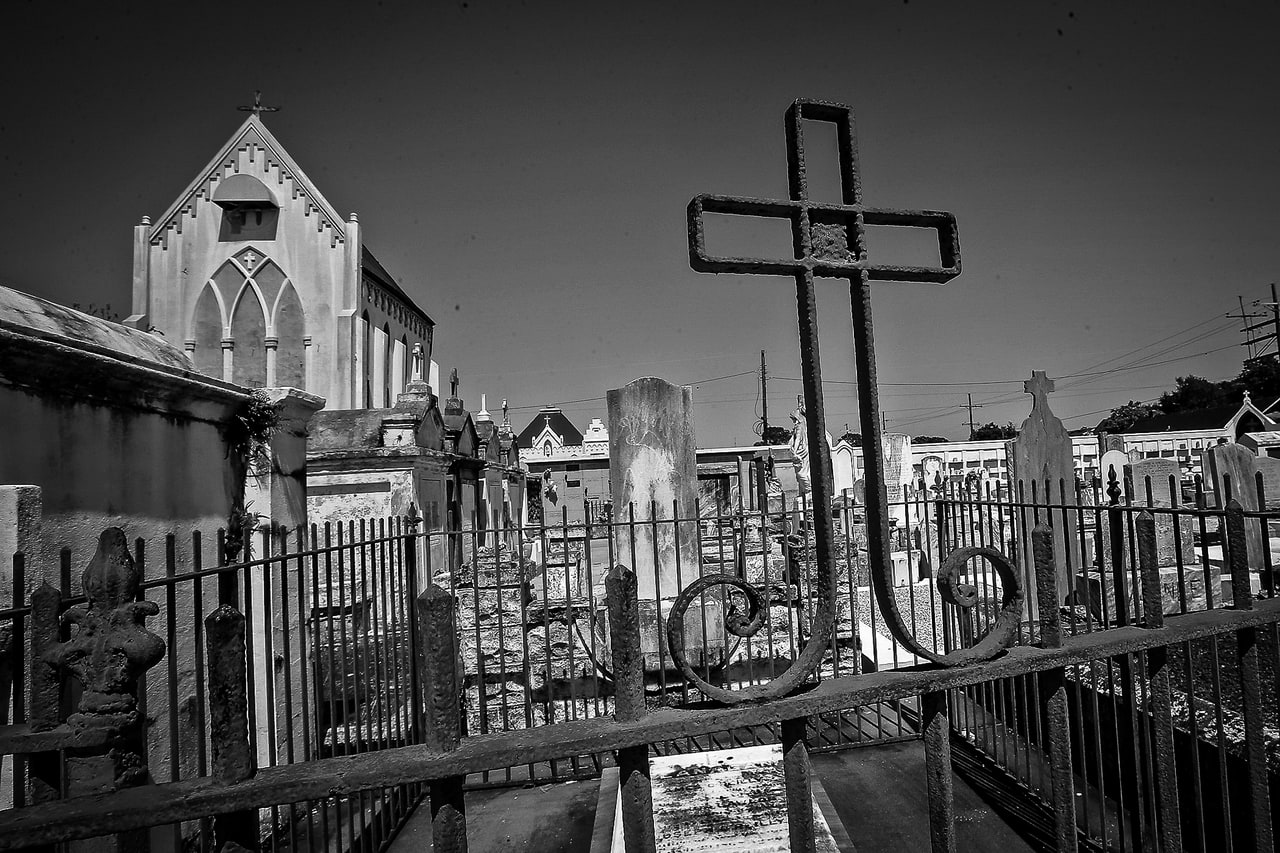 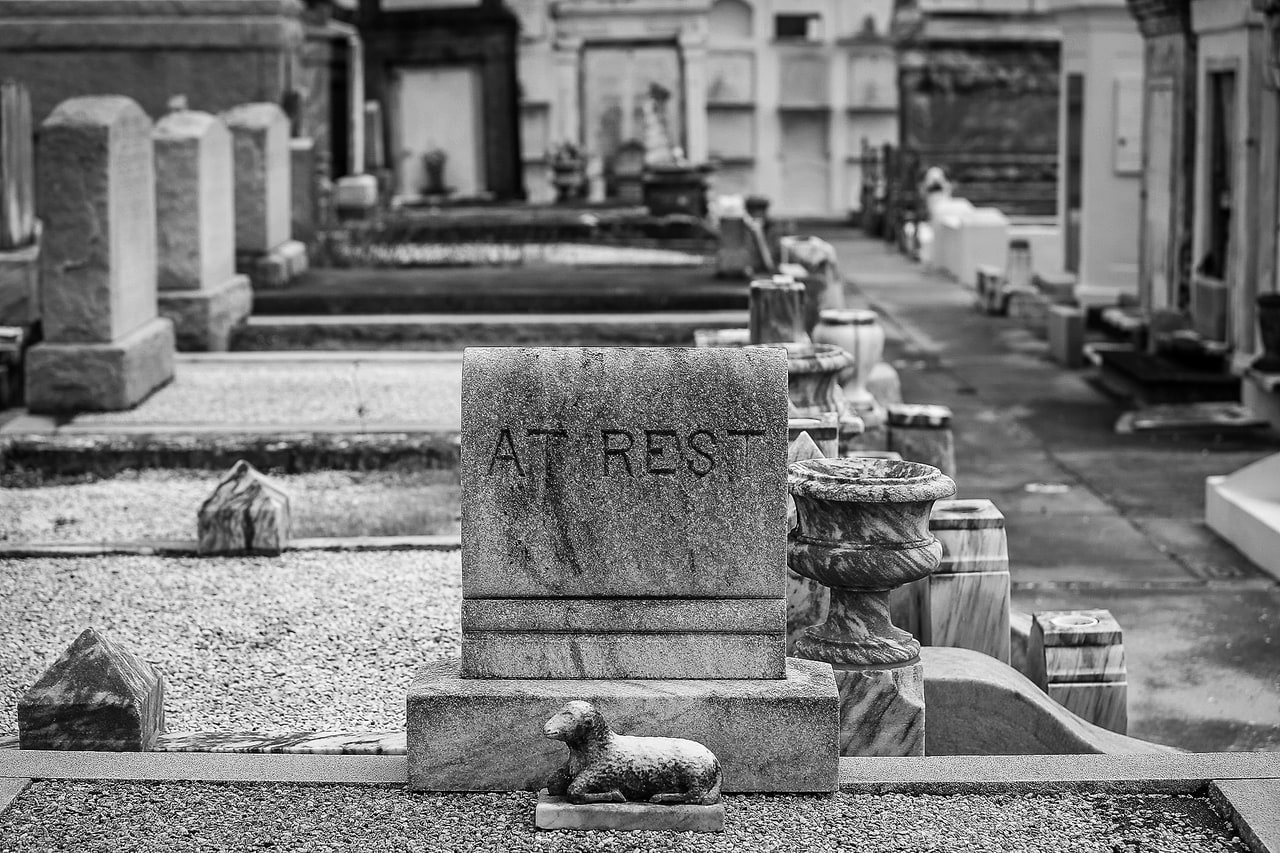 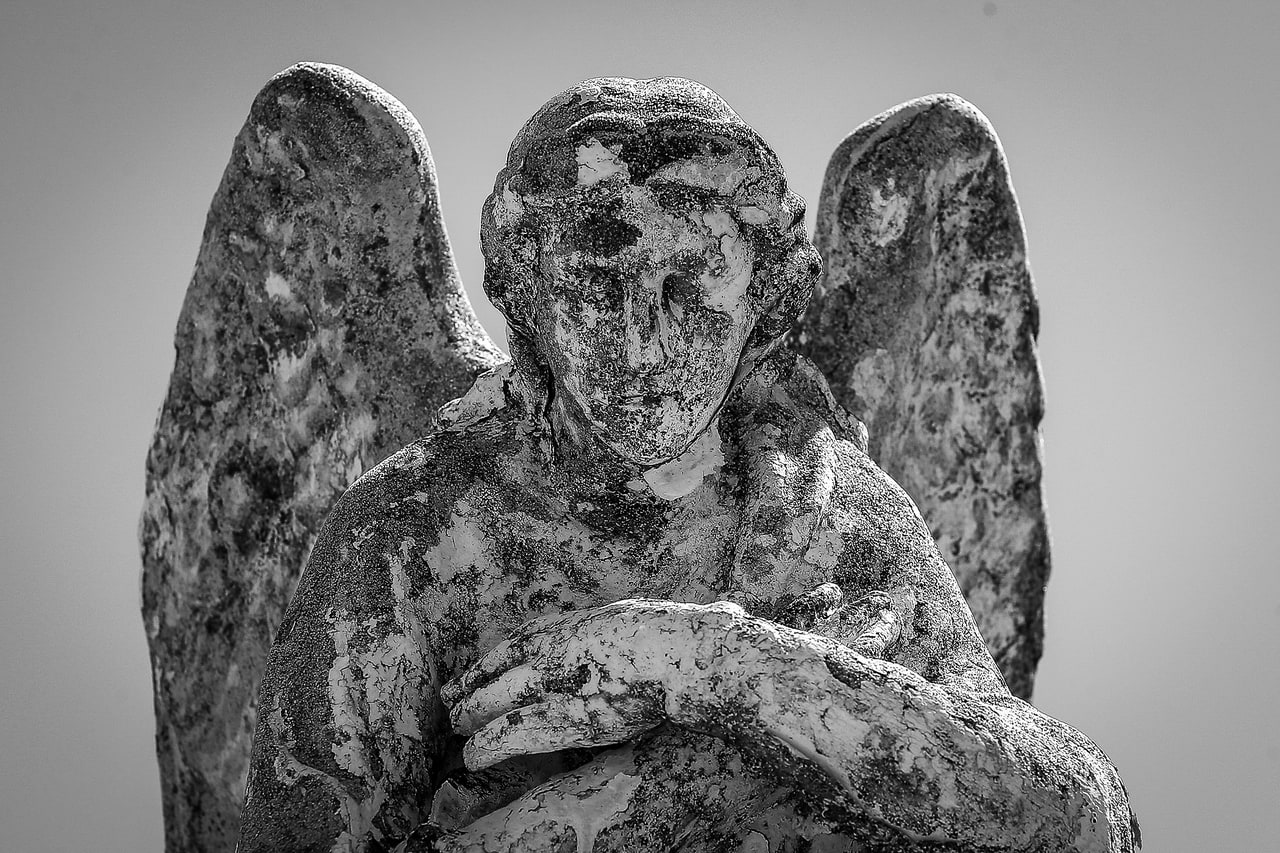 1 of 4
A vintage postcard of a mourner in St. Roch Cemetery. (Wikimedia Commons)

But apparently, he wasn’t done watching over his flock.

Today, a wrought-iron entrance gate on St. Roch Avenue is flanked by two angels, statues who reportedly lost their wings in a long-ago hurricane (which is just so New Orleans). The St. Roch Chapel looms ahead, an inscription over the door reading, “The National Shrine of St. Roch, patron saint of miraculous cures in fulfillment of vow 1875.”

Off the right side of the Gothic-style , blue-ceilinged chapel is a small room containing an eclectic collection of offerings of thanks to St. Roch brought by pilgrims: crutches, braces, plaster casts of healed limbs, and various other tokens of gratitude. While the chapel is currently closed for renovation, you can see these items through a barred window on the south, or Westbank, side of the chapel.

As if these ex-votos aren’t odd enough, people have reported a robed ghost, possibly Rev. Thevis himself, that walks the pathways of the graveyard at night, benevolently watching over the tombs. The ghost has also been seen inside the chapel that Rev. Thevis built.

A second ghost also roams St. Roch #1, a large dark-colored dog that wanders between the tombs. Witnesses say it is impossible to corner or trap the dog, that it disappears into tombs or into thin air before anyone can get close. Remember, St. Roch is, after all, the patron saint of dogs.

Messages from beyond the grave

Another spooky tale from St. Roch Cemetery comes from the early 20th century and involves a young woman named Carrie who was madly in love with a young man named Jimmy. He gave her a bunch of roses in three different colors, telling her to break the code he was sending. It turns out that the number of each color of rose represented the number of a letter of the alphabet, in this case “ILC” or “I Love Carrie.” This is how people texted back before cellphones.

Carrie plants rose bushes by his tomb and her heart goes on despite losing Jimmy. Soon a well-to-do suitor from out of town pursues her and proposes. Carrie goes to Jimmy’s grave in St. Roch, unsure of whether she can accept the proposal from this handsome but sketchy beau. She begs her fallen fiancé for an answer as to whether she should accept the proposal of marriage. Suddenly, roses bloom on the rose bushes by his tomb, fourteen red and fifteen blue. He had rose-texted her “N-O” from beyond the grave.

Carrie accepted the roses’ message and refused the proposal. The bachelor took it badly, disappearing into the night. A couple of days later, word came that NOPD had arrested the suitor for previously marrying and killing two Creole girls to get at their fortunes. The spirit of Jimmy in St. Roch Cemetery had saved Carrie (rose, heart, ghost emojis).

Perhaps it was Carrie’s undying love and good fortune that led to another St. Roch Cemetery legend: It is said that single women who come to the cemetery on Good Friday to pray to St. Roch for a husband will have their wish granted.

RELATED: Haunted? Here’s some gadgets that claim to help find out

As the pandemic continues to shapeshift the New Orleans restaurant and bar landscape, two more local institutions fall by the wayside, casualties of the city’s current economic uncertainty.

Here's a list of local options for Thanksgiving takeout

Thanksgiving is going to look a little different than it has in past years, but it can taste just as good, maybe even better. The unusual social climate we’ve been...

It's 'Poor Boy' not 'Po-Boy': The Parkway Bakery is THE sandwich staple

Parkway Bakery and Tavern is a New Orleans institution that dates back over 100 years.

From dipped strawberries to ube flavor and even vegan options, these home bakers have something special for your holiday dessert table.