Erion Williams is all about giving back and moving forward. As the saxophonist for The Soul Rebels, a brass band of almost mythical status, he has toured the world and played with legends from across genres — Nas, Lauryn Hill, Metallica and Marilyn Manson, to name a few — pushing boundaries and breaking rules. With the release of their latest album, “Poetry in Motion,” The Soul Rebels push the envelope even further, drawing on hip-hop, New Orleans brass band music and marching band music, as well as reggae and Latin, fusing it all together with muscular horns and inspired arrangements. They will be celebrating the release of the record Friday at Tipitina’s with an all-star lineup of special guests, including Tarriona Ball, of Tank and the Bangas.

But as proud as he is of his onstage accomplishments, it’s what he does offstage, teaching at the Trombone Shorty Academy and at the Roots of Music, that inspires him the most.

From student to teacher 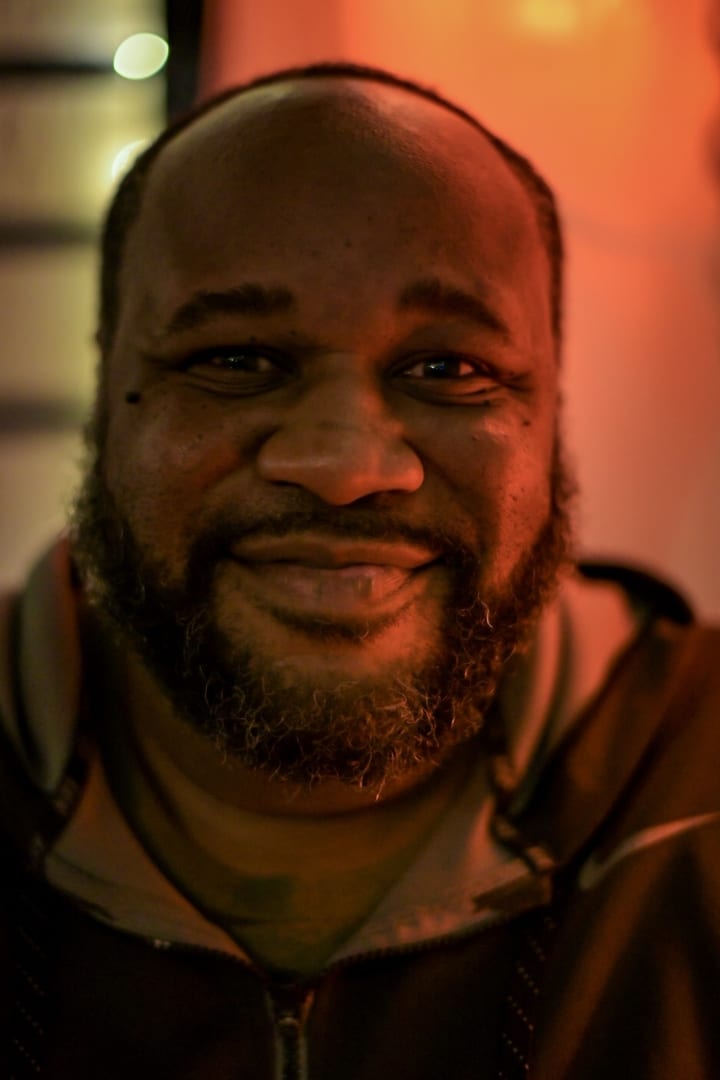 “Those endeavors are probably even more important to me than The Soul Rebels,” the burly Williams said. “We’re teaching brass band music to the community of New Orleans. Look, we didn’t have that coming up. We had to learn that playing on the street in the Quarter in front of Cafe du Monde or in Jackson Square, learning from the older guys, which, trust me, was a hell of an education. But we have world-class teachers teaching how to become a professional musician in the city of New Orleans.”

This generosity of spirit is quintessential Williams, who, along with being preternaturally gifted, is also among the nicest musicians in New Orleans. And he comes by both naturally. Growing up in the Lower 9th Ward, he was surrounded by music and a family of affable musicians, including his cousin, Kermit Ruffins. Yet that wasn’t his primary motivation to pick up the saxophone.

“I think I just picked it because I was trying to get out of class in fourth grade,” Williams said with a laugh. “I think it was a need at that time. I picked it up and it just fit. Once I got the hang of it it, became natural for me.”

Williams followed his passion to St. Augustine High School, honing his chops in the school’s renowned Marching 100 and learning the discipline and dynamics that he prominently features to this day.

“As far as soundwise, it helped me project more, because, when you’re in a marching band in New Orleans, everyone just wants you to play loud and everything. But it’s not even about that. It’s about dynamics, it’s about playing together and it’s about playing in an ensemble. When you have 100 pieces, one person cannot stick out,” Williams said emphatically.

This notion of an ensemble, in which the whole is greater than the parts, is the essence of The Soul Rebels sound. 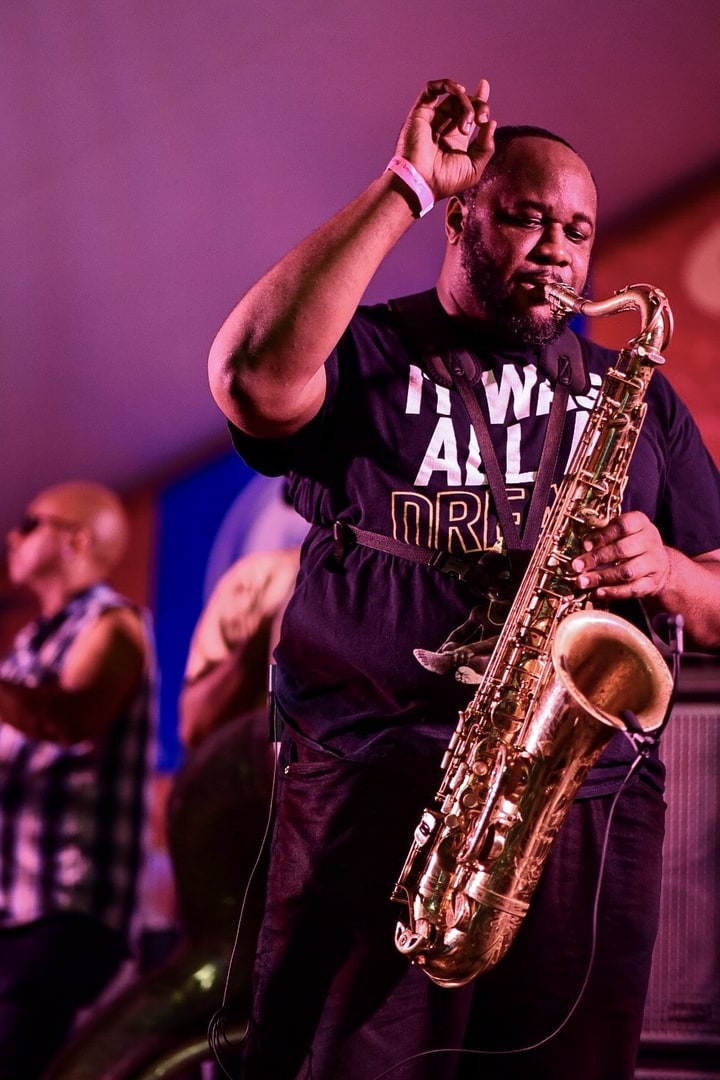 Fortuitously, it was the failure of one of these parts that helped Williams, who was playing with the Stooges Brass Band at the time, join The Soul Rebels in 2005.

“You got your horn?”

“One night — this was in 2004 coming into 2005 — I went to Le Bon Temps to see The Soul Rebels, and it just so happened the saxophone player had called out that night. So they said, ‘You got your horn? Come play.’ And I wound up playing the whole night. Then it was, ‘Come play this gig. Come play that gig.’ Then they called me and said they wanted me in the band. I’m in!” 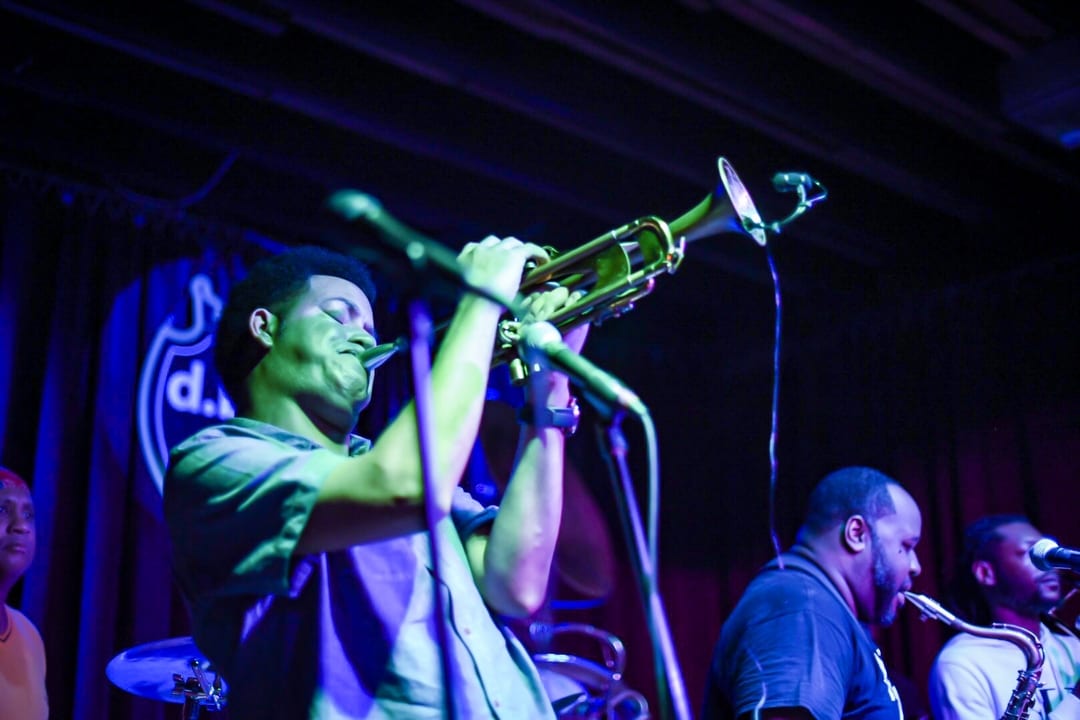 Within five years, Williams went from being a junior member of the band to a fan favorite, and his cool demeanor made him a natural leader. By 2010, he began taking on frontman duties, writing set lists and hyping up the crowd.

Today, he continues in that role, playing liaison between the band and the audience, which is often expecting something more traditional from a New Orleans brass band.

It’s horns, still horns playing. But guess what? It’s infused. It’s hip-hop. It’s funk, it’s reggae, it’s house music. It’s like, we can give you anything and adapt to any situation.”

Any fears the audience may have are quickly allayed when The Soul Rebels launch into “504”, a paean to New Orleans from 2012’s “Unlock Your Mind,” or “Down for my City” from their current release, “Poetry in Motion,” a love song to our unique culture. This is a band who unabashedly loves New Orleans and its musical traditions and is ready to take them to the next level, with no limitations. The new album is rife with collaborations and crossover, with Robert Glasper, Trombone Shorty, Mia X and even Emeril Lagasse, among others, contributing music and verses. The hip-hop and Latin-infused offerings, buoyed by the pulsing horn section and street sound of second line drumming, is infectious. And yes, it’s still jazz, as evidenced by the complex interaction of melody and harmony with the ensemble tightness of a marching band.

The new sound of New Orleans

But at the end of the day, it’s all about fun, expression and the city of New Orleans. There’s no place like home. And for The Soul Rebels, home is Le Bon Temps Roule, the Uptown bar on Magazine Street where they have held court on Thursday nights for years.

“It’s my favorite spot to play. I love it. This is the place where everybody knows, if you wanna see The Soul Rebels, you gotta come on Thursday nights. It’s loose. Everybody’s hair’s down. It’s a house party. Ain’t no real rules.”

For Williams and The Soul Rebels, this “do whatcha wanna” attitude comes with the territory, as they are charting a new sound and taking it everywhere.

Where you can catch the Soul Rebels