The Germaine Cazenave Wells Mardi Gras Museum is named after one of Carnival’s most notable monarchs.

I love hidden treasure and what better time than Mardi Gras, to explore one of the lesser-known, hidden gems in one of New Orleans’ most beloved restaurants? OK, it might not be that lesser-known; anyone who has had the opportunity to dine at Arnaud’s Restaurant is probably at least somewhat familiar with the Germaine Cazenave Wells Mardi Gras Museum, but this piece of New Orleans history, hidden in plain sight, comes with an interesting story.

Founded in 1918, by French wine salesman Arnaud Cazenave, Arnaud’s Restaurant is located in the French Quarter and is the largest restaurant in New Orleans. Count Arnaud prided himself on dedicating much of his vast fortune to the expansion of his namesake restaurant. As a result, he kept buying properties until Arnaud’s had covered much of its block. In 1978, Aranud’s was bought by Archie and Jane Casbarian, and the restaurant is still owned and operated by the Casbarian family to this day.

Germaine Cazenave Wells was the daughter of original owner, Count Arnaud. Wells was a woman who knew how to have a good time and has been described as dramatic, loud and headstrong. She had a deep passion for life and, when it came time for her to take over Arnaud’s, she learned all that she could in order to maintain the restaurant legacy her father had so carefully built. She once defined the restaurant business as a play in two acts — lunch and dinner.

Everywhere Wells went, whether it was Paris or New York, she was talking about Arnaud’s and it was her public-relations savvy that landed Arnaud’s on lists of “the world’s best restaurants” multiple times. 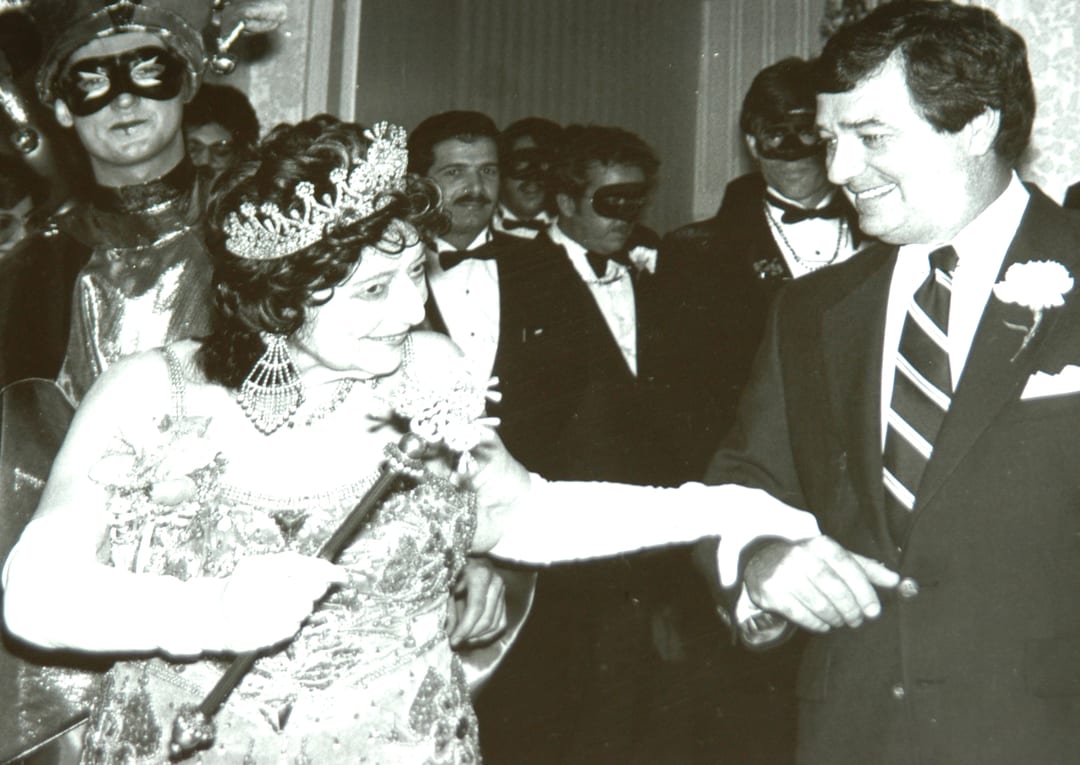 As any good New Orleans woman, Wells was a huge fan of Mardi Gras, and herself reigned as queen of over 22 Mardi Gras balls from 1937 to 1968, more than any other woman in the history of Carnival. Every year, she would celebrate sixth night by wearing one of her many Mardi Gras gowns to dinner and served Cornish game hen on Twelfth Night, which is still served at Arnaud’s every Jan. 6. Hey, if my family owned the fanciest restaurant in town, I too would probably be wearing Mardi Gras gowns 24/7! Throughout the years, Wells not only maintained her own Mardi Gras ball costumes, but collected other costumes that were given to her for safekeeping. They were kept in a private collection that she would show off to close friends. 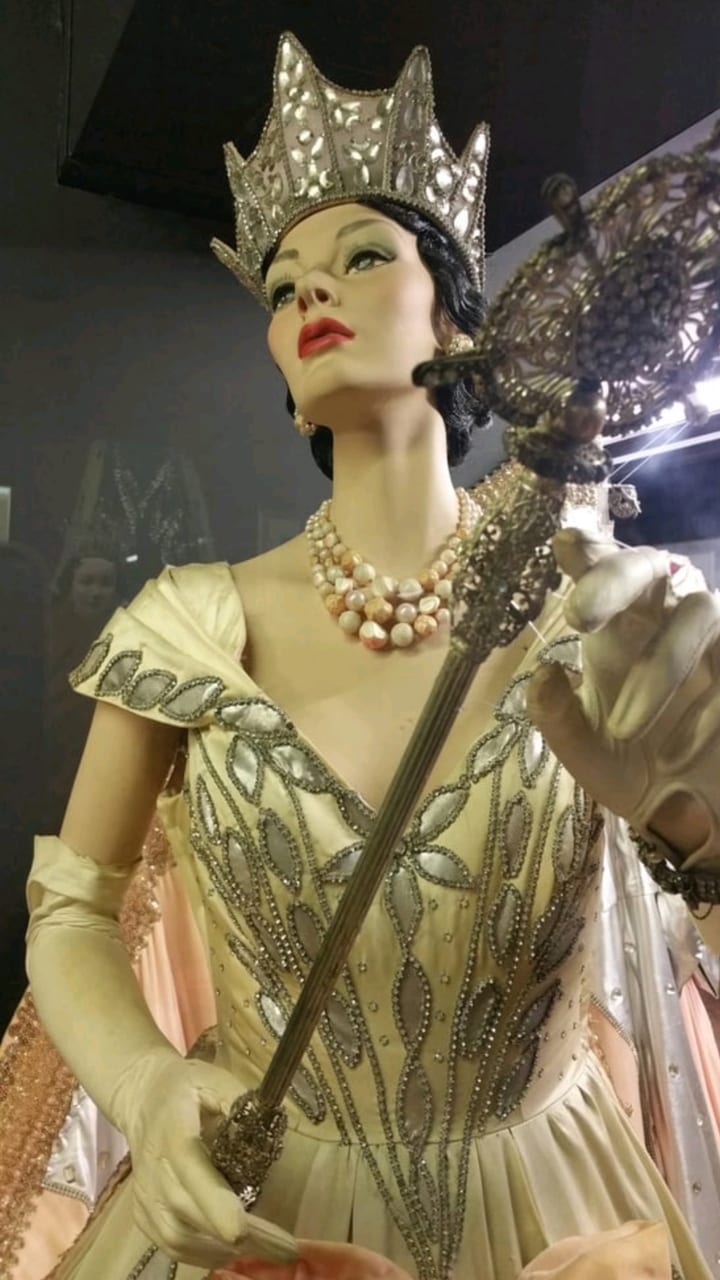 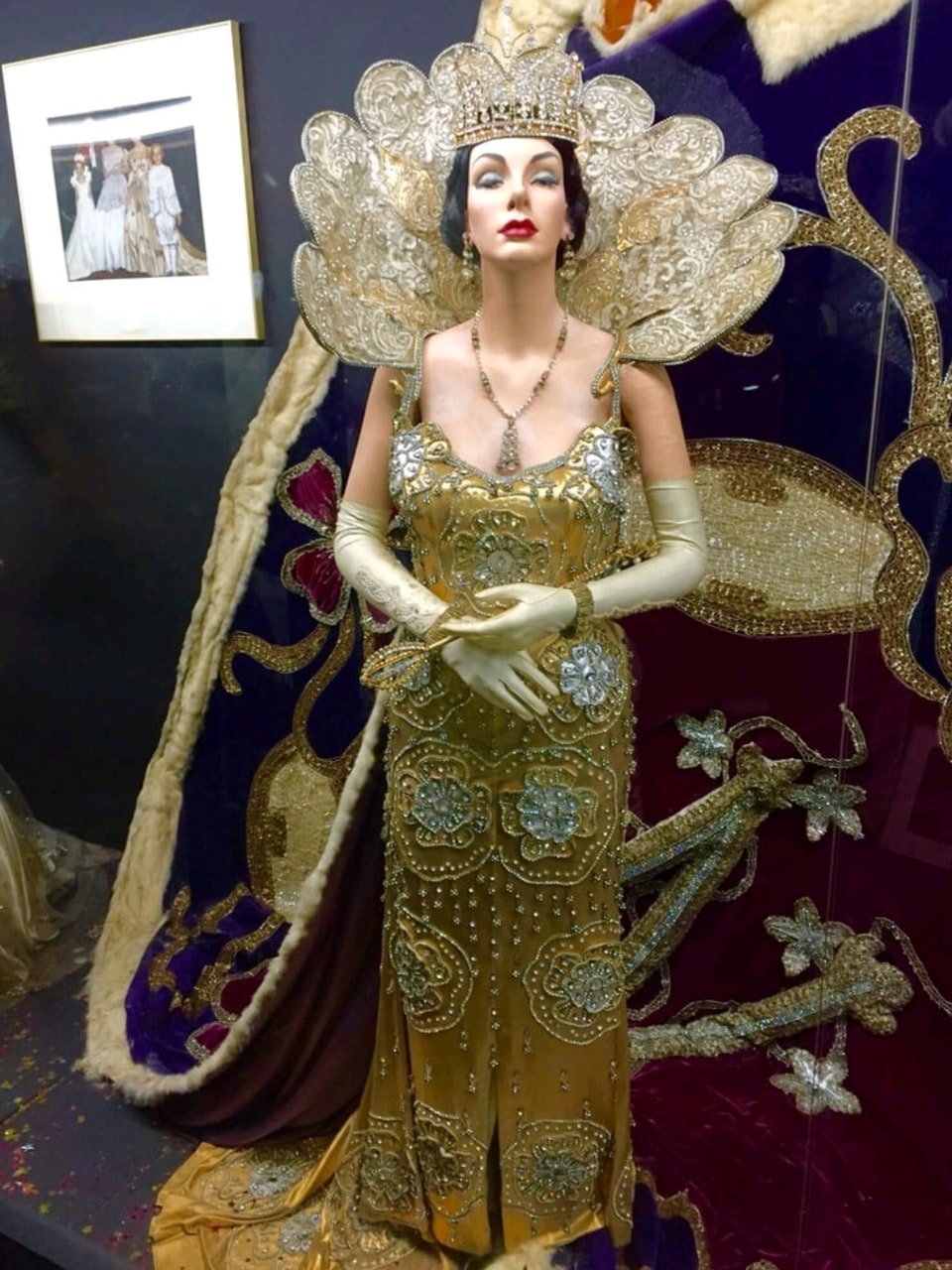 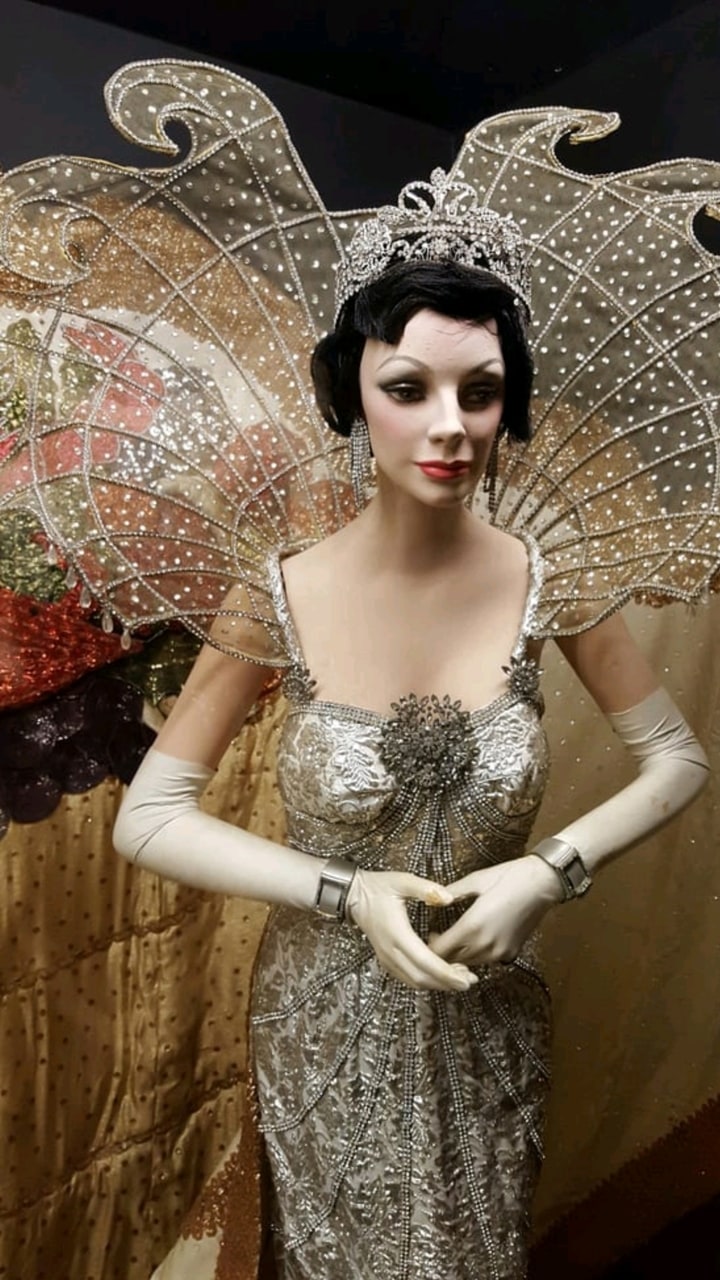 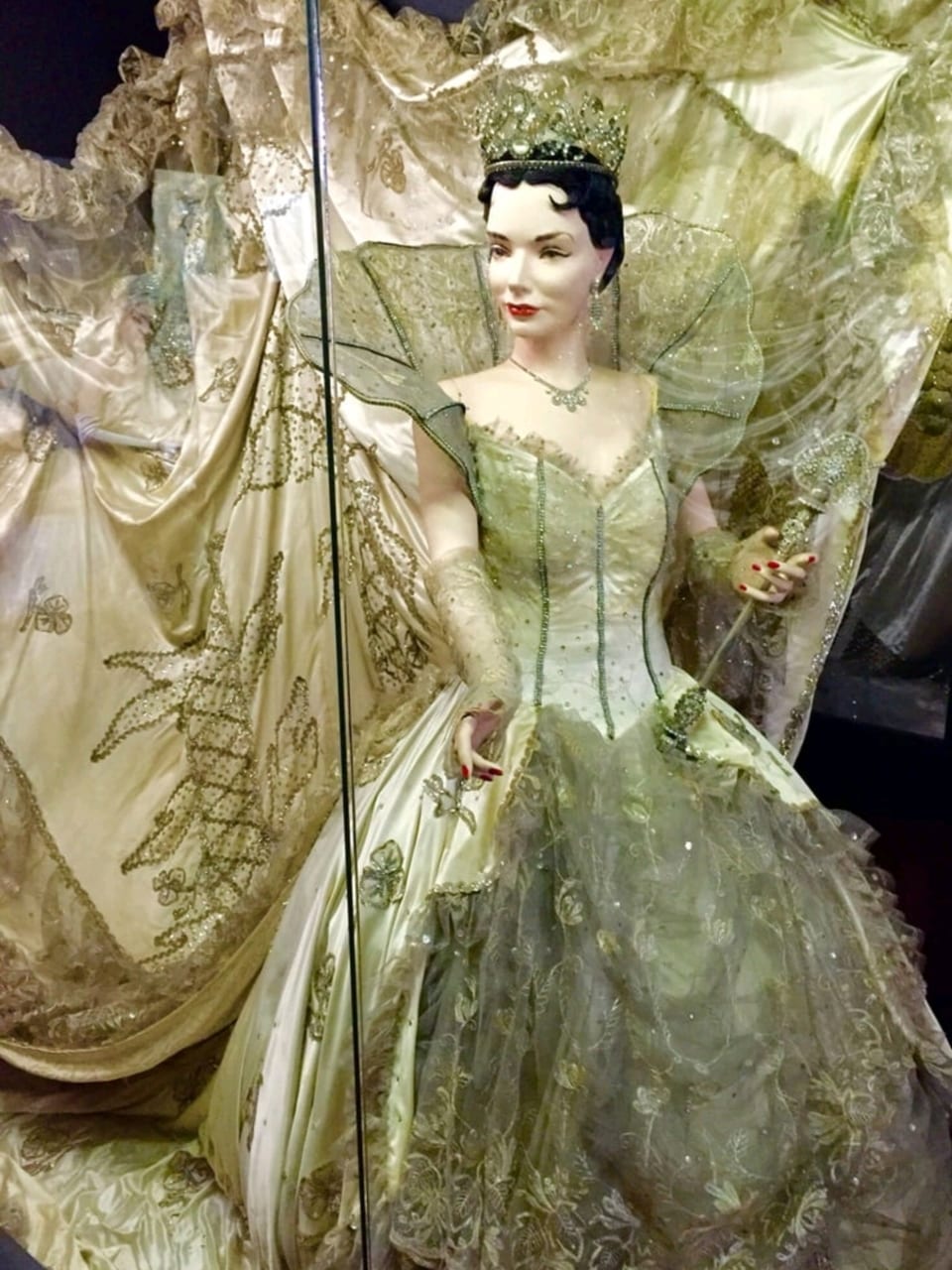 When the Casbarian family bought Arnaud’s, the restaurant needed a lot of work: most of the dining rooms were closed and a complete renovation commenced. Archie Casbarian, one of America’s great hoteliers of the day, and general manager of the Royal Sonesta, was determined to restore Arnaud’s to its former glory. To keep the feel of the original restaurant, original chandeliers, ceiling fans, iron columns and cypress paneling remained. The Casbarian’s goal was to freshen the space, but keep the Arnaud’s spirit.

During the renovation, Wells’ Mardi Gras costume collection was discovered in a storage space in the restaurant. Over the years, Wells had acquired two dozen Mardi Gras costumes including 13 of her own queen costumes, one of her mother’s, one of her daughter’s, six children’s costumes and four king’s costumes worn by Count Arnaud himself. The simple storage space that holds all of these Mardi Gras treasures was renovated in 1983 and converted into a full museum, named in Germaine Cazenave Wells’ honor. 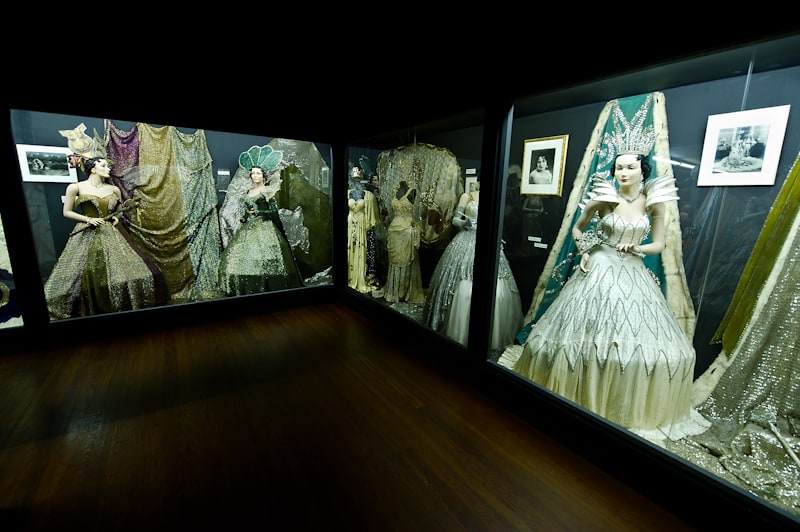 The oldest costume in the collection was worn by Wells’ mother, Lady Irma, in 1941 when she portrayed “Good Queen Bess” as the Queen of Iris and is called the Empress Gown. The most recent gown is Wells’ own Queen of Hera costume, which she wore in 1968. The museum also includes vintage photographs of Mardi Gras gone by, Carnival masks, costume jewels, krewe invitations and other ball favors on display.

If you’re looking to experience a piece of Mardi Gras history that’s a little “extra,” then the Germaine Cazenave Wells Mardi Gras Museum is definitely for you. It’s located at Arnaud’s Restaurant and is open to the public for free viewing daily, during normal restaurant hours: 6 p.m. to 10 p.m. nightly and 10 a.m. on Sundays.