‘How do you plan a business around that?’

Following a prudent decision to reopen Gris-Gris for dine-in service, chef Eric Cook and his team said they did everything they were supposed to do. They researched government mandates and guidelines. They scrubbed and sanitized, spaced apart the tables and slipped on facemasks. Then, on July 1, the Lower Garden District restaurant eagerly welcomed guests with table reservations through its doors.

But not even a week later, an employee told Cook he wasn’t feeling well and then tested positive for COVID-19. Cook opted to shut down the restaurant as a result.

“Legally, we don’t have to (close), but morally, it just seemed like this is what we should do. I don’t want to put people’s health at risk for the cost of doing business,” said Cook.

He revealed the news, along with his reasoning, in a Facebook post that has since been shared more than 2,000 times.

“An Open Letter To NOLA” To our friends, neighbors and family,As you know, we’ve been trying to fight the good fight…

“I firmly believe we are in this predicament because we have no clear or consistent leadership or direction,” he wrote in the missive. “The ‘spikes’ we are having within the city and state, whether you believe it or not, are something that’s obviously affecting everyone in this entire community – physically, psychologically, financially, and every way. We are forced to sit here and decide if we should go out of business or throw ourselves into the arena to try to scratch out some kind of living. We are the gladiators. As hard and well as we fight, we ultimately have no control over whether we stand a chance.”

Cook notes in the letter that he does not know when the restaurant will reopen.

“I felt if I didn’t get it off my chest, I was going to lose my mind,” said Cook, of the social media post. “I hoped it would open up the doors for a conversation, for people to say: ‘What is the crisis? Is the economy a crisis, or is a deadly virus the crisis? Because now all of a sudden it’s very serious again, and we’re right back where we started. If it’s that serious, then where’s the accountability? Where’s the liability for the people who lost their lives during the time where we were wrong? There’s none.”

Cook is one of many restaurateurs publicly addressing the challenges of reopening during a pandemic that has no end in sight. Collectively, some grievances are with the government, while others are with folks failing to do their part in flattening the COVID curve.

“I won’t be tracked or tested for this rona hoax.”

Farrow Stephenson, the co-owner of Mona Lisa Restaurant in the French Quarter, recently clashed with a customer over contact tracing. The person complained on Yelp.com that Stephenson “ruined” their dining experience by requesting a name and phone number, explaining: “I won’t be tracked or tested for this rona hoax.”

Stephenson reminded the “Neanderthal” that the practice is required by the city to fight coronavirus, which – he adds – is very real and dangerous.

“Maybe you should commit the rest of your knuckle-dragging existence to explaining to the over 130,000 families that have lost people to this ‘rona hoax’ why you continue to live in the fourteenth century,” he wrote. “I however choose to listen to scientists and will continue to do whatever it may take to stop the spread of COVID-19.”

Stephenson printed and posted the exchange on the front door of his restaurant.

“Restaurants are microcosms of society, and politics aside, I feel like society has a duty to respond to wrong-sided myopic views of science,” wrote Stephenson in an email. “Just because you don’t agree with it doesn’t make it untrue.”

“I am unsure how long New Orleans can continue to pump blood if it willfully ignores its own heart: the people who can’t work from home.”

Last week, Graison Gill announced the temporary closure of his business Bellegarde Bakery on Instagram, saying “the financial and emotional toll of COVID-19 has made it impossible to break bread and mill flour.” He also cited the city’s “hostile business climate” and social injustice as reasons for shutting down.

“The integrity and persistence of Black Lives Matter has made America aware that what we need now is not just a makeover – our country and our city need an organ transplant. We must structurally and systemically transform how we live,” he wrote. “I am unsure how long New Orleans can continue to pump blood if it willfully ignores its own heart: the people who can’t work from home. The people who make our music, serve our drinks, build our homes, paint our murals, teach our children, bake our bread, the New Orleanians who make New Orleans are at risk of extinction because brutal social and economic policies have made it unbearable to live here.”

Bellegarde is open through July 25 until further notice.

Frustration and the future

“F*ck each and every one of you who refuse to take Covid seriously.”

On July 11, Scott Wood, the owner of Courtyard Brewery, took to Twitter to express his frustration with people who won’t mask up.

“Okay so we were planning on reopening next week but now thanks to all you dumb motherf*ckers who refuse to wear masks we won’t be reopening. F*ck each and every one of you who refuse to take Covid seriously. Quote me.”

Okay so we were planning on reopening next week but now thanks to all you dumb motherfuckers who refuse to wear masks we won't be reopening. Fuck each and every one of you who refuse to take Covid seriously. Quote me.

His message has been retweeted nearly 9000 times at the time of this story’s publication.

“As individuals, we can do one of two things. One is socially distance. And the second is just wear a stupid mask,” said Wood. “I know it’s not fun to have to put on a mask and remind yourself that there are people who are sick, and that you could be one of the ones who’s getting them sick. But it’s something that’s necessary, from what we understand, and it’s what’s best for everyone else.”

When writing the brief dispatch, Wood thought of friends and family who haven’t been able to leave their house in four months because they are immunodeficient.

“All of that is in that tweet – that rage for my people who I talk to on a daily basis and hear how they’re struggling with all this sh*t,” said Wood, adding that the tweet is not meant to be a political statement. Both liberals and conservatives are the culprit, he says.

“You can clearly see that there are people who are just lazy about it – wearing (the mask) below their nose, wearing it on their chin, or just not wearing it and having it in their hand,” he said.

While closed, Courtyard Brewery will keep brewing and packaging beer. At some point, Wood will begin offering curbside pickup, and – whether he likes it or not – devising a long-term plan for operating during the pandemic.

“This thing is affecting all of us horribly. We just need to acknowledge it and stop pointing fingers; it doesn’t matter right now,” he said. “Right now, all that matters is that we reduce the infection rate, help out our hospitals, and then move on together. We can worry about arguing at another point. I love arguing. But right now is not the time … Just focus on how our lives affect others. Just wear a mask and be nice.”

“They don’t understand that if we don’t adhere to those rules, we lose our occupational license.”

Cook said he has also confronted customers who refuse to wear a mask.

“You have to look them in the face and say, ‘Unless you’re the mayor of New Orleans, put your mask on or you’re not coming in.’ And for people to say, ‘Well, it’s against my constitutional right.’ … They don’t understand that if we don’t adhere to those rules, we lose our occupational license,” said Cook. “People don’t understand that these mandates are not a political choice for business owners. They are basically a law that we have to abide by or we can’t operate. Call it unconstitutional, call it whatever you want. There’s no way around it as an owner. It should be a moral decision anyway.”

After experiencing what he describes as a dismal spring and summer, Cook is eyeing an unpromising fall and the possibility of a canceled 2021 Carnival season.

“How do you plan a business around that?”

“How do you plan a business around that? How can you financially, intelligently make decisions based on the fact that this city is closed, maybe through Mardi Gras?” he asked. “Some days I just have to stop thinking about it and just trust that the answers are there for me. I just have to be calm and patient, and believe and have faith that they’ll come to me.” 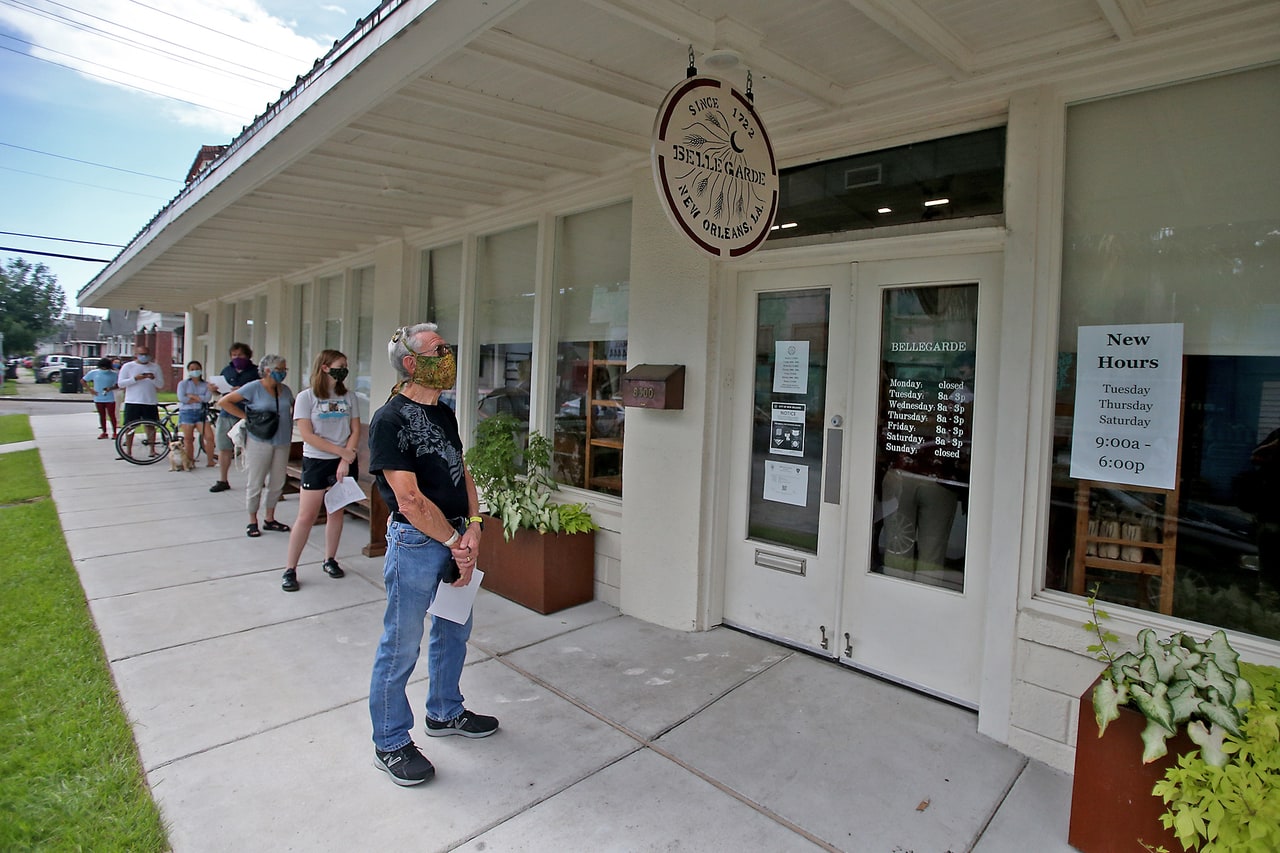 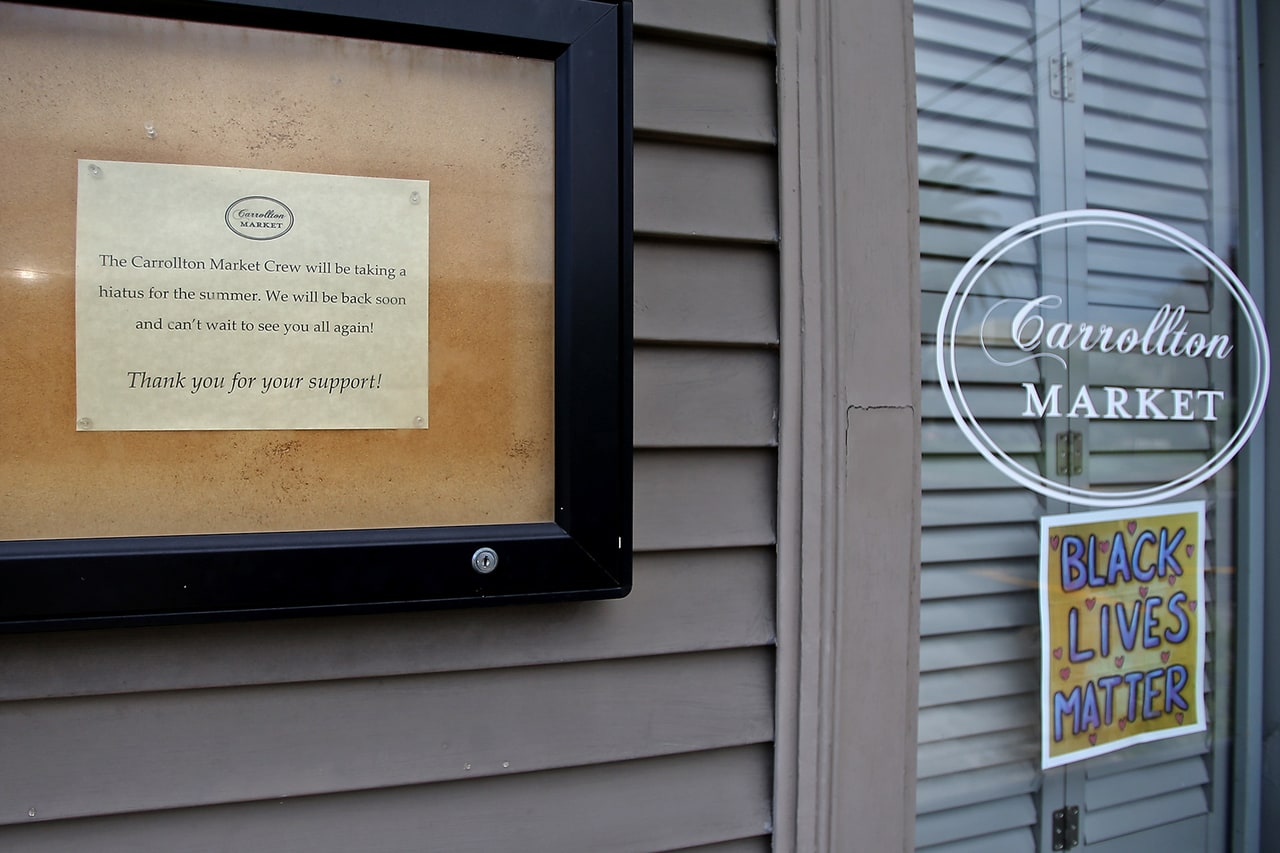 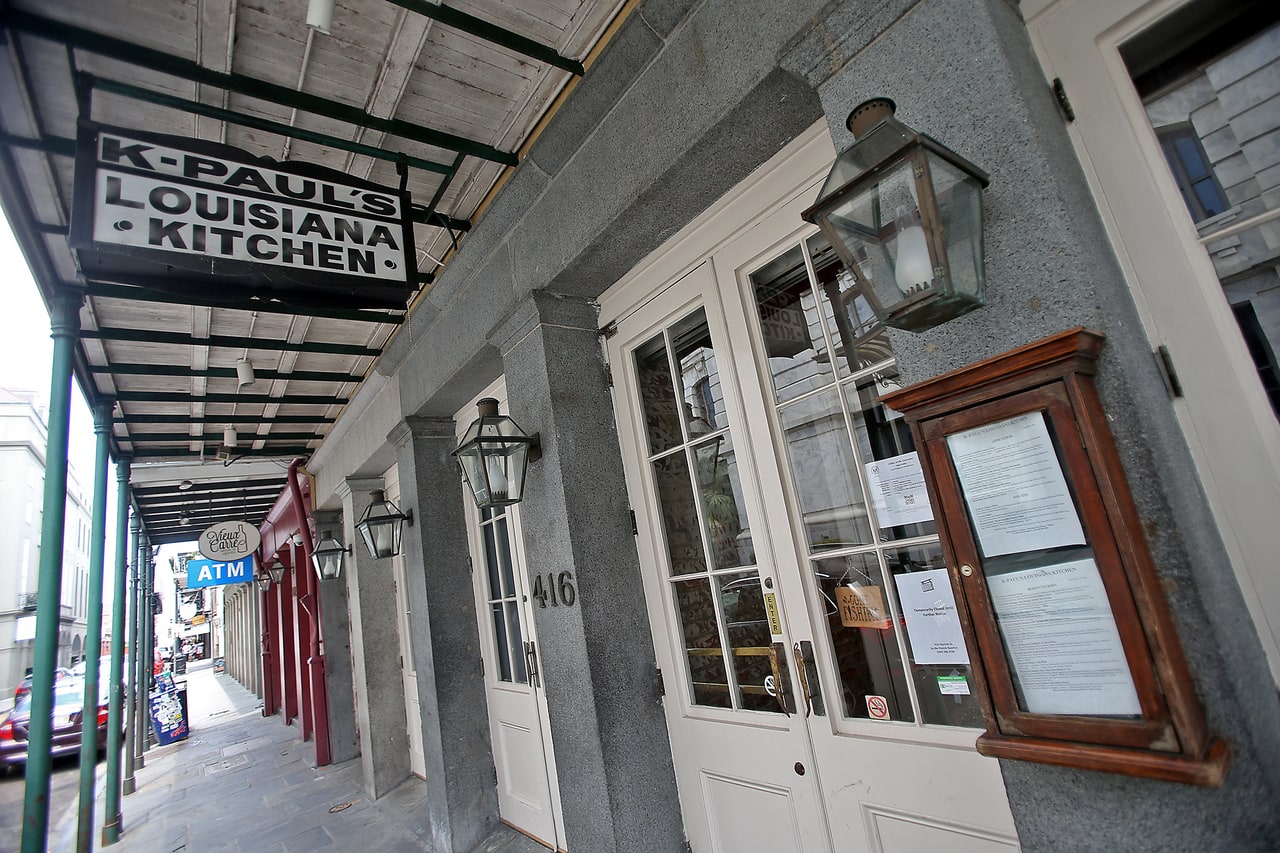 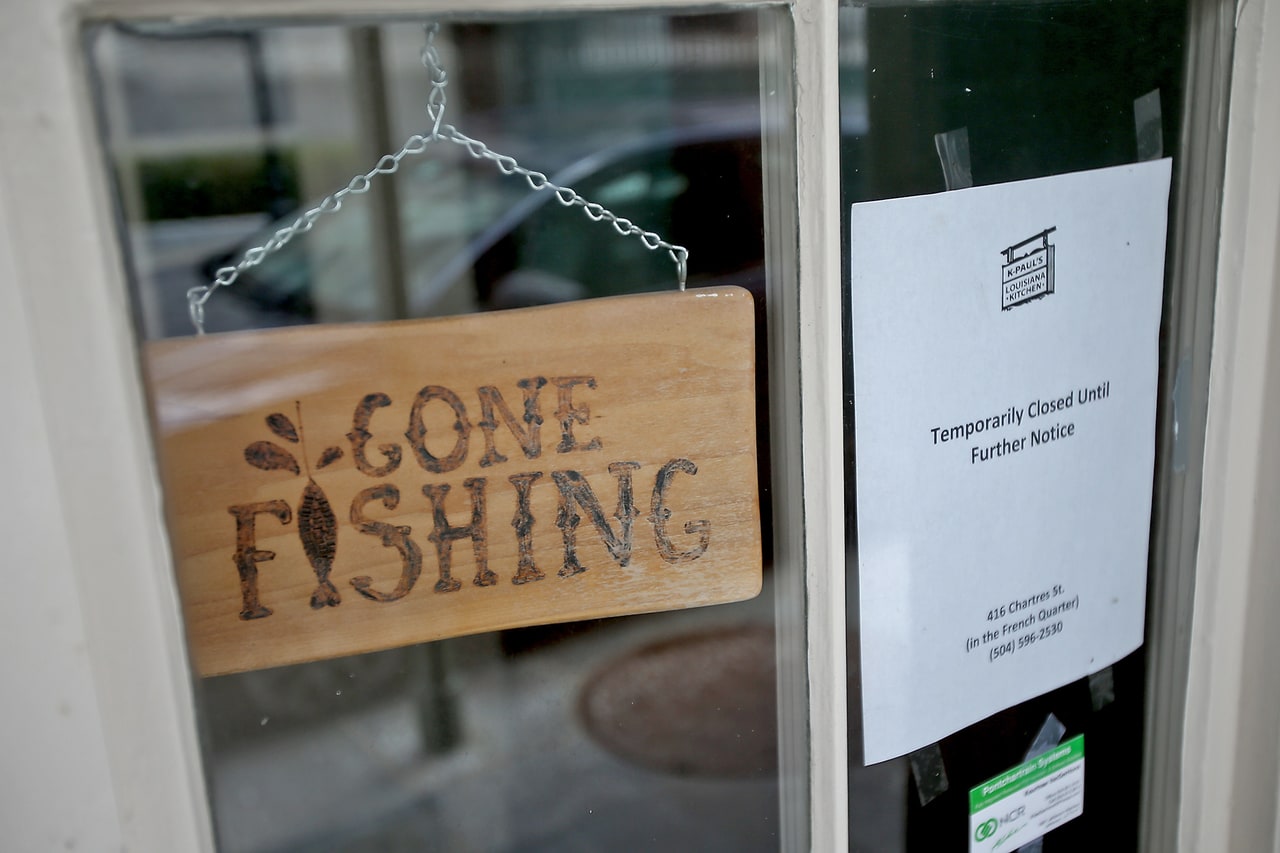 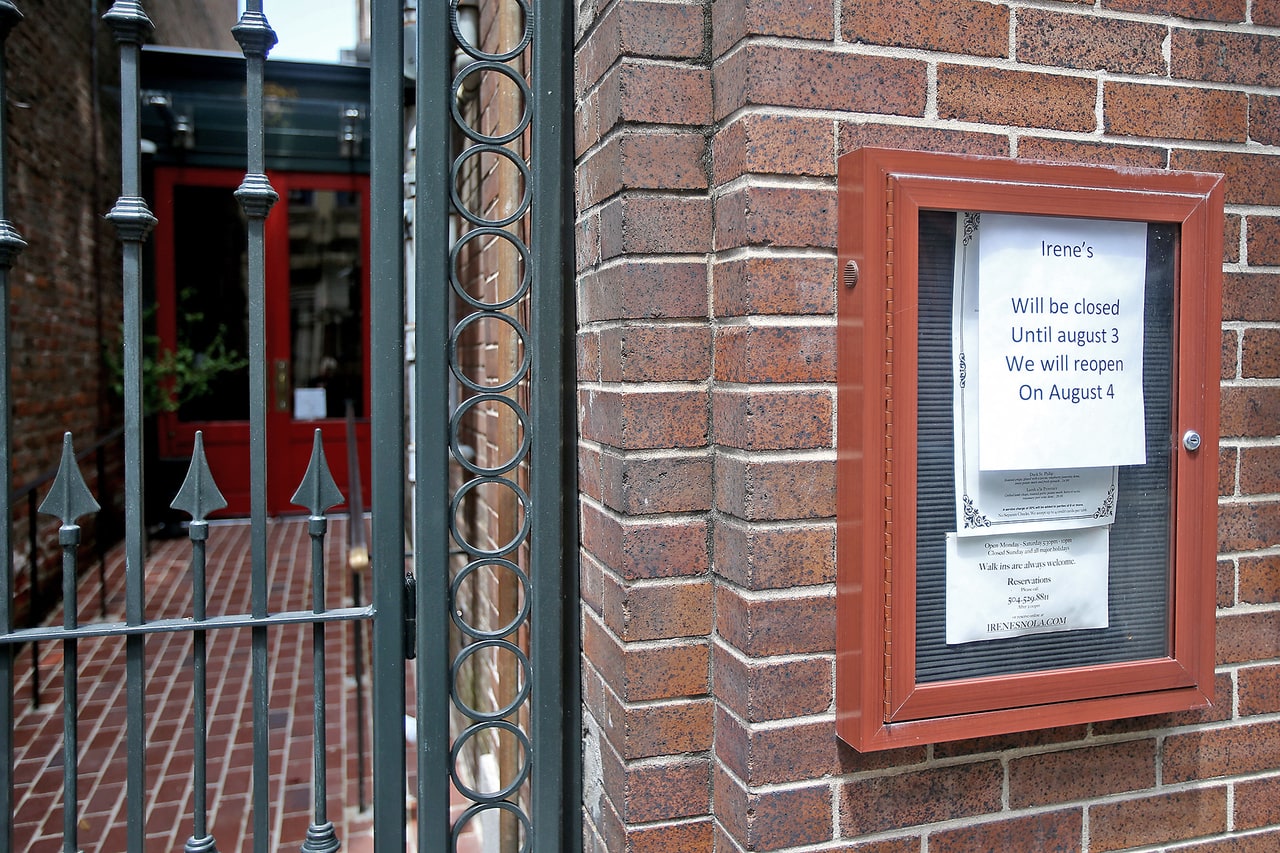 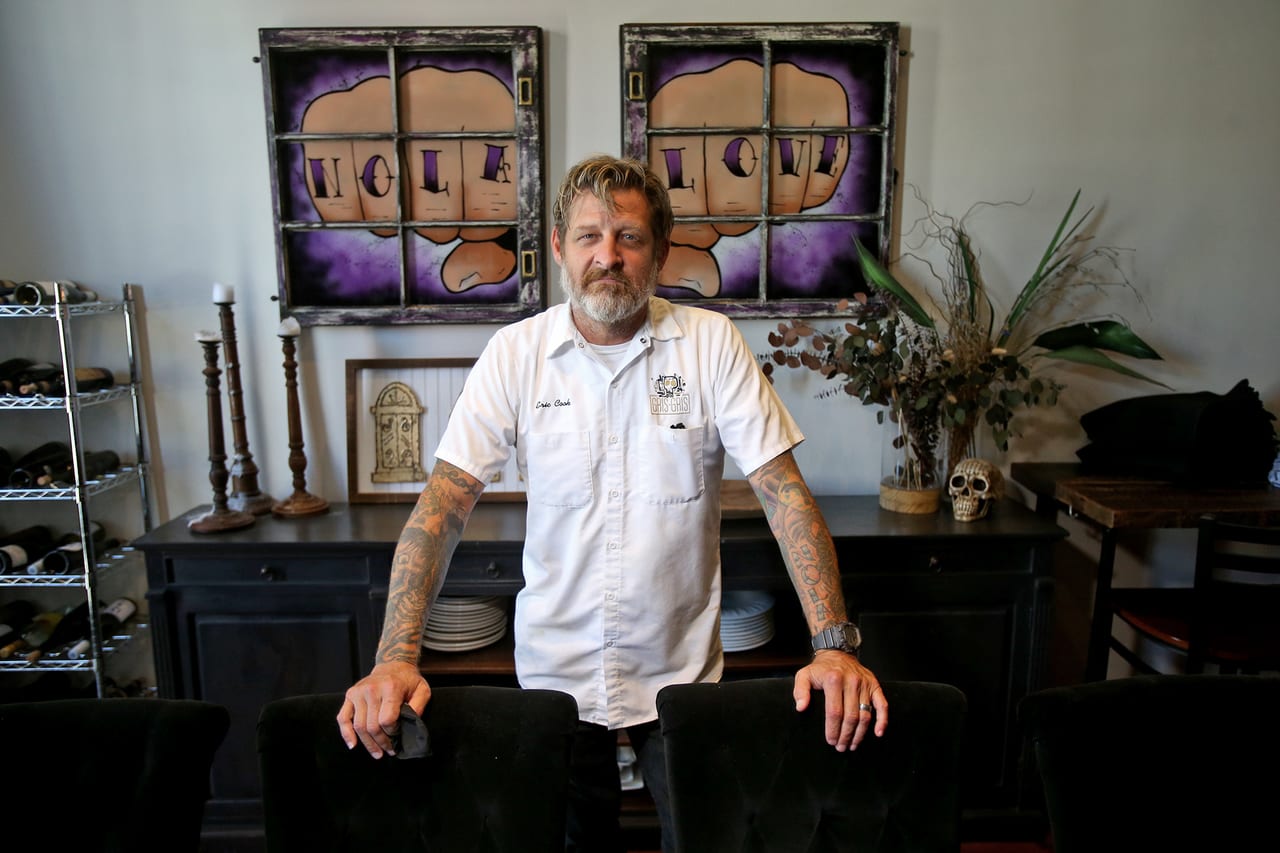 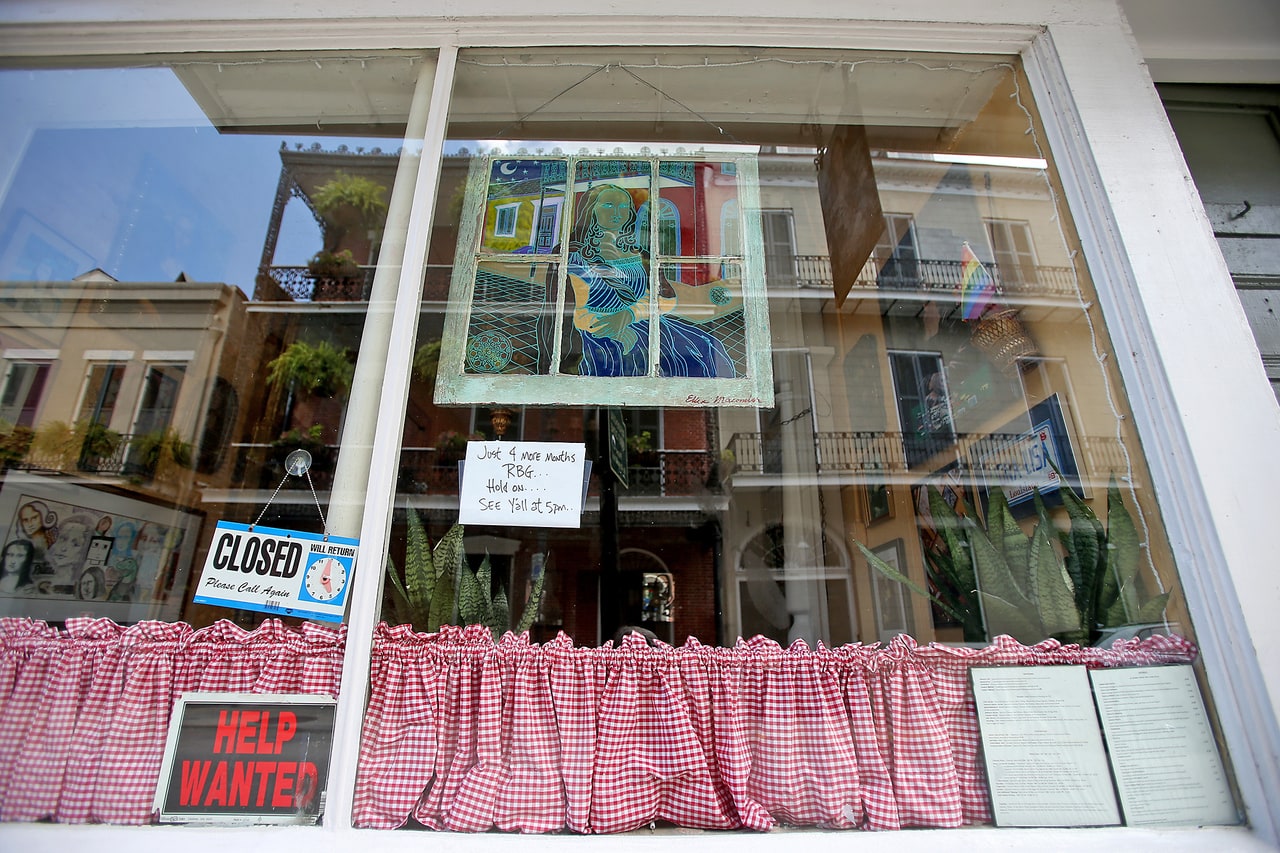 1 of 7
Customers await their turn outside Bellegarde Bakery on Apple Street which will temporarily shut down July 25th due to the financial pressures of the pandemic. Photographed on Saturday, July 18, 2020. (Photo by Michael DeMocker)