You won’t have to go far to see one of these gorgeous houses in the city.

From DIY decorating to working with local artists, here’s the story behind how these house floats are popping up from Broadmoor to Bywater.

As the Red Beans Parade banner says, this year the “People Are King,” which is evident in the pageantry exhibited across town in the form of house floats, from Broadmoor to Bywater.

The house float phenomenon sprung up as a response to carnival parades being canceled due to COVID-19, but the spirit of Mardi Gras can’t be canceled. Instead, homeowners and renters across the city have raised the bar on this year’s decorations to help keep the season festive while staying safe. 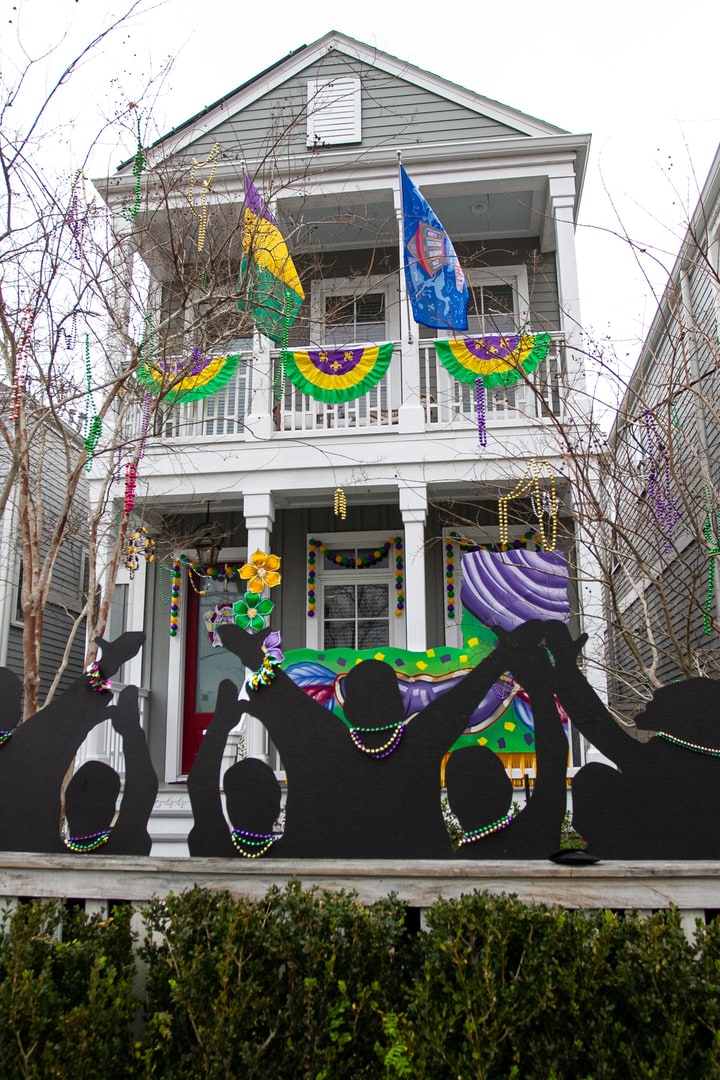 Decorating your house is like creating a costume for Mardi Gras Day. There is plenty of room for variety, from simple festive, store-bought pieces to elaborate, handmade costumes. Michelle Ingram, owner of Zeus’ Place, decided to decorate her home and her Zeus’ Place locations in exactly this spirit.

“You’re still part of a bigger thing…anything you do shows a sense of community,” she said.

Ingram spent a total of $300 on her house float, but it looks much more expensive thanks to creative touches. Mannequins dressed in old float rider costumes (Ingram rides in Orpheus) were purchased for $50 via the Nextdoor social media platform from a clothing store liquidation. The Mardi Gras ladders were borrowed from friends, which reinforces the community aspect of Carnival.

MORE: Here’s your guide (with pictures!) to explore the Krewe of House Floats

Float flowers add a distinct carnival flair and can be as elaborate or simple. Ingram fashioned hers out of poster board she nabbed on sale for 29 cents from Michaels craft store and used wire and duct tape to create a 3D effect, which “cost me a little bit of money and a lot of time.” With a little bit of spray paint, recycled political yard signs are now oversized doubloons. 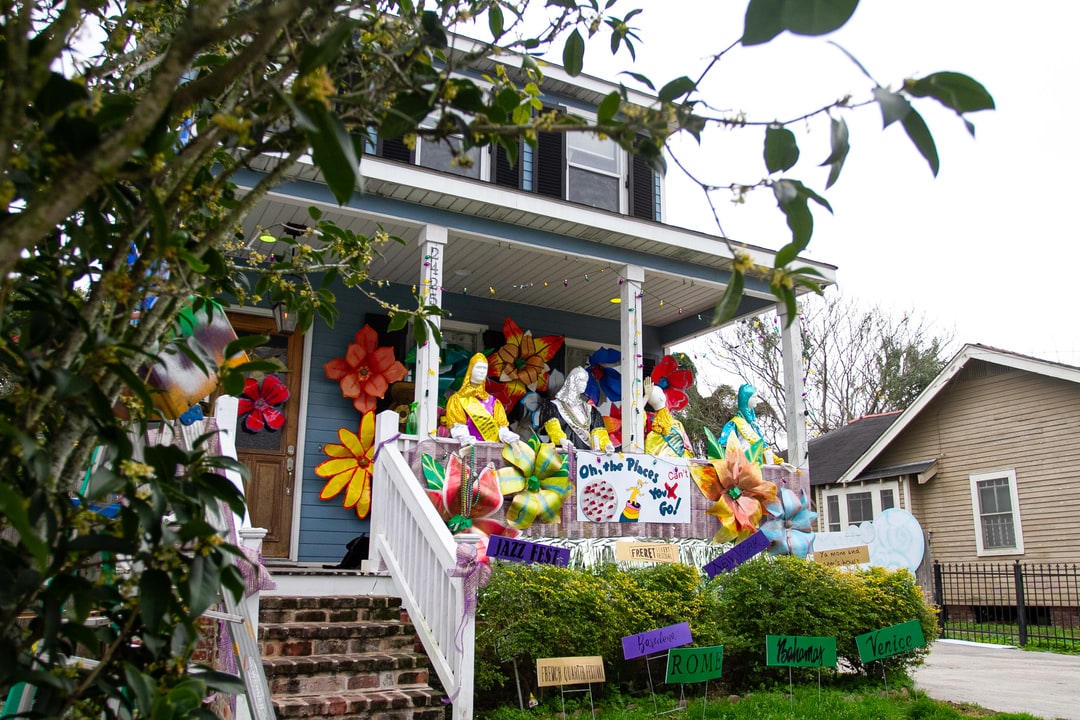 Ingram started working on her house right after New Year’s Day in one-hour increments, but she’s still looking for ways to add to her yard parade. Right now, she’s keeping her eye out for a barbecue pit to add two the all-day parade route cookout feel, and friends have offered to bring Popeye’s chicken boxes for a touch of authenticity.

Ingram said her strategy is to always buy local first. She got her zip ties and other supplies from Freret Hardware, then found other local supply chains, then bought from places like Amazon as her last resort. For those that are less DIY savvy, commissioning a float artist to design their house has been an option.

The elaborate, professionally installed house floats popping up around town are thanks to Hire A Mardi Gras Artist, an initiative founded by float designer Caroline Thomas. Known for her elaborate headdresses, which are sold everywhere from The New Orleans Costume Center in Bywater to Miette in the Lower Garden District, Thomas brought on Devin De Wulf of the Krewe of Red Beans to help.

De Wulf’s organization efforts stood out because of Feed The Frontline, a program he helped create to feed frontline workers during Covid-19, as well as Feed The Second Line, which provides meal assistance to out-of-work New Orleans culture bearers, such as musicians. Since the pandemic started, Feed The Frontline grew into the largest organization of its kind in the country. 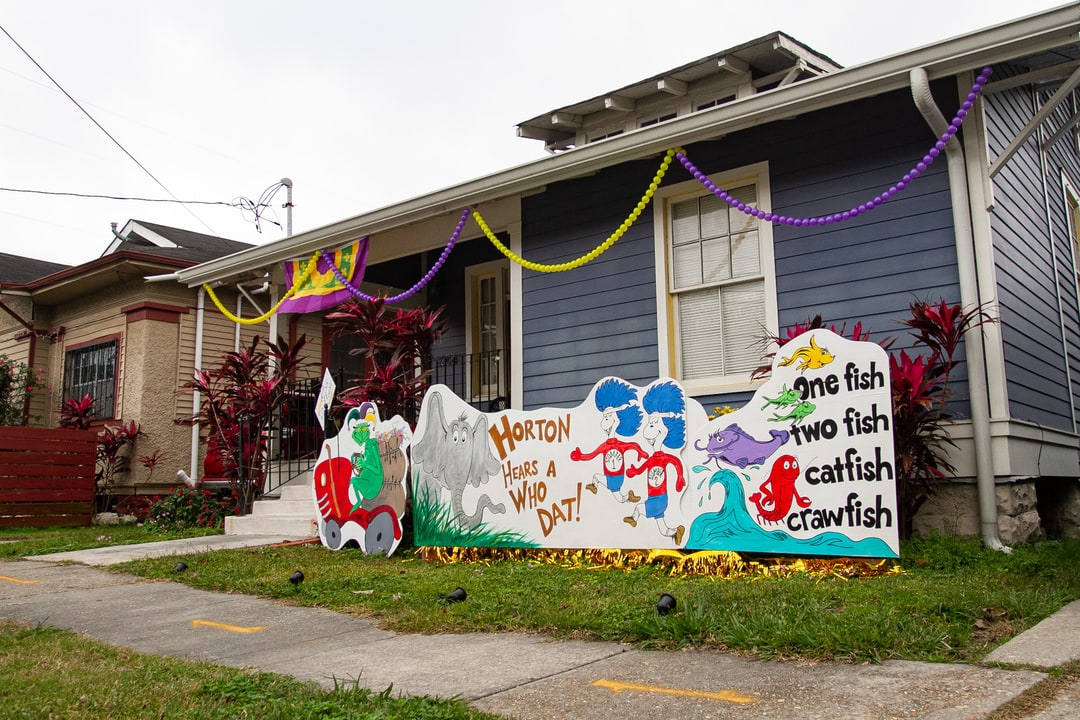 “We’re scrappy and good at assembling a team of people,” De Wulf said.

Homeowners looking for carnival magic can either commission a house float for $10,000 or enter a raffle, which is funded by donations. Once donations reach $15,000, Hire A Float Artist can decorate another house. At the time of the press, DeWulf said it’s been about 50/50, with 10 commissions and 20 fully funded houses at the time of press. Proceeds go to creating jobs for out-of-work float artists as well as musicians, who play at each house floats ribbon-cutting ceremonies.

Each house float design is individualized for the specific home. Designers and carpenters scope out the space, have a meeting with the homeowner/commissioner, then come up with a theme. Raffle participants have their names drawn out of a hat. Since it takes two weeks to build out each house float, Hire A Mardi Gras artist will stop the raffle two weeks before Fat Tuesday.

A secondary goal of the project is raising awareness of the labor that goes into the magic of carnival. Floats appear out of nowhere on parade day, and most parade attendees never get a chance to see the artists. “These artists are kind of hidden away and we don’t really think about them,” De Wulf said.

For people looking for help with smaller-scale yard decoration projects, the Krewe of House Floats website has a list of businesses and artists that are available to help, including local businesses and individual artists for hire. Magazine Street stalwarts like Miette, Home Malone, Alice and Amelia and Fleurty Girl have options ranging from king cake door wreaths to float flowers.

In the Freret neighborhood alone, 100 houses are participating in the Krewe of House Floats including residential and commercial properties. Starting Feb. 1, a city-wide map will be released to the public, which is designed to function as a driving tour. Many participants are creating specialty throws, like custom beads and face masks, but Krewe of House Float organizers stress to avoid congregating in crowds.

With the bar raised so high, decorating for holidays beyond carnival season is sure to continue. Unfortunately, float artists will most likely be out of work for two years—krewes that prepared their floats in case they’d roll in 2021 are now saving their floats for 2022.

De Wulf expressed that house floats “kind of unleashed a demand we didn’t even realize we had. Out of disaster new opportunities arise.” After the house floats come down, the artwork from Hire A Mardi Gras Artist will be featured in an exhibit at the Contemporary Arts Center in April, with pieces auctioned off for charity.

Before this Carnival season, Ingram didn’t decorate her home, but she plans on decorating more for future holidays.

“I’ve met so many more neighbors because of the decorations,” she said. “Don’t be scared that you’re going to look silly, or [your decorations will] not be good enough…This actually brings me joy, which hard to come by these days.”