Residents have ranged from a mayor to a Supreme Court justice.

Of course, the stretch of land that is now our home was discovered and first settled via the Mississippi River. But, holy moly, does that river bend and turn and weave.

That’s not so bad if you’re in a ship that’s steam-powered, or motor-powered, or whatever kind of power people use now. But if you were sailing, those bends were a massive pain in the butt. You need the wind, so you wait for it — maybe for several days — to get you going in the direction you want. You go a few miles, and then the river abruptly changes direction. So you wait, again, for the wind to change — maybe another couple of days — to go a few miles more, and so on and so forth.

Because of this, when local American Indians showed the French there was a straighter shot to the city directly from the Gulf of Mexico, via Lake Borgne, Lake Pontchartrain, and Bayou St. John, this became the preferred route.

But the route wasn’t without its challenges. Particularly, one extreme bend in the bayou, called The Devil’s Elbow, was often clogged and rendered impassable by sand and branches, causing major problems for shipping.

So in the mid-1800s, it was decided a straighter channel for the bayou would be excavated. The plan was tabled during the Civil War and completed after. The soil from the dredging was heaped onto the land between the bayou’s original path to the east and its new path to the west. That island — above sea level, thanks to the added soil — towers (relatively speaking) above its surrounding neighborhoods.

The soon-to-be island was gifted by the Milne Asylum for Destitute Orphan Girls, it seems, to surveyor Jules Alou d’Hemecourt (of Mid-City’s d’Hemecourt Street fame) in 1859 to thank him for his work in creating a plan for its development. In 1866, Isle d’Hemecourt, as it was originally called, was sold to James Joseph Demourelle, which explains why it’s often referred to today as Demourelle Island.

The island stayed in Demourelle’s family until 1905, and for the next few decades, it was used as a hunting ground, a dairy farm, a small shipyard, a recreational boathouse, an (unofficial) home for squatters and even a city dump.

A man named Sylvain Vincent Dedebant owned the island for a portion of the second decade of the 1900s, and lost it in a lawsuit in 1916. That probably isn’t even worth mentioning, except there was a spirited debate in the 1970s over whether the island was originally called “Demourelle Island” or “Dedebant Island” (those of you reading this now know it was originally called “Isle d’Hemecourt,” though “Demourelle Island” is far more common today), and Mr. Dedebant, apparently a milkman, was also in the news in the early 20th century for pulling out a concealed firearm and pointing it at another citizen while delivering his dairy.

In 1952, Demoruelle Island was briefly owned by a law firm of five partners who considered dividing the island into five huge plots on which they would each build a house. Instead, they sold it to a corporate buyer, Park Island Incorporated, which was chartered in 1953 to build 28 lots (all but four on the water), each of which would be sold for $18,000.

One of Park Island Inc.’s officers was Joseph Schiro, a Sicilian from the town of Contessa Entellina — a community with a unique Albanian heritage, and one that sent many of its citizens to New Orleans. Schiro began his New Orleans career operating grocery stores, but eventually prospered in real estate, developing the Jefferson Parish community, Schiro Park.

The first home was built on the island in 1957 and the last was built in 1973. But the fact that the island — now most often called “Park Island” after Schiro’s corporation that developed it — sits on Bayou St. John isn’t its only charm. It’s also the style of the homes that occupy it.

A new neighborhood required a new look, so community members turned to architects to design their homes in innovative ways representative of the time. It just so happened that a popular architectural style of the time was known as mid-century modern, and that’s the style the architects called upon preferred.

Mid-century modern — most famously championed by Frank Lloyd Wright — prioritizes the buyer, allowing the architect to build a home that is personal and unique to the future homeowner. This is in contrast to another popular style of the time, the international style, which provides design solutions that are said to be indifferent to location, site and climate.

A home designed in the international style works anywhere, but to critics, that’s its weakness. There’s no reference to local history, vernacular or an individual’s tastes. Wright said, “Human houses should not be like boxes, blazing in the sun.”

The houses on Park Island are nothing like boxes. I saw that for myself. Hours after an afternoon rainstorm, I jogged onto the island via a bridge connecting its eastern end to St. Bernard Avenue. I slowed to a walk on Park Island Drive — the island’s lone road — and the neighborhood, lined by palms and covered by the arms of massive oak trees, emitted the sweet scent that often follows a storm.

No two houses were the same — or even similar — and in a city whose architecture is defined by shotgun homes and St. Charles Avenue mansions, these homes were unrecognizable. Some roofs are pitched so shallow, I don’t understand how they aren’t collecting water. Others are so steep, shelter for a pet giraffe is the only functionality I can think up.

The homes are so modern-looking compared to what I’m used to seeing in this city, it feels like the island is from the future, or a fairy tale. One home has white siding in the shape of a pentagon, and ornate garage doors underneath three individual balconies, small enough for only one person on each. I imagine three Goldilocks debating who the prince should save first.

Down the street is a wide, one-story home made of brick, with what appears to be a watchtower rising from the roof. The brick tower is large enough for 10 windows, four protruding from each of its two longer sides, giving what I imagine are beautiful views of both the island and the bayou. 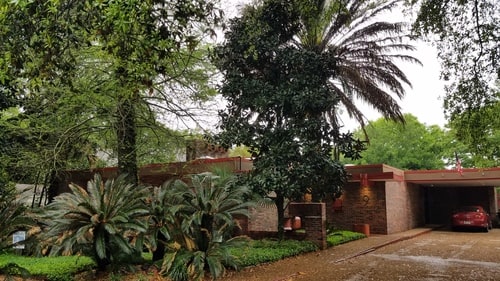 The front lawns of the homes are equally diverse, some with the light green of well-manicured grass and others featuring a cover of darker green plants so thick, it makes the soil below it invisible.

Though that’s not to say the island is free from eyesores. The occasional overgrown lot, with vines climbing sporadically up the side of a home, tips off to the challenges of home ownership in a tropical environment. And the occasional crack on the island’s one road — or a manhole cover protruding slightly from the street like a birthmark off skin — remind us of the hazards of a civilization built on an alluvial delta that is constantly shifting.

Albert Ledner and his Ashtray House

The Ashtray House is the most famous house on the island, designed by the late architect, Albert Ledner, who studied with Wright after serving during World War II. By 1951, he was back in New Orleans, where his family grew up (his mother, Beulah Ledner, actually invented doberge cake, but that’s a story for another day).

He was most famous for a series of commercial buildings he designed for the National Maritime Union (including its headquarters in New York City and an office building in New Orleans at 2731 Tchoupitoulas Street), as well as a series of residences here in NOLA. His creations have very few right angles, and instead feature free-flowing interiors. The focus is less on individual rooms, and more on the buildings — inside and out — as a whole.

And, as is common in mid-century modern homes, the building is customized with the customer in mind. That explains why his buildings in New York City feature sewer covers and, with a maritime union in mind, evoke a nautical feel by featuring porthole windows.

Found another Albert Ledner project today wandering through Chelsea. Originally built in the 60’s, a recent overhaul by Handel Architects added three times as many of these porthole style windows.

Here on Park Island, two of the homes were designed by him. The Ashtray House uses 1,200 ashtrays affixed to the stucco along the outside of the house, recalling the original owners’ passion for smoking. The long home, later owned by former Mayor Ray Nagin, runs into a room with multi-story glass windows that reflect the image of several of the houses across the street. 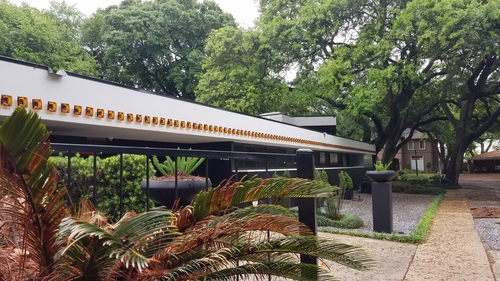 Ledner’s other home, built in the mid-1960s, is called The Galatoire House and incorporates historical elements collected by the client, Leonie Galatoire, such as a curvilinear curtain of windows (installed, both, upside down and right side up) salvaged from an 1866 convent. John P. Klingman, a professor of architecture at Tulane University, told the New York Times that Ledner “was one of the first people, not just in New Orleans but around the country, to incorporate historic elements in such unusual ways in a modern project.”

“There are many places I like, but i like New Orleans better” ❤️ Bob Dylan .. Stop#8 #neworleans #Albertlender #lakeshore #galatoirehouse #ternstreet #funnyencounters Photos 1 (galatiore house)&3 (25 teen street) from past archives.

I admired the homes, creations of an influential New Orleanian I had read so much about (he only passed away in late 2017), and then made my way around the remainder of the island’s road, and toward the bridge that would take me off the island and back to the rest of New Orleans.

It was easy to feel like you were in a place far away from our city. Homes that looked nothing like ours, a quiet and calm that New Orleans isn’t known for and a wealth that isn’t even approached by any but one or two other neighborhoods. Where was I?

The last house I saw on the island reminded me: a one-story brick house, with a pitched roof that slopes, at least mostly as you’d expect a roof to slope, a simple white garage, with simple white gutters, and simple windows with simple white trim. A Katrina X still visible on the front of the home.

It was a reminder that not even an island, to borrow John Donne’s words, “is an island entire of itself.”

It’s the diversity of our city and our country that allows for an island, that was designed by a Frenchman before the Civil War and developed by a Sicilian-Albanian after World War II, to be occupied by teachers and lawyers; a mayor and a Supreme Court justice; and citizens with roots from as far away as Iran, Pakistan and Japan.