From Social Aid and Pleasure Clubs, to the Babydolls and Black Masking Indians, everything presented here is authentically New Orleans.

Walking into the unassuming building that houses the Backstreet Cultural Museum, you can immediately tell that you’re in a place of importance. From the moment you enter, photographs and memorabilia adorn the walls, telling stories about New Orleans culture that, while acknowledged, is rarely appreciated by those on the outside looking in.

Before the doors of the museum opened in 1999, Gentlemen of Leisure Social Aid & Pleasure Club member, Sylvester Francis, had spent three decades documenting Carnival celebrations, second-line parades and jazz funerals throughout New Orleans. From there, Francis became a culture bearer who collected Mardi Gras Indian costumes, photographs, and parade umbrellas, which he displayed in the garage of his Tremé home.

As word got out about Francis’ fledgling museum, pleasure club members began donating costumes and other artifacts to be added to the collection. Francis’ friend, Joan Brown Rhodes of Rhodes Funeral Home, suggested that Francis move the museum into the space that once housed Blandin Undertaking Company in the St. Claude neighborhood. The building, located at 1116 Henriette Delille St., is where the museum resides today. 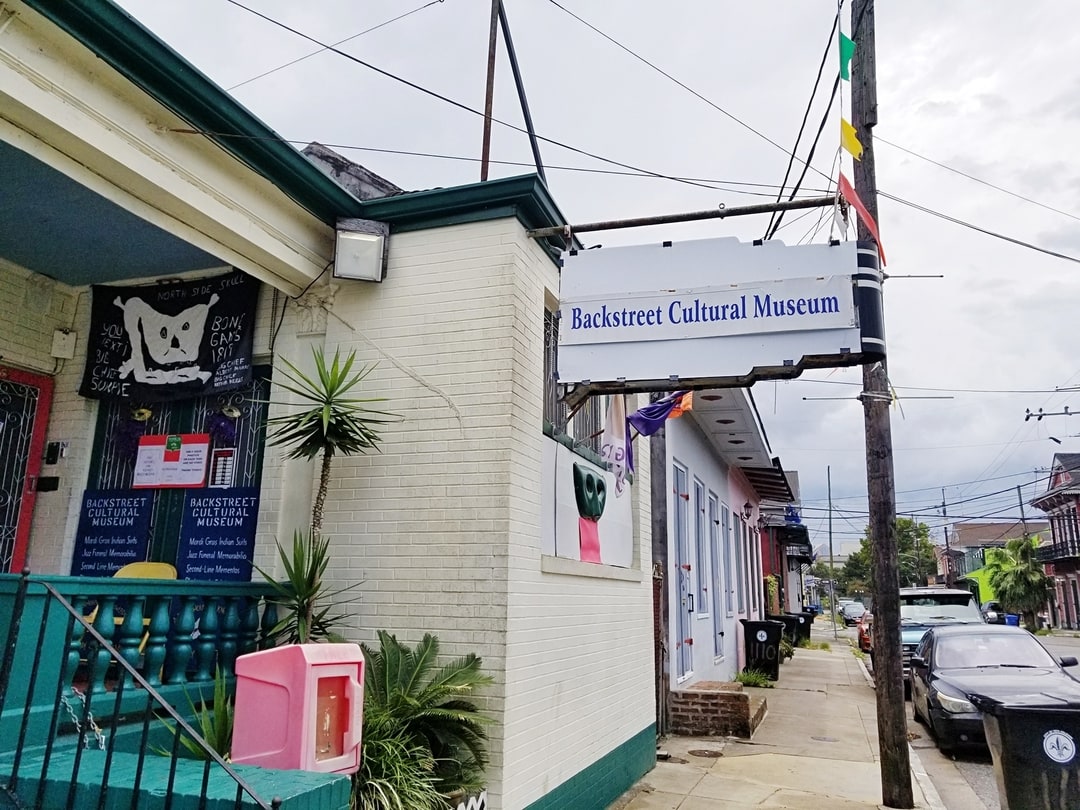 Once the museum was incorporated as a nonprofit, items were regularly accepted for display. The museum now holds an extensive collection of African American community-based traditions such as the Black Masking Indians (or Mardi Gras Indians), jazz funerals, social aid and pleasure clubs, Baby Dolls, and Skull and Bone gangs.

The mission of the museum is to preserve and perpetuate the unique cultures and traditions of the New Orleans African American society through collections, publications, exhibitions, programs and performances. The museum recognizes that the preservation of culture is a part of community development and presenting these exhibitions is a way of strengthening traditions and enhancing economic prosperity in the community.

In addition to the permanent collection, the Backstreet Cultural Museum regularly provides exhibitions at the New Orleans Jazz and Heritage Festival and Essence Festival. Pieces of collections from the museum have also been featured at the Ogden Museum as well as the New Orleans Museum of Art. 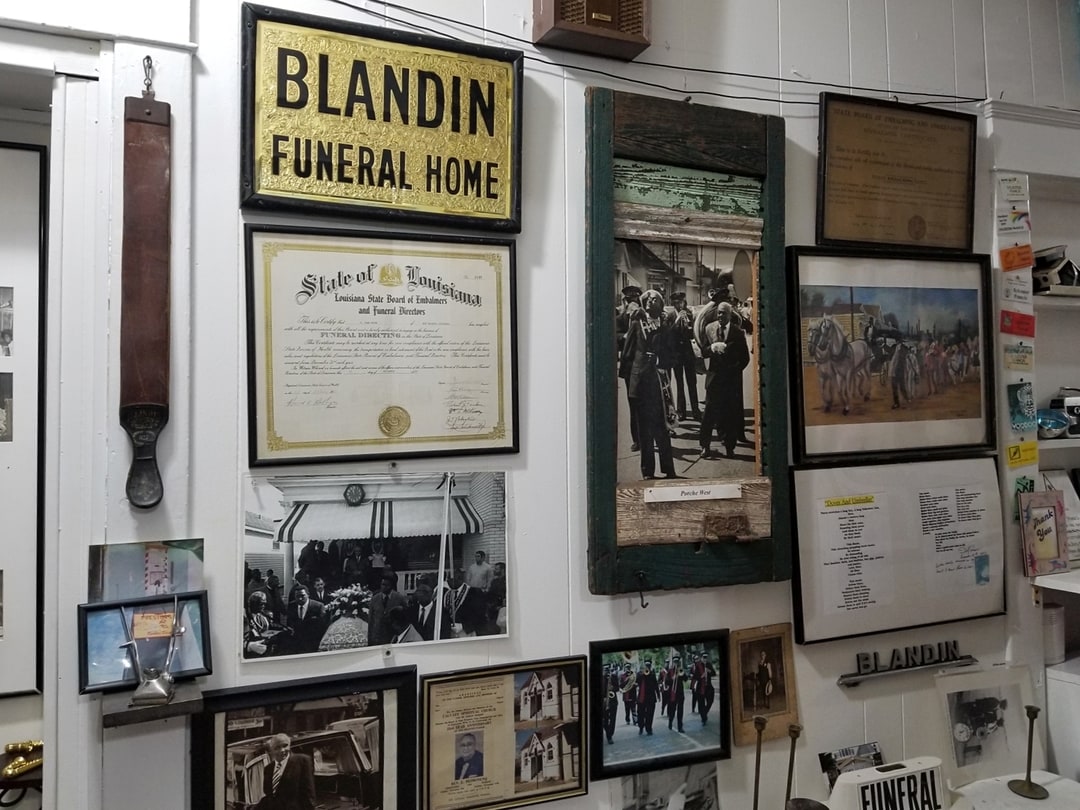 The collection at the Backstreet Cultural Museum is extensive, and being in the same room as so many important pieces of New Orleans history is somewhat overwhelming. Francis first began his documentation of African American parading cultures through photography and film in the late ‘70s. These films contain images of jazz funerals, parades, New Orleans’ African American Carnival celebrations, Mardi Gras Indian public performances, and the second-line parades of social aid and pleasure clubs. The museum has filmed records of over 500 documented cultural traditions and these films are available to the public for viewing. 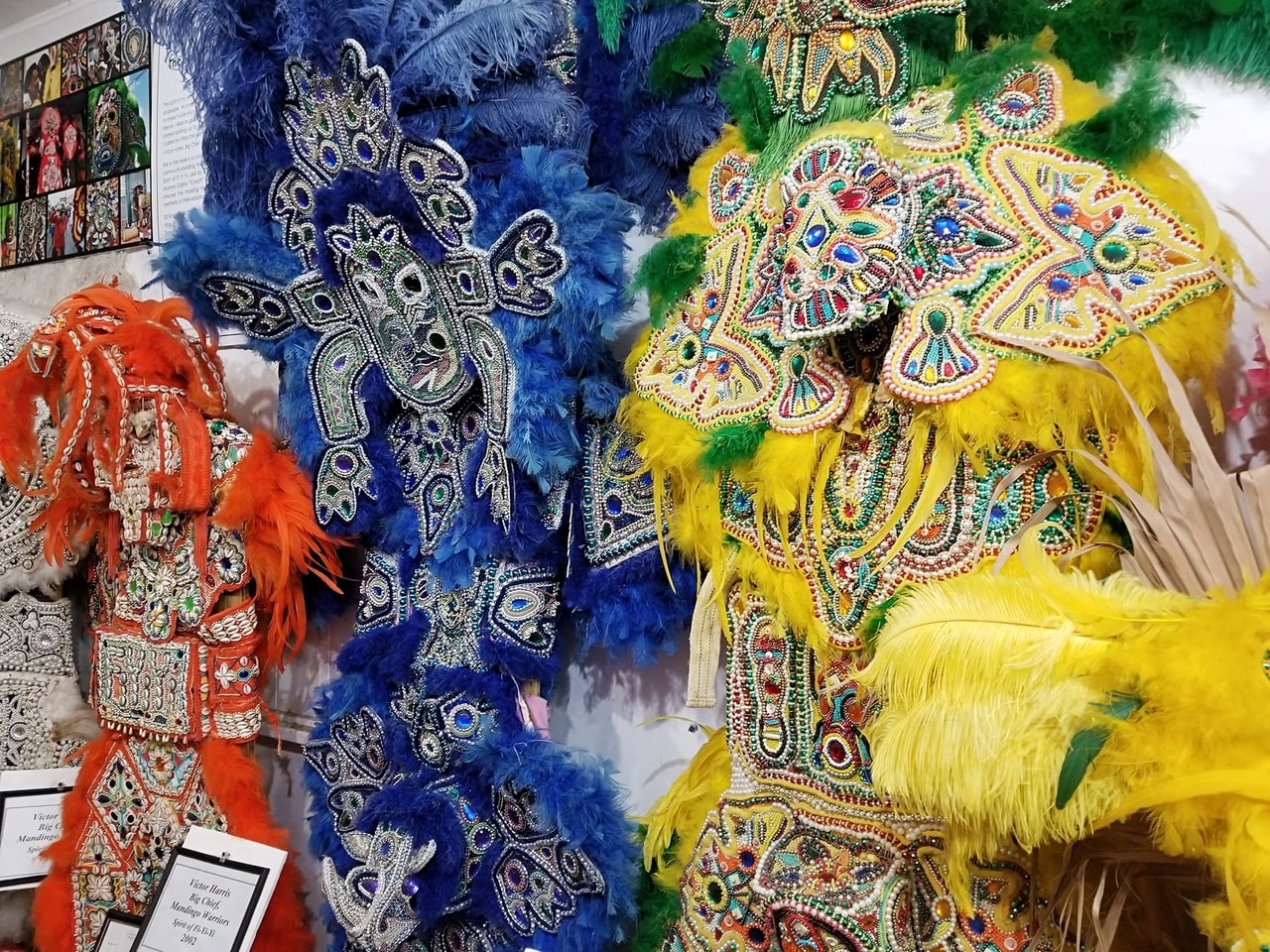 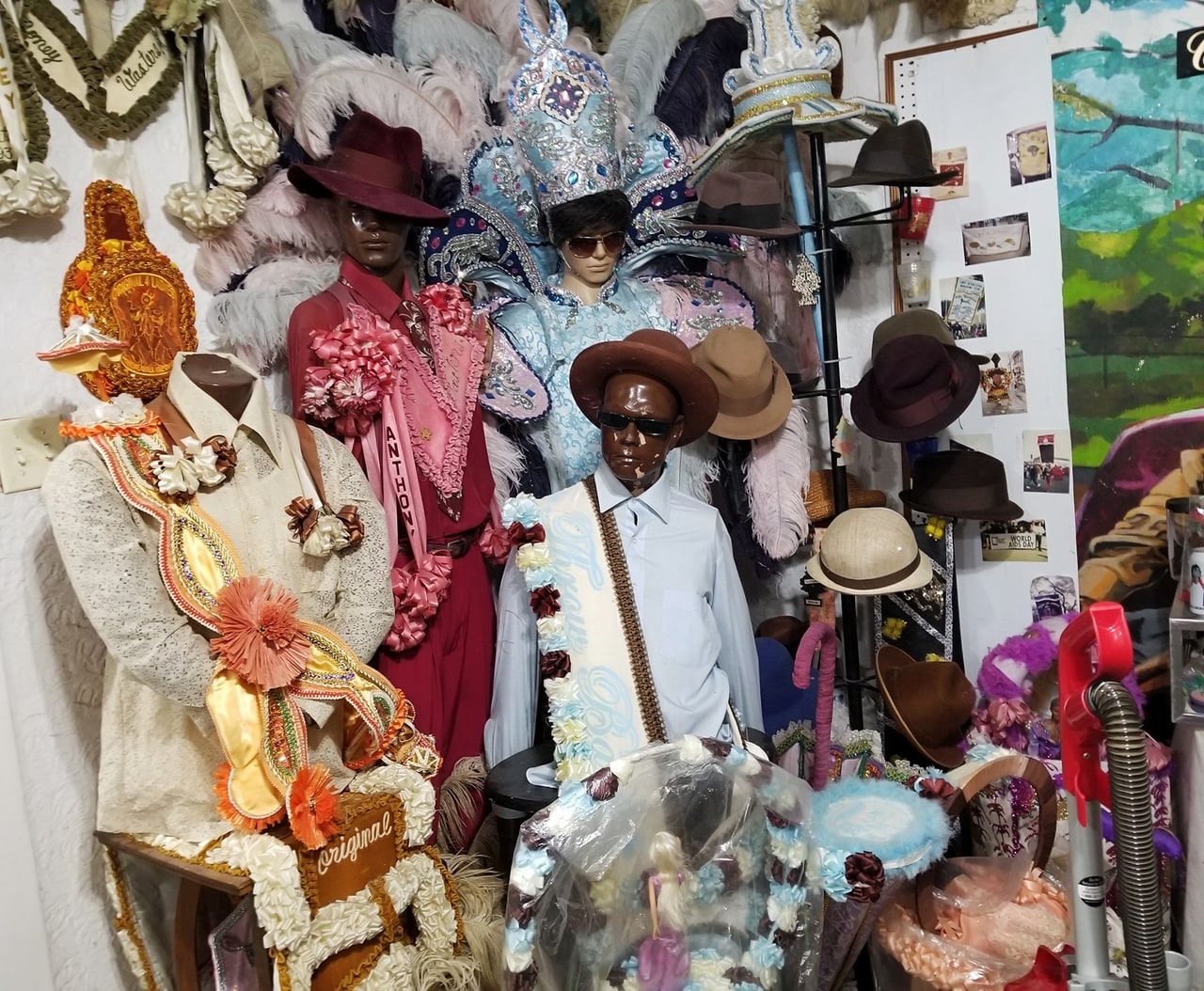 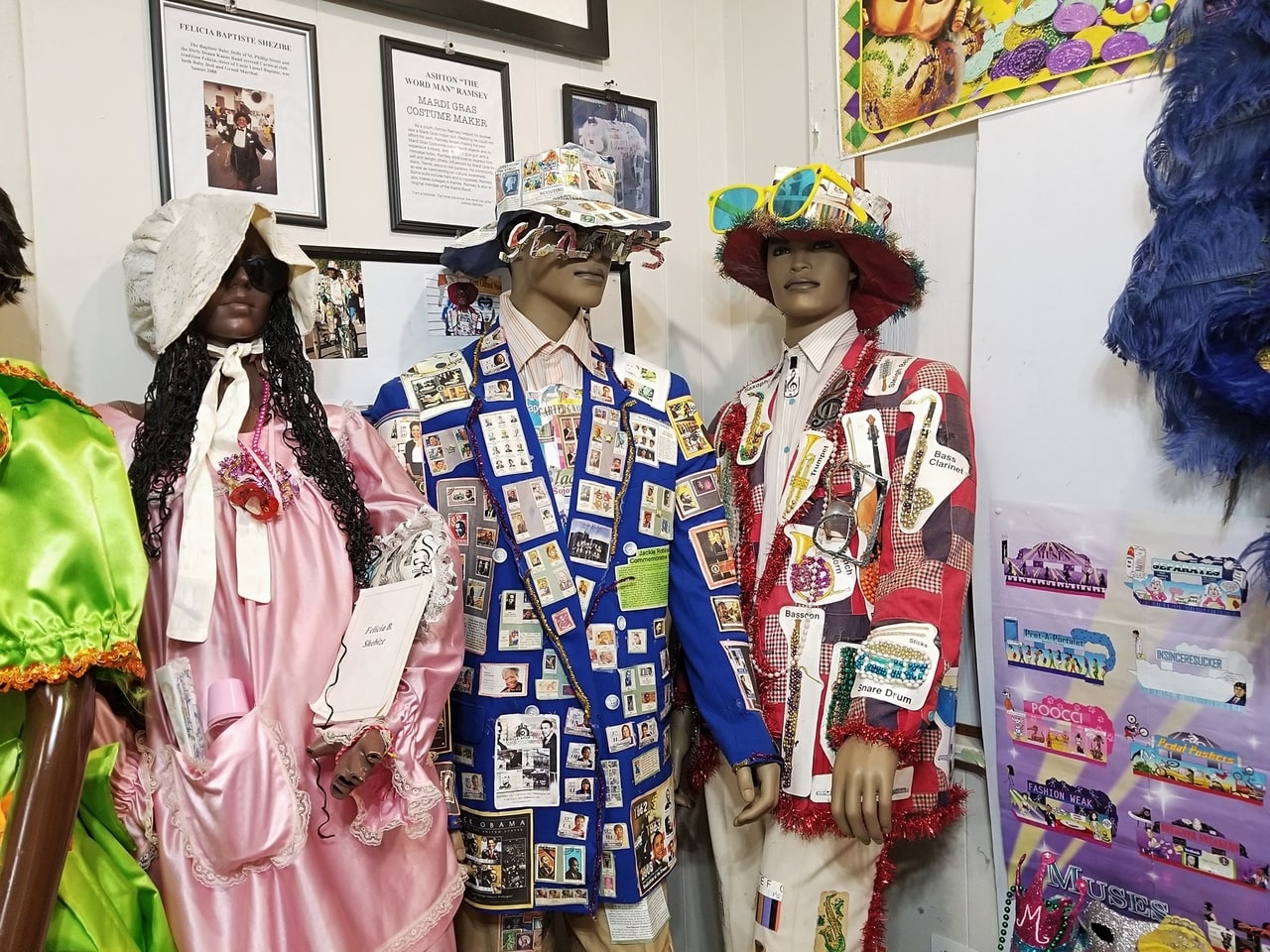 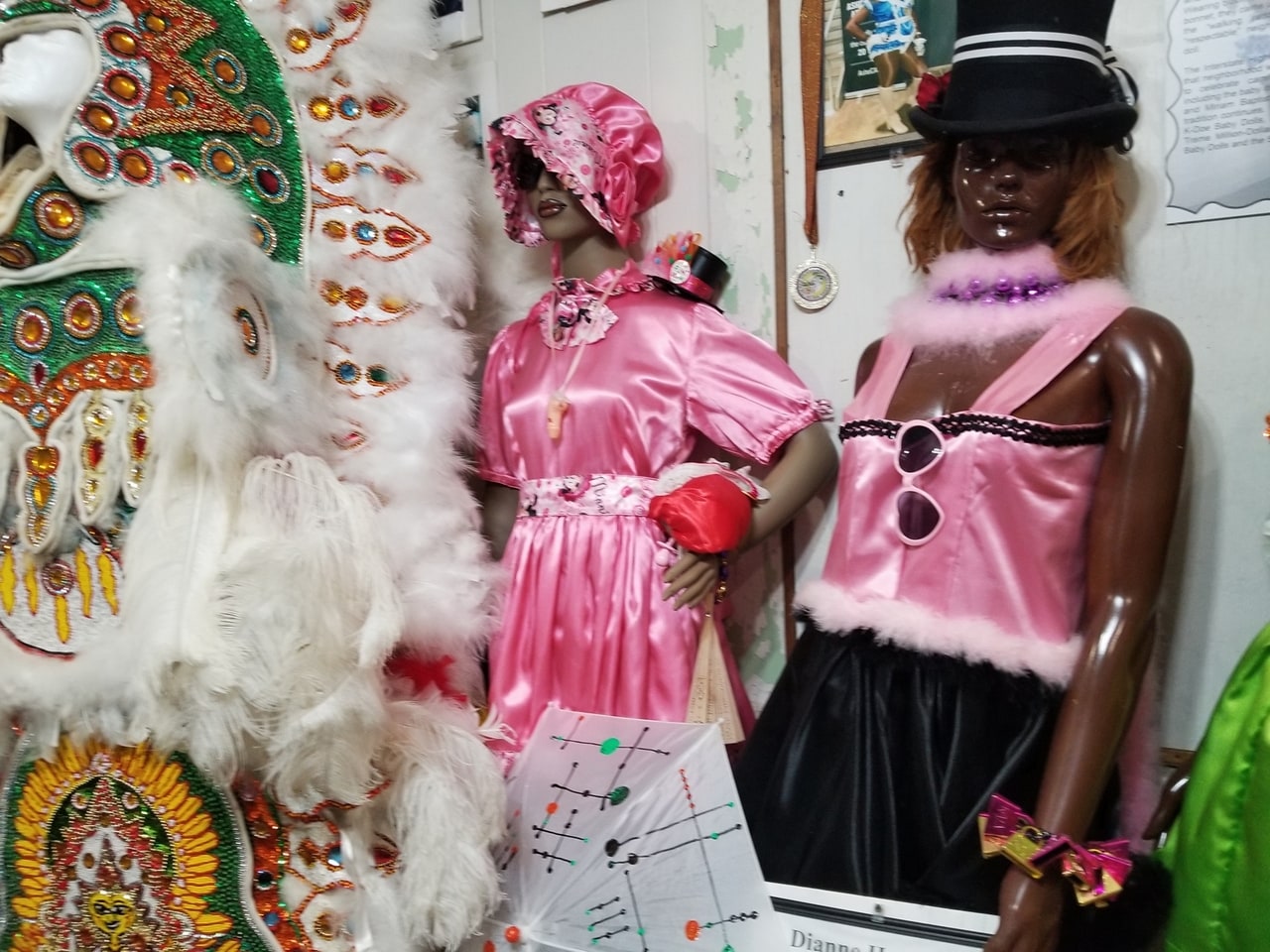 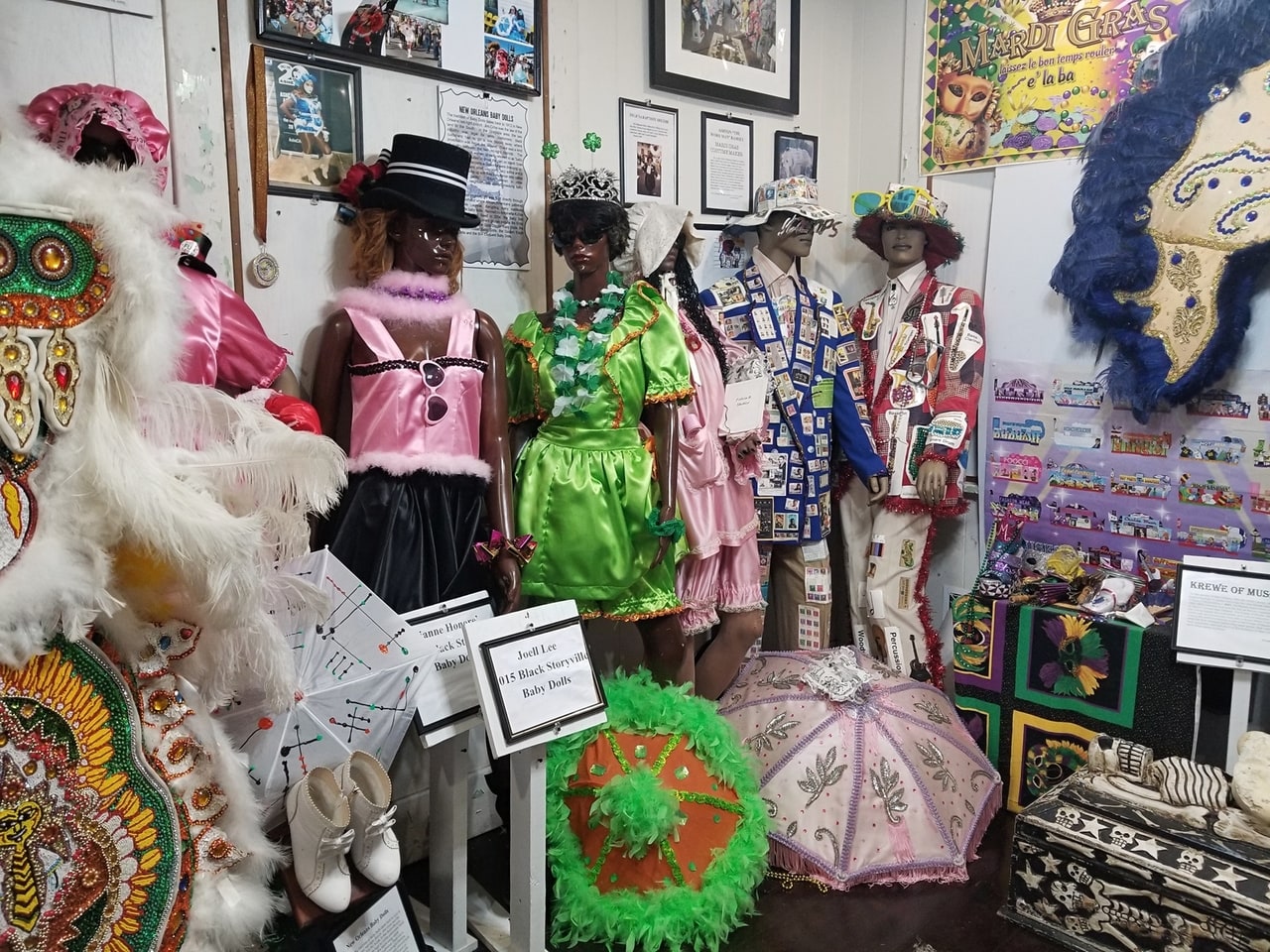 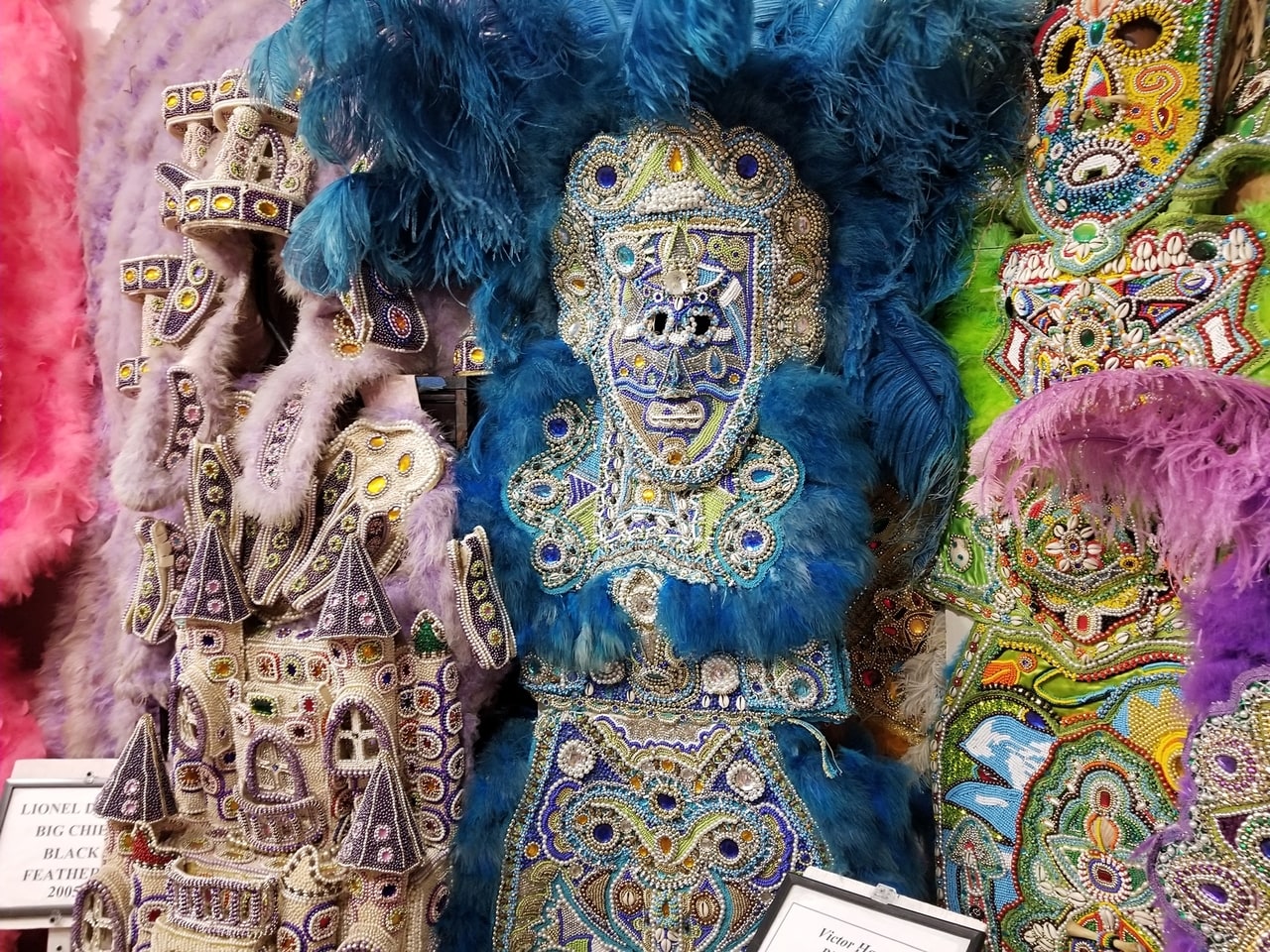 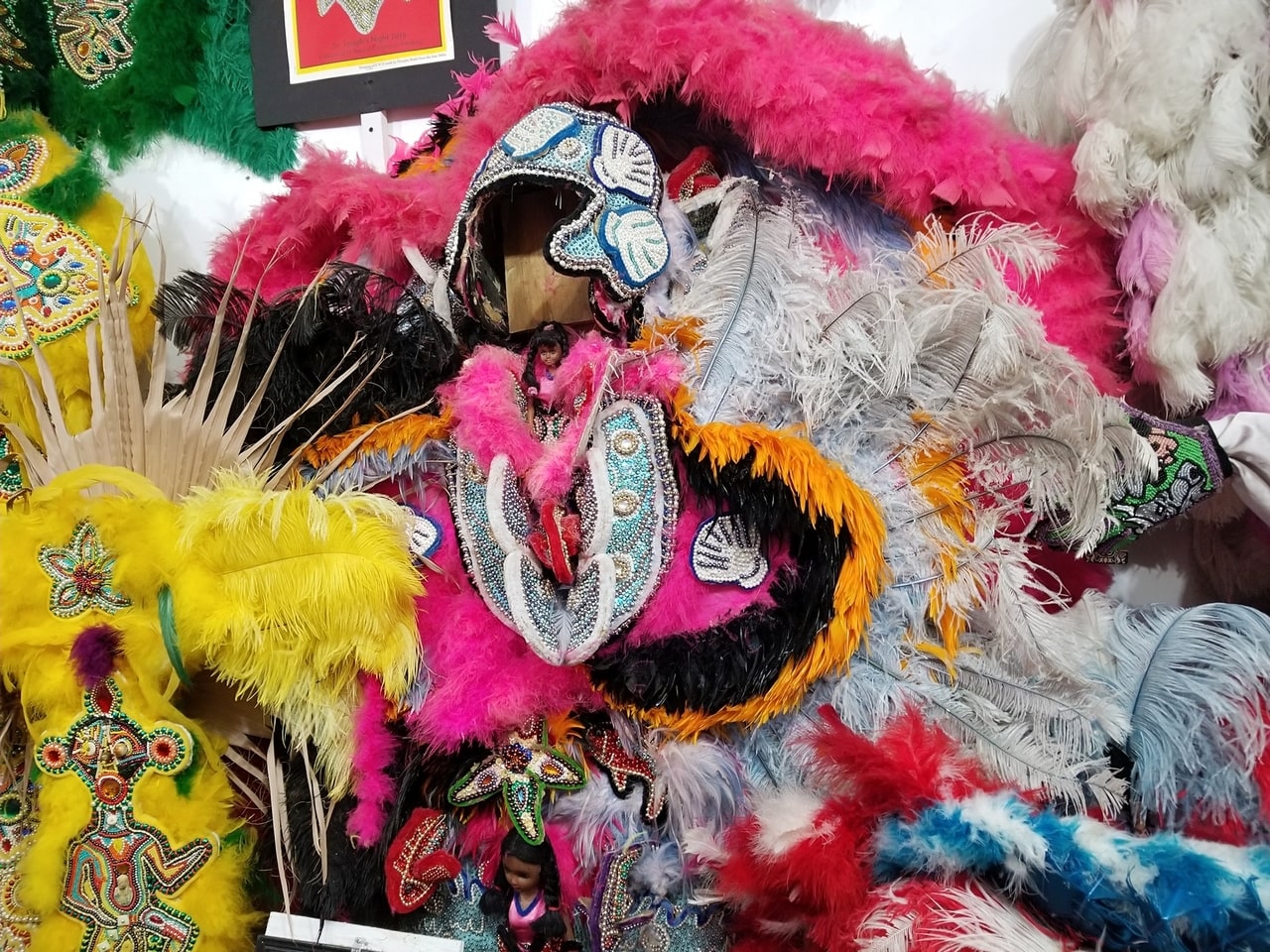 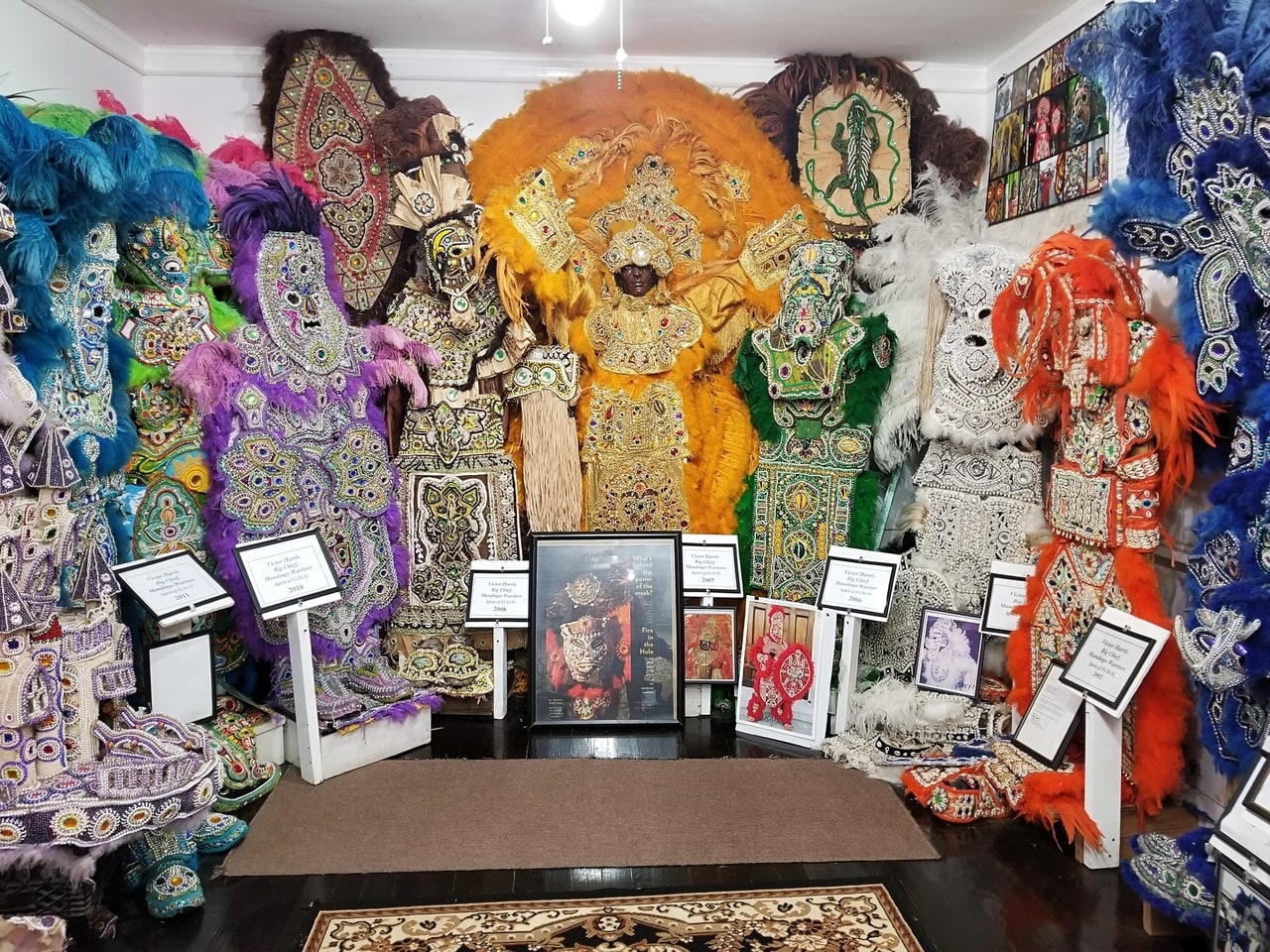 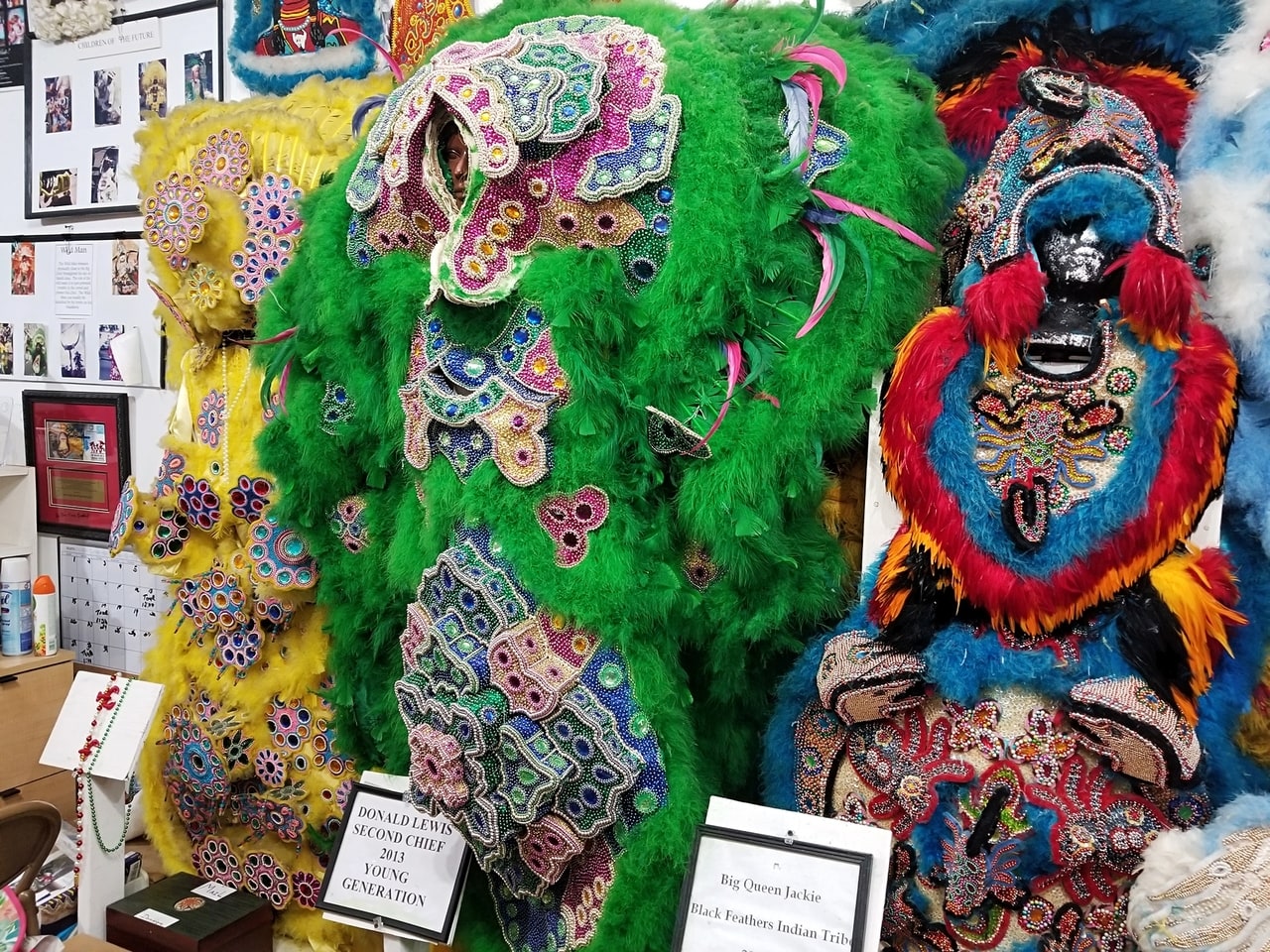 The Mardi Gras Indians regalia is some of the most impressive at the museum. Viewed up close, you can see the detail and the delicate work that goes into these beautiful pieces. Suits of Big Chiefs, Queens, Flag Boys, Wild Men, and more are on display. At the exhibit, you learn about the history of the Mardi Gras Indians and how Native Americans cared for slaves that were fleeing the violence of plantations. Dressing in these elaborate feathered and beaded suits is how they honor Native Americans and thank them for their protection.

The suits on display take a year to sew and construct by hand and are worn only three official times during the Carnival season: Mardi Gras Day, Super Sunday and St. Joseph’s Day. The suits are never worn for more than one season, and a new one is designed and sewn every year. These elaborate costumes can take 6 to 9 months and thousands of dollars to construct.

Another group’s costumes displayed at the museum is that of The North Side Skull and Bone Gang. This group is one of the oldest African American processional traditions of New Orleans. The job of the Skull and Bone gang is to bless Carnival by evoking the spirits to ward off sickness and injury, so there can be a safe celebration. The Gang takes to the streets early on Mardi Gras morning wearing skeleton suits and carrying animal bones. Their singing and chanting wakes the neighborhoods and alerts people that Mardi Gras day has arrived.

The legendary Baby Dolls have been a part of Mardi Gras culture since 1912, when African American prostitutes took to the streets on Mardi Gras day and costumed, to compete with their white counterparts. They dressed in baby doll dresses complete with satin skirts, bloomers and garters. They added walking sticks, cigars and money to their look as a way to symbolize taking the power back from the men who often visited them. They made their statement through dancing and singing in the streets. The tradition carried on until the ‘50s and was revived in 2004, and the Baby Dolls now march in several Mardi Gras parades, including Zulu. Today’s Baby Doll costumes are a nod to the ladies who originated the group. 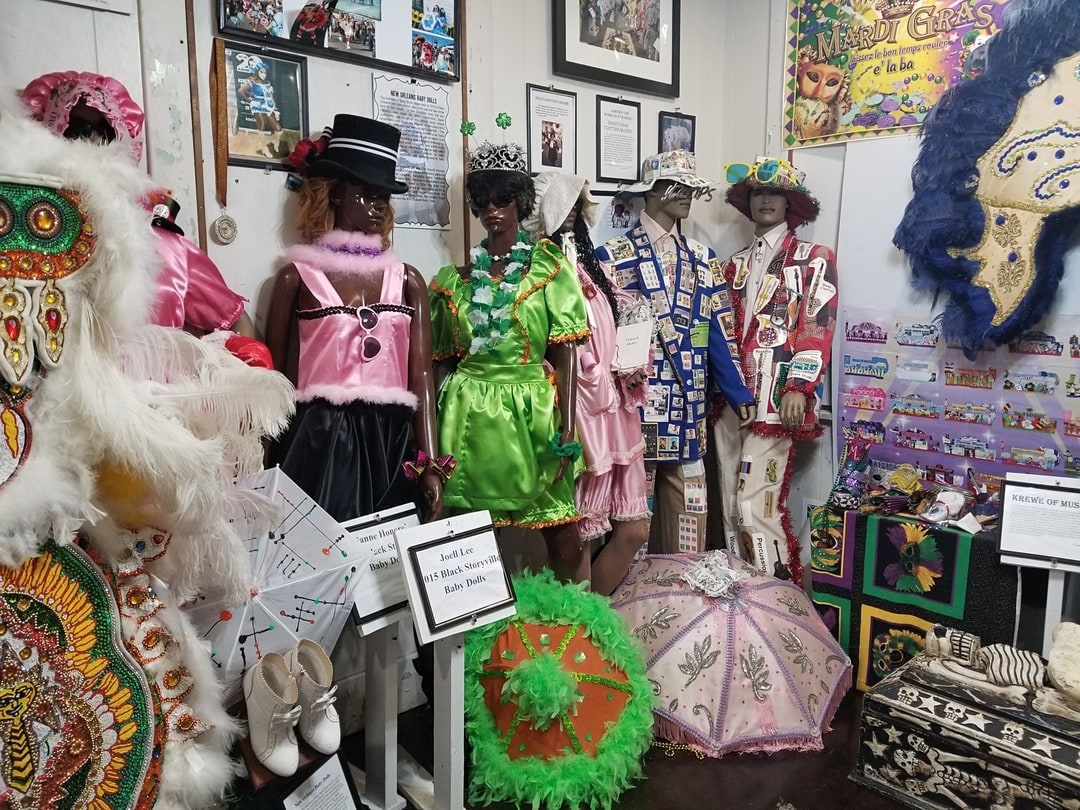 Jazz funerals are a tradition deeply rooted in the New Orleans African American community. The Backstreet Cultural Museum features a collection of films and videos, photographs, obituary records, and memorabilia from jazz funerals in New Orleans of the last thirty years.

Jazz funerals date back to the beginning of the 20th century; the ritual is meant to sustain the community and form a connection with the ancestors. The tradition blends European and African cultural influences and combines with spiritual practices of Nigeria and other parts of West Africa. They are also heavily influenced by the practices of African American Protestant and Catholic traditions. During the first part of the jazz funeral, the casket is led to the cemetery to slow hymns played by a brass band.  After the burial, the band plays more upbeat, celebratory music; followers dance, and the second-line parade begins. The idea is to celebrate death and please the spirits- in turn they will protect the dead.

On Mardi Gras day, Backstreet Cultural Museum is the place to be. It’s where Mardi Gras Indians gather to show off their new suits and where the North Side Skull and Bone gang, Baby Dolls, musicians and revelers gather to start their day.

For $10, Mr. Francis, or his daughter Dominique, will take you on a guided tour throughout the museum and give you a history of the collection and the groups represented here. Every corner of the building is packed with memorabilia and history.

The Backstreet Cultural Museum is a must-visit for any local who is interested in learning more about African American club culture and what makes Mardi Gras traditions so special. It’s thanks to Mr. Francis’ hard work that these treasures are preserved for generations to come. 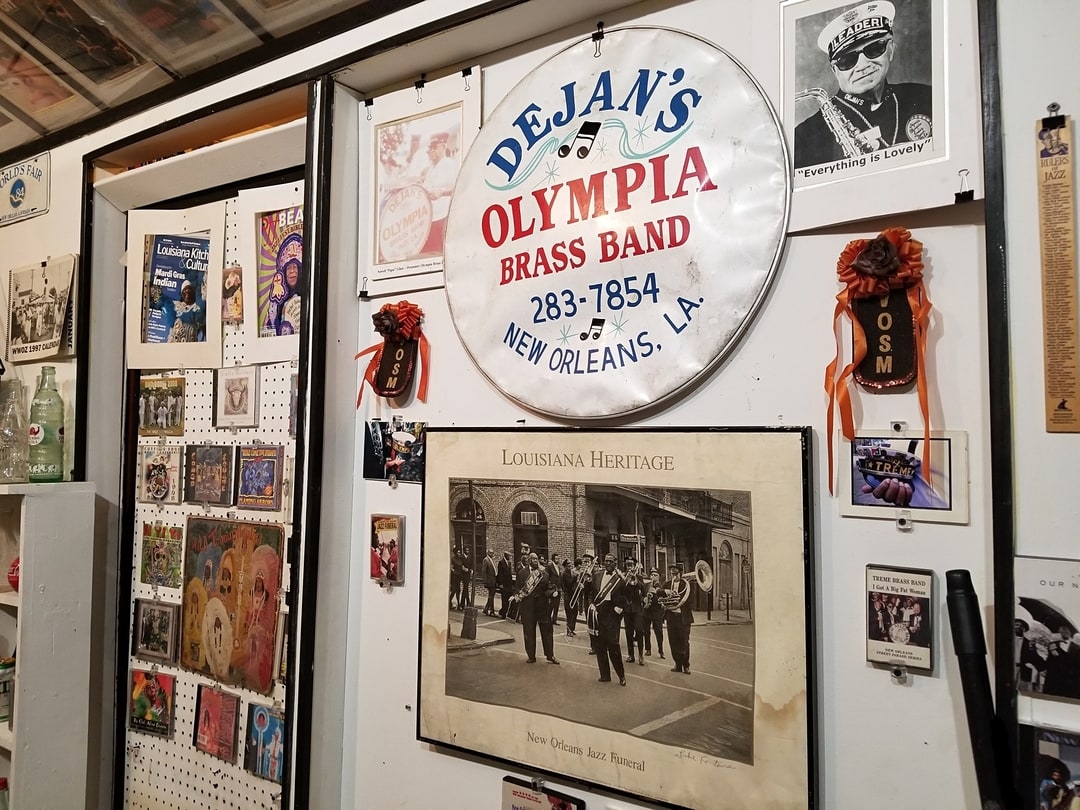