Brandi Charlot is matter of fact when she talks about her successes. Carol’s Daughter, Dillard University, Ciara, Diana Ross, Jazz Fest; these are just some of the clients she has cultivated since opening her business, Blucid Floral (pronounced Be Lucid), in 2015.

For Charlot, however, there is no surprise at the rapid growth of her business, and no false humility. Instead she emanates the quiet confidence of someone who has a clear vision and a strong faith: in herself, God and the community in which she grew up.

“I pretty much can do anything, but you have to really love it,” Charlot said, and you can’t help but believe her.

Charlot is a born and raised New Orleanian, a product of the Lower 9th Ward. She was 18 with two young sons, when her family lost everything in Hurricane Katrina. Their house, their possessions and the only community she had ever known, washed away when the levees broke. What never broke was her spirit.

“I was a teenage mother and I still walked across the stage with a baby,” she said. “I still completed college twice. I didn’t have any excuses.”

She began rebuilding her life and community in tandem. For eight years, post-Katrina, she taught math intervention at Martin Luther King, Jr. school, changing the trajectory of young lives. During that time, she also worked in the world of event planning, and even thought about becoming an event planner, which led her to floral design. And it was close to home that her vision would take root.

“How did I start? On the porch,” Charlot laughed, describing the genesis of Blucid Floral. “Taking pictures of flowers — posting them on Instagram — I just went for it. And it actually worked.”

People started buying. First people from around the neighborhood. Then beyond.

On Valentine’s Day 2015, Blucid Floral graduated from the porch and began designing and selling arrangements from a shop at 5113 St Claude Ave. in the Lower 9th Ward. The first designs were Valentine’s Day bouquets bundled with custom-made sunglasses designed by her friend, Raquel Boyd, of ShopSpreadLA. They sold 20 pieces that day for $75 per, enough to cover costs and make a profit. And Blucid Floral was on its way.

Still, Charlot knew that she needed to continue her education. She began educating herself on different types of flowers, how to care for them and arrange them — the mechanics of floral design. She reached out to a network of florists for advice, and traveled to New York City to work with acclaimed floral and event maven Preston Bailey as a protégé. There she helped design the floral arrangements for a wedding alongside Bailey and got a taste of what her future would hold.

Charlot’s first big break was also her first wedding at Southern Oaks Plantation. The table arrangements were her original design, and people started to take notice. All of a sudden, clients were finding her. 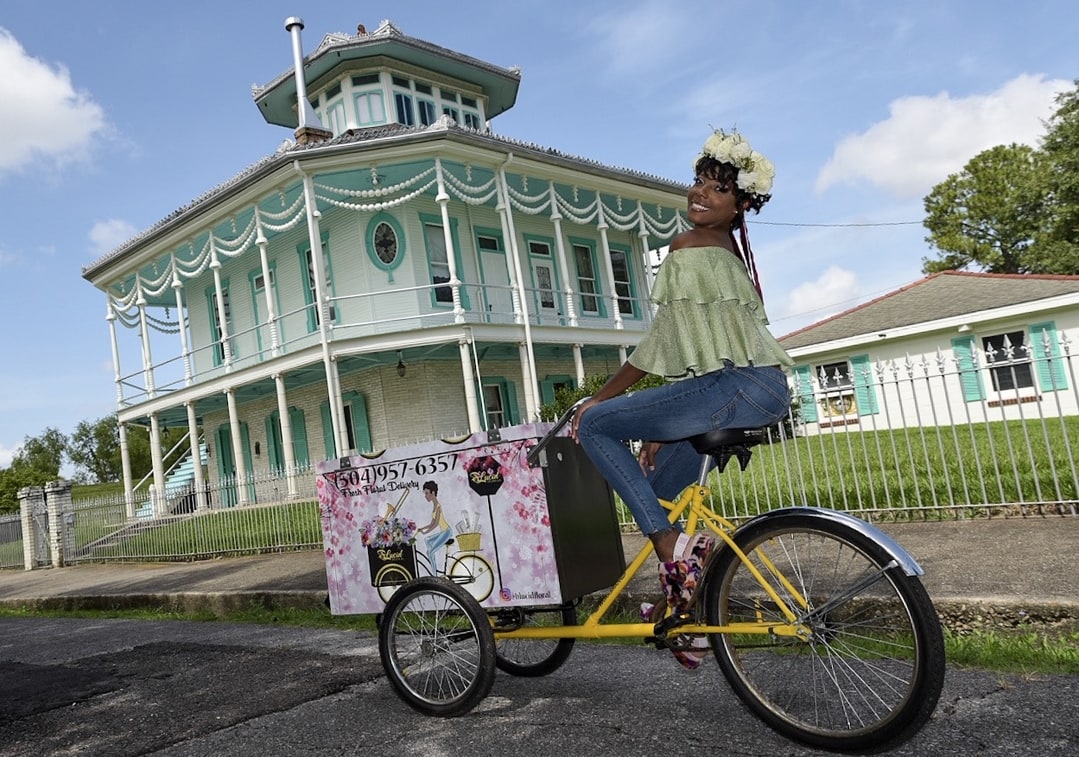 And she was finding clients. She commissioned a custom-built tricycle so she could sell flowers directly to the community. The bright yellow bike, with a hand-painted box on the front, like a cooler, helped her pedal and peddle to people throughout the city.

“I wanted to do something that sets me apart… and I didn’t see anybody doing that,” she said. “I wanted something unique, but I also wanted to be able to reach the people.”

Charlot jokes that people were first lured to her mobile floral shop because they thought she was selling ice cream or beer. Instead, they would find that the pedal cart contained beautiful bouquets of roses, lilies and tulips.

Even as her business grows, her bike continues to be an important part of Blucid’s brand, especially during festival season, where her flower crowns have garnered attention.

“I bring my bike out around festival time, in certain areas where I’m allowed and I have all of my fresh floral crowns made, and the main attraction is the bike, of course,” she said. “I sell my floral crowns out there and people love it.”

Proof of this love was evident at Jazz Fest, where more than one festival-goer was spotted wearing a whimsical Blucid Floral crown.

These floral crowns also play an integral part in her annual community outreach event called Connected to the Crown. This free event, which takes place Aug. 1 this year, provides girls and young women, ages 11-18, a tutorial in constructing their own floral crowns, as well as fellowship, a four-course meal provided by Keisha the Cooking Therapist, and a keynote speaker.

“This year I’m bringing a few people from my neighborhood, doctors and pharmacists,” she said. “We all grew up together. And I want the young ladies to meet them and know that it is possible. Whether you chose entrepreneurship or a college career, it can be done.”

Getting it done, and done in style, is Charlot’s specialty. If you see her in the streets, she might be selling flowers, or she might be dancing as a member of the Treme Sidewalk Steppers Social Aid and Pleasure Club. Yet her style is grounded and never far from home.

“Natural, vintage, over the top… simple yet rustic,” she explained. “I am a New Orleanian. I love magnolias.”