In the world of bartending, there are very few events as important as Tales of the Cocktail Foundation’s Most Imaginative Bartender Competition presented by Bombay Sapphire Gin. Now on its 13th year, the tournament pits bartenders from all over the United States and Canada against each other in a match of technique and imagination. After thousands of submissions were reviewed by a special committee — who tried and tested all of the recipes — the final 36 candidates presented their creations in front of a panel of judges at regional competitions in Portland, Oregon (West), Nashville, Tennessee (Central), and Philadelphia (East).

One of the 12 regional winners who will go on to compete for the title in February 2020 in Chicago is New Orleans’ very own bar maven Maggie Morgan. And considering the competition calls for creative inspiration and passion beyond the bar, we have it on good authority that Morgan is a strong contender.

Raised in Virginia, Morgan was a prodigal child in a family of artists. Her childhood was spent taking piano lessons, rigorously practicing Russian ballet, and what she thought would become her career — painting. She was so skilled in the latter that she received a full university scholarship. Soon into her first semester, she quickly realized that investing her time and resources in a fine arts degree would not be a practical idea, so she decided to take a sabbatical that landed her first stint in New Orleans.

After a short-lived, toxic relationship came to an end, she moved to New York in hopes of landing work as a model or dancer. “I just wanted to throw myself into a big city and figure myself out. I was trying to avoid having an existential breakdown while I figured out my purpose, cause up to that point I thought I was going to be a painter,” she recalled.

Instead, she found herself making ends meet as a cocktail waitress in New York. And where others would have frowned at the idea, 19-year-old Morgan was inspired by a new life calling. “Being a bartender is being a performer, but it’s also a human experience job. You are a f***ing psychologist sometime, and you are an entertainer other times, and you are an artist, and all of that spoke to me, and I was very intrigued by it.”

Morgan took it upon herself to learn as much as she possibly could about cocktails and spirits, being that “annoying server” who constantly asked questions. She had the theory down, but she hadn’t put it into practice, so she took a leap of faith answering the call of a restaurant group looking for American talent to open a speakeasy in Hong Kong. She got accepted and spent nine months honing her technique behind the bar.

New Orleans kept calling her back in her dreams, and she knew she needed to prove to herself that she could find inspiration in our creative city.

“It was one of those things, like when people have phobias, they make them do the things they’re scared of, emergent fear tactics,” Morgan explained. “So that’s kind of what I did. I wanted to come back and be able to experience this city the way that I wasn’t able to experience it before, and, I mean, I’m still here, so it worked.”

Her first job back was at the Swizzle Stick Bar (now closed) at the Loews, where she soon learned that hospitality means more than concocting fancy drinks, especially when the customer wants otherwise. One New Year’s Day, she found herself stood up by a date at Meauxbar, and instead of wallowing about it, she decided to treat herself to a nice bottle of wine and a proper meal. Her waiter happened to be none other than New Orleans’ boss-babe bartender— and Morgan’s close friend and work partner— Anna Giordano (Longway Tavern). As the meal progressed, Giordano asked what she had been doing lately, to which Morgan replied, “I’ve been working a lot and watching ‘Buffy the Vampire Slayer.’” It turns out that was one of the many things they were passionate about, and the reason why their yearly Party at the Bronze: A “Buffy The Vampire Slayer” Pop Up is one of the most sought out Halloween events of the season. Soon after this meal — which she still credits as one of the best in her life — Morgan found herself bartending at Meauxbar. 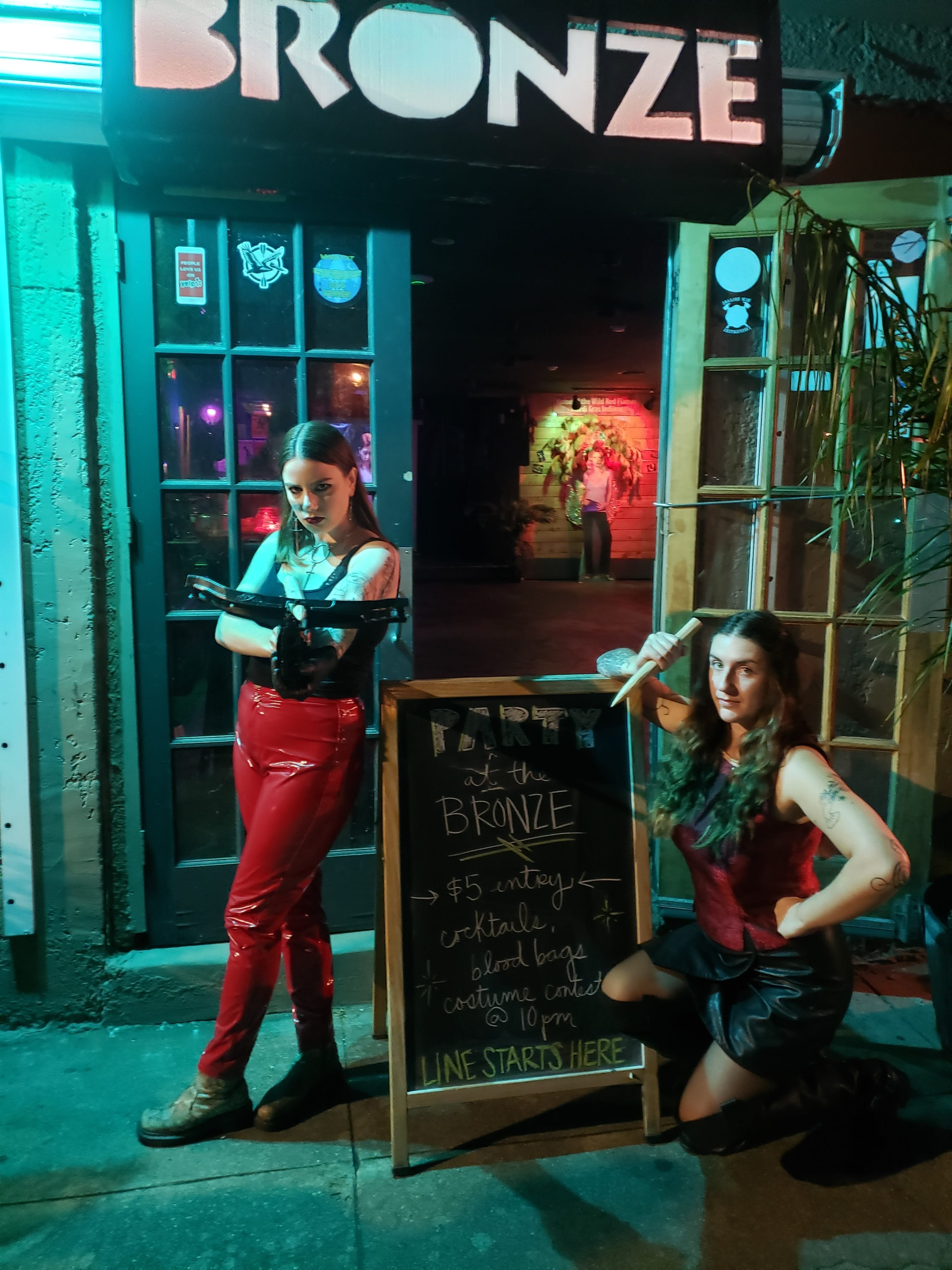 As she gained recognition in the industry, she was asked by bar entrepreneur Nick Detrich if she wanted to work for him at Cane and Table, where she got to train under the man she now considers her mentor. When Detrich and Chris Hannah opened up the popular Cuban Cantinero drinkery, Manolito, she was offered the position of bar manager. And that’s how she landed at their recent craft cocktail venture, Jewel of The South.

Morgan’s cocktail submission, Rule of Thirds, is an homage to her journey in becoming one of New Orleans’ most influential bartenders. The name makes reference to the guidelines applied in the process of composing visual images — the bedrock of any artist’s viewpoint — but it also hints at the three main ingredients used in her cocktail, the foundations of Cajun cooking, or as we refer to them, the “holy trinity.” Mixing a homemade bell pepper syrup with lemon and celery bitters, this riff on a gimlet is as straightforward and down to earth as it is tangy and sweet, with a bit of a savory kick provided by the Andouille seasoning rim. It is both as lively and creative as New Orleans and Morgan.

Here's our digs! Come check us out next month featuring the wonderful works of @lalibrowneart //

Maggie will also compete in the Canvas Challenge, a new component of the program that will task the top 12 finalists to bring an original creative idea of any medium to life for a chance to win a $25,000 grant prize and a mentorship by a creative visionary. She plans to use the prize to continue to push forward her passion project, produced alongside Giordano, Salon D’whatever. The pop-up, hosted the first Tuesday of every month, transforms the upstairs balcony bar of Santos into a temporary art gallery, providing a platform for local artists in the service industry to show and sell their works while spinning vinyl, selling threads and celebrating the talent New Orleans has to offer.

Make sure you check it out, and the next time you find yourself at Jewel of the South in front of the artist at her stage, ask her to make you a Rule of Thirds, and help her bring the title of Most Imaginative Bartender of the year home.