On one of her last days, she says a co-worker told her, “What if they stop selling?”

Now, Brooks’ hats are being sold in every Fleurty Girl store location, and sales have tripled.

We interviewed her to talk about her growing business and how the Who Dat Nation has helped her succeed.

When did you start doing hats?
“I’ve been doing hats since 2012, but those were mainly snapbacks. I started doing embroidery two years ago when the dad hat craze hit. They were softer and I was able to bend them and get them on the machine. That’s when I became the official ‘NolaHatPlug.’”

Your first one that really took off was the Super Bowl scoreboard one, right?
“The scoreboard ones went crazy. I really wanted to do it exactly like it was on the shirt, but I thought if I do it in black and gold it would fit so much better, and it just went crazy.” 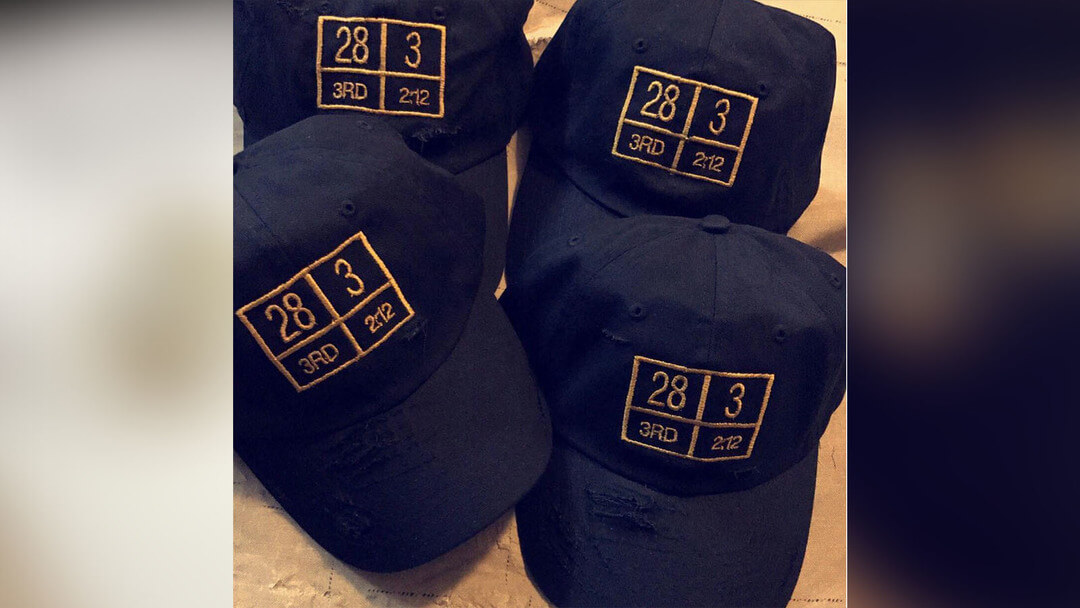 How’d you know it was going to be a hit?
“I always put my stuff on Facebook first because it’s family, so they’re going to tell me if it’s bad! So, I put it on there first and everybody was like ‘This is so dope!’ So, then I put it on Twitter and Instagram and it went crazy. It had like a million likes and RT’s on it. I think the first day, I got about 150 orders.”

What other ones have you made that have taken off?
“The three-player hat, that Kamara, Thomas, Brees one. That hat went wild. I think it’s because I put it on Twitter and Mike Thomas retweeted it, I think Justin Hardee retweeted it, a couple of the players retweeted it.”

And you drop them off at the facility?
“I always make a few and bring them over and just hope that they’ll pick them up. I know Cam Jordan has picked up a few. Darnell Sankey, he’s on the practice squad, he picked up a few.”

What about the player’s wives?
“I’ve gotten orders from a lot of them. Texans player Senio Kelemete’s wife, she ordered for maybe 20 for Christmas. I’ve sent a bunch to Nikki Jordan, Cam Jordan’s wife. The Eagles, the Steelers, a bunch of them.”

😍😍😍 This little handsome guy w his dad, Texans Senio Kelemete‼️ Thanks again @giovanakelemete for all of the support ♥️♥️♥️

How did the ski masks come about?
“The ski mask thing, I’ve been wanting to do a ski mask since I saw Michael Thomas do it that first time in October. I just never had the time. When I found out

we were playing the Eagles, you know they’re doing the ski mask now, and they said that we are copying them. They started in December. So, I was like, ‘Oh no, we have to take over.’ I honestly thought it was just going to be my Twitter Saints family that was going to get them, because they support me with everything. But when I put them up on Instagram and Twitter, they went crazy. I have people DM’ing me, literally in my sleep, every night for those ski masks.”

Can you tell me a little about your own story? You stopped working to do this full-time?
“I’ve been wanting to do it, to step out and do it full-time. I never did it because I was always scared. I was like, ‘I don’t think I have the clientele or the sales yet.’ For some reason this year, my sales tripled, even quadrupled. I was like, I think this might be a sign that this is the time to do it. I had the exposure, I had a lot of people supporting me. And I have all these crazy ideas even after football season, so I was like, now I think this is the time. I’m still scared but it’s working out.”

You’ve even gotten into Fluerty Girl’s stores.
“Because of an article from Very Local! I posted it on social and on Instagram and I tagged her and everyone else featured. I’m guessing she saw the post and she wrote in the comments that she wanted to order them. She initially only wanted 35. I’ve made over 600 for her this far. Every week she emails me for more. She’s put them in each store, and online. I literally can bring her 200 one day and the next day she’ll be emailing me for another 200, that’s how fast they sell for her.”

Lauren Haydel (aka Fluerty Girl), says she has a similar story.
“I read her story that she was selling T-shirts and she used her tax money to sell them and they did great and she ended up quitting her job. We met up at her warehouse and she talked to me and was amazing. When I told her I quit my job she was very supportive and even upped my sales to help me. To this day, she always tells me she’s going to support me because she’s inspired by that.”

Did you think it making hats would be this big?
“It’s amazing because honestly when I started doing hats I never would have thought I’d make it this far. I always used to be like, ‘I don’t think hats will blow up,’ and I didn’t see myself making a big fortune or being famous over hats. But I think that’s possible eventually in the future because they’re really going places and a lot of big-name people have been in contact with me. I think I can do it, as long as I keep being creative.”

You’ve had more than one hat be popular, what do you think it is other than the product?
“I think I’m very affordable and I try to stay very affordable. I lot of people have told me I can go up on my prices, but it works for me. I want everyone to be able to wear them and buy them. I’m not trying to make millions off of people, I’m just trying to get my hats out there.”

So, what’s next for NolaHatPlug?
“I have Mardi Gras coming up. We have Mother’s Day, we have Valentine’s Day. We have a lot. What I want to start doing is I want to start making kids hats. I have so many ideas.”