Carnival cocktails that aren’t cancelled because of COVID-19

They might have canceled parades this year, but cocktails aren’t canceled! Whether you’re working on your house float or chowing down on king cake, these festive concoctions are sure to get you in the spirit. Here’s a list of some bars and restaurants that are offering Mardi Gras cocktails-to-go, so that you can stay socially distant and safely get your drink on!

Bakery Bar
Cocktail: Mardi Gras Martini
What’s in it? This cream cheese and cinnamon cocktail confection will have you dancing in your seat.
Price: $10

Sala
Cocktail: King Cake Martini
What’s in it? A festive cocktail made with house-made cinnamon-infused vanilla vodka along with Irish cream and amaretto.
Price: $12 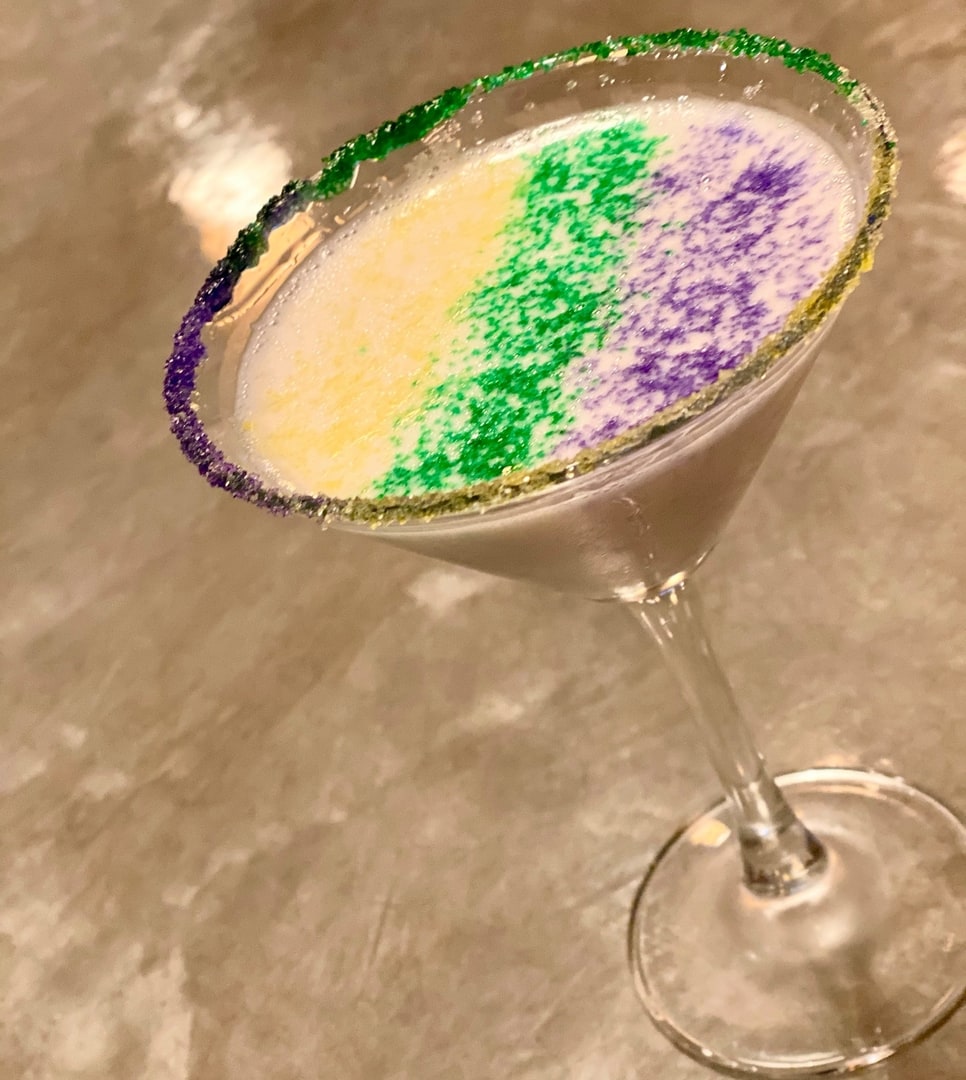 The Company Burger
Cocktail: King Cake Colada
What’s in it? This frozen cocktail, made with Gambino’s King Cake rum cream, is a piña colada with a king cake twist!
Price: $11

Jewel of the South
Cocktail: Creole Hot Buttered Rum
What’s in it? A spicy chocolate cinnamon buttered rum based on our favorite king cake flavor.
Price: $10-$12

Muriel’s
Cocktail: Carnival Thyme
What’s in it? This drink made with Don Quixote Anejo rum, Luxardo Maraschino liqueur, hibiscus thyme tea, and lime is a delicious way to celebrate the season.
Price: $11

Frey Smoked Meat Co.
Drink: King Cake Milkshake
What’s in it? This booze-free treat is a king cake in a glass and a great way to celebrate Mardi Gras, without the alcohol.
Price: $8

Ralph’s on the Park
Cocktail: King Cake Cocktail
What’s in it? A magical mix of Stolichnaya Vodka, Chila Horchata, Butterscotch Schnapps and cream with a Mardi Gras sugar rim.
Price: $10

Barcadia
Cocktail: Zulu
What’s in it? A frozen concoction made with rum, cream of coconut, pineapple, lime that will set your spirit right.
Price: $10

Desi Vega’s Steakhouse
Cocktail: King Cake Martini
What’s in it? This mix of king cake vodka, Rumchata and milk shaken and served in a glass with a Mardi Gras-colored sugar rim is sure to get you in the Mardi Gras mood!
Price: $14 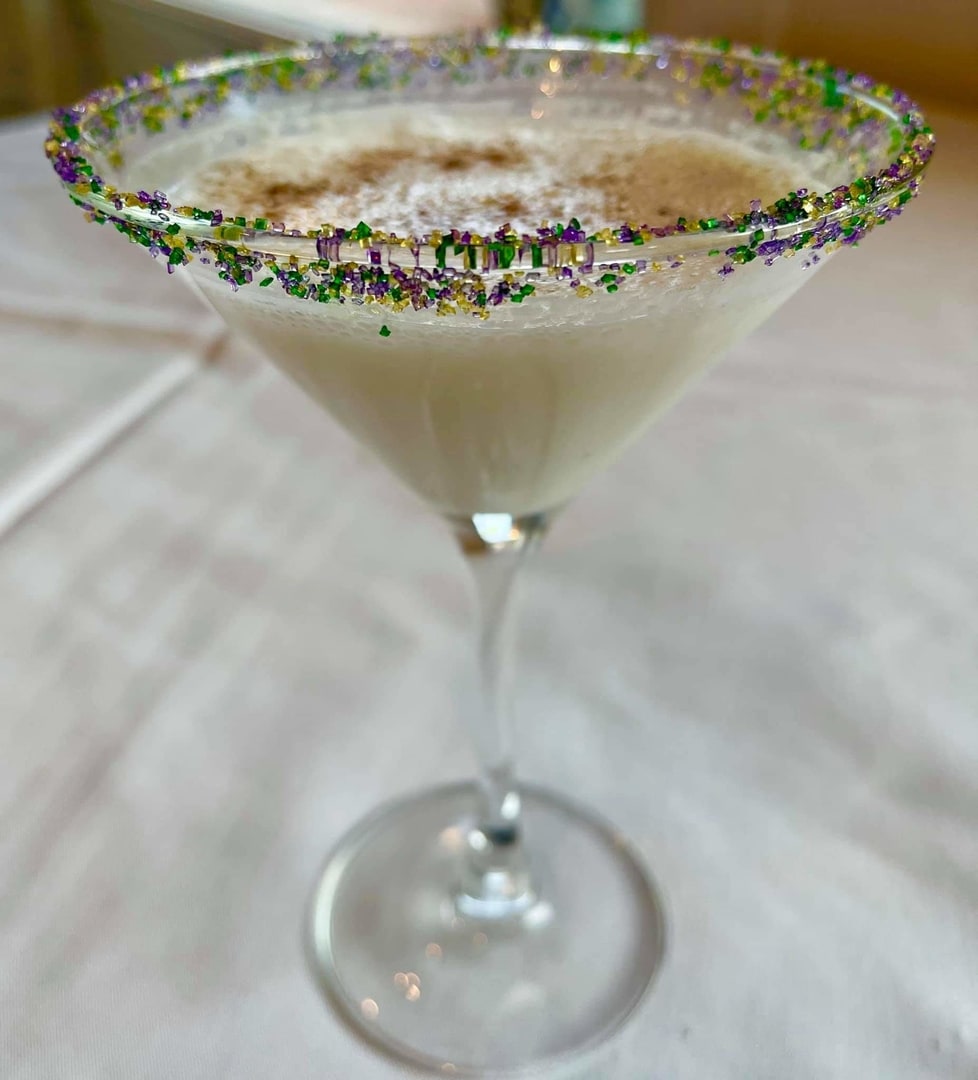 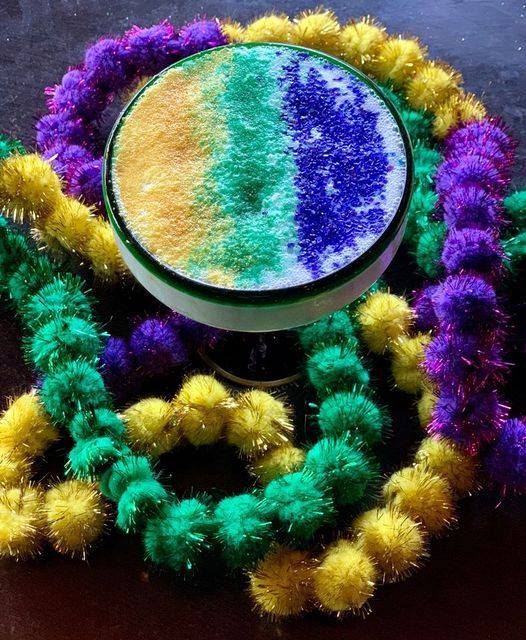 Porter & Luke’s
Cocktail: Bacchus Bramble
What’s in it? A twist on the classic made with Ford’s Gin, lemon juice, Chambord, simple syrup and a lemon twist.
Price: $10

Riccobono’s Peppermill
Cocktail: Mambo Cosmo
What’s in it? This cocktail will get you dancing with vodka, Cointreau, Rose’s lime juice, a splash of cranberry juice, served with a gold sugar rim.
Price: $9

Looking for more ideas for a socially distant Mardi Gras?