A Muff-a-lotta, a baby doll, a Lady Roller, Oubre wears many hats in the city.

Anita Oubre effuses New Orleans – through sparkles and satin, shimmies and shakes, sultry glances, street dancing, and boundless hospitality – she is an ambassador for the city.

“I like to say I’m a naturally New Orleans girl,” Oubre offered.

It is an ephemeral but undeniable concept, and she embodies it. You might find her as a grand marshal leading a festival parade through the French Quarter, or sashaying through the streets in a baby blue poodle skirt with the Muff-a-lottas dance troupe, or early on Mardi Gras morning as Magnolia Rose, leader of the Mahogany Blue Baby Dolls, or buckjumping Uptown with Ms. Linda Green and the Lady Rollers. But wherever you find her, you’ll find a woman exuding strength, confidence and New Orleans culture. 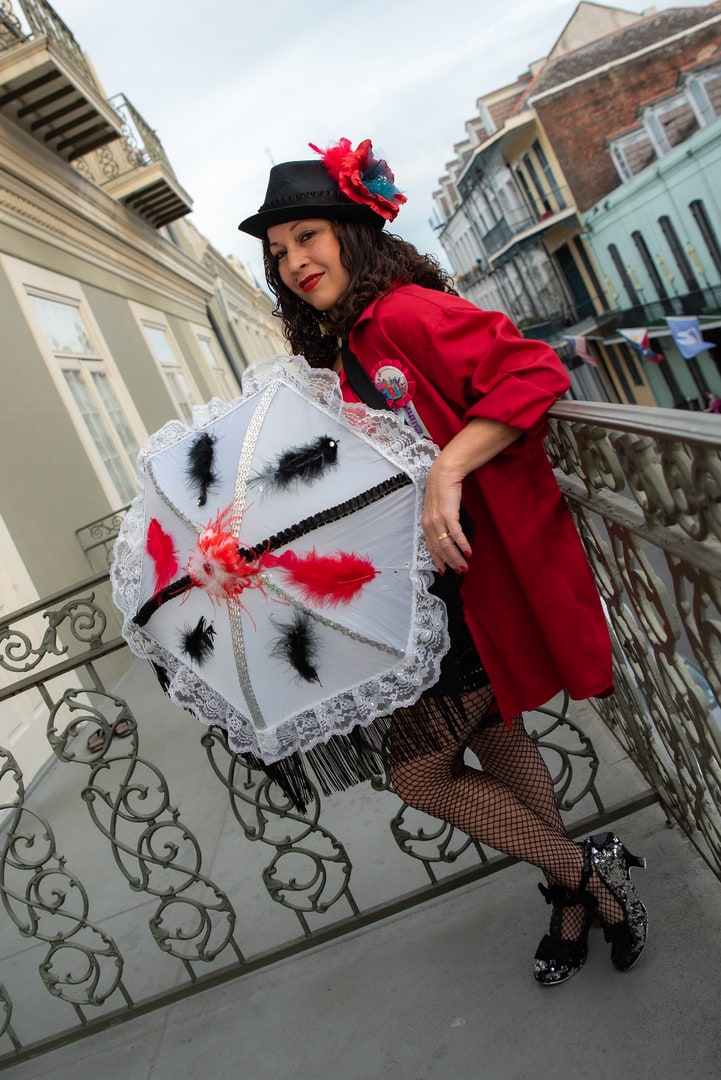 One of seven children, Oubre said her Nicaraguan father and “Italian by way of New Orleans” mother met “out clubbing,” and instilled a love of music and dance in her at an early age.

“My mom was into music, my dad liked to dance,” Oubre remembers. “When those two would get together and dance, the whole room would stop. Those are some of my fondest memories. Music playing, and my mother and father dancing. And my mom had these hips that would just not stop.”

But the dance almost did stop for Oubre when her parents moved from Mid-City to Kenner and put her in Bonnabel High School, a situation which she found untenable.

“I was suffocating,” Oubre remembered of life in Kenner. “I left for the big city.”

At 16 she moved to Third and Galvez streets, sharing a home with her older sister and brother-in-law. Halfway between the Magnolia Housing projects and the Calliope Street, she became enamored with the second lines that passed by, and the chants of the Creole Wild West tribe of Black Masking Indians that roamed the streets on St. Joseph’s night. But at first, she would have to admire this culture from afar.

“Even as a teenage girl my sister and brother-in-law would not allow me to partake in these events,” Oubre reminisced. “The parade would go down Washington Avenue, and I’d be on the balcony three blocks down, watching and looking and longing to be part of that. And I was always told, ‘It’s really dangerous out there. You don’t need to follow that. You don’t need to do that.’”

But Oubre, a self-described rebel, had other plans.

“I’d get around it by telling big fat white lies,” she said. “‘’Hey we’re going to a talent show or we’re doing something after church’ and we’d sneak off, my friends and I, and follow it and it was always really exciting, and something about it being forbidden… but I was always called. I would hear the music, hear the horns, hear the drums.”

If Oubre was called to the culture early on, life, like it always does, had other plans. She had her first of six children at age 18. While raising her family, she worked in hotels, as a bartender, and eventually ended up in human resources. Her life was full. But sometimes you don’t know what’s missing until you find it.

“In 2009 the Muff-a-lottas were formed,” Oubre recalled. “And that Christmas I had my youngest son out on Canal Street to see the Christmas parade. And there was this group of sassy, sexy women, strutting down Canal Street to this ’50s rock ‘n’ roll New Orleans music and they were so cute. And they had every shape of women and their outfits were flattering and they just looked like they were having the time of their lives. And I thought, ‘I wanna do that.’”

The only problem was the troupe was not accepting any new members. But Oubre wouldn’t take no for an answer. She was told she could join the group as a “bun warmer,” to cheer on and assist the members. She pulled the coolers laden with beer and water. She held the banner, and cheered and encouraged her cohorts. Eventually, it paid off. In 2010, she was admitted as a class of one, a reward for being instrumental to the group’s success. 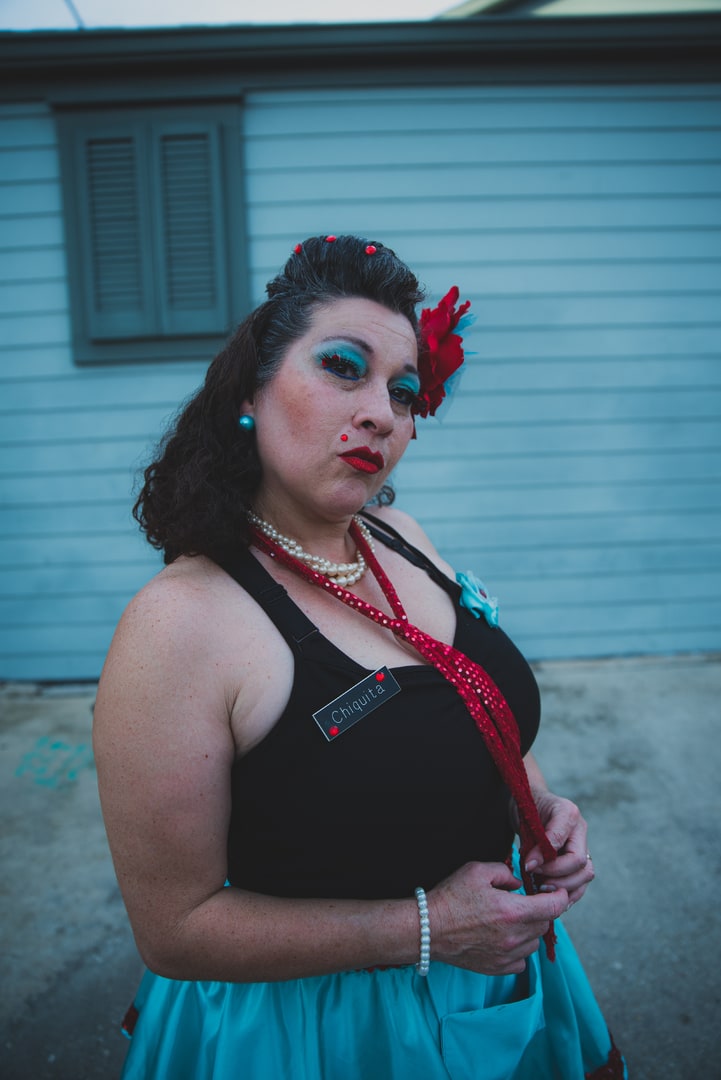 Most people would have stopped there, but Oubre has an outsized passion for the city. In 2015, she was offered a membership into the Black Storyville Baby Dolls, and later formed her own group, the Mahogany Blue Baby Dolls.

“You are either born into being a Baby Doll or you are invited in,” Oubre explained. “There is no other way in. You can’t just pull out a dress, put it on, and say, ‘Hey, I’m a Baby Doll.’ It doesn’t work that way.”

The Baby Dolls are part of the lore of Storyville, the long-defunct red-light district of New Orleans. Oubre was first introduced to the tradition as a writer for the New Orleans Tribune, when she interviewed Antoinette K-Doe, Tee Eva, and Miriam Batiste about Mardi Gras traditions.

The origin of the Baby Dolls, like many aspects of New Orleans culture, is somewhat murky, but the generally accepted theory is that it was born out of prostitution. Instead of viewing this as a liability, Oubre sees this as a source of strength and resilience.

“They were defying the norms of the time,” she said. “You weren’t allowed to show your ankles. But they pulled those dresses up. They hiked them up to their hips. They put on garters. They had cigars, they had razors. And they came out and said, ‘We’re gonna do Carnival Day. We’re gonna go out on Canal Street. We’re gonna be seen. We’re gonna be heard.’ Some women turn their nose up at the idea of prostitution, but these women, I feel like that was all they had was their body. So, in my own way, I feel like these women should be honored. They did what they had to do to survive.”

Oubre and her Mahogany Blue Baby Dolls use their agency to help the community. They volunteer at the New Orleans Mission, feed the homeless under the Claiborne Bridge, and are partners with Cystic Fibrosis Foundation and the NOLA Blue Doo Run, a fundraiser for prostate cancer. Community is at the core of everything Oubre does.

Her generosity of spirit did not go unnoticed. In 2018, Ms. Linda Green, president of the Lady Rollers Social Aid and Pleasure Club, named Oubre the queen of their second line parade. It was an honor she could hardly imagine.

“Being Queen, it was a high,” she said. “It was such a high. When I entered the crowd there was a group of Baby Dolls waiting for me. There was so much love. It blew my mind that they were all there to support me. That whole day was nothing but love. I had my daughters with me. My dearest friends. My Baby Dolls. My husband. It was so beautiful. The parade went through the neighborhood I grew up in and I saw all these people that I had known my whole life. It was beautiful.”

For Oubre, it was the culmination of a life immersed in the culture. She had come full circle.

Feck’s songs sound akin to our quarantine current situation: manic outbursts of energy being let out into empty rooms because it and you have nowhere else to go. The movement,...

How a local artist is paying homage to Black New Orleans

Jacq Francoi$ is a local artist who pays homage to Black New Orleans culture with his limited runs of highly-collectible and buzzworthy art pieces.