Flanked by one of the last remaining buildings of the Iberville Housing project is a glistening hidden gem; Backatown Coffee Parlour.

This isn’t your average coffee shop in any sense of the word. The high ceilings, light fixtures, furniture — in fact, every inch of the community space — has been thought out.

“Presentation is everything,” said Alonzo Knox, who owns the shop with his wife, Jessica. “We try to have everything presented in a way where you wouldn’t see it anywhere else. Unlike other coffee shops, we don’t have you stand in line waiting on your order. We individually walk it out, we don’t yell out names. When you have a plate here, you’ll see it garnished in some kind of way. That’s something we are intentional about.”

Knox, who is a Marine Corps veteran, scouted the spot on Basin Street. Knox and his wife live just a few blocks away, in the Treme neighborhood. The windows facing Basin Street bring in tons of light, and aside from the lone building outside the front door, you’d never guess the shop sat in the spot of a former housing project.

“That’s really the attraction,” Knox said. “That’s really what intrigued me most, that whole juxtaposition and the fact that the area has changed.”

Backatown is in the same building as Magnolia Yoga Studio, part of a post-Katrina resurgence in the Iberville area.

“I gave into this spot because I felt it was prominent for us, although it was still the projects,” Jessica Knox said. “We know that our people buy from us. We weren’t afraid of that myth that says they don’t, and we wanted to be the ones that say, ‘We’re going to stay here and we want other people like us to invest in our community.’ So we wanted to be a big part of that revitalization and say this is black-owned, it’s nice, it’s for everybody.”

On any given week, Backatown has a calendar full of community events. From book signings to pop-up shops, the business serves as a sort of incubator for others and a place for people to meet.

The menu offers vegan options, soups and sandwiches. The peanut butter, banana and honey sandwich goes back to Alonzo’s college years, when he said he couldn’t afford anything else. Jessica’s flair is also on the menu, with petite sweet potato pies reflecting her Mississippi heritage.

“Sometimes in our neighborhood, we can only get certain things,” Jessica said. “You have to travel outside of the neighborhood if you want to get healthier, lighter fare. I feel like it’s so unfair, like we don’t want that. We do want that, it’s just not being offered to us. It pigeon holes us just to go to this place because that’s what’s closest to us.”

The atmosphere immediately takes you away from the touristy feel that now encompasses Basin Street.

“We looked at a lot of the old Storyville parlours, so that’s why it’s Backatown Coffee Parlour,” Jessica said. “We wanted it to feel like a jazz-infused place where people can come, sit, laugh, have fun, just like you would in Storyville. We think Storyville is more than just Madam’s and all that. Storyville was a community of people, artists and musicians coming together and having a good time.” 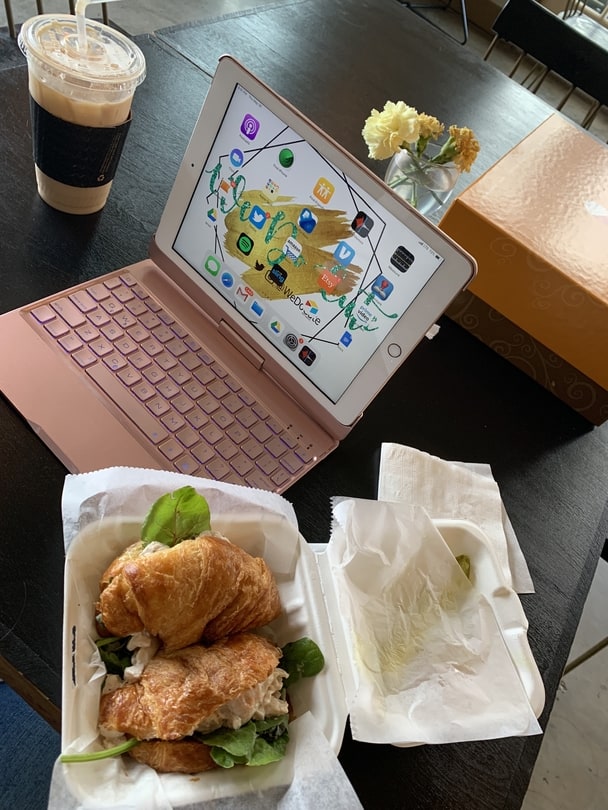 Alonzo said in the future, he hopes to expand and possibly add franchises.

“I would like to see Backatown run by a lot of young people,” he said. “At some point, I want to step back, my swag is diminishing. Having that fresh young face that reflects a community and introduces people that whatever stereotype you may have about black people, in your engagement with me behind this counter, I can change your mind.”

The Knox’s said the reason their business exists is because of the community.

“New Orleans gives life,” Jessica said. “We love the community and we love our neighborhood. People told us we were crazy to live in this area. What people see on the outside, we know that’s not the truth. We know the truth because we live here.”