The video features Dee-1, flanked by Black Masking Indians, whose culture the phrase pulls from.

JD Carrere is hyper-aware that Black Masking Indians (also know as Mardi Gras Indians) are not a brand.

Carrere, a local son and senior content manager for the New Orleans Saints and Pelicans, was charged with coordinating the Pelicans promo video for the second season with the theme “Won’t Bow Down.” The organization introduced the phrase to its games last season, and this time they wanted to make sure the video represented the culture from where it came. The resulting footage is an exhilarating high energy collaboration that places the emphasis squarely on local talent and deeply rooted culture.

“What kept me up at night was making sure I made something that the fans in this city would be proud of, that it would feel authentic and respectful to our culture bearers,” said Carrere, who moved back home with his wife and three children from Los Angeles just before the pandemic. He started his new job on March 31.

With a background that includes television news reporting and video production for the Lakers and the Dodgers, Carrere was clear on how the video project needed to be executed.  And with his long-standing relationships with local entertainers, dating back to joining 2-Cent TV after Katrina, the all-local cast he assembled was a slam-dunk.

“I just wanted the end result to feel that is was directed to local fans,” he said.

Featuring yet another electrifying musical collaboration between Mannie Fresh and Dee-1 – the pair are wrapping up an album for release early this year – the video hangs on the perfect beat, a catchy groove that the New Orleans-born rapper owns from the jump. Themes of hard work and dedication roll over shots of serious-looking team members on and off the court as Dee-1’s storytelling unfolds against familiar locations around the city.

A Ralph Madison Production, the 48-second clip culminates with Dee-1 dancing to the beat with two fully masked chiefs from the Mardi Gras Indian Council. Golden Eagles Chief Joseph Boudreaux, Jr. and Monogram Hunters Chief Jeremy Stevenson steal the spotlight with their brilliant lime green and teal feathered hand-beaded suits. They mirror the two-story mural artist Brandan “BMike” Odums created for the project on the side of his Bywater studio, using their photos for inspiration.

A visual artist and filmmaker, BMike creates art at the intersection of activism and community with eye-popping murals that tell stories and transform both viewers and city spaces. His appreciation of New Orleans is informed by a deep and abiding respect for the elders who came before him – which is why he took a minute to think about this project.

“I typically shy away from painting masking Indians out of respect for the complex artistry that goes into the creation of those suits,” said the artist, who finished the towering mural in just six hours. “I never feel like I could do their work any justice. But to see their excitement when I finished this mural was amazing.” 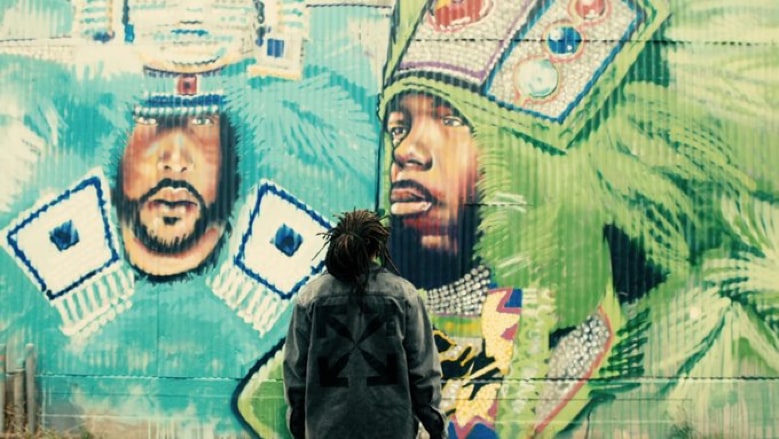 Chief Joseph Boudreaux, Jr. whose tribe masks in the 13th Ward Uptown, absolutely loves how the video turned out.

“I feel that it’s great that the Pelicans are reaching out to the culture of the city and embracing it,” he said. “The team has to connect to the city, to the fans, for them to get behind it.”

Boudreaux, Jr., who is still mourning the loss of Mardi Gras this year – “it’s a culture shock to our culture” – grew up in the Golden Eagles, groomed to be chief like his father Boudreaux, Sr. and his grandfather Monk Boudreaux before him.  “The mural BMike did is just amazing – I brought my daughters to see it. I’ve had people say, ‘We saw you on the side of that building.’ I can’t believe how fast he worked.”

Speed was of the essence and every player in this project delivered with lightning grace and acuity.  Dee-1, born David Augustine Jr., grew up in the East and was a star basketball player at Ben Franklin High School.

“I think if you’re looking for an artist from New Orleans who loves basketball, I’m at the top of the list,” he said.

With experience collaborating with the likes of Sallie Mae and the American Heart Association,  Dee-1 has the chops to craft lyrics on point. He was confident he could tell the team’s story.  Dee-1 and Mannie Fresh met with Carrere to crystallize the vibe and messaging that the Pelicans were shooting for.

“We met with JD and then went into the studio and created the song,” he said. “It came together that same night.”

The video represents an important moment for New Orleans, said the artist.

“We don’t have enough of the New Orleans hip hop culture meeting Mardi Gras Indian culture,” he said. “This collaboration between those two worlds is real.”

He nailed his part of the video in 20 minutes. “The whole thing went by so fast.” Once the planning was finalized, producing the video wrapped in two weeks.

“Mardi Gras Indians have been saying we won’t bow down for hundreds of years,” said  Boudreaux Jr.  “This video is going to get that message in front of a whole new group of people. And I’m proud to be a part of that.”

“We are in a time when we need unity more than ever in the world,” Dee-1 said.  “Everything about this just felt right.”