In the back kitchen of Arabella Casa di Pasta, David Roe measures cups of sugar into zip-close bags while Joe Fontana portions out cookie dough from logs to disks.

Roe adds green food coloring to one bag, red to the other, then carefully closes them and works the food coloring uniformly throughout, until the sugar is no longer white but pleasing shades of emerald and vermilion – the colors of the Italian flag. Fontana, meanwhile, continues to cut the portioned dough into smaller strips before forming them into sundry shapes that will be baked and decorated and eventually placed — approximately 2,000 cookies in total — on the St. Joseph’s Day Altar of St. Augustine Catholic Church in the Treme, the oldest African American Catholic church in the western hemisphere. It is a labor of love, and something Roe does, as any good Sicilian boy would, for mama. 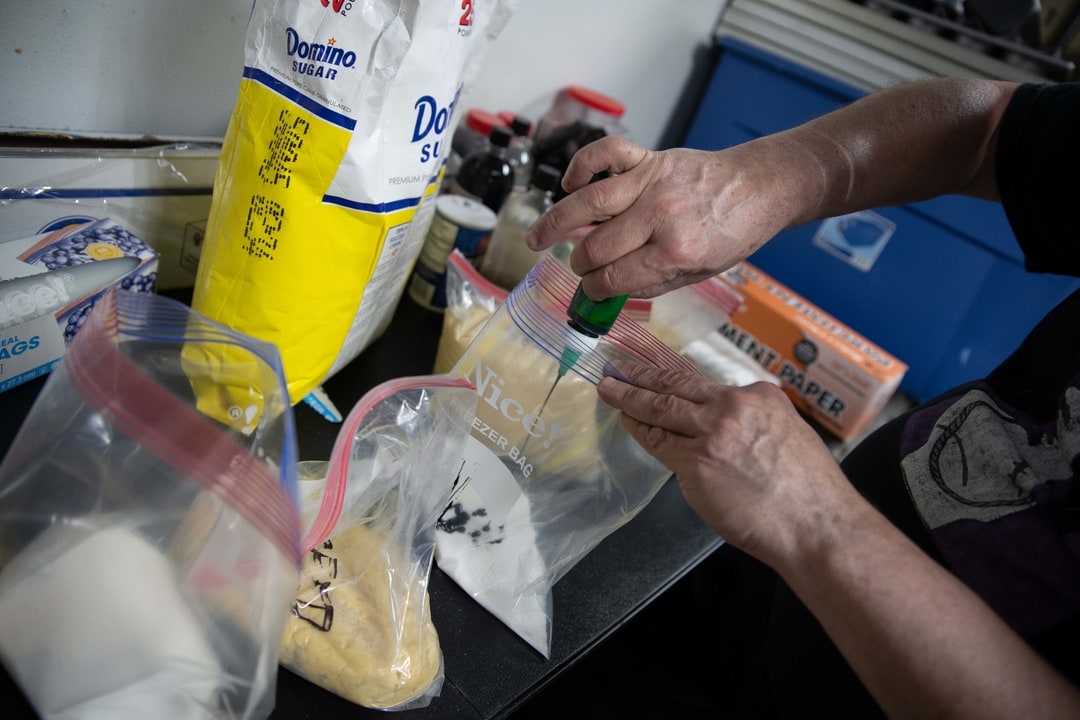 “Kathleen Barrow, one of the women who barricaded themselves in the church post-Katrina (the archdiocese tried to close the church after the storm), is my Ma Ma,” Roe said, recalling how he first became involved with St Augustine’s. “She is my New Orleans mother. And the St. Joseph’s altar is one of those things you do for your grandmother, for your mother — and I have two mothers — my New Orleans mother and Salvatrice Palermo Roe. My mother loves that I am doing this St. Joseph’s Day altar. It is the most Catholic thing a boy can do.” 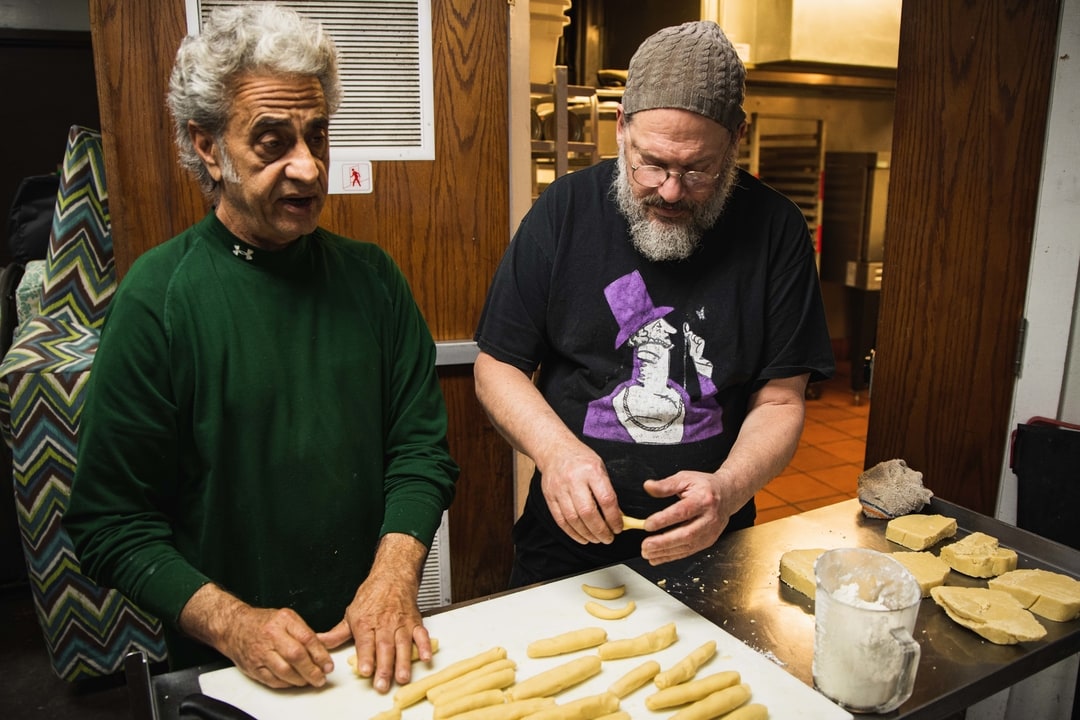 Armed with the recipes of his grandmother, Carmella Vasta Palermo, Roe began baking for the church. He baked Cuccidati, the Italian fig cookie that he likens to “a power bar.” He baked the almond cookies and anise cookies and biscotti. There was only one problem.

“So in 2013 I did it by myself, and it’s really hilarious, the first bake I did enough to cover this table twice maybe,” he said, motioning with his hands to an area about 2 foot by 4 foot. “And the food was gone as soon as the service was over, and I knew I had to up my game.”

And he did up his game, adding his longtime friend Fontana in 2014 to help with the production of the cookies and breads which adorn the altar. Fontana was a natural.

“I come from a Sicilian family too,” he quipped.

Until recently, they were still confined to Roe’s home kitchen, but last year, they were graciously offered the use of the Arabella kitchen, which Fontana deemed, “much more delightful. What would take us three days took us two-and-a-half hours.” 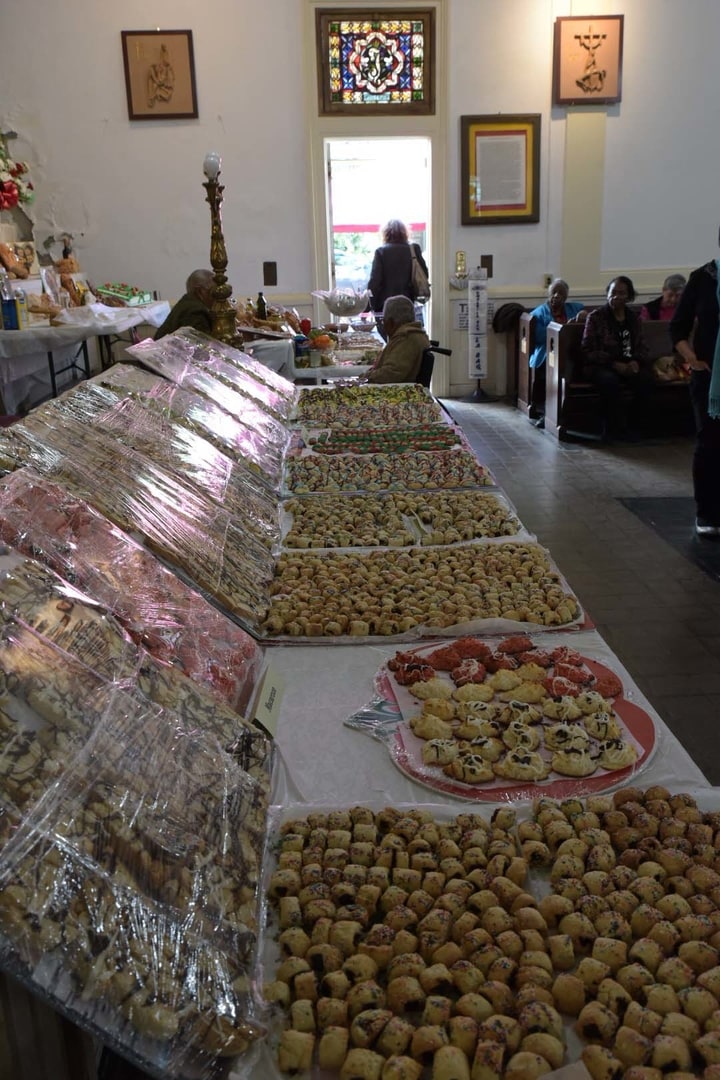 Roe and Fontana work together like a musical duo, which makes sense, as Roe has spent years as a pianist and bandleader on the New Orleans music scene, most notably with The Royal Rounders. Fontana, an actor who has appeared in “Treme” and “Mutants” among other ventures, gives an air of gravity to the proceedings — and make no mistake, baking thousands of cookies and dozens of loaves of bread is no easy task.

Roe and Fontana usually begin baking approximately three weeks before St. Joseph’s Day, which gives them time to produce for each section of the altar, which is portioned into three tiers representing Jesus, Mary and Joseph. The most intricate baked goods are the sculpted breads, which are shaped into symbols representing each figure — a cross or fish for Jesus; a heart or flowers for Mary; a ladder or saw for Joseph — among other possibilities. The bread, being the most perishable, is the last to be baked.

Fortunately for Roe and Fontana, they no longer have to go it alone.

“I love that we have Marrus,” Roe gushed about his friend, a Jackson Square artist. “Marrus over the past couple of years has taken over the decorating part. She started a couple years ago and then invited some friends who are also artists.”

Still, the bulk of the baking is done by the two men, carrying on the traditions that were passed down to them by mothers and grandmothers.

“This is nothing I ever thought in my life I would do,” Roe said as Fontana laughed in the background. “But once I did it it was obvious. This is how best to be an ancestor worshiping humanist. To use your grandmother’s stuff. Make your mother very very happy that you’re doing this thing. And every year when they open the doors and people come and see it there’s an ego rush. The performer in me loves to see the people going, ‘Wow.’”