The house boasts custom animatronics and thousands of lights for the nightly show.

By now, you’ve seen videos of the Victorian mansion on Magazine and Second streets. Animatronic skeletons sing along to “Thriller” and “Bohemian Rhapsody” as zombies and ghosts float through the upstairs windows.

We talked to owner David Gentry, the mastermind behind the boo-tiful house to find out how the spectacle started. 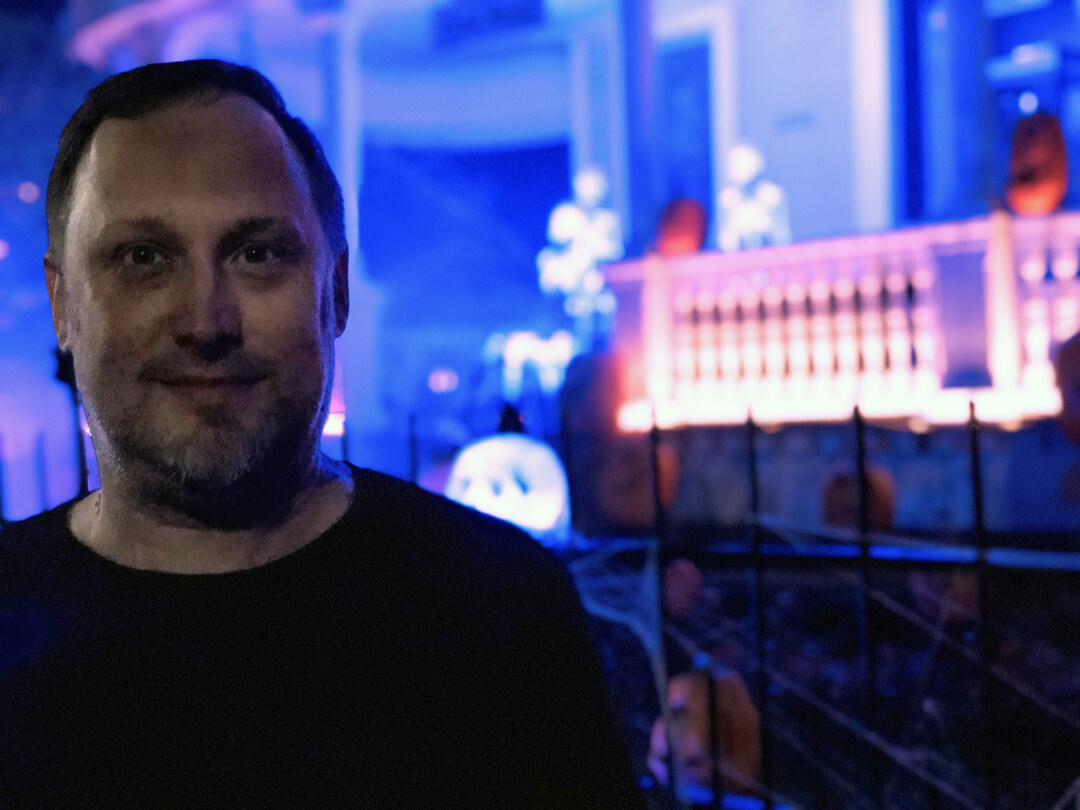 How long have you been doing this?

“This will be year number seven, we’ve been at the house since 2011, we started in 2012 and it wasn’t nearly what it is now, we had one green ghost flying window to window. There was no sound until maybe three or four years ago.”

We hear you’re an engineer?

“I’m a software engineer, I’m also an attorney and a business owner. I wear lots of hats.”

How did it get to be such a big production?

“So it kind of evolved. The first year I was inspired by the architecture of the house. I wanted to do something fun, just to see if I could do it. The original ghost went from window to window and kind of on the side of the house, back and forth to make it look like there was really a ghost upstairs. It was something to try just for fun. Once I perfected the technology, I found out I could control lots of things. I could control the lighting and add that out there. That started evolving into added things to see what could be done.”

We’re getting in the spirit this month for Halloween by making a stop at Ghost Manor. Let’s check it out!

How long does it take to build everything?

“For the skeletons, the heads are removable and I have the four heads mounted to a board. Any time during the year I can put a computer in front of the four heads and start putting down jaw and head movements. It takes a while and there are projects that are in different stages throughout the year. Usually, the newer scenes, like the two newest scenes this year, I started on before last Halloween, it could be 14, 15 months between conception to when it’s really complete. It’s not like I’m working on it every day during the year. It’s busy, there’s a lot more work in August and September. Throughout the year I have the time to tinker with new ideas and experiment. Every year I’m trying to learn and apply something new. Last year, the zombies that are dancing in the windows, that was the first time I developed my own characters. A lot of the video sequences were the extensive editing of existing sequences, but these I actually used a program to custom create the characters and apply choreography to them. A lot of this is year to year seeing what else I can learn to do something I haven’t done before.”

You’ve got a new resident, Frankenstein, who made his debut the other night?

“Yes, he was probably the most difficult thing I’ve done by far. The animatronic was completely done by scratch. I ended up having to 3-D print certain parts, I ended up welding certain parts. That’s another example of me trying to learn new skills. That sequence also has custom dancing, Frankenstein is tap dancing in one of the windows, that was something that took a lot of time to put together. It’s a crowd-pleaser for sure. I started that about 15 months ago.”

How long does it take to take everything down?

“We can take it down off the front of the house pretty easily, but it takes a few days to get everything packed up. We added 21 pumpkins, we had 40 of them last year so now we’re up to 61. So, it takes time to pack all those up.”

What about the unpredictable weather?

“We have had to cancel, once this year we canceled, another couple of days we ended early. There’s a lot of electrical connections, hundreds of them. We have thousands of lighting elements. Weather can be a challenge, having said that everything I have to kind of design to be as water resistant as possible. Every electrical connection we do, I have to think about can this get wet, if it can’t how can I waterproof it better. Sometimes it’s not enough, even components that are advertised as waterproof sometimes are not New Orleans rainwater proof. We have to take extra steps to put silicon on things, all of the pumpkins have drain holes in the bottom. Little things like that.”

Has anything broken during the show?

“The other night I had smoke coming out of one of the skeletons and it was a motor that burned out while a bunch of people were outside. So I quickly brought it inside, I have spare parts for everything, and I was able to get it back out in about 15 minutes.”

Why do you continue it every year?

“I noticed it really started drawing crowds and I saw it meant a lot to people, I saw smiles on peoples faces, a lot of thanks from the neighbors saying how wonderful it was and how good it makes them feel to have a little distraction from day-to-day life and how they can be a kid again and get that feeling of Halloween. That’s really the reward and that’s why I continue to do it.”

What would you tell the people who come to see your show?

“People always ask how they can help. I say decorate your own house. Spread the spirit, keep it alive. There are some communities where Halloween isn’t as big, and people don’t trick-or-treat anymore. Spread the magic and keep it alive, have candy for trick-or-treaters. If I can inspire a few people to do that, then I feel really good about it.”

What’s better than a scary movie that you can enjoy in the comfort of your own home? While there are a lot of classic horror movies out there, there are...

Put morals where your mouth is: This local farm aims to combine ethics and economical

Local Cooling Farms is a 16-acre property on the Northshore where Kate Estrade and her husband, Grant, raise livestock including pigs, cattle, chickens and goats. They also act as a...