C’Mere is a shop full of small, but fabulous, wonders at the base of Esplanade Avenue

At Remy Diamond’s petite, playfully curated shop, C’Mere, on the base of Esplanade, you’ll find all sorts of wonders and trinkets. It’s the perfect place to go when you don’t know what you’re looking for. I’ve never looked down at my hand and said, “I need a ring with a finger-sized cheese plate to adorn me” but Remy’s shop showed me that that’s exactly what I should have.

C’mere carries a range of products from a few national, but mainly local, hand-selected artists: jewelry, prints, embroidery, masks, paintings, clothing, plants; each creator makes something unique, special, and a bit offbeat. There’s a lot of objects that spark joy inside the walls of this store. 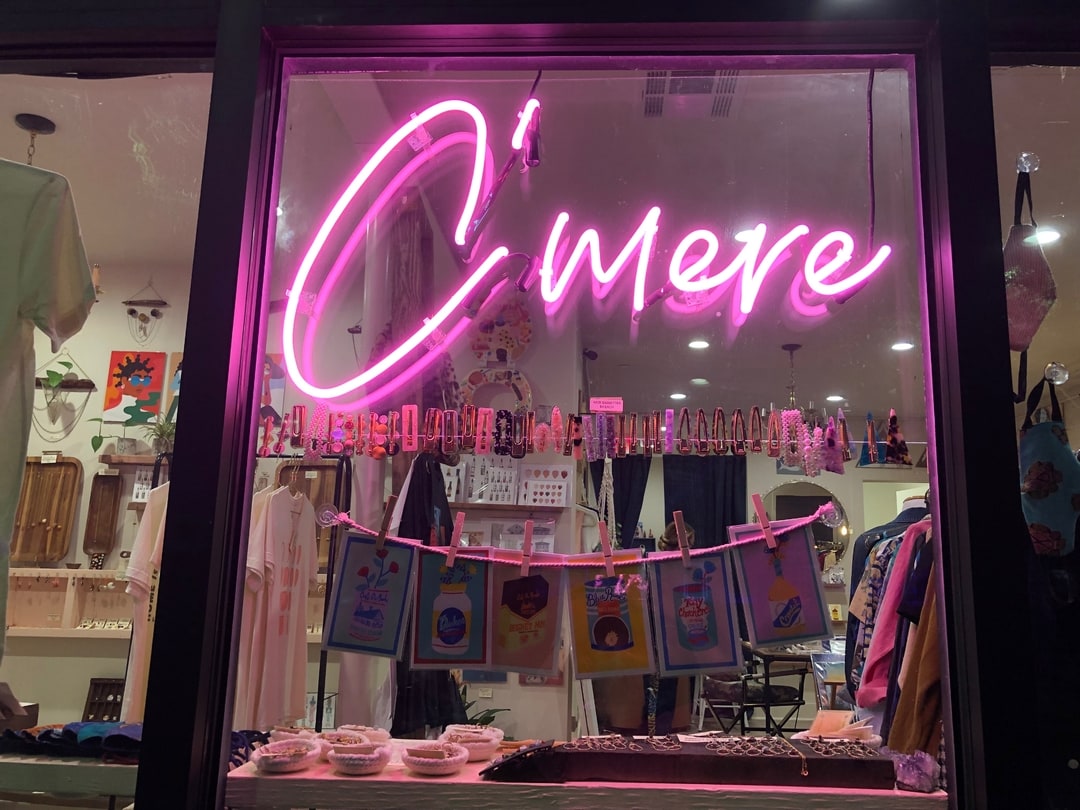 When I go in, in the early evening, to interview Remy, everything is glowing pink, beginning withthe neon sign in the window that beckons you to “C’Mere.” She is where you will usually find her, tending the shop while seated at her workstation, a folding table positioned smack in the middle of the store, covered in clay and tools and her half-baked creations.

She will smile warmly and greet you and answer your questions when you arrive, then let you browse to your heart’s content, knowing that a piece that speaks to you will do the talking, so she doesn’t have to. 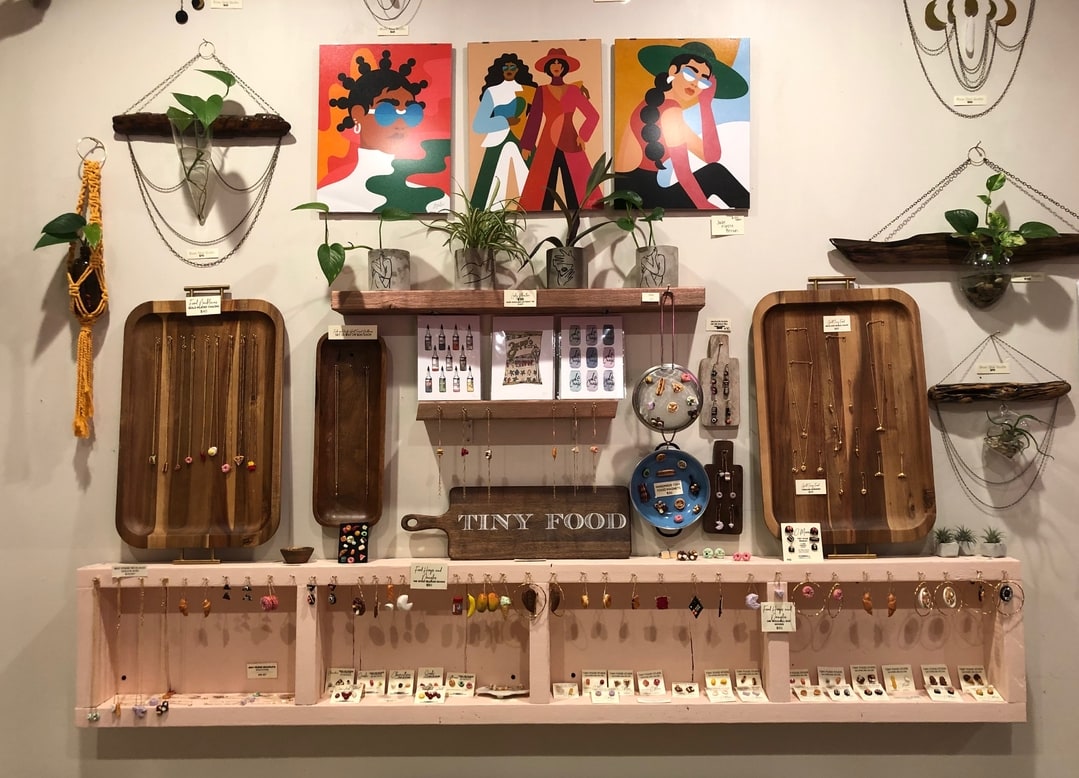 Before Remy Diamond opened C’Mere, a year ago this month, she was selling her wares at the Frenchmen Street Art Market. When I asked her if that’s where she started, she said, “Not at all. I couldn’t get into the market for two years. There were too many people who made jewelry, so I would just set up across the street, in front of the Praline Connection. My friends would joke that it was my office. I’d pull my car up– I had a table in the back. There were three or four of us who did that. I made enough money to support myself. Then, once I started making the tiny food, I reapplied to the art market and they saw it and loved it and finally let me in.”

She is currently slicing the world’s smallest baguette to put on the most minuscule cheese plate and I am astounded that she’s able to make miniature food all day without eating constantly.

“I get so hungry,” she said. “We have my food jewelry, prints of local food art by multiple artists, pipes shaped like food, made by Kate Clark. The other day I was making a whole round of tiny sushi plates, so I had to order it and put it in my mouth too.” 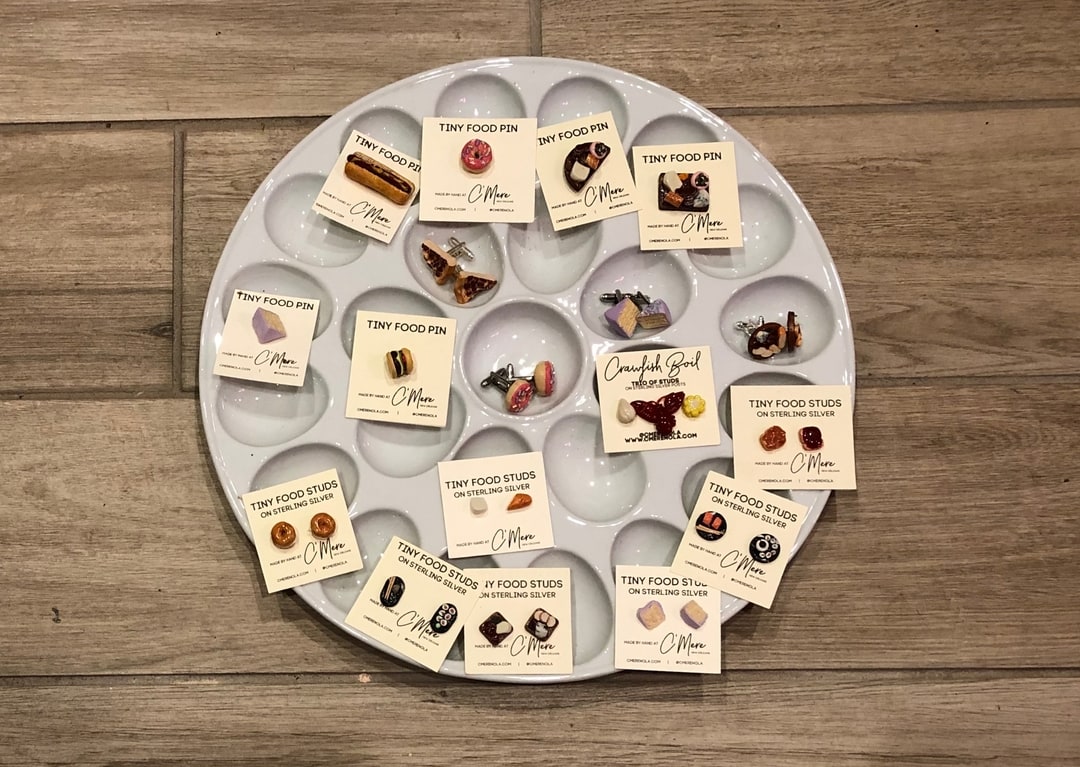 It seems as though there’s nothing Remy can’t make out of clay, but that isn’t the case.

“I’ve been trying to make garlic but I haven’t gotten there yet,” she explained. “Some food doesn’t lend itself to being tiny. Sandwiches do, really well, but something like rice only reads true if it looks just right, so red beans and rice usually doesn’t. I think about the specifics a lot. People will send me pictures of their food for commissions because I want to know what that food looks like to them: is their meat grilled? Raw? T-bone? Maybe I’m envisioning a different kind of steak than they are.”

Anytime you walk into the shop, Remy is elbow deep in tools and clay. She is constantly improving her craft.

“At the beginning, I watched a lot of YouTube videos and I taught myself how to use different materials like liquid clay and chalk pastels that you shave up with a razor to get a fine powder– that’s how I get the crust on a bread or pretzel or pizza,” she said. “I also enjoy making it. Food is so natural and messy, in general. It lends itself to my way of creativity.” 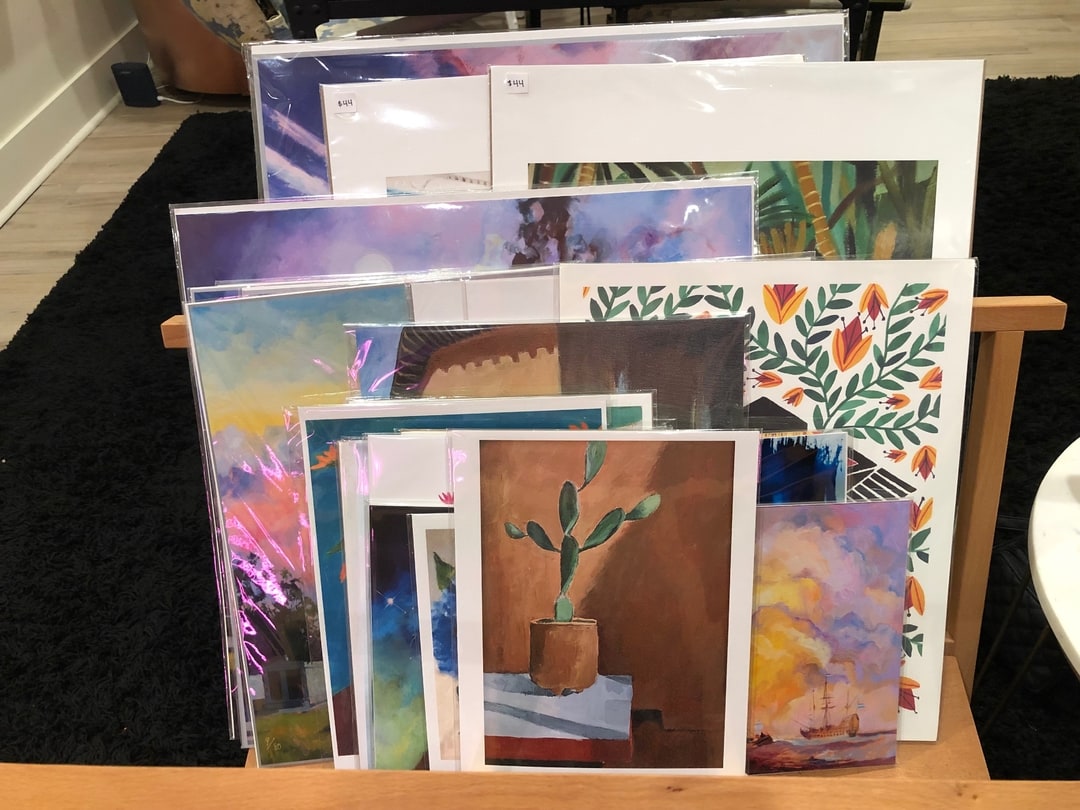 C’Mere isn’t in the most obvious of spots, on 427 Esplanade Ave. It’s around the corner from a nexus: behind the Jazz Museum, two blocks past the French Market, down at the end of the strip of music venues on Frenchmen Street– without looking for it, you might miss it. Like with any hidden gem, it helps to know what you’re looking for.

“At first I was a little concerned about that,” she said. “I was like, ‘Are people going to come down this way?’ And the truth is that the people who I want in the store, they see the chalkboard sign I set up on the neutral ground and curiosity leads them to walk over. They’re like me — when I visit a new city, I’m always on the lookout for the handmade art store and this is that.”

It’s hard to focus on our conversation because there is cool, distracting artwork on every surface of the shop. So, we walk around together and she gives me a tour. 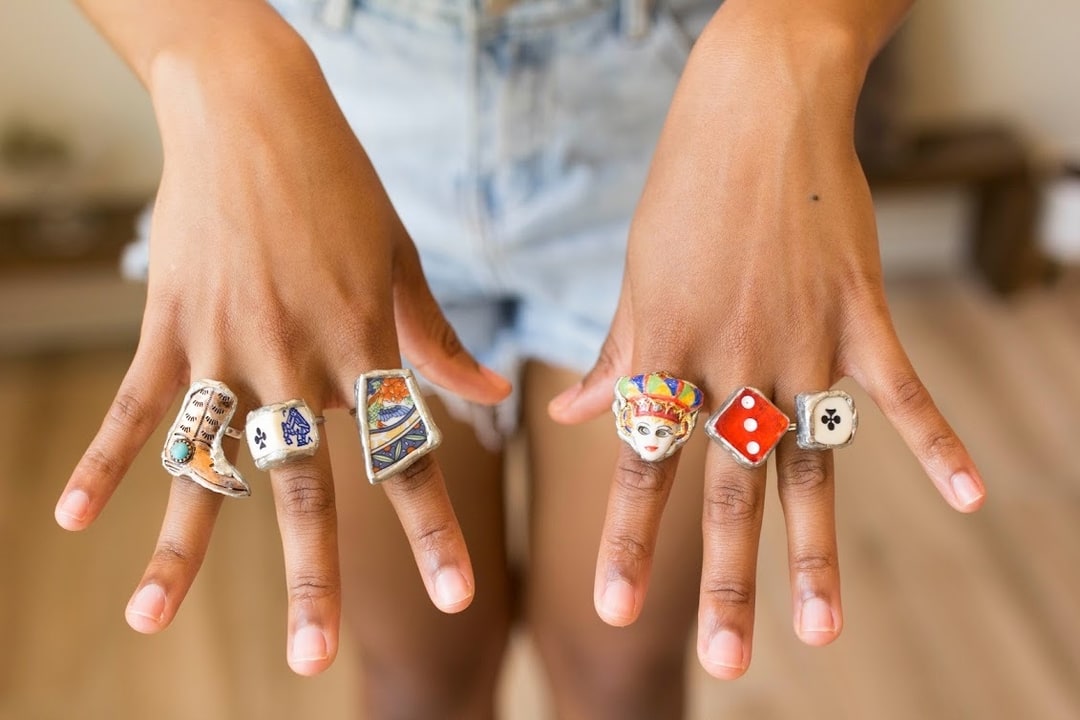 The first thing that I notice is the display of rings made of unusual and clearly recycled objects.

“That’s Sadie [Sheldon]’s work,” she said. “I think the story is that she and her boyfriend were camping and they wanted to play chess, so they made a board with all of these random dice and buttons and toys and things they had laying around. Then she turned her winning piece into a ring. She’s super chill about it and likes giving second lives to things that would otherwise get thrown out.” 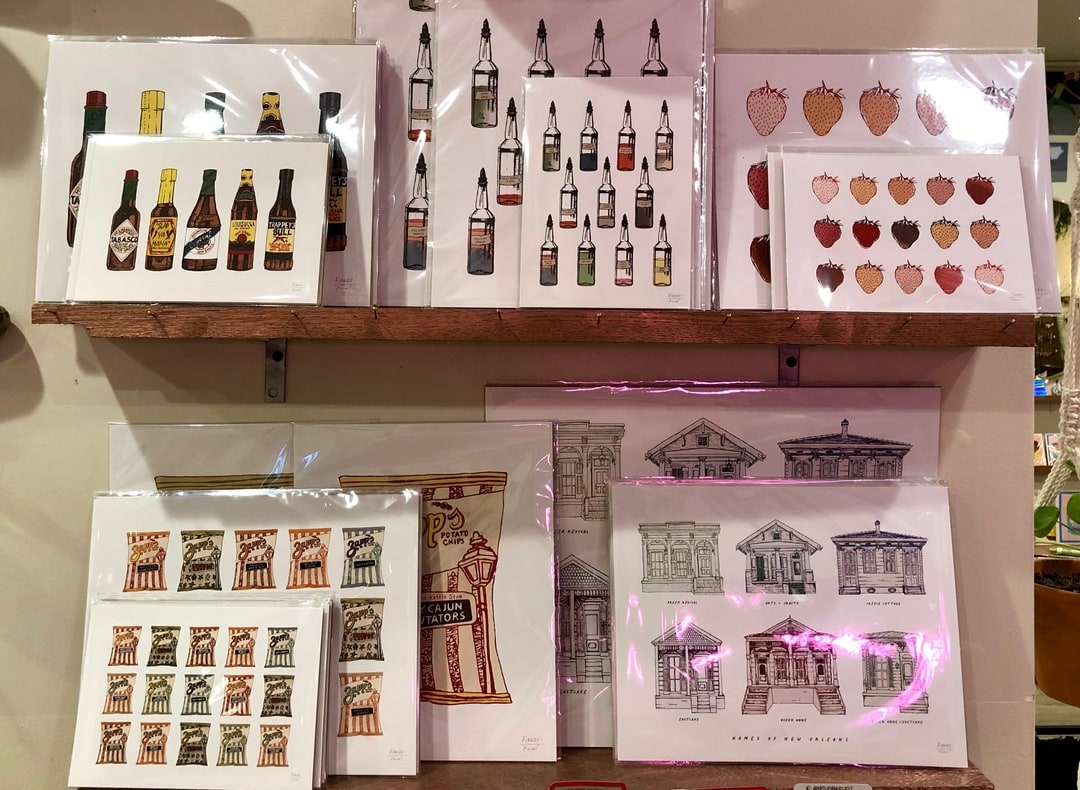 Next thing I ask about is a wall of artful prints of Zapp’s chips, hot sauce packets, and snow cone flavors by Statement Goods Design.

“Alysia and Toni! I met them when we started doing the Dat Dog Art Market together on Magazine Street about five years ago,” she said. “They also make lots of other things like ceramics and candles. Their stuff is all really cute.” 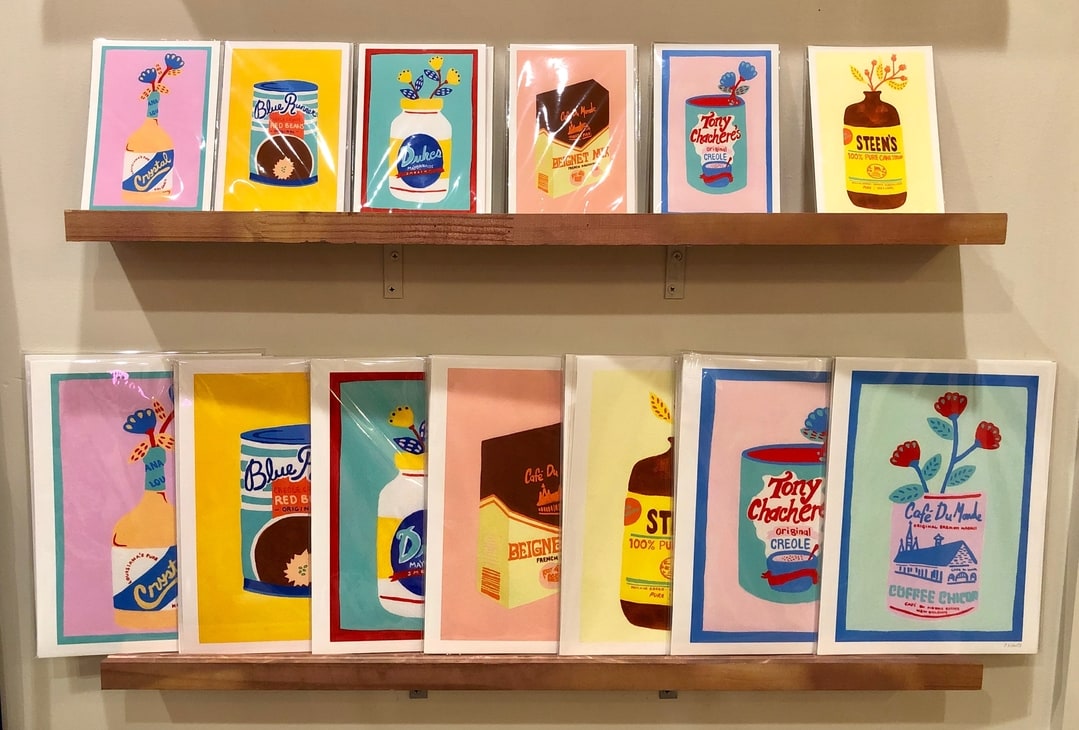 I turn to see another wall of bolder, brighter Zapp’s-themed art, these ones made by Cora Rose Nimtz— they are undeniably happy-making. On the wall next to them are hilarious cards printed and designed by Anna Wilson, from her aptly named brand Sassy Banana. If you’re feeling pun-tastic, Anna’s cheeky, playful cards for each holiday and every day in between will make you giggle. Below those are stickers by Fox and Crow Paper Co. They’re whimsical and shiny and feature magical creatures like narwhals and mermaids and Ruth Bader Ginsburg and Alexandria Ocasio-Cortez. 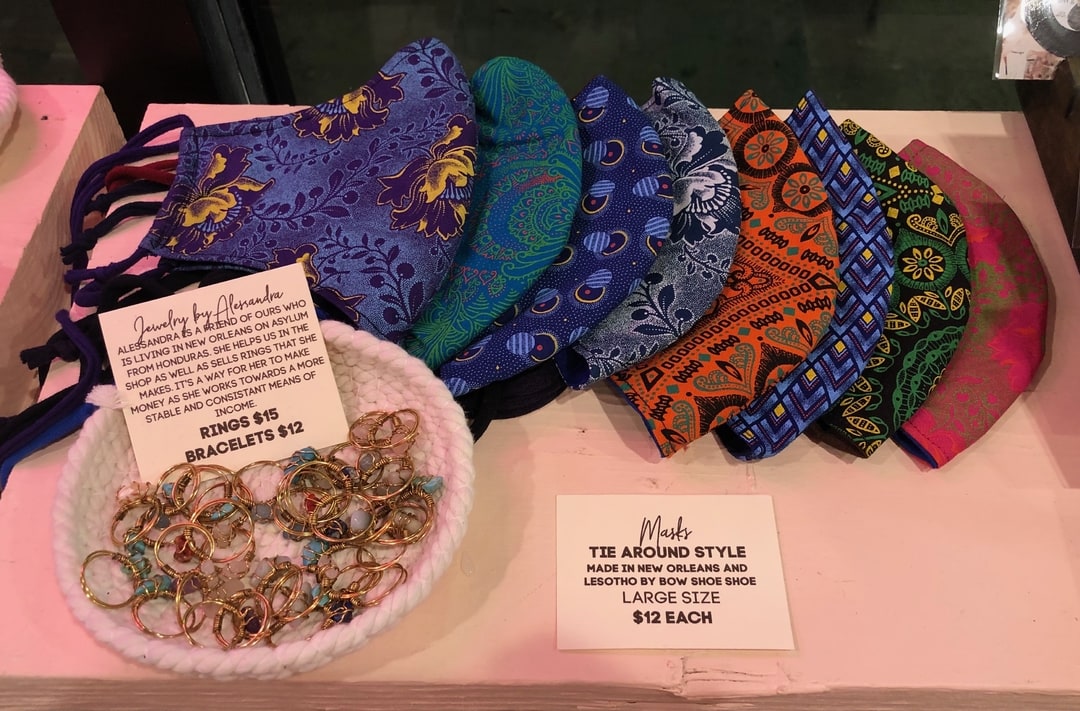 A stack of rings in a dish catches my eye, as they look very similar to the miniature food rings but have gemstones in the middle, instead of eggs and avocados. This isn’t a coincidence. Remy taught the creator, Alessandra, along with several other women who needed extra income, how to hand-wrap metal jewelry.

“That’s been super interesting,” she said. “I met Alessandra and her roommate, Lizzie, about three years ago. They’re these creative Honduran women who are in New Orleans on asylum, as there is a lot of workplace discrimination against the Trans population [in Central America]. I speak Spanish poorly, but conversationally enough to be able to get by, so I was able to teach them how to make these and we’re always stocked with her rings now.” 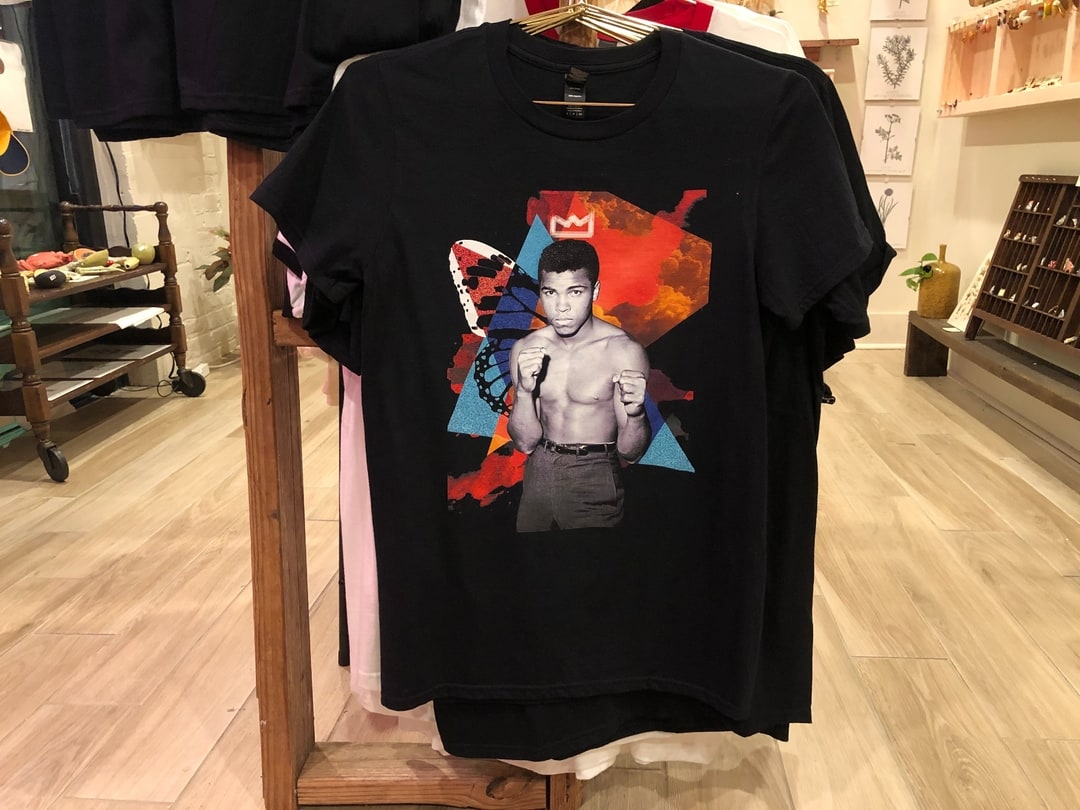 I’m sad to leave the shop. It’s such a warm, colorful place. When COVID-19 restrictions are fully lifted, Remy will be doing workshops and events and I do not doubt that they will be packed again. Until then, they’re open several days a week, always on weekends, and their inventory is regularly updated and can be ordered directly through their Instagram or website.