Calling everyone who wants delicious New Orleans food in their bellies, but isn’t able to get it at the moment!

I know, I know. There are a lot of people in this number. Maybe you decided to quarantine someplace other than New Orleans, and you need the taste of Cajun and Creole cuisine. Or maybe you’re opting to avoid restaurants for just a little while longer.

Whatever your reason, 24 hours without gumbo, jambalaya or an overstuffed muffuletta is far more dire than a similar stretch without that proverbial “apple a day.” Here’s how we fix this problem.

As a lover of all things food, and keeping my social distant, I know there is a ton of ways to get food delivered. But Goldbelly has to be one of the most fun websites I’ve been on in awhile. Goldbelly is an online marketplace that connects you to some of the most delicious and exciting regional foods from across the country.

What’s the difference? Shipping and stocking up.

Some arrive ready to eat. Some come frozen and need to be heated. And others are shipped deconstructed and require a few easy-to-follow steps. But you’re getting the goods. Let’s look at some of the local spots.

The lower half of the French Quarter was known as “Little Sicily” in the early 20th century because the neighborhood was dominated by residents and businesses with origins in south Italy’s famous island. One of those businesses was Central City Grocery — founded by Salvatore Lupo.

Lupo’s most lasting contribution was the invention of one of New Orleans’ favorite sandwiches: the meat, cheese and olive salad-stacked muffuletta. The sandwiches arrive in a temperature-controlled box so you can eat them straight-away or pop them in the fridge.

If you’re an olive salad fan (so many are), you can even have two quarts shipped to you ($54). 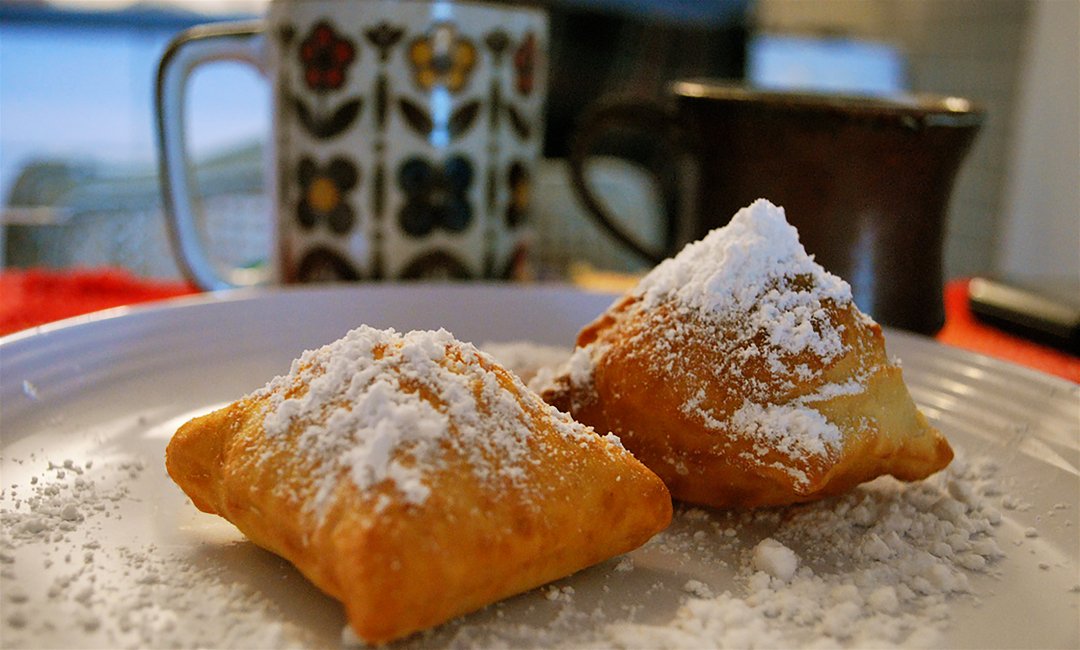 New Orleans is a city full of iconic food and beverage options. There is perhaps none more iconic, however, than the beignets you’ll find at Café du Monde. The shop has been open since 1862 serving those famous French-style doughnuts and the New Orleans-famous dark-roasted chicory coffee.

Both items ship in boxes of mix with instructions on how to recreate them. You can order just the beignet mix ($19), or the beignet mix and the chicory coffee mix ($29).

Po’boys have been a steady part of New Orleans diets since they were invented during the streetcar strike of 1929. And I’ve yet to meet a New Orleanian who didn’t have Parkway Bakery & Tavern po’boys in their Top Three. They’re that good!

This roast beef po’boy from Parkway will arrive at your door cool and covered in ice packs. It’ll be deconstructed, so you’ll store it in your fridge and then follow the detailed instructions on how to assemble them.

The eight-person meal doubles everything. ($179)

The doberge cake is a beautiful confection with approximately eight layers of cake and icing. It was created by New Orleans’ very own Beulah Ledner in the 1920s. She sold her shop to a man named Joe Gambino in 1946 and that bakery is now known as “Gambino’s Bakery” — the home of the doberge cake! They’re famous for a whole lot more, as well — including their king cakes (which require some minor icing assembly if purchased on Goldbelly).

Gourmet Butcher Block is a Cajun meat market that became famous when it introduced football celebrity John Madden to the mighty Turducken. What is a turducken? Oh, it’s just a chicken stuffed inside a duck stuffed inside a turkey.

I think Gourmet Butcher Block’s offerings include some of the best local deals on the website! You can order the All-Madden Turducken which serves 20 – 25 people ($139), four stuffed chickens (each serves four people) with your choice of stuffings ($119), a Cajun Combo Pack that includes a shrimp etouffee-stuffed chicken, two sausage-stuffed pork chops and a quarter of chicken & andouille gumbo ($89), and the extraordinary Cajun Holiday Gift Pack ($159).

I know, I know. $59 for a dozen cookies isn’t cheap. You can get cookies for much less at the grocery store. But did the grocery store win Outstanding Pastry Chef at last year’s James Beard Awards?

No, I didn’t think so. Chef Kelly Fields did, though, and that’s the level of cookies you’re going to get!

This Garden District institution has launched the careers of culinary greats such as Paul Prudhomme and Emeril Lagasse. The current executive chef, Tory McPhail is a James Beard Award-winner, himself, who balances innovation with some amazing signature dishes.

Aunt Sally’s began selling their famous pralines in the French Quarter in the 1930s and the shop is still going strong! You can buy them on Goldbelly by the dozen in a variety of flavors, including Classic, Bananas Foster, Chocolate, and Café au Lait (each for $39).

This is another situation in which the larger quantity you purchase, the less the price per unit becomes. A box of 50 classic pralines costs $69 while a box of 100 costs $119.

A post shared by Maurice French Pastries (@mauricefrenchpastries) on Dec 20, 2018 at 7:57am PST

Maurice’s king cakes are consistently rated among the most popular in New Orleans — earning the People’s Choice award at 2016’s King Cake Festival. The French-style king cake is a beautiful blast from the past and features rum-flavored frangipane inside a buttery puff pastry. The traditional king cakes — utilizing brioche bread — is also a hit.

It’s no secret I love Cajun Country. While not New Orleans, it’s close by and if you’re not craving boudin, it’s probably because you’ve never tried it. (So you need to try it.) And some say Comeaux’ has the best boudin in town

So get your fix with some New Orleans fare or scour the Goldbelly website to see what culinary creations other cities are offering. If you go with an out of town choice, make sure you’ve got a bottle of hot sauce nearby just in case!