On a block with a unique history, Dr. Bob is ready with stories, art and education for those willing to listen

Published on Thursday, May 9th, 2019
by Mary Staes

The Bywater is changing. Where old railroad tracks were once alone, now Crescent Park sits next to Chartres Street. The New Orleans Center for Creative Arts school has expanded its campus and shares a parking lot with the Bywater American Bistro. Bacchanal’s is the date night hot spot.

“It’s like SoHo,” said Bob Shaffer, better known to most in the area as Dr. Bob. His signature, along with the golden rule of “Be Nice or Leave,” can be found on paintings in almost every business in the city.

When asked how he came to embrace the saying, he said he heard it when he was young.

“Running around in juke joints and honky tonks underage,” he said. “That was the rule. If you can do that, you can go anywhere.”

Dr. Bob’s studio has been a staple of the Bywater area since the 1990s, and his block has a storied history.

“Here in my yard, Jean Lafitte had a hideaway shotgun house that got destroyed,” he said. “I have the front of it, I saved it after all these years.”

When the rules of boxing were changed to make gloves mandatory in the 1890s, the story can be tied to the space Dr. Bob’s studio occupies. In the 1880s a sporting venue called the Olympic Club stood on the entire block and hosted a fight that changed boxing history.

Shaffer was born in Kansas, but spent most of his time here after his father got a job working at the Michoud NASA facility in New Orleans East. By 16, he had his own apartment in the French Quarter.

“On Esplanade Avenue, across the street from Buffa’s,” he explained. “Sixty-five bucks a month and the utilities were paid, and I had a balcony. I worked at Hubig’s back then.”

Listening to Dr. Bob speak is enthralling. It’s like getting caught up in a tornado of living history and things that “ain’t ‘dere no more”, and trust me, you don’t want to interrupt his train of thought. In fact, interruptions are what brought his paintings of “Be Nice or Leave” about. 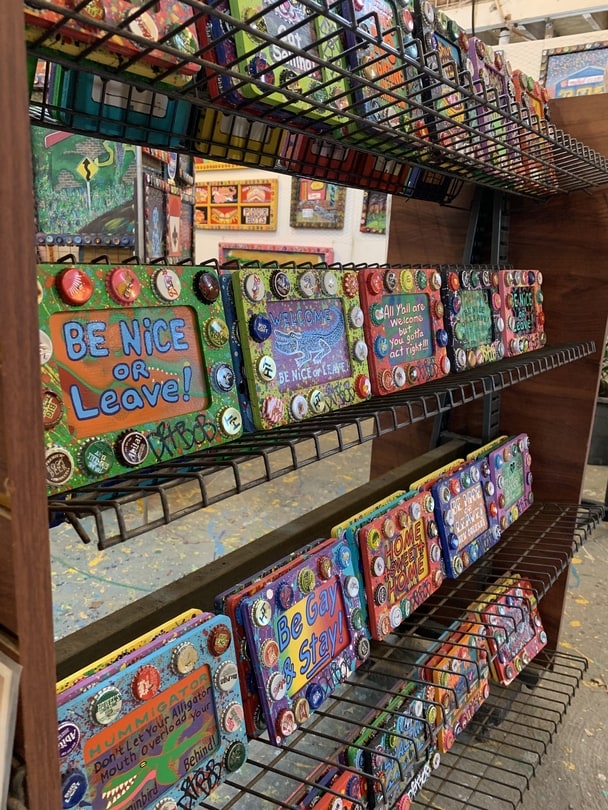 “I had a studio, and people started aggravating me down there by Jackson Square, looking for a place to piss or bum a cigarette,” he explained. “They come in my studio and I’m using power tools. Don’t bother a person using power tools! So I put a ‘Be Nice or Leave’ sign and point to it when they’d interrupt me. Well, people kept stealing them, so I thought, ‘I’d better start making them.’ That’s how that happened.”

Like many people of a certain age, Dr. Bob hates people who sit and stare on their phones.

“When people come here to visit our city and they’re so busy standing there looking at their phone I don’t want to even engage in conversation with them,” he said. “I ask them to leave. Be nice and leave, because I don’t like being treated rudely in my own business, or ignored or talked over when people try to ask me a question and I’m trying to tell them something. I don’t have time for them anymore because they’re all about themselves.”

Shaffer’s art is anything but selfish. In fact, he’s an avid proponent of giving. Giving education when you look at his art, giving knowledge when you listen to his stories, and even giving of his own artwork for charity.

“That’s important, to give,” he said. “You don’t have to give your time if you don’t have it, but it’s nothing for me to paint a painting, and give it away if that’s going to help a kid that needs a procedure that their parents can’t afford.”

He choked up while recalling a story to me of a friend who called him to tell him about a brain tumor she had. For Shaffer, donating to help her wasn’t even a second thought.

“She’s got a scar from the bottom of her neck to her forehead, but she survived,” he said. “I don’t know if it was the $500 drop in the bucket that rippled out and touched my friend, but it touched me. I never would have thought in a million years the donations would come full circle and involve me.” 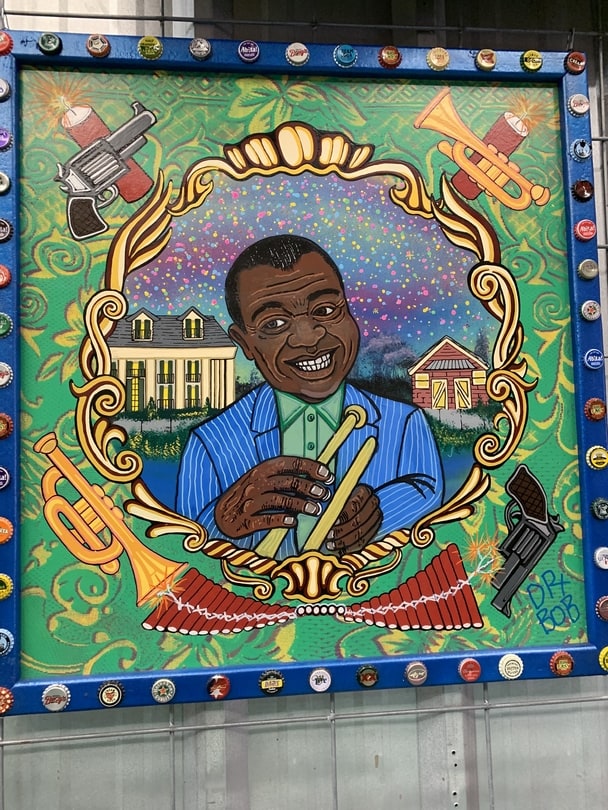 When we talked about the evolution of his neighborhood, Shaffer said it was important to know your history. His studio boasts depictions of local legends, like Louis Armstrong, Ernie K-Doe and the Dixie Cups. Each portrait has four corners with different things connected to the subject.

“The snakes around the Dixie Cups, people ask me, ‘What’ve snakes got to do with going to the chapel and going to get married?’” he said. “I say, well you probably have never been married, have you? I go to these places that I paint and I get my feet dirty, and I find out from people that are still alive stories about things that are still going on. And then I bring them back here in my mind and whip em out with the spray paint, house paint, whatever I can get my hands on. It’s important to record history. This neighborhood has gone to hell in a handbasket so fast, I don’t think anyone is writing it down.”

He then recalled a story another story about giving, when he talked to a group of kids who were taggers and gave them new painting techniques on how to make sun rays behind figures.

“I hate the graffiti artists that don’t know nothing but bubble letters,” he said. “I taught these kids a trick this morning, how to use spray paints. I said, “Man, I was 45 years old before I figured this out. Just turned the can upside down, simple. If you’re gonna go do it, learn some cool techniques. It breaks my heart to see buildings in the Quarter getting tagged. Stuff that you can’t fix.” 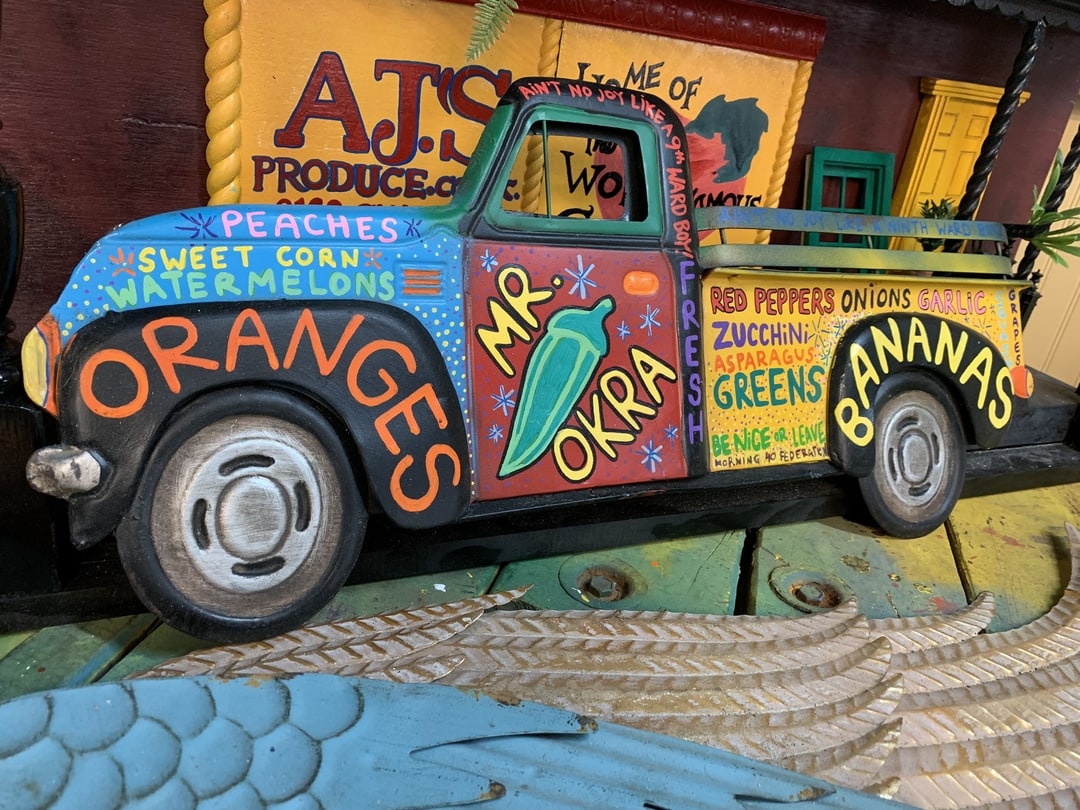 Shaffer said by giving your art away, you never know who might see it.

“Donate your art,” he said. “You can make more art but you’ll never make any money looking at your phone. I didn’t think mine was worth a damn and people get in bidding wars. That way, it’s a unique way to get your art out to people. Little church fairs, anything. It doesn’t have to be big, something small, it won’t kill you. You don’t know who is buying that, you don’t know where it’s going. You have people all over the world sending me pictures of ‘Be Nice or Leave’ signs that I’ve donated.”

When asked about his iconic signs being a part of the fabric of the city, Shaffer says it wasn’t intentional.

“I never meant to be,” he said. “I make people cry. I don’t know what the hell that’s all about. A girl sat here and I was explaining something to her, and she broke out crying. A black girl from up North. She said I can’t believe you know all this. I said it’s the truth, and when you’re telling the truth, it’s really easy, cause you don’t have to make up BS. You just tell the truth.”

Want to know other cool spots in the Bywater? Click here for our neighborhood guide.