We told you where the wild things are. Here are the more traditional choices.

We got a little crazy in here the other day, tossing around goat cheese king cakes, taco king cakes, sushi king cakes, Elvis king cakes. Whatever we could get our hands on, really.

And I regret nothing. I think the wild and the wacky (and also delicious, by the way) are a welcome addition to king cake seas–…I mean Carnival season.

But I’m also not saying we should only have the wild and wacky. I’m not a purist, obviously, but I know we need those traditional king cakes. They set the standard!

And, let me be clear: traditional king cakes are delicious, too. If I walk into a Mardi Gras party and there’s a beautiful brioche cake, covered in icing and colored sugar, you’d better believe I’m eating it! (Not all of it, but — by way of sneaking medium-sized slices as I walk by every five-to-10 minutes — pretty close to all of it.)

Have you ever seen those horizontal bar graphs of the history of the planet? The full bar shows the entirety of the Earth’s history, but then at the verrrrrrry tip it’s a different color — and that different color is meant to show the length of humanity’s existence in the world. We’re meant to see how humans — even though we’ve been around for 200,000 action-packed years — have only walked the Earth for the teeniest, tiniest fraction of our planet’s journey. 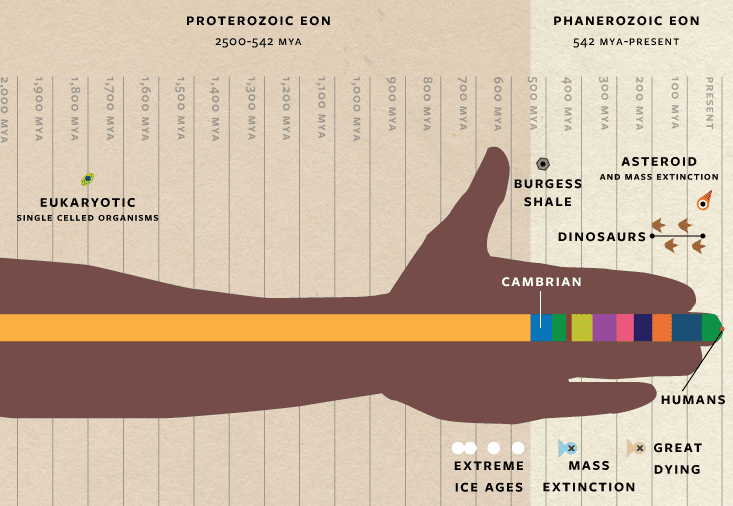 As early as 217 BC, Roman kids were drawing lots during their Saturnalia festival around the winter solstice. Whoever drew the lot with the bean was (drum roll, please) King for the Day!

The first record of a bean being placed in a cake during Epiphany (aka Twelfth Night) to determine King for the Day was in France, sometime around 1300 AD. By then, England had a similar dessert — they called it “Twelfth Cake” — and whoever found the bean was called “King of the Bean.”

Early versions of king cake made their way around Europe and took on different forms. In northern France, for example, the galette des rois became popular.

In southern France, a ring-shaped gateau des rois — made of brioche, candied fruit and sugar — was the preferred choice.

As you can see, this southern version more closely resembles what is most commonly found in New Orleans these days. Why? Well, as it turns out, we were just getting a lot more French immigrants from the South than the North.

It’s said the tradition was first brought to the Gulf Coast in 1718 when Basque settlers (from way-southern France) began arriving in the area. As Carnival increased in popularity with the formation of krewes and masked balls in the second half of the 19th century, king cakes began to take on a larger role in the celebrations. This is when the Krewe of Rex came up with the purple, green and gold color combination that would eventually find its way onto our cakes.

By the 1950s, the king cake became an irreplaceable fixture in Carnival celebrations, which is when New Orleanians began to turn to large-scale bakeries to handle their Mardi Gras baking needs. (More on this later.)

But, here’s the kicker: King cakes weren’t really being filled until the 1980s!

So let’s take a minute and celebrate the oldies but goodies. The kings of king cake. The titans of tradition. The greats of the gateau des rois. The…OK, I’ll stop there. And, without further adieu, here they are!

Sam died in 1988, and — in 1992 — Manuel’s son, Manny, Jr., opened Randazzo’s Fine Cakes and Pastries in Metairie. He moved the shop to its current location in 1998 and renamed it Manny Randazzo King Cakes, which is the same name it holds today.

Over the years, their moist, braided brioche king cake — topped with a generous layer of white icing and Mardi Gras-colored sprinkles — has developed a passionate following, so much so, that Randazzos only needs to open their shop during Carnival season.

For you out-of-towners, overnight shipping is an option! So don’t let Carnival finish up without checking out (or reminding yourself) what all the fuss is about!

Fun fact! When Lloyd Haydel purchased the Sunny Flake Donut Shop on Jefferson Highway in 1959, his intention was to turn it the area’s first trampoline center.

Actually, that’s kind of a near-disastrous fact. I mean, I love jumping on trampolines as much as the next 36-year-old, but I like eating Haydel’s king cakes way more.

Fortunately, the trampoline center quickly reverted back to a donut shop and everything was right again in the world. Then, in the 1960s, after Hurricane Betsy leveled the store, the family decided to rebrand as Haydel’s Bakery, and expanded their inventory to include items outside of donuts such as — for one example particularly relevant to this article — king cakes!

You know you have been counting the days. Well it's finally here!

The bakery is now run by its third generation of Haydels and is the same brioche cake — known for its sweetness — that 55 years of New Orleanians grew up eating.

You can get it in Jefferson Parish (4037 Jefferson Highway), or swing by its newer Haydel’s Bake Shop location (3117 Magazine Street) where it will also offer items in smaller sizes.

It’s about as basic as a king cake can get these days. No cinnamon in the dough. No filling. No icing. Just a whole lot of purple, gold and green sugar caked onto the top of the ringed pastry. It’s plain to my tastes, but — to many New Orleanians — it’s the standard.

It’s also one of the oldest king cakes around, and for years was synonymous with the Carnival treat. But Mckenzie’s Bakery wasn’t founded by a McKenzie at all. It was actually founded by Daniel Entringer, way back in the 1920s. His chief baker — and eventual partner — was Henry McKenzie, and their original shop was on Prytania Street, home to today’s Creole Creamery. (You can still see the neon McKenzie sign outside the shop!)

It was actually Donald Entringer Sr. — son of the original owner — who introduced the practice of hiding plastic babies in cake. He was approached by a traveling salesman who had a major surplus of dollhouse-sized porcelain dolls. The salesman suggested Entringer hide these inside the cake, and the bakery owner loved the idea.

Eventually, they ran out of the dolls, so he went to the French Quarter and found an importer with the tiny plastic babies we know so well today, and they’ve been used ever since!

McKenzie’s closed in 2000, but you can still purchase their king cakes today! The recipe was purchased by Tastee Donuts, and you can buy a cake at any of their locations, including the Esplanade Avenue shop.

The history of Gambino’s king cakes actually starts with another cake. In the early 1920s, Beulah Ledner — mother to famous Mid-Century Modern architect, Albert Ledner — invented the multi-layered Doberge cake. Her cake was so popular among college students and Uptown residents, that — in 1946 — her bakery was purchased by entrepreneur, Joe Gambino.

He expanded his bakery, both, in terms of locations as well as the types of goods he sold; and his king cakes became especially popular around Carnival season.

it's the most wonderful time of the year.. 💛 #gambinosbakery #kingofkingcakes

More recently, Hurricane Katrina damage forced the bakery to close several locations, but they still serve the New Orleans area by way of their Metairie shop (4821 Veterans Memorial Boulevard), as well as through the King Hub in Mid-City (4800 Canal Street)!

As far as the traditional shops go, Gambino’s has some of the widest variety of king cake flavors. They changed from bread dough to a Danish dough in the 1980s, and — at that point — they decided to use the same fillings that made the bakery’s Danishes so popular. Today you can buy a king cake plain, or with piped-in fillings as varied as almond cream, Bavarian cream, chocolate cream cheese, blueberry, pecan praline, and more!

We have one week of Carnival to go, and so many king cakes to choose from! You know where to get the wild ones, and now you’ll have no trouble finding something, ummm, steeped in a little more history, either. Good luck!