Gresham says, to the best of her knowledge, she’s the first Black female tattoo artist

“Anytime you do anything, it should be an artform.” – Jacci Gresham, AART Accent Tattoo

These days, it’s hard to feel like an original. How do you put a melody on top of chords in a different way? Solve an equation that hasn’t been solved? Mix a color that hasn’t been mixed? Write a new sentence? Discover a place or a food that isn’t already all over the internet? It’s tricky. Most things have been done, the groundwork has been laid, so the goal becomes to create and experience things that are as unique as possible, to you.

This is where getting a tattoo can come in. A good tattoo is designed by a great artist who is creating something, by hand, for you. There is no limit to how detailed, how personalized a piece can be. A tattoo, even if it’s a basic one chosen from a flash sheet, will look different on your skin than it will look on anyone else’s. You choose where it goes, what size, what memories you associate with the image, how you feel about that part of your body, which shop you get the work done in, by which artist, and on what day. 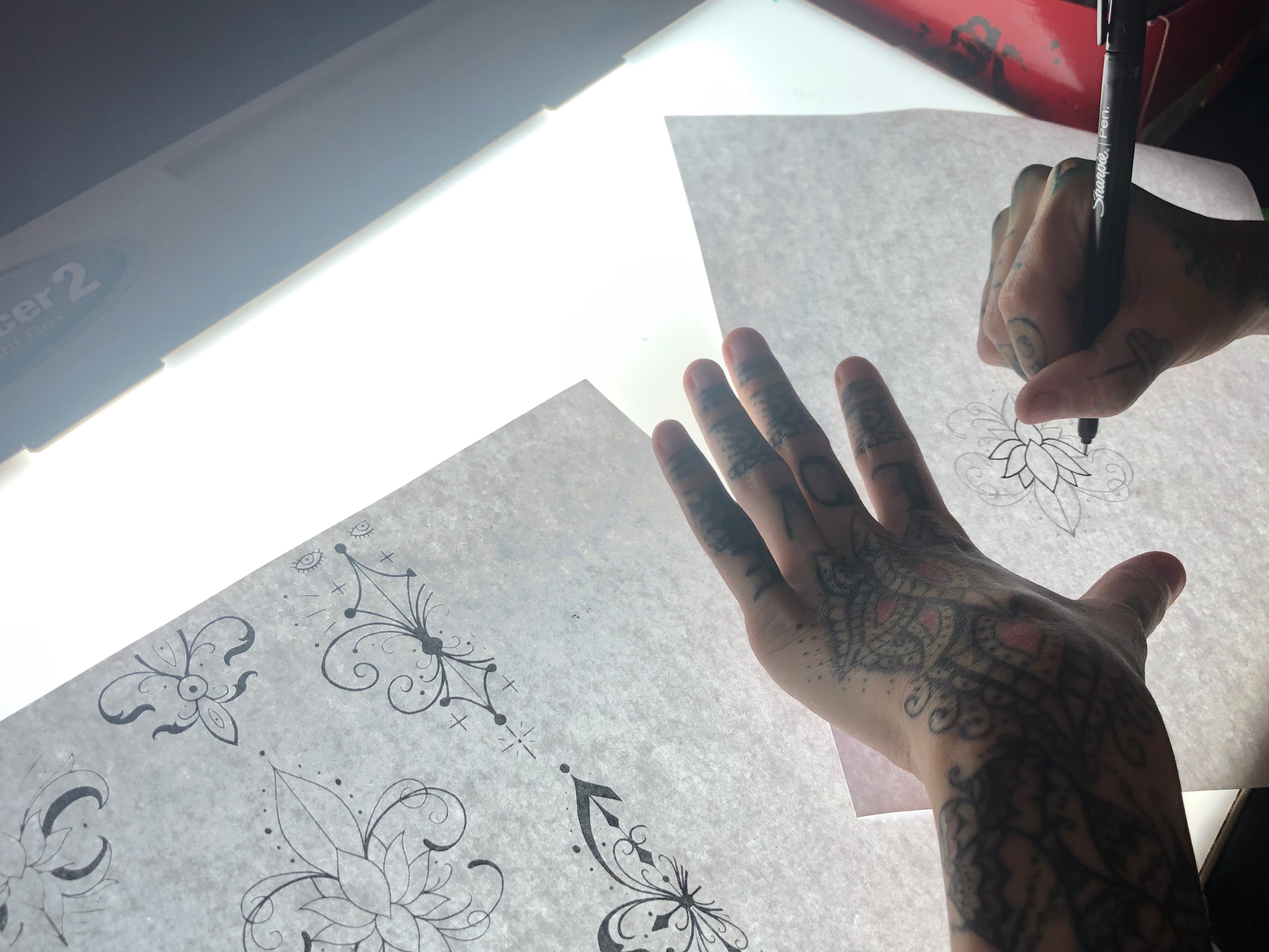 In Indonesia, I had an ankle piece done at the Karma House Tattoo Temple where there was a water ceremony performed and an intention set before the inking. I rented a motorcycle to ride across town to the shop. I brought my artist a design I had created, from sketches I had done of local flowers. He put his own spin on the piece and we worked in silence. I left with an incredible feeling, as half of the proceeds from the transaction went to a local charity focused on ocean cleanup. The next day I left the island and flew to Australia. Now, when I look at my ankles, instead of being reminded of old injuries, I see those new memories.

I wanted my new tattoo to be as special, as unique to me, so, this month, I had the honor of being tattooed at AART Accent Tattoos by a close friend, Erica Wedge, and getting to spend time with the owner of the shop, Jacci Gresham, an absolute legend in her field. When Jacci opened her place nearly half a century ago, there were less than half a dozen female tattoo artists in the U.S. and even fewer African American artists. It took decades for that landscape to shift. 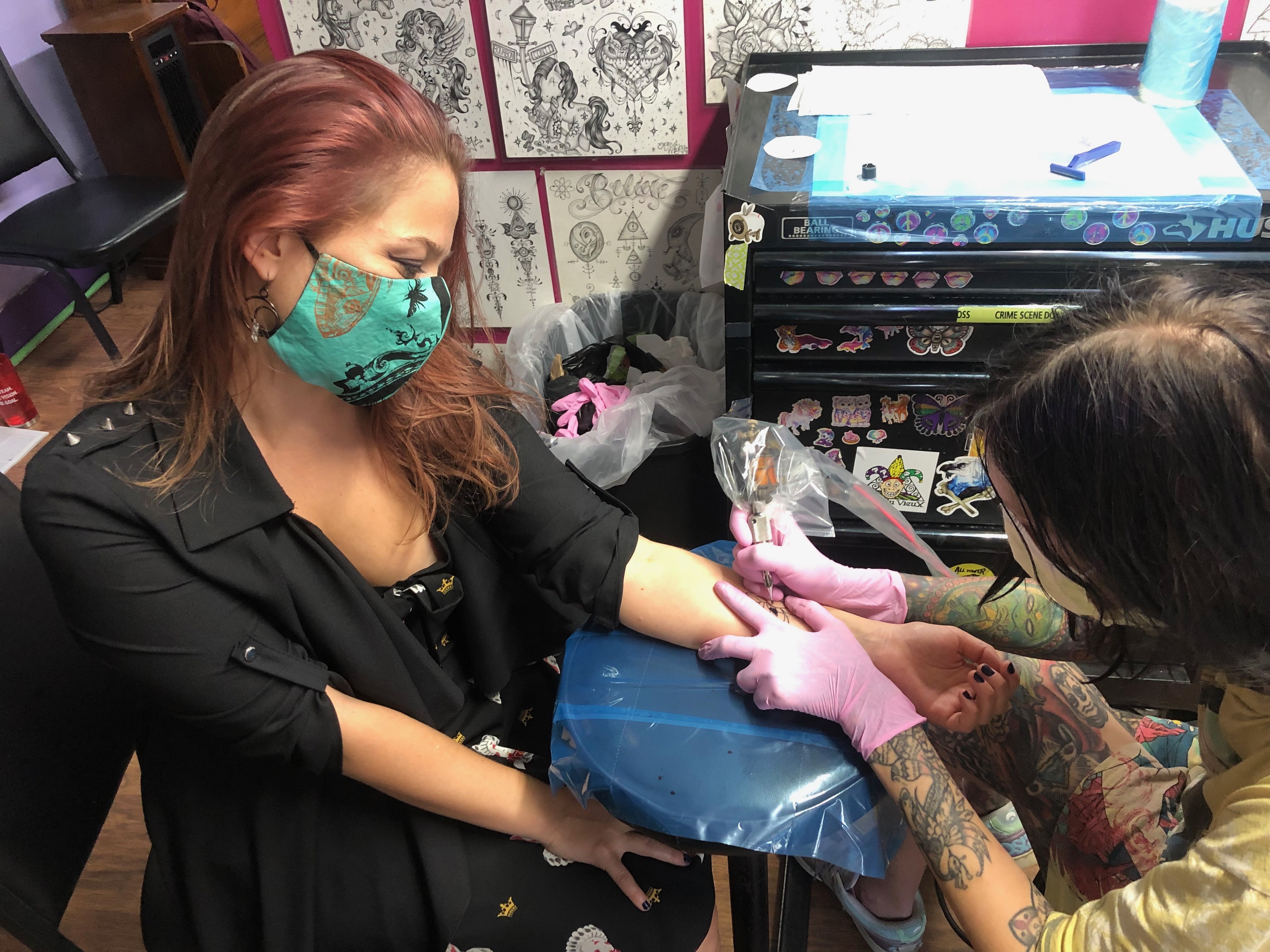 When I arrived, Jacci handed me a mask she had hand-sewn and settled in to speak to me about the evolution of the industry and the artform.

Tell me about the origins of the shop.

“We started the shop in ‘76, right after Mardi Gras. It was a quarter of the size it is now. Just that front entrance, when you come in, that’s all there was. We had one main artist and I was learning to tattoo. Tattoos were pretty simple back then but I didn’t know how to do it at all. It wasn’t hard to learn. Tattoos were roses, hearts, eagles, banners, maybe a black panther, something like that. If you were doing a cover up, it was gonna be a reaper, more than likely, or a skull. Skulls aren’t as popular today. But that was all we used to do.” 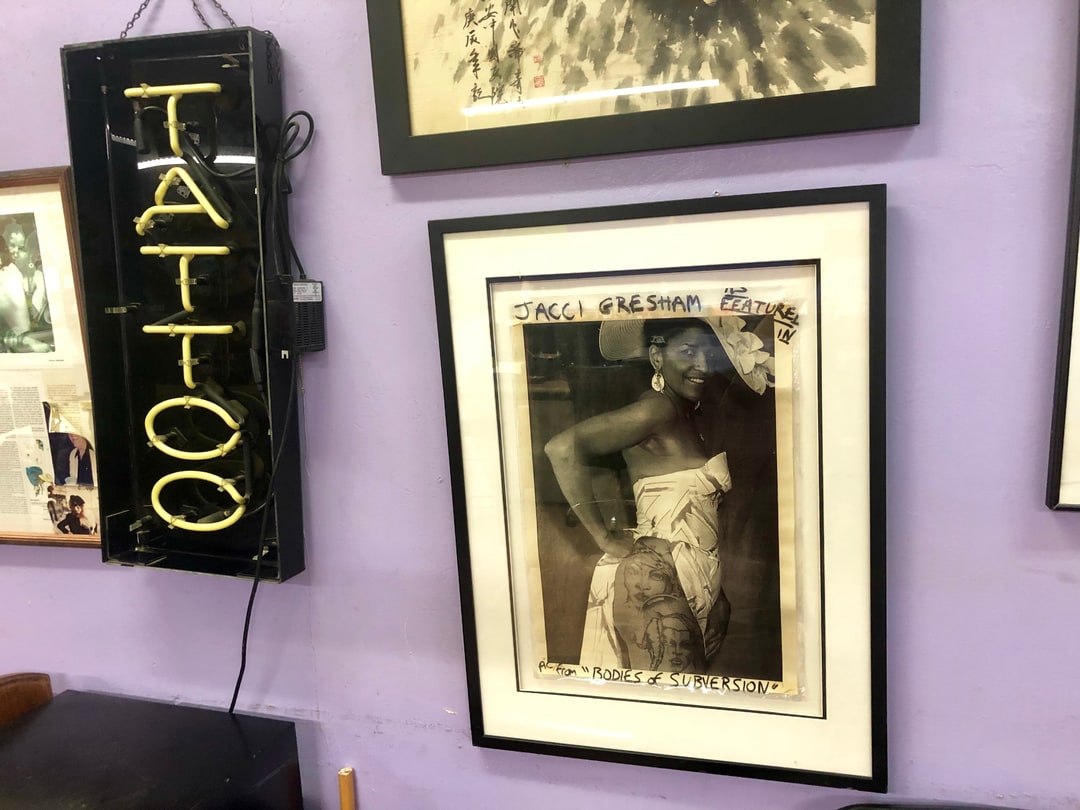 I’d imagine the neighborhood has evolved as much as the industry has.

“The neighborhood is constantly changing [along N. Rampart, in Tremé]. It was predominantly Black back then. You had a lot of local families. Now we’ve got a gay population, a lot of couples from the North, bars, hotels. It’s hard to find a family that’s been here even as long as I have. I’ve been here for 45 years. I did not plan that. I didn’t plan on tattooing either. It’s all been God’s will. [On N. Rampart itself] we’ve got so many parades going on, right past the shop: second lines, all of that. In regular times, I don’t need to go anywhere. It comes to me. I miss that these days.”

Can you talk about the art of tattooing? 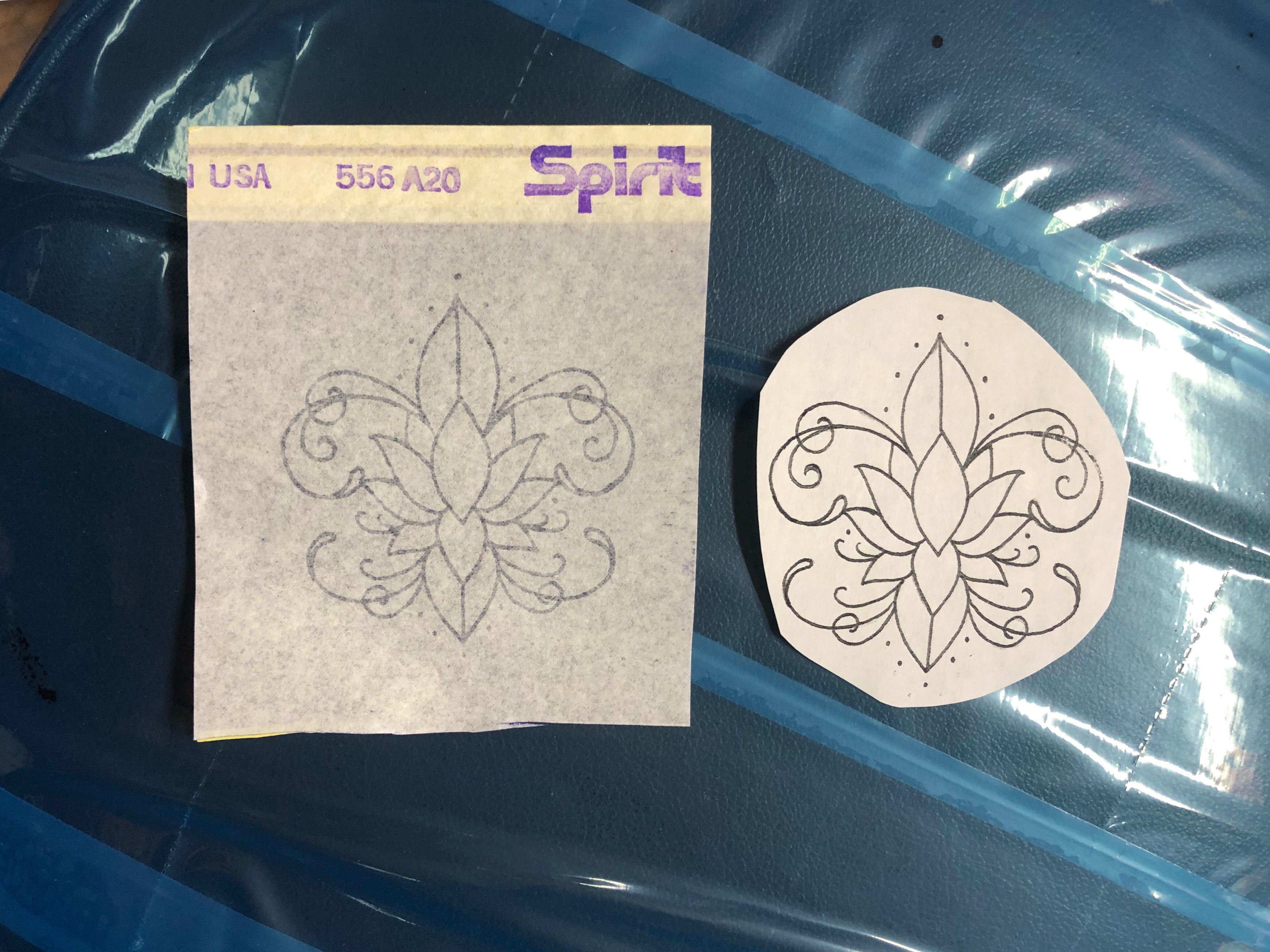 “When I first started tattooing, artists didn’t seem to be too enthusiastic about the art part. They were enthusiastic about making the money. There was no Erica-level art. A rose would be red and green and that was it. When I got into business I put about five colors into a rose. I would highlight it with pink and a little yellow in the center. The stem would be green highlighted with yellow. Tattooing is, can be, should be an artform. Anytime you do anything, it should be an artform.”

I’m so excited about working with Erica (Wedge) on my new piece.

“Hopefully tattoos give people a good feeling. I don’t think I’ve ever seen Erica do the same tattoo twice and I’m impressed. She’s skilled and I like the idea of working together with your artist. The design is part of you, gonna be on you, so you say your part and then you get the input of the artist actually doing the tattoo and I think the two work well together. Back in the day, anyway, you got a tattoo because you were telling people you were an individualist. I think that’s what people are still saying, ‘I’m doing something that hopefully no one else has got and this is to let people know I’m not the same as everyone else.’ I like drawing in front of people and I like asking for input. Most of the time people don’t have anything to say, but whether you’re an artist or not, it’s your tattoo, so you need to speak. Even if it’s just a little something, it makes it you.”

That seems surprising to me, that you’ve been at it for 40+ years and you’re still open to other people’s ideas and suggestions. 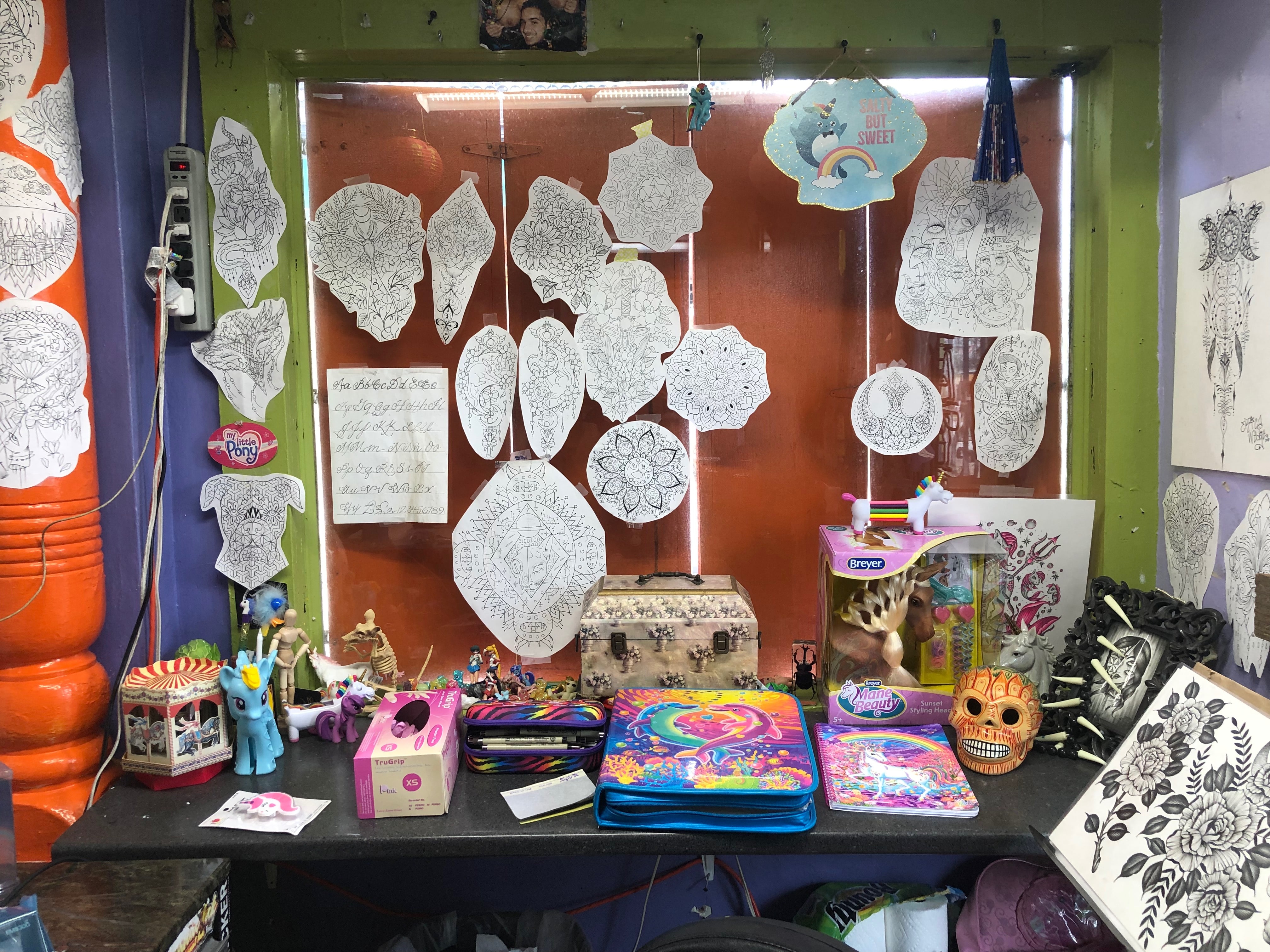 “You’ve got to be. I’ll draw a piece two or three times until it feels right. I don’t know if it’s that I’m not that good or that maybe I want perfection. I’m old school. I’m particular. I want to do things the best that I can, then some person might come along and do a little twist and make it even better. Back in the day, in the 90s, when I was training youngsters, we would all work together and, I’ll tell you, we did some of our best work. Everybody put a piece into the pie. Even when you go to college, that’s what they do there. When they critique your work, it makes it better.”

There’s nothing like a good editor, but do you find that sometimes people over-critique?

“A lot of times, being a woman and you’re working with guys (or even other women), they’ll be picky. They’ll do unnecessary picking, not adding creative thoughts. Back then, women didn’t tattoo too often, and in my experience, women are more caring, they’re more particular. They want to get it right, so it’s changing things. In the era that I came through, half the people, they just did tattooing for money. Many of them had been in prison, it’s where they get their background from. (Some of these people are excellent artists, I may add, but their mentality is different.) A lot of people in tattooing are characters. They’ve been to prison and they brag about it. I’ve been to jail one time and that was more than enough for me.

Tell me about your tattoos.

“My tattoos were done by some of the best. Ed Hardy did my first tattoo in ‘79. To be honest, I didn’t even want it, but I thought if you do tattoos, you should be willing to sacrifice your body to get tattoos. My right leg was tattooed in my 30s and 40s. My left leg was tattooed in my 50s and 60s. I’m getting one final one, of my parents, when they were young, on my left hip. I have to wait for my hip replacement surgery to heal and then that’s it. That will be the last. I have never let anyone do a tattoo on me because they were bored but that happens in shops. Some of the best tattoo artists have some of the worst tattoos. It just kills me that they wouldn’t go out and seek the artist that they think is best for them and just pay the money. It’s worth it because you learn so much. That’s how I learned to tattoo, by going to the best in the business, talking to them, and when you come back, you’re so excited and enthusiastic and you know new things.”