Sure Carnival is starting, but it’s time to pull out your history books!

But the Twelfth night of what? Good question, and that’s where some get a little hazy, so let’s back up for a second.

In many parts of the world, Twelfth Night and the Christian holiday, Epiphany, are synonymous. So the real first question is, “What’s Epiphany?”

Well, it marks the day that the Three Wise Men (a.k.a the Three Kings) — who had been following the path of a mysterious star for several days — were finally led to the recently-born baby Jesus.

A momentous occasion, for sure, but where does the number 12 come in? Well, it just so happens he was 12 days old when they found him.

It all depends on when you start counting. Half the world — in places like England — include Christmas Day. The other half of the world — including America — begin counting the day after Christmas.

That method of counting brings us to January 6! And, stretching 51 days — while it can’t match last year’s Fat Tuesday in March — Twelfth Night is still signaling the start of a relatively long Carnival season! While most of you are probably aware that Twelfth Night in New Orleans is celebrated in a variety of ways, you may not be aware of the history behind those celebrations.

So here’s a brief look at three common ways we commemorate the start of this most wonderful time of the year, as well as what’s going on in the city this Jan. 6.

We bake cakes with babies in them

Twelfth Night marks the first night we’re allowed to eat king cake. Sure, you can probably find one today if you look, but eating it is at your own risk, and doing so exposes you to the kind of public shaming typically reserved for those who wear seersucker after Labor Day. 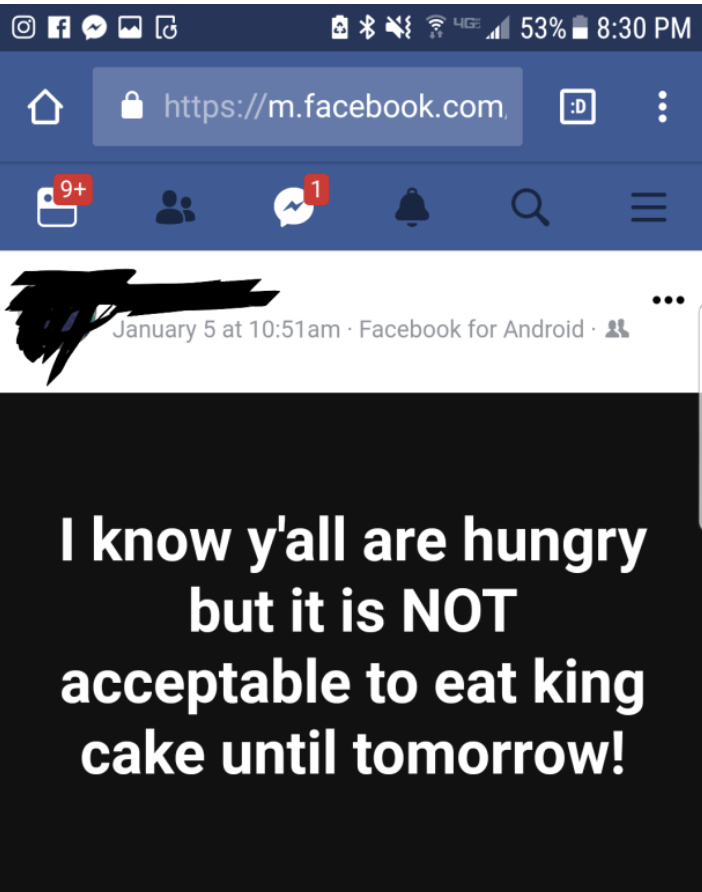 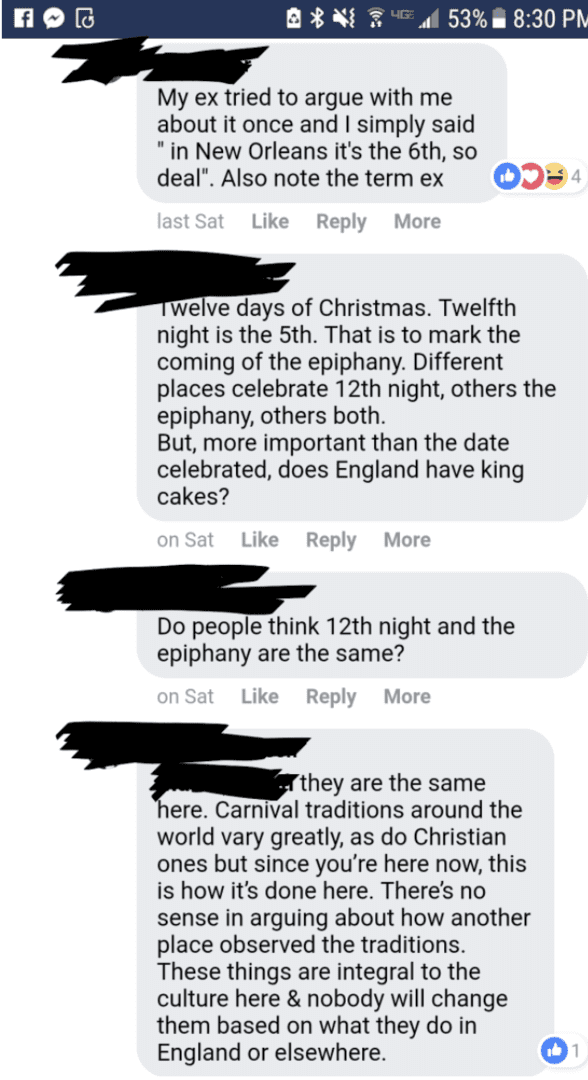 But where does king cake even come from?

As early as 6th Century BC, pagans in Greece were using beans as a tool for tallying votes during elections. By 217 BC, Roman children — at the end of their winter solstice festival, Saturnalia — drew lots with beans to determine who would be king.

Interesting… but what does this have to do with king cake?

Christianity officially began celebrating the Feast of the Nativity for 12 days beginning in 567 AD, and Epiphany was second in importance, only to Christmas Day, itself. In England — both among royalty and commoners — Twelfth Night feasts included a large cake, called “Twelfth Cake,” that had a bean hidden in it (told you the bean as important!). Family and friends were assembled, the cake was divided, and whoever picked the piece containing the bean was accepted as king for the day, called “King of the Bean.” Occasionally a pea was also hidden, and whoever found the pea would be crowned queen.

The French had a similar tradition, resulting in the proverbial phrase for good luck, “Il a trouve la feve au gateau,” — “he has found the bean in the cake.”

Today the tradition remains largely the same. We call it a king cake — after the Three Kings — and we often decorate it in three different colors (green, purple and gold) to commemorate them.

Of, course, there are a few minor differences between past seasons and today’s. Finding the figurine of baby Jesus in your slice of cake is hardly as warmly welcomed in modern New Orleans as discovering a bean in ancient Rome.

“Ow, my tooth!” the unsuspecting guest pulls the plastic toddler out of her mouth.

“Ohhhh,” an obnoxious partygoer points, “Tammy got the baby! That means she has to bring the next king cake!”

“Are you kidding me?” Tammy sulks, massaging her jaw. “I already bought this one. I don’t have this kind of money.”

If you got the last baby in Mardi Gras 2019 (or if you’re just a very nice person), you know there are tons of spots around NOLA to grab your king cake. I recommend Bywater Bakery’s 4th Annual King’s Day King Cake Kick-Off. The bakery opens at 7a.m., but the party starts at 11 a.m. with live music that lasts well into the evening. Music includes the Klezmer Allstars and the Pinettes Brass Band, and there’ll be many varieties of their renowned king cake for purchase by the slice or full cake. Flavors include a regular variety, chantilly, bouille, cheesecake, azul dulce blueberry, raspberry truffle and several more. And don’t miss out on their three types of savory king cake. (If you feel passionate about whether or not savory king cake is actually king cake… check this out.)

Beginning at 6:30 p.m., the Phunny Phorty Phellows will gather with costumes and instruments at the Willow Street streetcar barn near Carrollton Avenue. At 7 p.m., they board the streetcar and head down the St. Charles Avenue line to “herald the arrival of Carnival!”

But it wasn’t always this way.

The Phunny Phorty Phellows began way back in 1878, and their slogan, “A little nonsense now and then is relished by the best of men!” positioned them as something different than the more serious, traditional parades of the time. From then, on and off until 1898, the PPP followed Rex, prompting one historian to call them, “The Dessert of Mardi Gras.”

Unfortunately, there was no dessert for the next 83 years, from 1898, all the way until 1981, when a group from Krewe of Clones (who claim credit for Krewe du Vieux), revived the Phunny Phorty Phellows tradition by ending Mardi Gras.

The following year, however, their role in Carnival changed to what it is today: rather than signaling its end, they kick it off.

In a season known for king cake, maybe there’s nothing wrong with eating dessert first!

At the same time the PPP start their streetcar journey the 12th Annual Joan of Arc Parade will begin winding its way through the French Quarter.

If there’s anything related to Twelfth Night that began in New Orleans, surely parading would be it, right?

Some more characters from the Krewe of Joan of Arc Parade, the first parade of Mardi Gras.

In early Christian Rome, a hideous figure, known as Befana, paraded the streets each Epiphany. Roman children, upon going to bed, hung up a stocking, which Beffana was found the next morning to have filled with cakes and sweetmeats, if the children had been good, but with stones and dirt if they had been naughty!

But who was Befana?

Once again, it always goes back to those dang three wise men.

They were on their search for the newborn savior, and — while passing through a town at night — they learned Befana was considered the best housekeeper in the village. They stopped in at her home, and asked if they could stay for the night. She said, sure! But when they asked if she happened to see the baby Jesus, she said, nope!

The next morning, the three men — impressed with their housekeeper’s work — asked Befana if she wanted to join them on their quest to find the son of God. She declined, however, citing a backlog of housekeeping.

“Hi, do you want to come with us to meet the Lord and Savior?” I imagined the wisest man asking.

“No, I have to clean the baseboards,” Befana scoffed with a hand on her hip. “If I don’t do it, no one will.”

Legend has it that, that night, it occurred to her that she may have made a poor decision. Befana tried to find the three wise men again, but was unable. To this day, she is still searching for the baby Jesus, leaving treats (or dirt) on Twelfth Night for kids as she passes by.

Parades have featured Befana since the days of early Christianity and continue to do so today In Italy, and in many Italian communities around the world.

But the practice of parading on Epiphany has spread even farther, right here to New Orleans, and, even though this is only the 12th year of the Joan of Arc Parade, the first Twelfth Night parade was held back in 1870 by the Twelfth Night Revelers, a group that still exists today.

A writer for The Daily Picayune described the scene of its second parade — an ode to nursery rhymes — in an article from 1871:

“How joyfully the children looked at the fairy spectacle; how merrily did they laugh, and how gleefully they shouted when before their eyes passed the real heroes of the simple stories to which they had always so attentively listened. And older folks imagined themselves, again little children with hearts undisturbed by the world’s troubles and life’s cares.”

Think to your favorite Carnival parade and you might notice a similar atmosphere.

The article goes on to explain nearly every passing character, from Humpty Dumpty and his wagon of brooms to Mother Goose and her fond children, to sweet little Bo-Peep “in the barb of a shepherdess,” and Jack and Jill “going for water as it were.”

This Monday, 148 years later, the Twelfth Night Revelers will meet downtown to continue their longstanding tradition. By 1880, they were no longer parading, but they have held a ball every year since they began, and some of their traditions will feel familiar.

When you pick up your king cake in the morning, the past queens of the Twelfth Night Revelers will meet at Antoine’s for their annual luncheon. As you bring the king cake to your Twelfth Night party, the Revelers’ Lord of Misrule will ride through the French Quarter on horseback, making his way to the ball at the Ritz-Carlton Hotel.

When you watch the Phunny Phorty Phellows buzz by on their streetcar, the Revelers’ costumed junior cooks will be handing out programs to guests, and when you’re watching the end of the Joan of Arc parade, cooks at the Ritz will roll out a giant cake — one hiding a golden bean — and they will distribute slices to the young ladies at the ball, one of whom will become queen.

A lot has changed over the centuries. It’s equally amazing how much has stayed the same.

What Else is Happening Around Town

Besides the more traditional events, listed above, here are a few other parties you’ll be able to find around town: