‘Icy Treats for a World on Fire’

There is a new snoball stand in town, and it is making quite a splash in the Bywater neighborhood.

Chance in Hell Snoballs opened this summer for its inaugural season and people are already raving about this new player on the snoball scene.

Plan your visit ASAP so you have ample time to make numerous trips and try multiple flavors before snoball season comes to an end at the end of October.

If you are like me, you will become obsessed with trying as many creative, artisan, small-batch flavors as possible from this new New Orleans experience.

I stumbled upon this hidden gem by pure chance on a sweltering Sunday in August.

I was trapping stray cats in the Bywater for TNR (trap, neuter, return). The traps were set, and I was biding my time to see if I would catch any kitties.

I noticed a small sign on a telephone pole. The sign pointed me towards the corner of France and Burgundy tempting me with “Icy Treats for a World on Fire.” 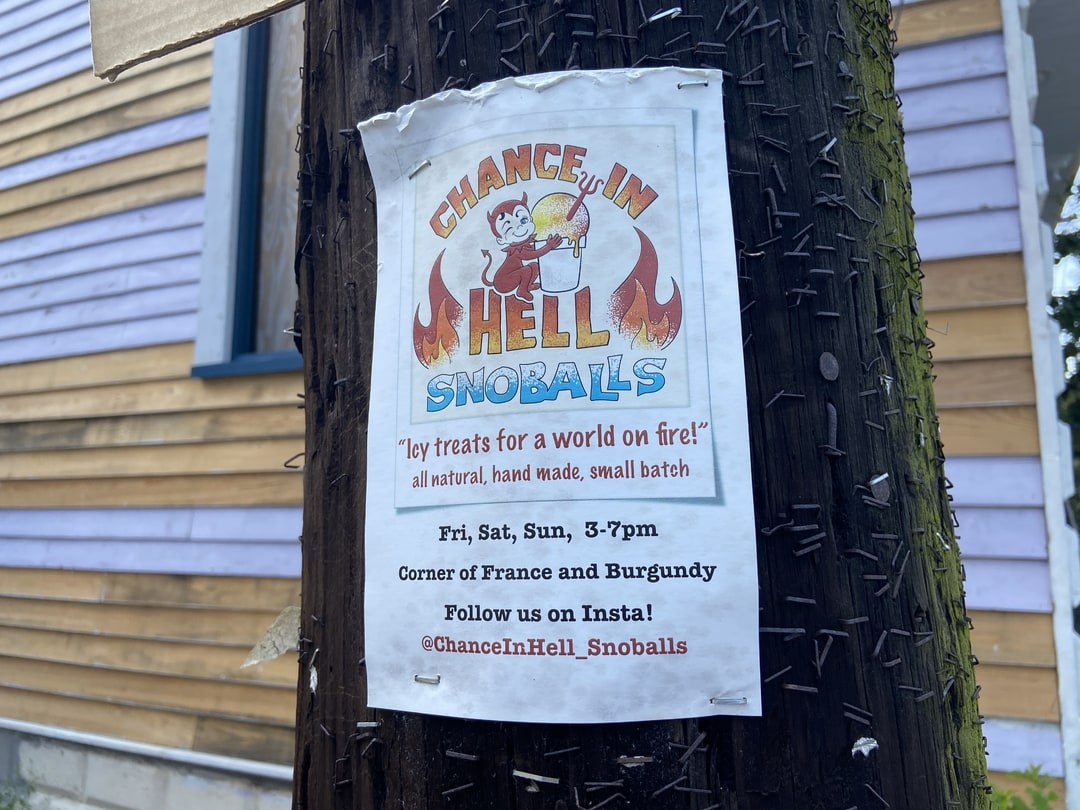 When I arrived, there was a (masked and socially distanced) line around the block!

After a few bites of my vegan Pistachio Cream snoball, I was hooked! Within hours of getting home, I was already making plans to return the following weekend to try more flavors.

What Makes Chance in Hell so special?

There are a lot of things about Chance in Hell Snowballs that set it apart from the many other wonderful snoball stands in New Orleans. 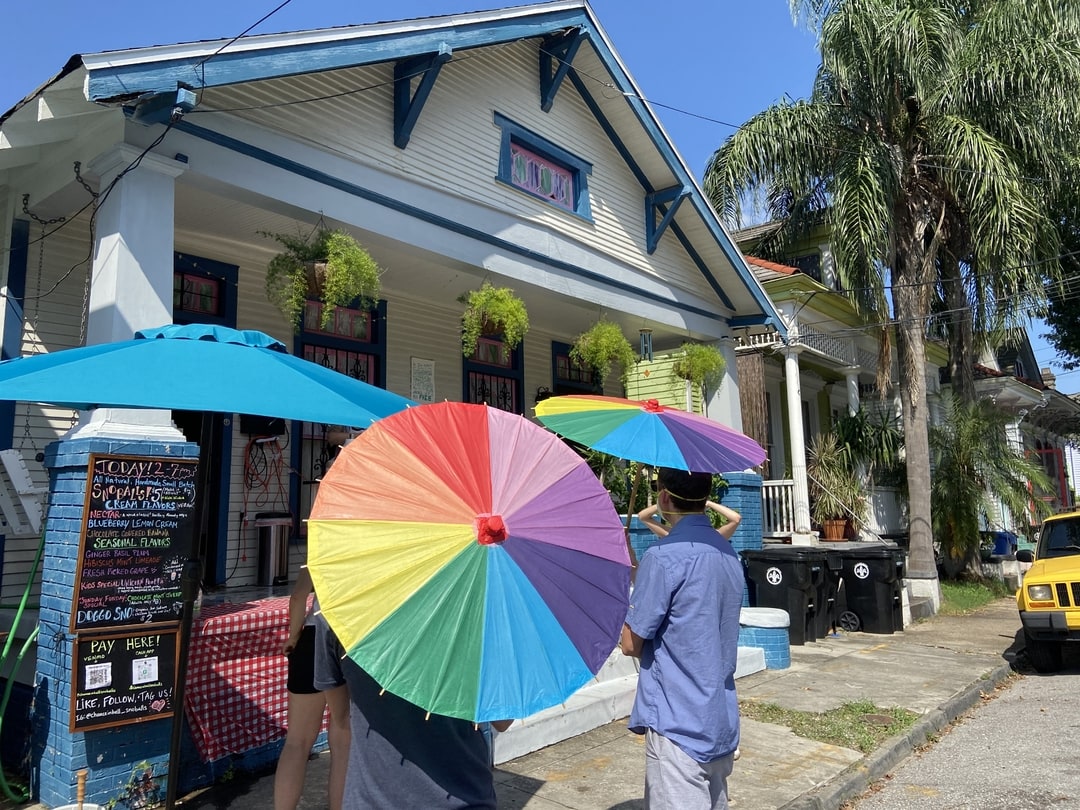 Socially Responsible Snoballs – One thing that is exceptional about this business is the fact that it is so ecologically and socially aware.

Right off the bat, you will notice a sign indicating that nearly all of the flavors are vegan, including the cream flavors. This is because they use coconut cream instead of dairy!

Another sign indicates that absolutely everything in your hand is compostable. They provide a compost bin for easy disposal. 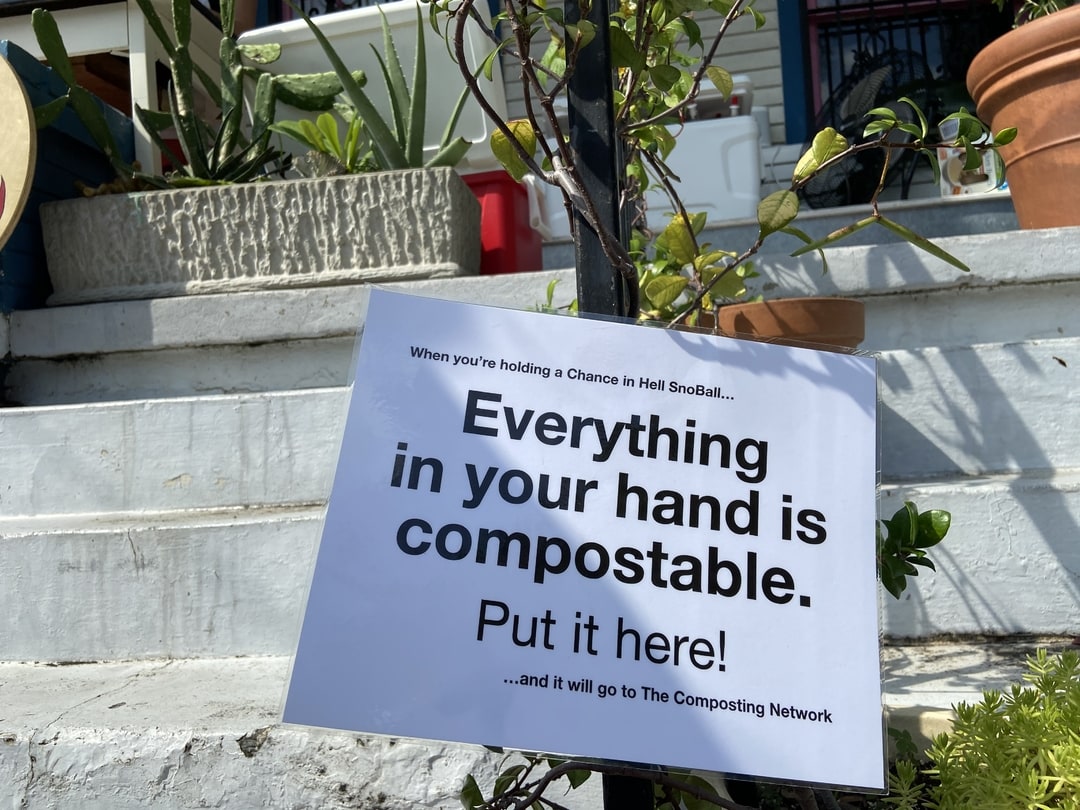 When asked about this element of the business, the owners Kitten and Lou said, “We love New Orleans traditions like parades, go-cups, and snoballs. But unfortunately, a lot of those traditions create a ton of waste that will be around forever. We wanted folks to be able to enjoy one of their favorite NOLA summer rituals without the guilt of adding to an ever-increasing environmental crisis … so we use 100-percent compostable cups, spoons, and straws. It costs more, but we feel it’s so worth it, and our little wooden spoons are so cute!”

The snoball stand also picks a local charity each week and donates a percentage of their tips and proceeds. Some beneficiaries include: Feed the Secondline, House of Tulip, and NOLA City Waste Union. 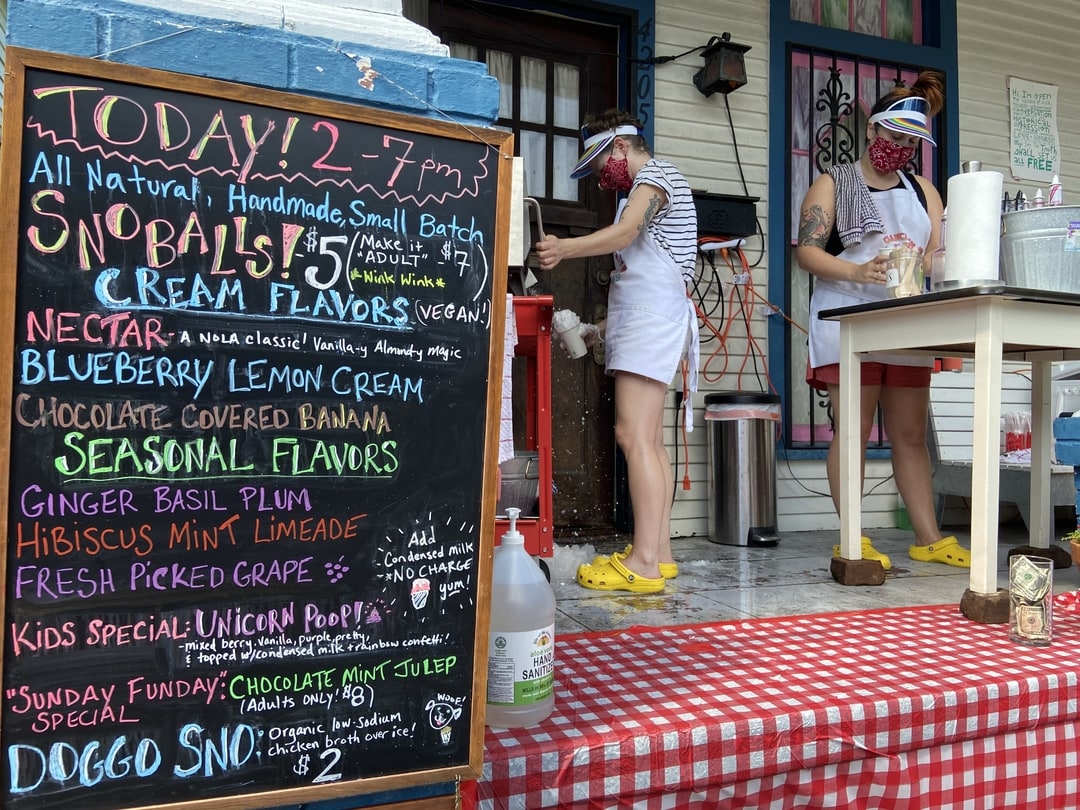 Dog and Family-Friendly – As an added bonus, Chance in Hell Snoballs is a great outing for the whole family — even the furry members.

Kitten and Lou have created a special kid flavor called Unicorn Poop! Unicorn Poop is a combination of “mixed berry, vanilla, purple and pretty.” It is topped with condensed milk and rainbow sprinkles.

They also have “Doggo Sno!” Doggo Sno is organic, low-sodium chicken broth drizzled over shaved ice. I saw a couple of pooches enjoying Doggo Sno and they looked like they were the happiest pups on the planet.

Kitten and Lou’s two Chihuahuas, Monty and Carlo are the official mascots of Chance in Hell Snoballs. They are generally supervising operations from the porch when they are not too busy curating their own Instagram account: @montycarlopups.

The Flavors are Out of this World – The creative, seasonal flavors really set this snoball stand apart from the crowd.

Their menu changes weekly. Their recipes are inspired by what is seasonal, what herbs are growing in their garden and what they can get from local growers. They love to create their own spins on popular desserts.

The thrill of the surprise is part of the experience at Chance in Hell Snoballs. You never know what amazing flavor you might get next. 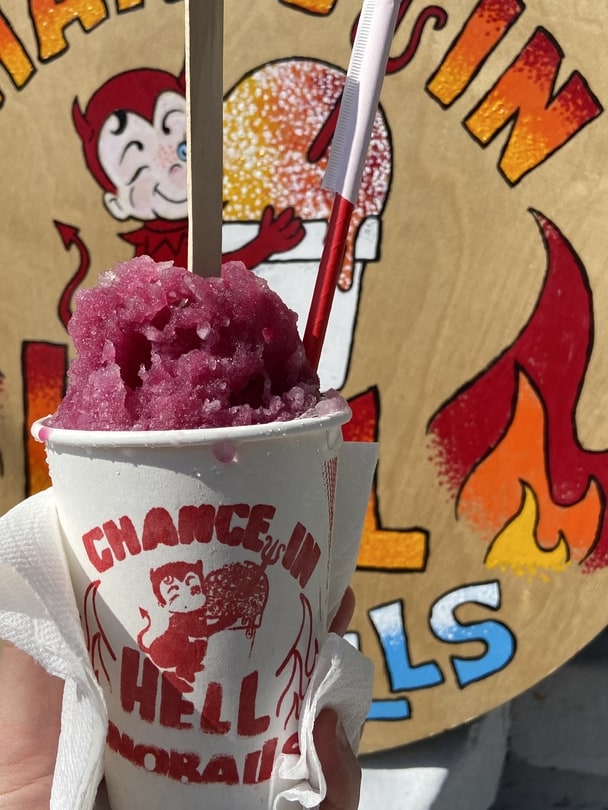 Adult Snoballs – You always have the option to make your snoball “adult” (wink, wink) for an extra $2. If you have ever wondered what it would be like to have a boozy snoball, wonder no longer! You can add a sploosh of vodka, tequila, or various other bar beverages to any snowball on the menu—if you are 21 or over, of course.

There are additional Sunday Funday alcoholic specials on Sundays including Frose, Sazerac, Aperol Spritz, and Negroni.

The Origin of Chance in Hell Snoballs

Chance in Hell Snoballs is owned and operated by Kitten and Lou. They are a married couple who were full-time touring performers in the drag and burlesque world pre-COVID.

They said, “We used to joke that if we ever got tired of performing all over the world we’d open a snoball stand in our Bywater neighborhood, and well… the universe intervened, all of our work is canceled for the foreseeable future, so here we are!”

They added that, “It’s been so great during these strange and difficult times to have something that keeps us busy and creative and lets us see our neighbors (socially distanced and masked up of course.)”

Plans for the Future

So, what is coming next for Chance in Hell?

Kitten and Lou are talking about A Chance in Hell food truck to bring their frozen goodness to other neighborhoods. They may also start doing more pop-ups in partnership with local businesses, bars and restaurants. The duo said Chance In Hell merch will be available soon.

Keep an eye on their Instagram for updates and of course hints about the latest flavors @chanceinhell_snoballs.

Chance in Hell Snoballs USUALLY pops up Friday-Sunday from 3 p.m.-7 p.m. on the corner of France and Burgundy streets. Hours and pop-up location are subject to change, so follow them on Instagram for updates.