Parting this lounge is such sweet sorrow

Capulet brings a fresh, modern multipurpose space to the Bywater, easily changing faces from a bar to an elegant venue with little effort.

While Capulet itself is fairly new, opening just nine months ago, the building it’s housed in has a storied history. According to owner Steve Nutting, the space started out as a cotton warehouse in the 1800s, before being a furniture emporium for most of the next century. Then, after Hurricane Katrina hit, the building became a damsel in distress.

“In 2012, the front wall of the building, it was a brick wall, collapsed into the street,” Nutting explained. “The city sent bulldozers down to tear down the building.

Neighborhood residents, who appreciated the brick walls of the historic building that butted up against their properties, found out about the city’s plans and weren’t too pleased.

“They climbed into the rubble to prevent the building from being torn down,” Nutting said.

Alas, the building was saved, and after four years of renovations, it was reopened. Nutting came into the project as part owner of the neighboring co-working space, The Warehouse. When deals to make use of the other side of the building fell through, talk of a restaurant surfaced, and the Capulet was born.

The name actually started out as a joke during a brainstorming meeting, but the more owners mulled it over, the more it made sense. The name didn’t have the comical vibe of your usual sandwich shop, but it was wasn’t as stuffy as the names many event venues take on.

“We are right off of Montague Street,” Nutting said. “ I was just kind of looking back at the story of Romeo and Juliet and there were so many parallels. For example, you’ve got old Verona, the town where Romeo and Juliet were from, but you’ve got this young couple. Chris and I are relatively young, definitely young in the restaurant business, so it’s kind of a juxtaposition. We’ve also got this balcony, there’s a mezzanine, we’ve got a roof deck. Capulet space is where Romeo and Juliet met, at a masquerade ball. And we host these events that are lifetime events, significant events in people’s lives.”

Christopher St. John is a part owner, but as the chef, he’s the creative force behind Capulet’s menu. The food has twists on old favorites and even features vegan-friendly fare.

“A lot of them are drunken inspired,” he said, laughing. “Like the kim chi BLT, which is maybe one of our signature dishes. I was out getting some drinks, and I had a BLT on the way home. It was terrible and disgusting, so I just piled a bunch of kim chi on it, like, ‘Oh ok, we can elevate it.’ The Bloody Mary beef sandwich is the same thing. I had a few drinks and was wishing I could have eaten My Bloody Mary, and I was, like, ‘Let’s run with that.’”

The modern aesthetic and open spaces of the bar make it a perfect place to get some work done if you’re looking for a change of pace for the day.

“That’s why we have these lounge areas, and we do bottomless coffee,” St. John said. “So you pay $3.50 for your cup, and then if you’re here all day, you can drink coffee all day.”

St. John said it was important to make a space where the community could function and feel safe.

“I came down here and fell in love with New Orleans at J&J’s, which is 10 blocks down the street,” he explained. “That’s truly where I fell in love with the city. It wasn’t Bourbon Street. My first New Year’s here, in 2013, I just went back to the bar at 7 a.m. and everyone that I had run into was all there. I was just like, ‘Man, this place is special.’ To me, it’s all about the community.”

Capulet has been the site of fundraisers for the Sneaky Pickle, a restaurant that recently had a fire, and an LGTBQ Winter Wonderland fundraising ball.

“We want to do one of those every month, find charities that we really want to partner with,”Nutting said.

Having lots of creative space and different activities happening all the time is one of the things that makes Capulet different.

“You can come here Wednesday morning and go to yoga class and Thursday night you can come here, and there’s live music and you can have a cocktail,” St. John said. “I don’t think there’s a ton of spaces that serve that many different facets.” 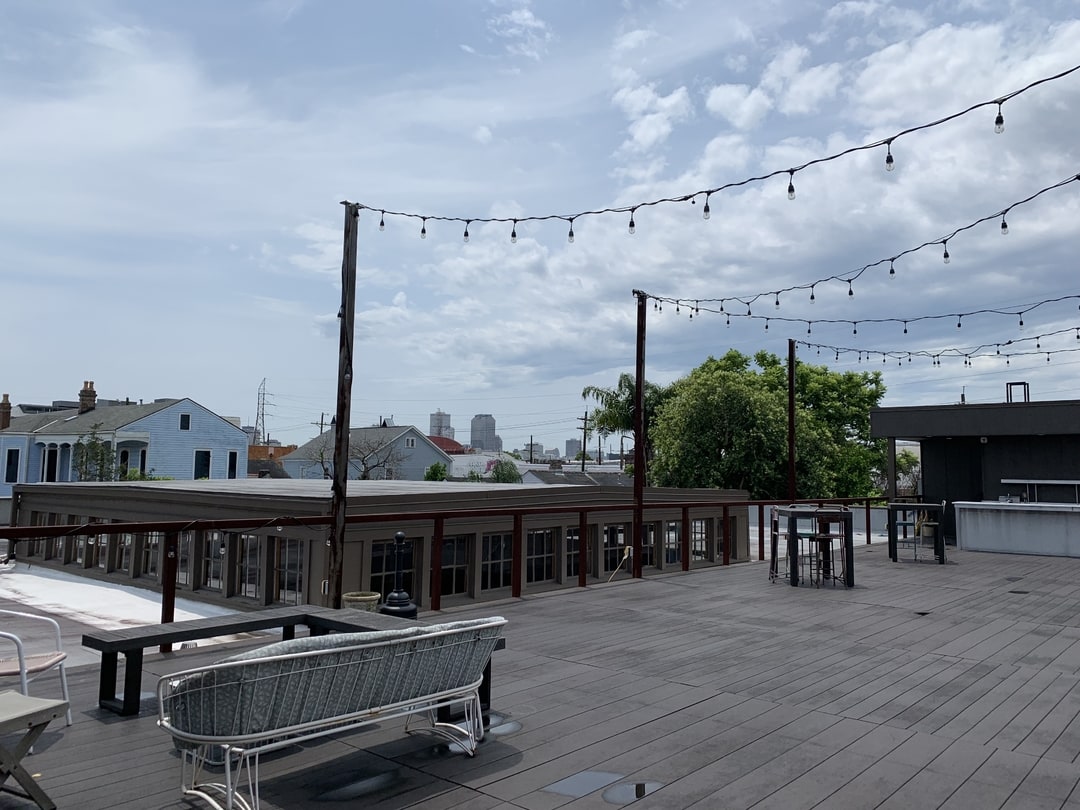