Windowsill Pies are a sweet dream made of flaky crust, who are we to disagree?

As we slide into the holiday season, after the crazy year that was 2020, one thing is sure to salve our weary souls: pie. Windowsill Pies, located at 4714 Freret St., is New Orleans’ only brick-and-mortar pie shop- offering sweet and savory pies whole and by the slice, as well as baby pies and hand pies. That’s right, Windowsill Pies is here to make all of your pie dreams come true.

Eiden first moved to New Orleans in 1999, from Columbus, Ohio, to attend film school at UNO. Dupré hails from the North Shore and moved to New Orleans, where she earned her B.A. from Tulane. From there, Eiden worked at restaurant Stella and enjoyed baking at home, while Dupré attended the California Culinary Academy in San Francisco.

Dupré returned to New Orleans and worked as the pastry chef at Bayona and then in the bakery at the Uptown Whole Foods for three years. During this time, Eiden was coming up with a plan. In 2011, she called Dupré with an idea to bake pies.

“I was feeling limited, so I started baking pies,” Eiden said. “I had an idea to maybe turn it into a business, so I called Marielle and she was immediately on board. She didn’t even have to think twice!”

In September of 2011, Eiden and Dupré started baking pies in Eiden’s home kitchen.

“We were baking pies non-stop, to the point where there would be butter all over the floor,” Eiden explained. “We made arrangements with people and they would be picking up pies at all hours.”

From there, the gals went on to offer their pies at the Covington Farmers Market, an outdoor market that offers everything from homegrown produce to honey and wine.

They then heard that the Whole Foods on Broad Street. had an opening for local products. Eiden and Dupré decided to take a chance, and they were chosen to sell their pies at the store.

“Whole Foods got us a lot of recognition,” Eiden said. “They had a poster up of Windowsill Pies, and people were getting to know us. They started telling us what types of pies they wanted and we were happy to make them. That’s how we started making hand pies- people suggested them.”

As the business grew, so did the need for space.

They settled into a commercial kitchen, owned by Darryl Reginelli of Reginelli’s pizza, where they were able to store things and, most importantly, bake pies from 2015 to 2020.

Success came and the business grew. In 2016, Eiden and Dupré applied for and received a Woman Entrepreneur Fellowship from the Junior League. Their Windowsill Pies business pitch was picked over 30 other competing businesses at New Orleans Entrepreneur Week. The win allowed Eiden and Dupré to build a website for their business and the contest also paid for a trademark.

Also in 2016, Windowsill Pies went to the national stage, when Cooking Channel flew Eiden and Dupré, to Toronto, to compete on the pie episode of Sugar Showdown. Facing off against two other teams, Windowsill Pies won $10,000 in the competition, after bowling over the judges with their Dark Chocolate Mandarin Caramel Pie, complete with a chocolate orange crust.

In 2019, Windowsill Pies’ Lazy Summer Strawberry and Cream Pie, a pie piled high with bright red Louisiana strawberries and filled with a chamomile cream cheese mousse, was named the “official” pie of the Broadway in New Orleans production of the musical, Waitress. They were awarded the honor after beating out competitors, Gambino’s Bakery and Haydel’s Bakery.

While building a loyal customer base and acquiring success, Eiden and Dupré knew that they wanted more.

“There was a limit to growth, so we knew we wanted a shop,” Eiden said.

Finding a space was tough. They had their eye on the location that would eventually become Windowsill Pies, but there were bumps in the road.

“We saw this place in February of 2019, but it fell through, Eiden said. “We then looked at another place, but this spot became available again in September of 2019, so we jumped on it.”

She continued, “We like being on Freret Street, because we feel like it’s accessible, no matter where you are in the city.”

The gals worked hard and did a total buildout on the building, but their original opening timeline kept getting pushed back, due to the government computer hack and the pandemic.

“Because of the pandemic we worked completely separately, for a few months,” Dupré said. 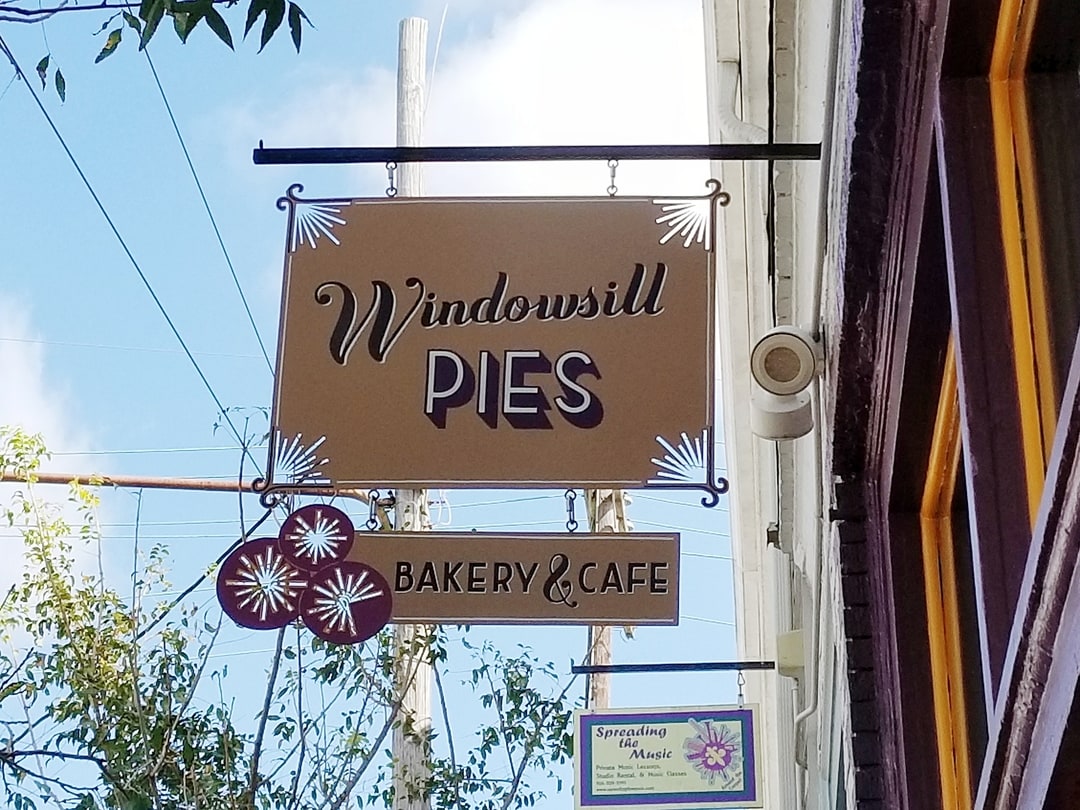 Dupré described the pie as a new take on the classic pecan pie.

“I wanted to reimagine the pecan pie with more flavor,” she explained. “I make it with Maker’s Mark, Steen’s Cane Syrup and local honey. There’s no corn syrup in it and the flavor is more than just one note.”

Other sweet selections include holiday favorites such as amaretto pear and dried cherry, gingered pumpkin tart with candied pepitas, and a dark chocolate peppermint tart.

The shop is unique in that they also offer an assortment of savory pies. A shop favorite, Herb-Scented Chicken Pot Pie, is offered every Wednesday and takes three days to make. When I tried this pie, it reminded me of delicious comfort food. The chicken is tender with a nice balance of savory veggies and the crust is nice and thick, holding it all together well. 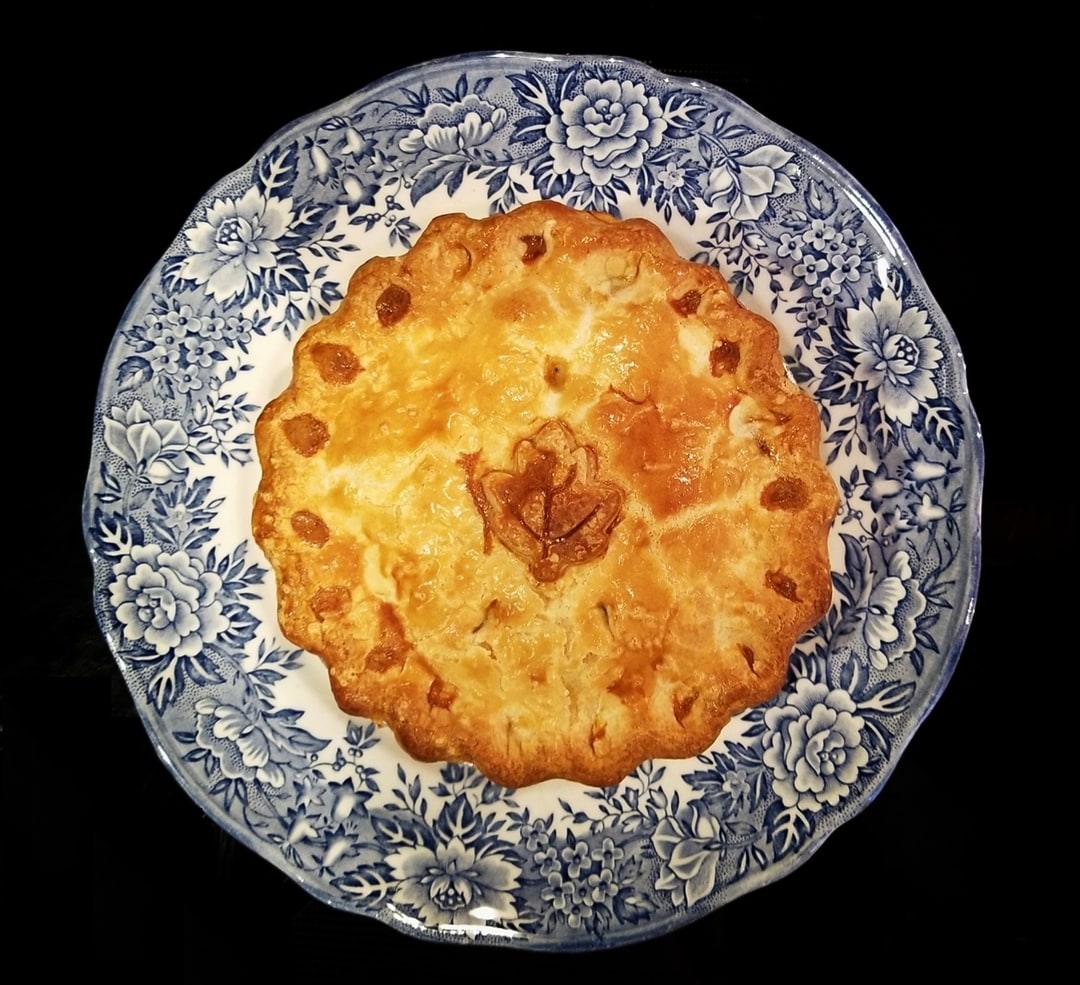 The shop’s menu is ever-changing and daily offerings can be found on the shop’s Facebook and Instagram pages. Pies are made with fresh, local ingredients and are seasonal. If you don’t see a pie that you crave, keep checking back at the shop- there’s a good chance the gals will have it for you when it comes back into season.

Windowsill Pies is currently open Wednesday through Sunday, 7 a.m. to 4 p.m., with the hopes to eventually extend hours into the evening, and possibly serve alcohol. Because of COVID-19 restrictions, only outdoor seating is available, but that will change as soon as New Orleans eases the restrictions on indoor dining.

The collaboration with Coast Roast was an easy choice- Eiden and Dupré first met owner, Kevin Pedeaux, during their time at the Covington Farmer’s Market. He became a guide during the gals early days of opening their business.

“Kevin has been great at giving us advice, helping us figure out what to do and what permits we need,” Eiden said. “He’s been a big help and we’re excited to offer Coast Roast Coffee to go along with our pies!”

Because pie is always a good idea, I’ve visited the shop quite a few times since it opened. Two standout favorites are the warmed Croque Madame hand pie, and the strawberry chocolate hand pie. Both pies are delicately made and the flaky, buttery crust is delectable perfection.

Unlike another famed, sweet hand pie that New Orleanians love, these hand pies are baked and not fried, adding to the light, airy texture of the pastry.

Eiden and Dupré offer all of their pies for every occasion, including weddings, and accept large orders for other occasions and as gifts. There are whole pies available in the case, or you can order on the shop’s website www.windowsillpiesnola.com.

Eiden and Dupré’ want their pie shop to become a part of the New Orleans food landscape. Windowsill Pies’ motto, “Every slice in an opportunity to create and share a lasting memory with others” reflects their goal of bringing people together and becoming a local daily stop.

“We want to be a part of people’s routines,” Eiden said.